Let your kids look through these new chapter book reviews and see what grabs them. Will they want to read a fantasy or mystery? What kind of characters do they like? Remember that choice is so important to give kids ownership over their own learning — especially in reading. Of these 14 new and notable chapter books for summer reading, I hope you consider Pip Bartlett, Unusual Chickens, and Unicorn on a Roll. (P.S. Did you grab my free reading downloads for summer?)

Pip Bartlett’s Guide to Magical Creatures by Jackson Pearce and Maggie Stiefvater FANTASY ages 8 – 12
If you like mythical creatures, independent thinkers, and mysteries, you’ll love this first book in the Pip Bartlett series as much as me. Pip’s world is just like ours except for one significant difference — magical creatures exist and often are pets! Pip gets to help her Magical Creatures Vet aunt Emma over the summer vacation when a city-wide infestation of Fuzzles occurs. And since Fuzzles burst into flame, and love underwear drawers, Pip determines to find the reason for the Fuzzle infestation before the exterminators arrive. Along the way, you’ll learn about vain unicorns, talking miniature griffins, and the carnivorous Glassfish (among other species.) Pip Bartlett sparkles with magic and adventure and will enchant your summer reading! (It’s on the easier side of chapter books, maybe 2nd / 3rd grade level.)

Shivers! The Pirate Who’s Afraid of EVERYTHING by Annabeth Bondor-Stone & Connor White ADVENTURE ages 6 – 9
Poor land-locked Shivers. He’s terrified of everything, especially snails. But when his sea-faring family of pirates is captured, Shivers is their only hope for rescue. Luckily he meets the daring and adventurous Margo who gets them off of dry land, teaches Shivers about sword fighting, and helps him find and rescue his parents. This book is very comical and will keep your kids thoroughly entertained. (I’d guess this is at a 2nd grade reading level.)

From the Notebooks of a Middle School Princess by Meg Cabot REALISTIC ages 8 – 12
I enjoyed this classic (all be it predictable) story of a regular girl who finds out she’s really a princess. It’s a lovely real-life fairytale happy ending story and the start of a new easier chapter book series by the author of The Princess Diaries. And, I liked that the main character was half African American.

The Stars of Summer by Tara Dairman (Sequel to All Four Stars) REALISTIC ages 10 +
Gladys summer vacation is off to a dreadful start when her friend, Charissa, surprises her with free tuition at her family’s summer day camp. How will Gladys get her restaurant reviews written for the paper? She faces sabotage, the ups and downs of friendship, and problems with her parents being in the dark about her new profession. (I loved that at the end, she decides to come clean!) A worthy, well-written sequel.

The League of Beastly Dreadfuls by Holly Grant, illustrated by Josie Portillo FANTASY ages 8 – 12
One day at school Anastasia learns of her parents death by two mysterious great-aunts who whisk her away to their authentic (no electricity) Victorian home in the middle of the forest. She’s made to clean all day and is constantly starving. But things are not as they appear, like the mysterious boy wearing a bird cage who might not dangerous at all, or the hidden room with delicious desserts and photos of children that only the aunties can use. This is an unforgettable adventure of smart and capable children who fight against evil and prevail.

Twintuition Double Vision by Tia and Tamera Mowry REALISTIC-ish ages 8 – 12
I had my doubts about this book. (Just because you’re a celebrity, doesn’t mean you can write – or find a good writer to write for you.) But I read it since it had diverse characters and was quite impressed! The story focuses on identical twins living in a new town who experience flashes of precognition when touching some people. There’s conflict between the duo and challenges around being at a new school. Then, when their policewoman mother faces a serious problem, the twins use their abilities to save her from scandal. Twintuition is a quick, enjoyable summer read and they’ll be more books to come. (This is probably about a 3rd grade reading level.) 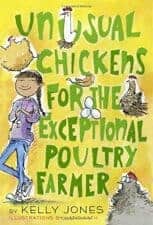 Unusual Chickens for the Exceptional Poultry Farmer by Kelly Jones, illustrations by Katie Kath REALISTIC-ish  ages 8 – 12
Honestly, I could care less about chickens — unless they have magic — which the chickens in this story do!! In fact, loved this book so much it’s one of my summer favorites. The book is written as letters from a girl named Sophie, who is newly living at the farm of her dead great-uncle Jim. She writes to her dead abuelita, her dead great-uncle Jim, and Agnes of the Extraordinary Chickens catalog. While her parents are figuring out their new lives, Sophie figures out the farm. Specifically the chickens — starting with the first one she discovers wandering around. She learns that Jim had more than one chicken, and they are quite exceptional! (Think telekinesis, invisibility, and carnivorous chicks.) But a neighbor chicken thief is also interested in Jim’s chickens — and Sophie must stop her. Even if it means entering the town’s poultry show. Unusual Chickens has exceptional writing, characterization, and plot! 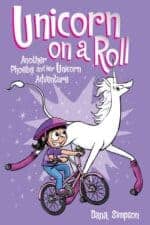 Unicorn on a Roll by Dana Simpson HUMOR ages 8 – 12
Remember the vain unicorn Marigold Heavenly Nostrils from the book, Phoebe and Her Unicorn? The two friends are back in this hilarious sequel with more funniness and fantastic growing-up poignant life lessons. My kids and I adore these characters and love this new book. It’s one we’ll read over and over again. 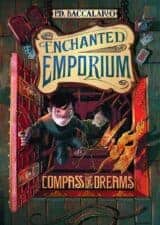 Enchanted Emporium Compass of Dreams by P.D. Baccalario FANTASY ages 8 – 12
Although this book is from last summer, I just recently read it to see if I would like the series. (This is the second book in the series.) And I did like it! I loved the setting in Scotland and the characters — the magical Enchanted Emporium shop’s daring young Aiby Lily and the likable but ne’er-do-well Finley. Together the pair determine to rid their town of the sheep-stealing, soul-taking Green Man. 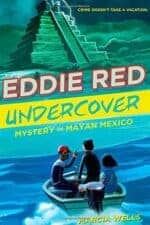 Eddie Red Undercover Mystery in Mayan Mexico by Marcia Wells MYSTERY ages 8 – 12
I’m so impressed with this book, the second in the series. It’s an action-packed mystery filled with adventure and lots of español. Eddie, his best friend Jonah, and his parents are on vacation in Mexico. When their new friend Julia’s family’s Mayan mask is stolen from their hotel, an Eddie’s dad is a suspect, Eddie and Jonah decide to solve the mystery themselves. Only they don’t speak Spanish all that well, and there’s more to this mystery than just a stolen mask to they team up with their new Mexican friend. You’ll love the Spanish words throughout, the well-paced action, and the characters. also see: mystery books for kids

Stonebird by Mike Revell MAGICAL REALISM ages 8 – 12
New to the town to take care of their grandmother, Liam is not happy, and neither is his mom or his sister. When he discovers the that his family’s protector gargoyle has magical powers and will do anything Liam orders, Liam decides it’s time to teach the bully a lesson. Liam realizes how series the bully’s injuries are, he regrets his choice. However, he decides to use the gargoyle one last time — for good — to help his family. This will be a good book club choice for the very realistic moral dilemmas. 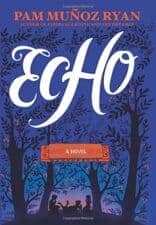 Echo by Pam Munoz Ryan HISTORICAL ages 10 – 14
The writing, plot development, and characterization are masterfully done but I honestly think this should have been a shorter novel. It’s broken up into three shorter stories because the three stories tie together at the end but wow it was long — almost 600 pages. With the exception of Harry Potter, I can’t see many kids reading that much — but what do you think? That being said, this book takes place during different years around the second world war time period. The thread that ties the characters together is a most magical harmonica. (I loved that!) I do recommend this book, it was lovely and very well-written. 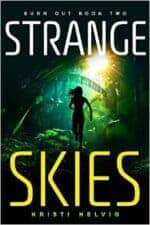 Strange Skies by Kristi Helvig SCI-FI YA
If you like fast-paced action and sci-fi, this is a good book for you! Second in the Burn Out series, Tora is rescued from the Consulate and arrives on a new planet in the middle of a two conflicts — one, between the Resistance and the Consulate and two, between the vicious Resistance leader, Kale and the less-violent Resistance members including Tora. And everyone wants Tora’s father, the scientific mastermind behind the guns or at least his knowledge of the key to using the guns. Her feelings for James are conflicted but develop into a romance during this action-packed story. The story isn’t done yet, so look for book three next year.

Burn by Walter Jury and Sarah Fine SCI-FI YA
Sequel to Scan, this book was even better than the first in my opinion. Now we know that aliens exist and have infiltrated the humans so well that most humans AREN’T human and don’t even know it. In fact, only 12 pure families remain and are in constant danger from the alien leaders. Only when Tate and his girlfriend, Christina, are captured, it appears that maybe they both have a common enemy and should work together to save the Earth. Tons of action and adventure made this a fun and entertaining read.

All books are now on my book lists by age group: 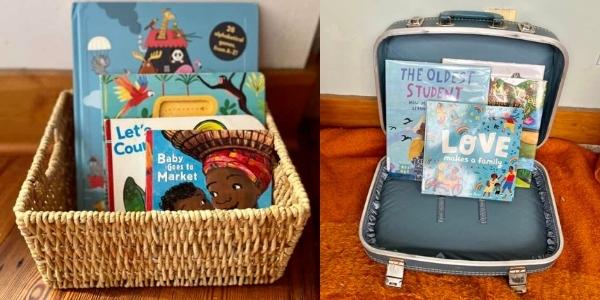