It’s mid-summer and I’ve already got another long list of good books for your kids to read. New! Hot of the presses! I love new books, as you can tell. 🙂 So if you need new chapter book ideas for your summer reading, check out these reviews. Hopefully something will stand out to you that will interest your kids. Happy reading! 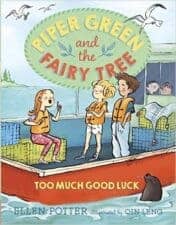 Piper Green: Too Much Good Luck (book 2) by Ellen Potter, illustrated by Qin Leng REALISTIC ages 6 – 8
Piper is a lovable girl who just like all of us, makes mistakes, and hopes for her luck to change. She learns a valuable lesson about jealousy and friendship in this short and sweet story. Also read, Piper Green and the Fairy Tree.

The Kicks Hat Trick by Alex Morgan (book 4) REALISTIC ages 8 – 12
Finally, a fantastic book (series) for soccer girls! If you have a soccer player in your house, and I think a LOT of you do, you’ll want to get your soccer lover this book –actually, buy her the entire series. Written by Olympic Gold Medalist and U.S. Soccer team member (among other things), Alex Morgan, it’s a realistic story of life, friendship, and playing soccer. As happens in the real world, struggles and conflicts arise. In this particular story, Devin’s beloved Kicks team are separated in the winter soccer league. Not only does it seem like her friends are drifting away, Devin’s new coach encourages aggressive playing –and Devin’s not loving it.

Diary of a Mad Brownie by Bruce Coville FANTASY ages 8 – 12
It took me a minute to get into the story — but once I passed the slow beginning, I found the story entertaining. We follow a cursed Brownie who is forced to live with a messy American girl and her family. It’s told in diary entries from both main characters’ points of view plus ancient texts, text messages, and letters.

Gone Crazy in Alabama by Rita Williams Garcia HISTORICAL ages 8 – 12
It’s a typical southern summer in Alabama 1969 and Delphine and her two sisters are visiting their extended family. Daily life means minding their grandmother, Big Ma, a crotchety matriarch, getting extra loving from their much sweeter great-grandma, Ma Charles, hanging out with neighbor, JimmyTrotter, and working at the tricky business of growing up. No matter what happens, a Vonetta-stealing tornado included, this is a strong family that loves each other and God with all they’ve got. It’s a powerful book that transports you into Delphine’s world, if only for the summer.

Masterminds by Gordon Korman SCI-FI ages 8 – 12
The only thing I don’t like about this book is that I have to WAIT for the second book. How will I do it? It’s such a fantastic story that grabs you and blows you away little by little. Imagine a utopia-type town of happiness all the time . . . sounds Stepford-ish, right? Well, it is. Sort-of. Eli and his friends discover that some of them are physically prevented from leaving the town — with violent pain and some sort of signal that brings the guards to take them back. But there’s more. Eli discovers his “father” is the leader of a group of scientists who are using the town and some of the kid, in a secret and unapproved science experiment. And you won’t believe what that experiment is!! (Hint: the title gives you a big clue.)

Crown of Three by J.D. Rinehart FANTASY (Book 1) ages 10 +
The realm is ruled but a power-hungry and despicable king. When his mistress gives birth to triplets of a prophecy, the three children are spirited away and hidden separately. Now that the children are older, each of them faces challenges and adventures that lead them to the truth of who they really are — the foretold saviors of the empire. It’s a great adventure story with cool creatures, a few zombies, danger, and epic kid-power. I’m looking forward to the next book.

The Fog Diver by Joel Ross SCI-FI ages 8 – 12
Dystopian middle-grade! The world is covered by a deadly “fog” that kills humans so the humans live only on the highest mountain peaks. Our heroes, a band of scavenging orphans, are trying to find something in the world below that they can sell in order to travel to another city where they can treat the cloud sickness of their beloved mother figure. I loved the suspense, the fascinating world, the characters, and the happily ever after. I couldn’t tell from the ending if there will be more books because thankfully there was no cliffhanger. 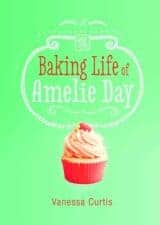 The Baking Life of Amelie Day by Vanessa Curtis REALISTIC ages 8 – 12
I enjoyed this book so much! The writing flows, the plot is engaging, the characters are fascinating — especially Amelie — and learning about living with Cystic Fibrosis is quite eye-opening. Amelie loves to bake (could you guess from the title?) and she’s made it to the semi-finals of a teen baking contest in New York City. Unfortunately, her health deteriorates (which happens when you have CF) and her mom won’t let Amelie compete. You won’t just love this story but also want to try the various recipes throughout the book – I love when authors do that. 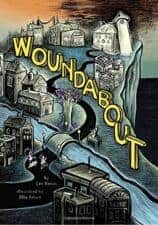 Woundaout by Lev Rosen, illustrated by Ellis Rosen MAGICAL REALISM ages 8 – 12
This is an interesting story with a thought-provoking topic of change — can you stop change and is change good, bad, or both? When their dads are killed, siblings Connor and Cordelia and their pet capybara travel to live with their aunt who lives in the very strange city of Woundabout. It’s strange because it’s empty of children, greenery, and any spontaneity. It turns out the townspeople are totally against change, of any kind. It’s Conner and Cordelia who force the town, and their aunt, to realize that change isn’t always bad.

The Worst Class Trip Ever by Dave Barry HUMOR BOOKS ages 8 – 12
Hilarious. Of course. While on a class trip to Washington D.C., Wyatt and his best friend, Matt, are positive they’ve discovered a plot to blow up the White House. Wyatt’s crush, Suzanna, helps the friends make a plan, and as you can imagine, disaster and hilarity strike. I totally loved this book and know your kids (especially those who like humor) will as well. See more funny books for kids.

All the Answers by Kate Messner MAGICAL REALISM ages 8 – 12
Ana’s pencil can tell her answers — to things like tests, and if boys like her friend Sophie. She discovers that her grandfather, who is in a rest home, wants forgiveness from Ana’s mother; that Ana’s mother is mad about her grandfather’s gambling problem. Ana realizes that she doesn’t want to know all the answers, even if she is just trying to help. I love the story and the issues it brings up — this would be a great book club pick! 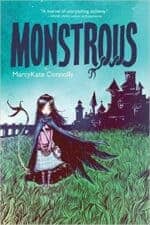 Monstrous by MarcyKate Connolly FANTASY ages 8 – 12
This story begs the question: Does an evil creator make evil progeny? Or do we have a choice about our destiny? Kymera lives with her father / creator who made her out of parts of other creatures and the soul of her former self who was killed by the evil wizard. Her purpose is to rescue the girls held by the wizard. Except, against her father’s wishes, Kymera befriends a townsperson and learns conflicting information. Could her own father be the wizard? And could Kymera be helping him kill all the girls? It’s a brilliant story, thought-provoking and well-written. 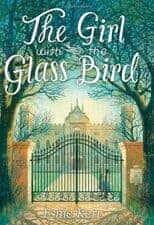 The Girl with the Glass Bird by Esme Kerr MYSTERY BOOK ages 8 – 12
A lonely orphan named Edie is forced to leave her only known relative, and live at a strict boarding school in order to surreptitiously protect Anastasia, the Russian prince’s daughter. While she’s at it, she’s also supposed to discover what is behind all of Anastasia’s problems. Edie thinks there’s something fishy going on; that someone is trying to make Anastasia believe she’s going crazy. But, it’s not so easy to tell — it could be that Anastasia is lying. Then she learns that the headmaster knew her mother and was her mother’s sworn enemy. This is an engrossing mystery tangled with compelling characters and emotional resonance. 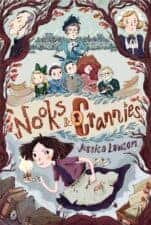 Nooks and Crannies by Jessica Lawson MYSTERY ages 8 – 12
I picked this book up because I loved the cover art. Yes, I admit to judging a book (at least initially) by it’s cover. Although it’s bit predictable, Nooks and Crannies is a sweet story about a young girl with horrid parents. Just before she’s about to be sent to an orphanage, she learns that she just might be a rich someone’s heir and have the chance to live happily ever after. 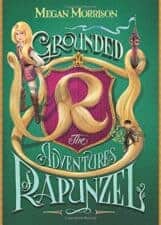 Grounded: The Adventures of Rapunzel (Tyme #1) by Megan Morrison FANTASY / FAIRY TALE ages 8 – 12
Rapunzel is happy living in her castle with everything she needs since Witch takes good care of her. But her life gets totally confusing and complicated when she follows Jack to the ground, meets fairies who hate Witch, and visits the Woodmother in order to save her own life. Could Witch be what they all say? Rapunzel is very confused. 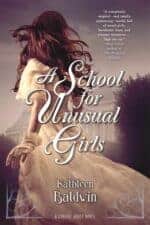 A School for Unusual Girls by Kathleen Baldwin HISTORICAL FICTION ages 13+
Sent to the Stranje House for burning down her family’s barn after a failed invisible ink science experiment, Georgina soon learns it’s not really a reform school but a sanctuary for smart, female spies who can help the British government. It’s 1814 and the government is desperate for Georgina to succeed with her ink so they can successfully send messages across enemy lines. Entertaining and adventurous!

Movies Made From Books 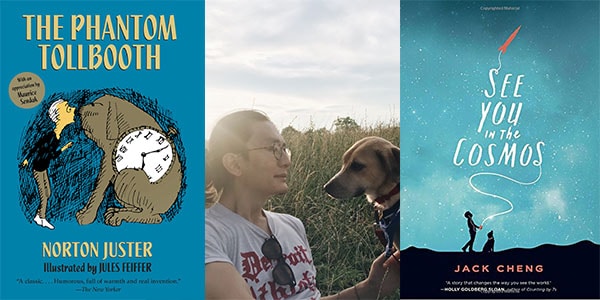