Well into the middle of summer, you might be needing an infusion of new middle-grade books. If so, keep reading. You’ll find 13 new books about a variety of topics in a range of genres including realistic, magical realism, and fantasy. 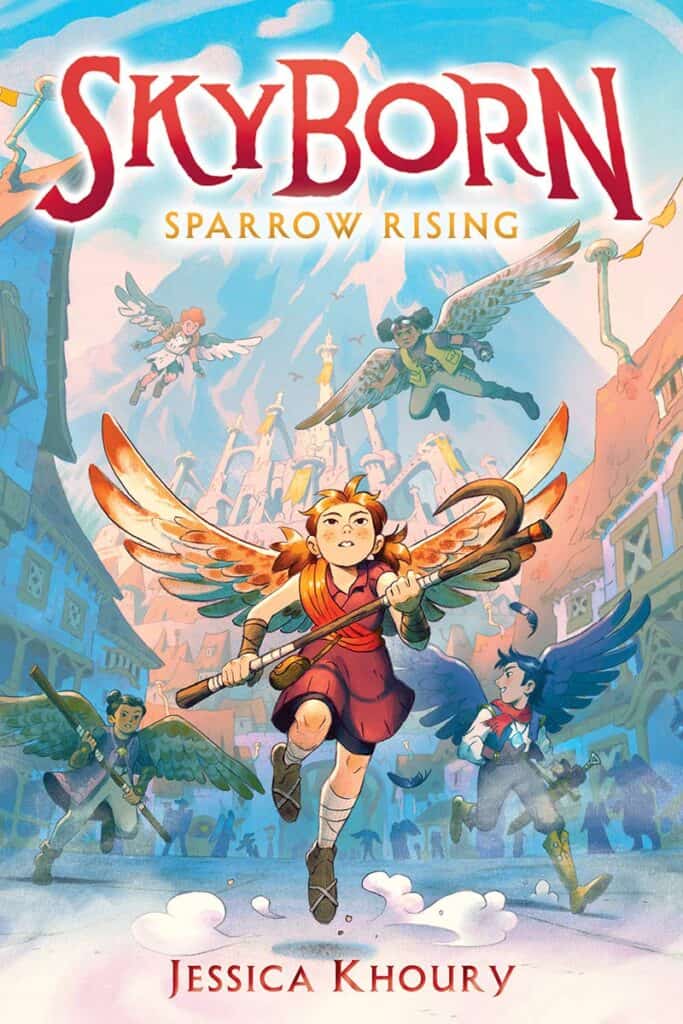 FANTASY
Ellie is an orphan Sparrow girl in a world of avian-human caste system who wants to be a warrior, not a farmer like Sparrows are meant to be. She flees the orphanage so she can travel to a race where she could compete for a coveted spot in the knight training school. On her journey, she travels with a group of outcast kids, thieves trying to survive, and their friendship and adventures begin to open her eyes to who is actually honorable and heroic and who is not. She also learns that the stolen gem is a gargol eye with powerful healing properties. One of my favorite books of the year so far, this fantasy adventure checks all the boxes with a genuine, courageous main character and complicated companions, plus themes of  magic, growing up, and secrets, so many secrets…(If Studio Ghibli is looking for another movie project, I vote for adapting this book series!) 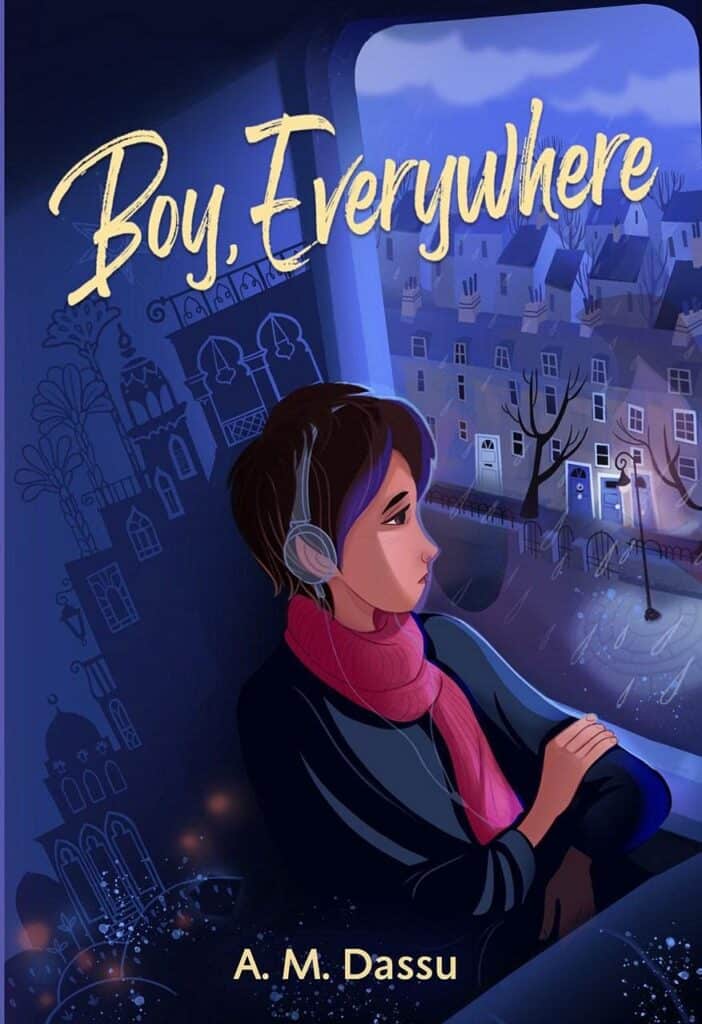 REALISTIC / IMMIGRATION / MIGRATION
Skillful writing transports us into Sami’s experience of modern Syrian life torn away by violence, his family’s sudden escape from the country, awful traveling conditions, detention in England, and his stay with hateful relatives. We feel his emotions every step of this journey — from thinking about playing video games and soccer to his worry about capsizing in an overcrowded boat in the ocean and to blaming himself for his mom and sister being at the mall when it was bombed. In sharing his experiences, we see how much we relate to Sami because he’s just a regular kid trying to be safe. 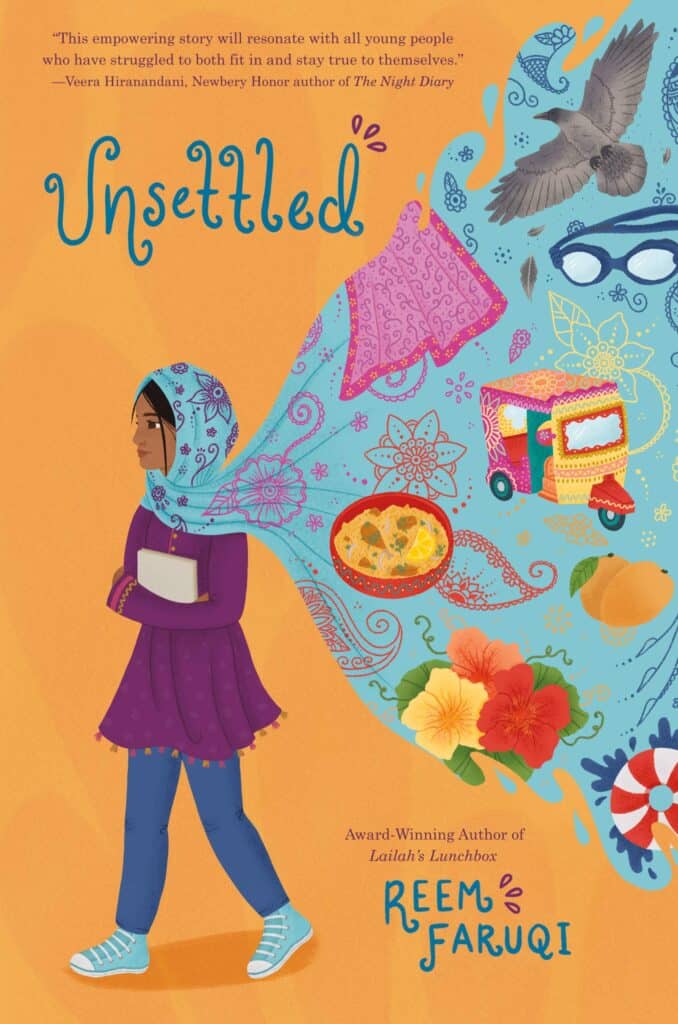 REALISTIC / IMMIGRATION / VERSE
Nurah’s family moves from Pakistan to Georgia, U.S., and she feels distinctly unsettled at her new outsider status which includes everything from her accent to her clothing to her brown skin. She makes one friend and that helps her feel more comfortable. Meanwhile, her brother who excels at swimming suddenly quits after bullies violently attack him. As she adjusts to her new life, Nurah learns to speak up for others including her brother, finds confidence in her faith, and learns to value her way of being which means ignoring the opinions of others. This is a beautiful coming-of-age story that tackles racism, bullying, friendship, belonging, family, culture, and self-confidence. 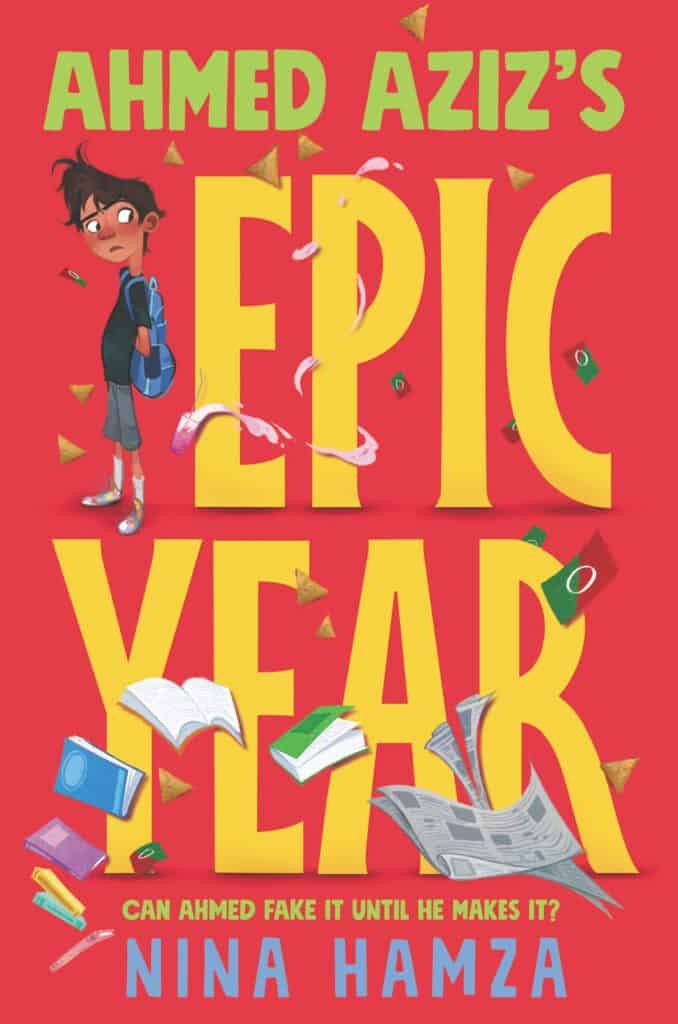 Ahmed Aziz’s Epic Year by Nina Hamza
REALISTIC / SICK PARENT / MUSLIM MAIN CHARACTER / NEW SCHOOL
Ahmed’s family moves from Hawaii to Minnesota to help his dad get treatment for his rare liver disease. At his new middle school, he’s bullied endlessly by his neighbor, Jack. Plus, even though he hates to read, his group needs Ahmed to do his part by reading the three assigned books. He eventually does and learns to think about books in a deeper way. Things get even more complicated when his dad goes into ICU and someone makes a threat against the school pretending to be Ahmed. But, Ahmed learns to stand up for himself and focuses on what matters — his family. 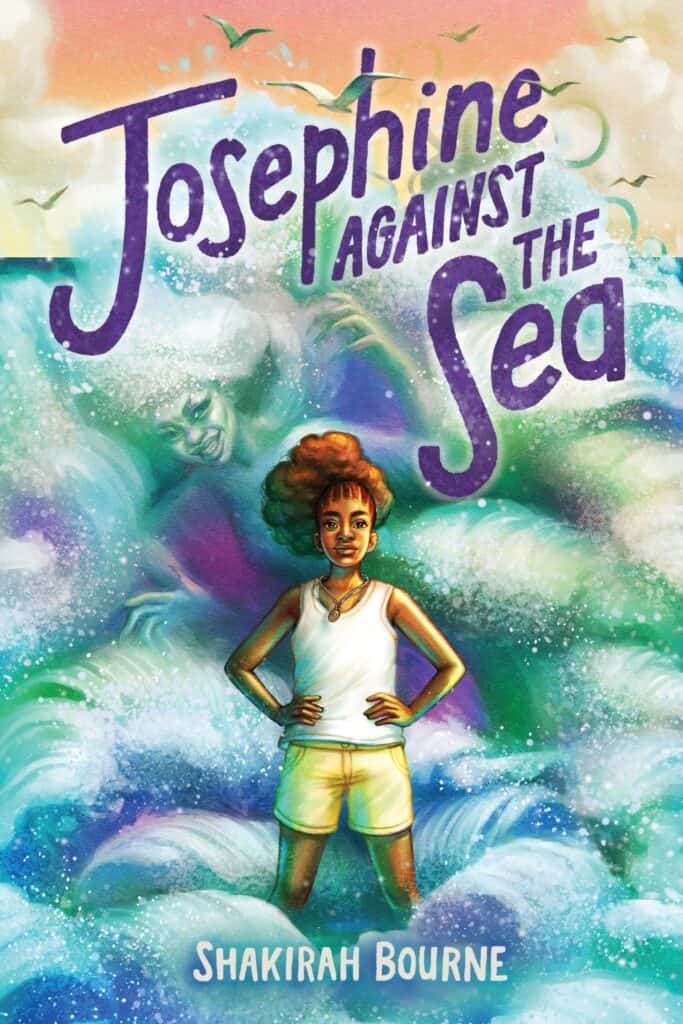 Josephine Against the Sea by Shakirah Bourne

MAGICAL REALISM / MYTHOLOGY
If you like mythological adventure stories about growing up and family written with edge-of-your-seat excitement, don’t miss this middle-grade novel set in the Caribbean. Josephine loves cricket and her daddy. Anytime her daddy brings home a girlfriend, she and her best friend plot to get rid of them quickly. But one girlfriend, Mariss, Josephine can’t get rid of. Not only does Mariss move in with them but Josephine’s dad acts like he’s under a spell. (Hint: he is.) Josephine realizes that Mariss isn’t a human and that in order to save her father, she must risk everything. 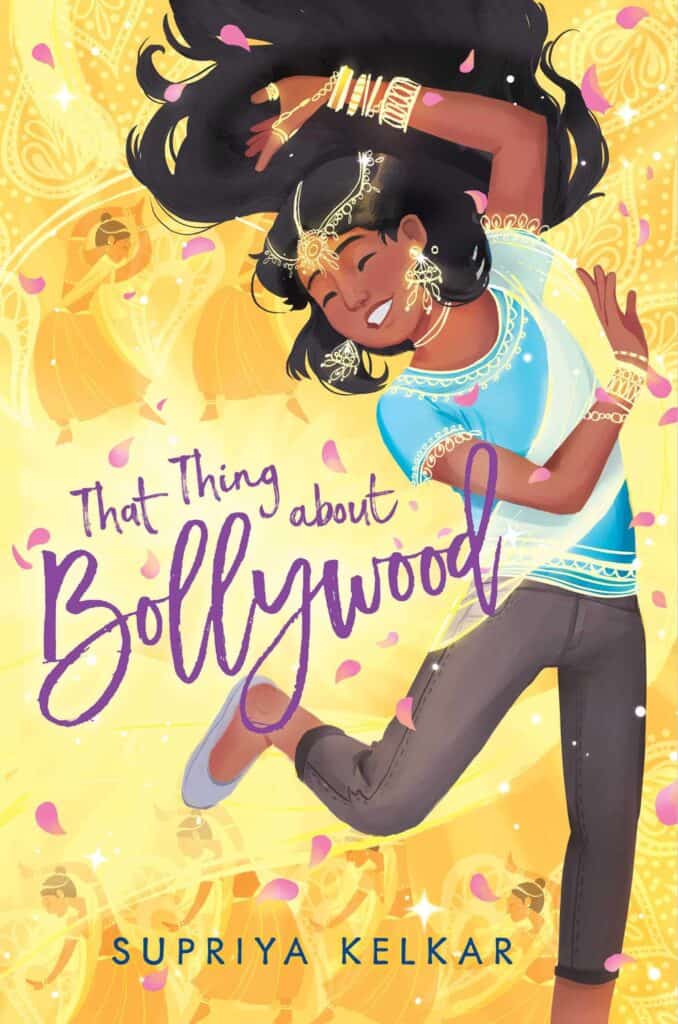 That Thing About Bollywood by Supriya Kelkar
MAGICAL REALISM
Zara can’t explain why one day she wakes up inside Filmi magic–where every person has their own soundtrack and to express themselves, it’s perfectly normal to break out in song…and dance! It’s totally embarrassing because she can’t control her expressive dance numbers– they just come out unexpectedly. Plus, no one remembers that life used to be different. While she navigates this new world, Zara learns the importance of feeling her emotions and expressing her thoughts–especially to her parents. Will this be the way to undo the magic? A funny, engaging story with an important message.
**Ready about author, Supriya Kelkar’s, journey from Bollywood scriptwriter to children’s book author in her essay, “From Bollywood to Books“. 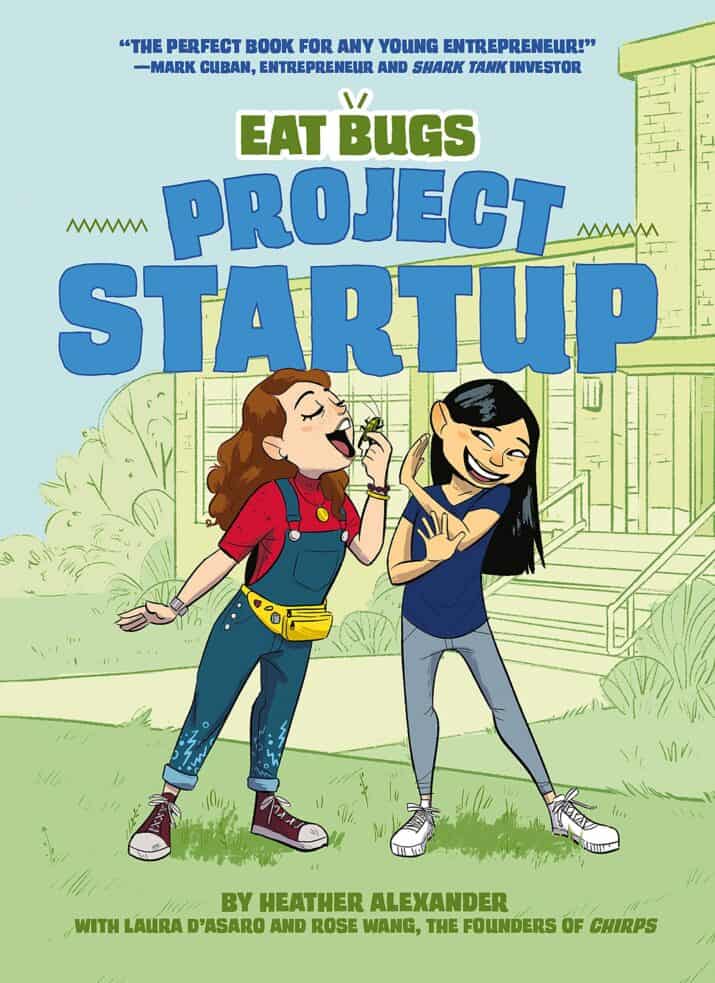 Project Startup: Eat Bugs by Heather Alexander with Laura DAsaro and Rose Wang
REALISTIC / ENTREPRENEUR KIDS / FRIENDSHIP
For their entrepreneur class, Hallie and Jaye, who aren’t friends, are paired together for a big project. It’s difficult to pick an idea but Jaye’s idea wins out; that is until it’s stolen by her former best friend. Therefore at the last minute, the girls pitch Hallie’s idea — edible crickets. As they navigate their own personal situations at home and with friends, the two use the scientific method and teamwork to research a winning product, ending up with the accidental discovery of smashed crickets as a protein powder in cookies. A delightful story about friendship, collaboration, entrepreneurship, and family. 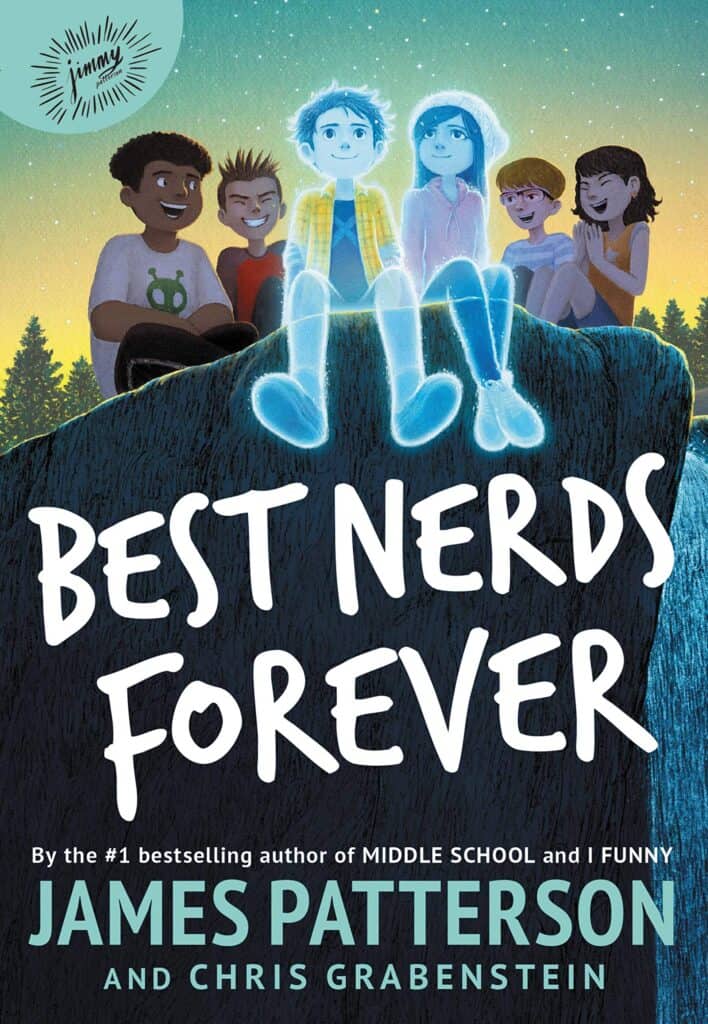 Best Nerds Forever by James Patterson and Chris Grabenstein
REALISTIC / GHOST / FRIENDSHIP
Finn gets run off the road by a van and dies. And so begins the story of his new life as a ghost– he hopes to figure out who ran him off the road and why! As he wanders around his town, he meets another ghost— a girl who had gone missing. Readers will zip through this middle-grade story with an interesting premise, humor, and mystery about friendship and making the best of your circumstances. 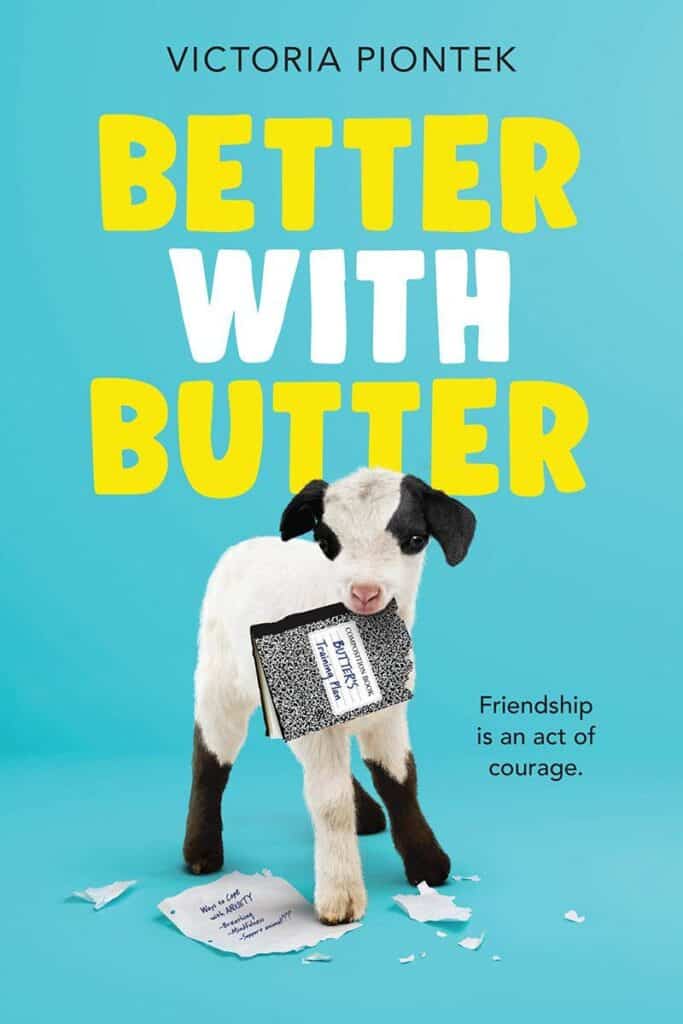 Better With Butter by Victoria Piontek
REALISTIC / ANXIETY / EMOTIONAL SUPPORT ANIMAL
Marvel’s anxiety makes school feel impossible — especially after freezing on stage during a required full-class participation event. Walking home from school, she finds a dirty, garbage-eating goat being teased by a group of boys. Surprising herself with newfound bravery, Marvel yells at the boys and takes the fainting goat named Butter home with her. Her parents reluctantly allow Marvel to keep Butter but require her to look for the owner. When they’re together, Marvel feels the noises in her head diminish and relies on Butter as her emotional support animal. But Marvel is devastated when Butter’s owner claims her. The sadness she feels about losing Butter helps her find support in group therapy. Finding new coping skills from her time with Butter, she gets a full-circle, perfect ending.
**Be sure to read Victoria Piontek’s essay, “What Animals Taught Me About Managing Anxiety“. 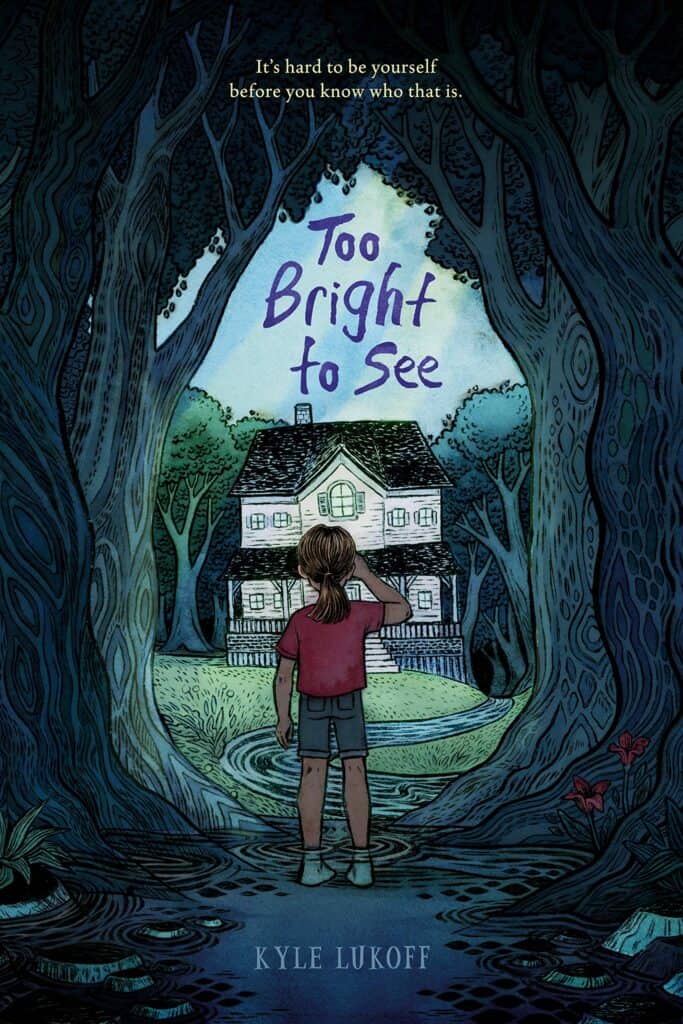 Too Bright to See by Kyle Lukoff
REALISTIC / GENDER IDENTITY / GHOST
It’s the summer vacation after Bug’s beloved uncle has passed away. But his ghost seems to be haunting the house only Bug can’t figure out why. Bug’s best friend Moira is focusing more on makeup and clothes none of which Bug is interested in. As the ghostly experiences continue, Bug notices the messages focus on finding yourself, and Bug beings to understand that he identifies as a boy, not a girl. Narrated in the first person, Bug’s character arc shows a coming of age, coming into gender, experience. 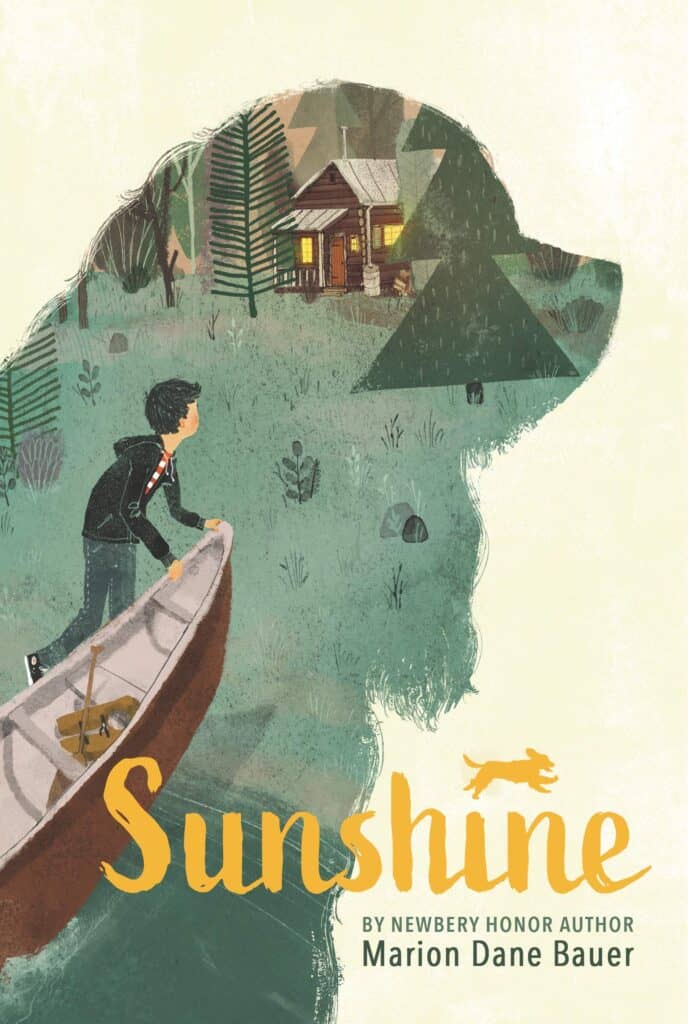 Sunshine by Marion Dane Bauer
REALISTIC / FAMILY RELATIONSHIPS
Ben’s visiting the mother that abandoned his dad and him when Ben was three years old, hoping that she’ll see he’s good enough and come back. He relies on his dog Sunshine for emotional support, finding comfort and safety in their friendship. Ben’s mom lives on an isolated island and there, she lets Ben be free-range. This terrifies Ben but he hopes to prove himself to his mom. On his exploration, Ben gets lost and feels angry that his mom doesn’t notice. He can’t figure out why his mom left nor why she doesn’t care more about spending time with him. Ultimately, this is a deeply heartbreaking story about a complex relationship between a broken mother and a wounded son.
**Don’t miss Marion Dane Bauer’s beautiful and wise essay, “Painfully Sad Novels Deepen Our Humanity“. 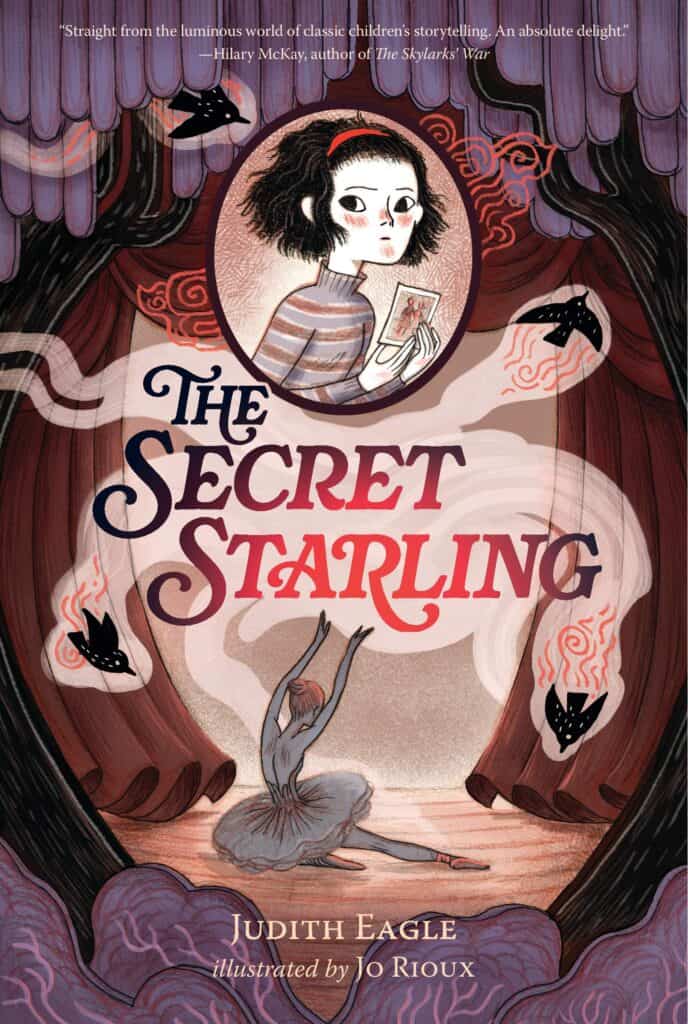 The Secret Starling by Judith Eagle, illustrated by Jo Rioux
MYSTERY
Readers, don’t miss this heartwarming mystery about a lonely orphan girl whose unfeeling uncle abandons her. She sneaks back to her uncle’s dilapidated manor house where she meets a new friend named Peter who is just arriving there, too. Together, they take care of themselves and play with new village friends. Then, they discover a ballet show that leads them to uncover the true story of Clara’s mom, a rising ballet star and who died mysteriously. As the friends explore, more than one sinister plot is uncovered — and all the family secrets are revealed. 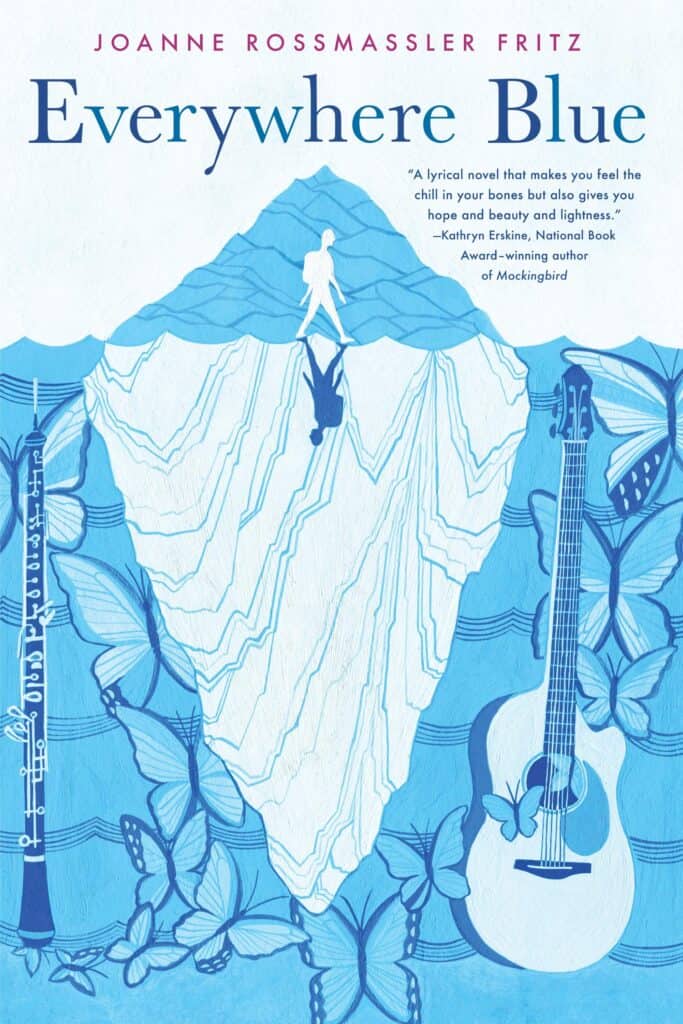 Everywhere Blue by Joanne Rossmassler Fritz
REALISTIC / VERSE NOVEL
When Maddie’s older, environmentalist brother walks away from his college campus with only a backpack, her dysfunctional family dynamics are amplified and she tries to make sense of what happened to her brother. Maddie feels better compulsively counting and playing the oboe while searching for clues — which is how she figures out the answer to what happened to her brother. This genuine novel in verse about family, growing up, environmental issues, and music is an interesting story that readers will zip through. 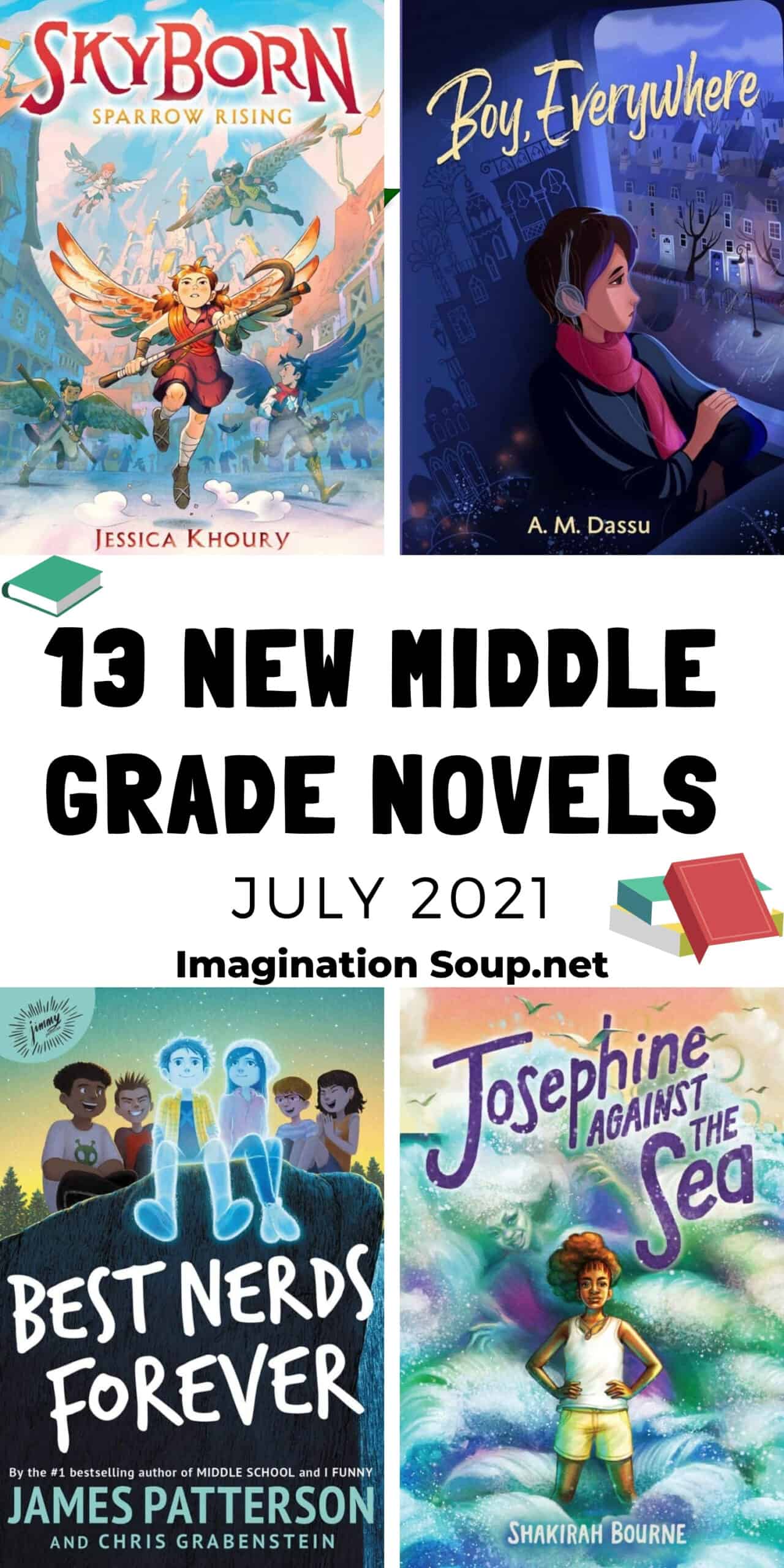 Back to School Books

Best Fantasy Books for Ages 6 to 16

If You Like to Laugh, Read These 5 New Funny Picture Books 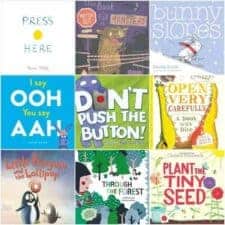