The Summer Olympic Games are an exciting world event of athletics and national pride. Get your kids excited about the different Summer Olympic sports by reading children’s books to build up their background knowledge and anticipation for these exciting athletic events.

Did you know that the Summer Olympics has more than twice the sports as the Winter Olympics?

You can see the entire list of sports on Olympics.org but I’ve listed some of the summer sports below.

Get ready for the Summer Olympics with this book list to help you follow along with the different sports that you can watch. 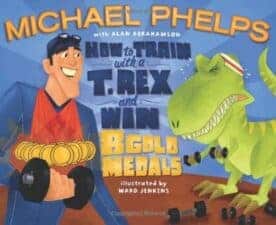 How to Train with a T.Rex and Win 8 Gold Medals by Michael Phelps and Alan Abrahamson
This is a great perspective for kids on how Michael Phelps worked hard, really hard, to accomplish his 8 gold medal wins. 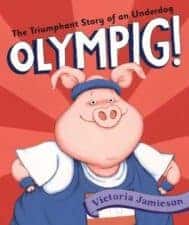 Olympig! by Victoria Jamieson
Boomer the Pig is in the Animal Olympics but he keeps losing his races. And that’s really hard! But he continues to think positively and realizes that it’s all good practice for the next Olympics. 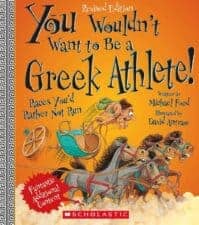 You Wouldn’t Want to Be a Greek Athlete by Michael Ford, illustrated by David Antram
Seriously. It wasn’t easy to be a Greek athlete as you’ll learn in this interesting depiction of life back in the day. (And you certainly wouldn’t want to be female in this historical time period either.) 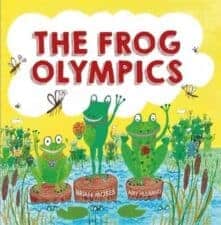 The Frog Olympics by Brian Moses, illustrated by Amy Husband
Yes, there’s pole vaulting in the Frog Olympics but there’s also fly-catching, too. This is a competition where athletes of all sizes and abilities can enter the events. 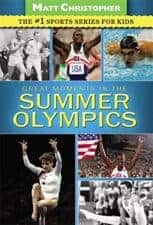 Summer Olympics by Matt Christopher
What sports will you see in the summer Olympics? From aquatics to tennis, gymnastics to sailing, there are so many sports to discover during this competitive event. You’ll learn about the famous athletes in each sport. Athletes like Jesse Owens, Olga Korbut, Mary Lou Retton, and Wilma Rudolph. 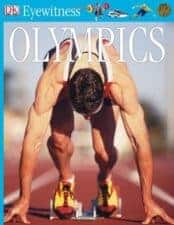 Olympics (DK Eyewitness) by Chris Oxlade and David Ballheimer
Learn about the first Olympics, the differences between the winter and summer Games, behind the scenes, and lots more. Photographs fill the pages alongside informational text. 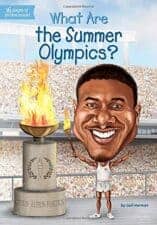 What Are the Summer Olympics? by Gail Herman, illustrated by Stephen Marchesi and Kevin McVeigh
A great book for elementary students, this beginning chapter book starts with the history of the Olympics and continues with politics, and memorable events. Illustrated with line drawings. 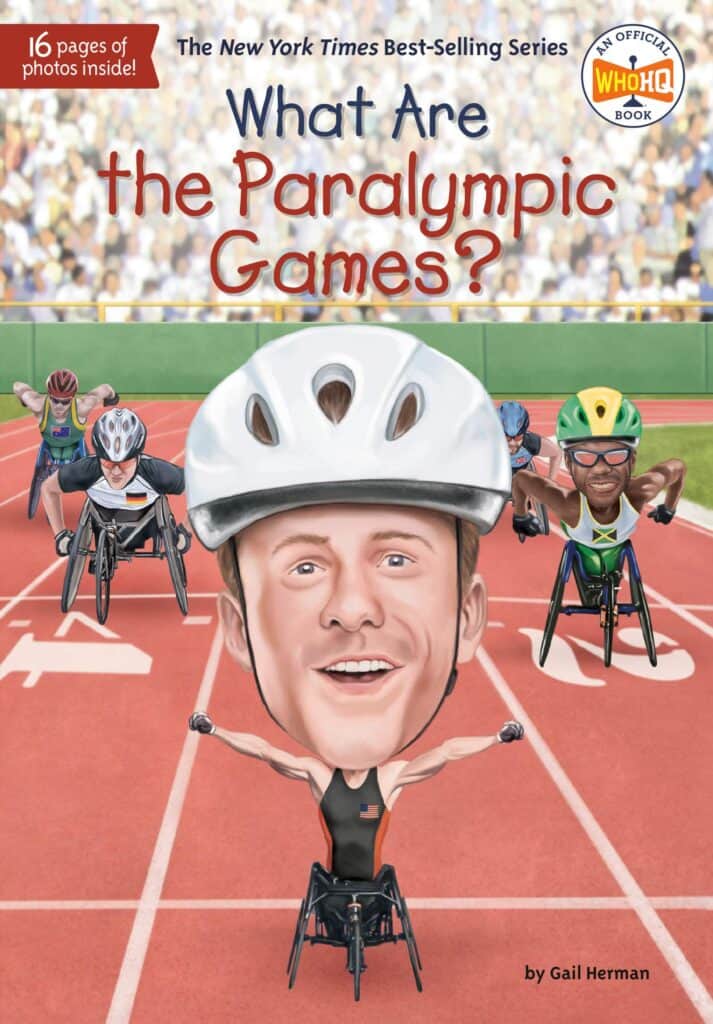 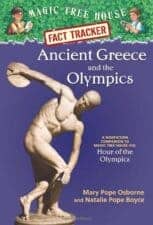 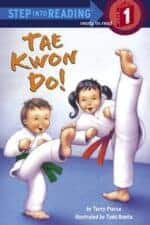 Tae Kwon Do! by Terry Pierce
This very basic early reader takes readers through a class of Tae Kwon Do, giving kids a glimpse of this martial art appearing in the Olympics. 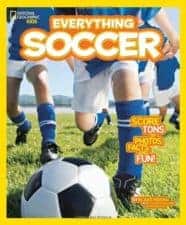 Everything Soccer (National Geographic Kids) by Blake Hoena
Soccer is a favorite universal sport so learn everything about it (there’s a lot in this small book!) before you see it played at the Olympics. As you might expect, this National Geographic book is filled with captivating full-color photos. MORE SOCCER BOOKS HERE 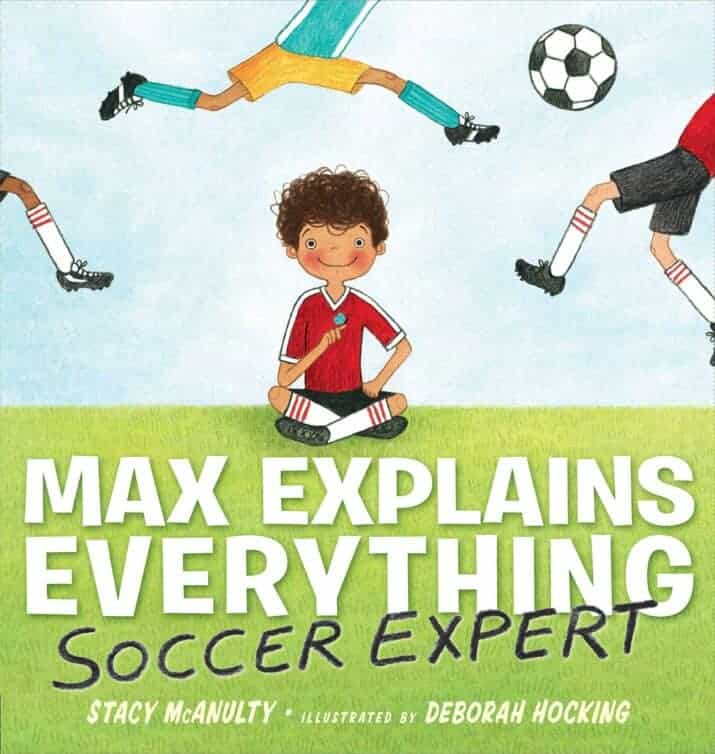 Max Explains Everything Soccer Expert by Stacy McAnulty, illustrated by Deborah Hocking
A funny and playful kids-eye view of the game of soccer that doesn’t focus on winning but the fun of playing and of course, the snacks. Max explains everything from warming up to what to bring to the game. MORE SOCCER BOOKS HERE 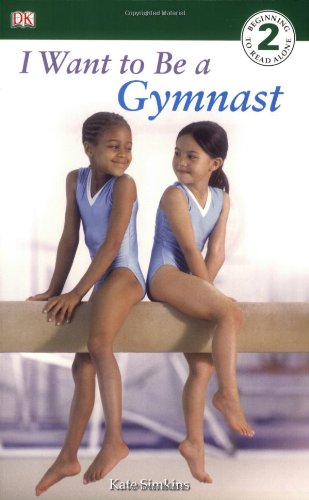 I Want to Be a Gymnast by Kate Simkins
There aren’t very many well-done updated gymnastics children’s books that aren’t fiction or autobiography so I’m including this as a basic starting point book. It’s a beginning reader that will introduce kids to some of the moves in gymnastics. 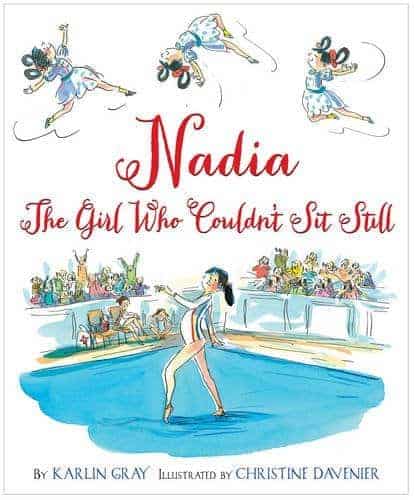 Nadia The Girl Who Couldn’t Sit Still by Karlin Gray, illustrated by Christine Davenier
This lovely biographical picture book introduces a new generation to the hard-working Nadia Comaneci of Romania . . . how she loved to move, discovered gymnastics, failed, practiced, and then won seven perfect 10s at the Olympics in 1956. The illustrations make me want to move, they’re absolutely spot-on for this sweet, true story. 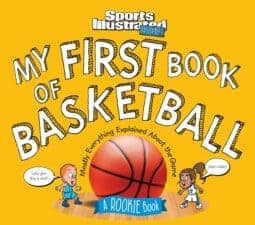 My First Book of Basketball (A Rookie Book / Sports Illustrated Kids)
Basketball made simple — I love this combination of photos and illustrations that make this picture book visually appealing. Not only that, the text is perfect for young readers. “The team that has the ball is called the offense.” MORE BASKETBALL BOOKS HERE. 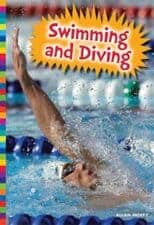 Swimming and Diving
This beginning reader is filled with color photography about swimming and diving in the Olympics.
Also in this series: Basketball, Combat Sports, Track and Field, and Gymnastics. 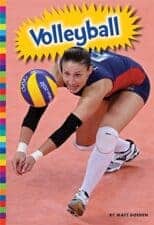 Volleyball
Get the scoop on volleyball in the Olympics including rules for playing, an overview of indoor and beach volleyball, and well-known players such as Misty May-Treanor and Kari Walsh Jennings. 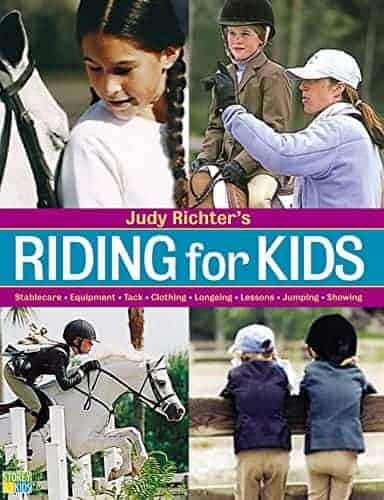 Riding for Kids by Judy Richter
This is a photograph-filled informational guide to the basics of English riding. 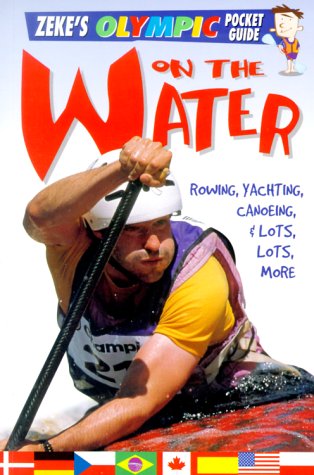 On the Water: Rowing, Yachting, Canoeing, & Lots, Lots, More (Zeke’s Olympic Pocket Guide) by Jason Page
Written for the Sydney, Australia Olympics, this little book is about the sports of sailing, rowing, and canoeing. 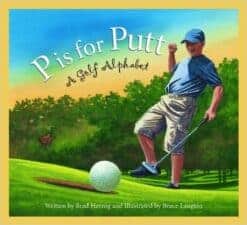 P is for  Putt: A Golf Alphabet by Brad Herzog, illustrated by Bruce Langton
Take a look at the history, game elements, and superstars of golf in this informative alphabet book. 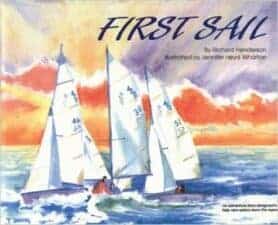 First Sail by Richard Henderson, illustrated by Jennifer Heyd Wharton
Adam’s cousin Beth shows him how to sail — things like nautical terms, channel markers, safety, knots, and anchoring. When a storm arises he’ll have to make use of his beginning knowledge. 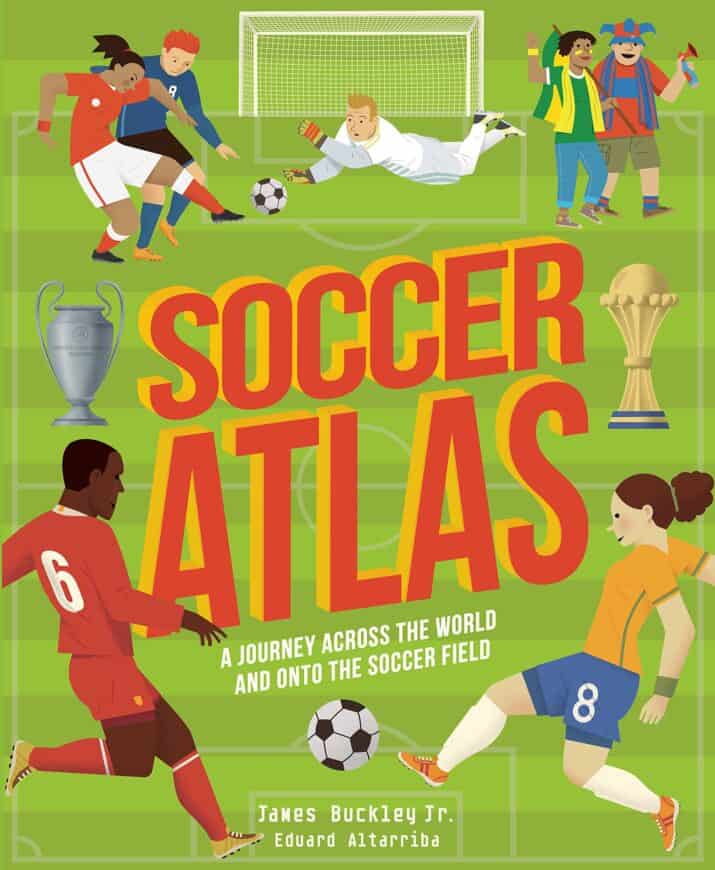 Soccer Atlas: A Journey Across the World and Onto the Soccer Field by James Buckley Jr., illustrated by Eduard Altarriba
This encyclopedic book will teach readers all about football/soccer starting with the basics of the field to FIFA and the World Cup to soccer around the world, the superstars of the sport, and much more. Illustrated with some photos and cool layouts that will appeal to readers. 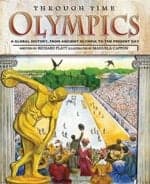 Through Time The Olympics From Ancient Greece to the Present Day by Richard Platt, illustrated by Manuela Cappon
This book gives readers background information about the Olympics and it’s fascinating stuff — I just learned from my daughter all about the number of swimming pools needed in an Olympic Games. From Paris, 1900 to London 2012, we get a glimpse of each host city as well as information about the Games. 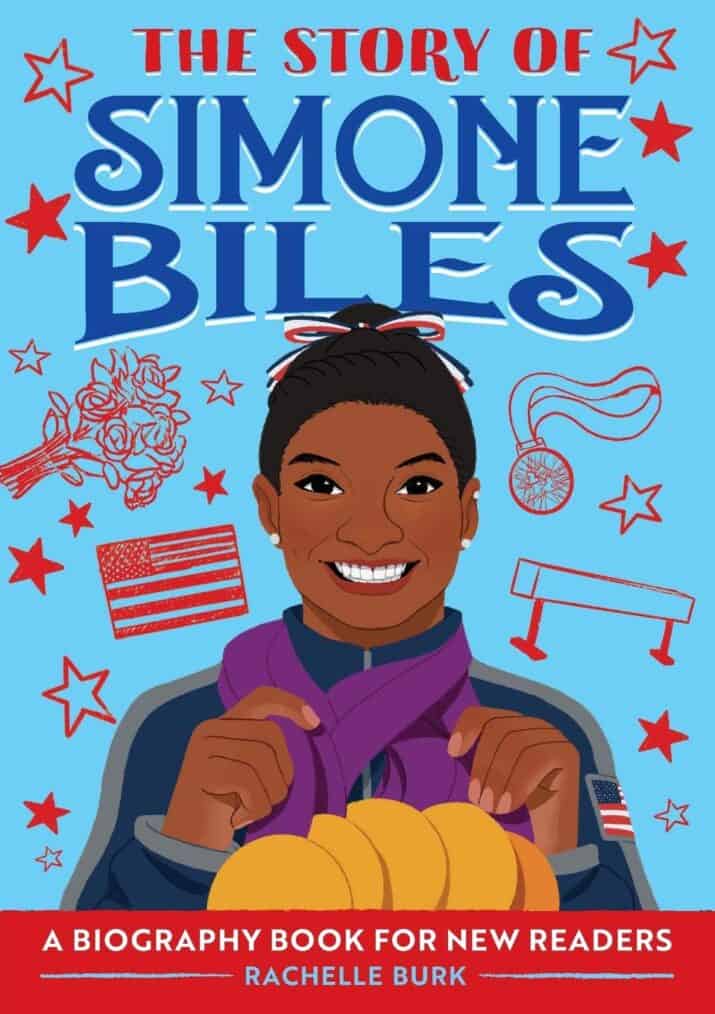 The Story of Simone Biles by Rachelle Burk
Simone Biles’s life story is an inspiring one — she has won more gymnastic medals than anyone in history and continues to be a top performer and advocate for other athletes. This illustrated biography will help kids learn all about this amazing athlete from her early years to the present day. 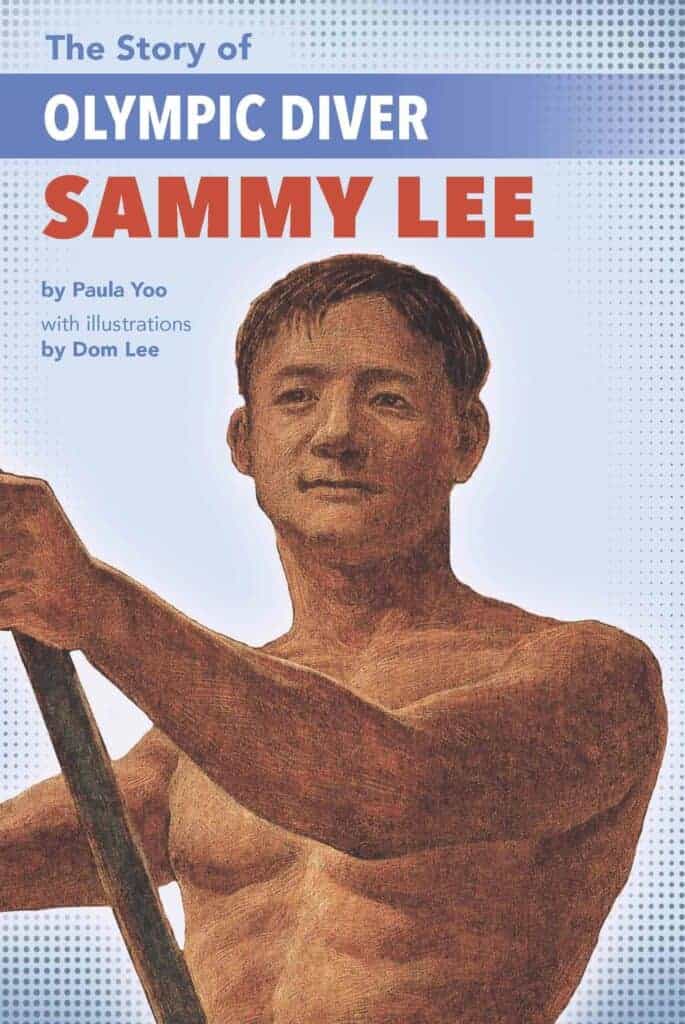 The Story of Olympic Diver Sammy Lee by Paula Yoo, illustrated by Dom Lee
Don’t miss this interesting early chapter book biography about a Korean American diver, Sammy Lee. Growing up, Sammy could only use the swimming pool one day a week, the day it was for people of color. During the rest of the week, he used a sandpit in his coach’s backyard. Gack! His hard work paid off and you’ll read all about his many challenges leading to eventually competing in the Olympics. He was the first Korean American to win gold for the United States! 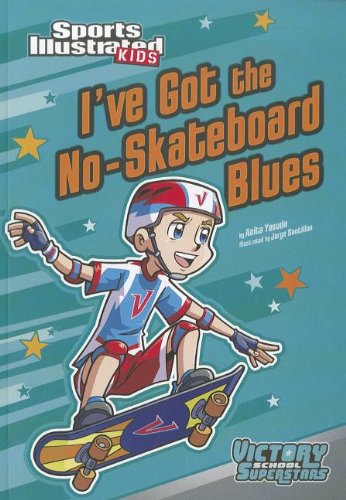 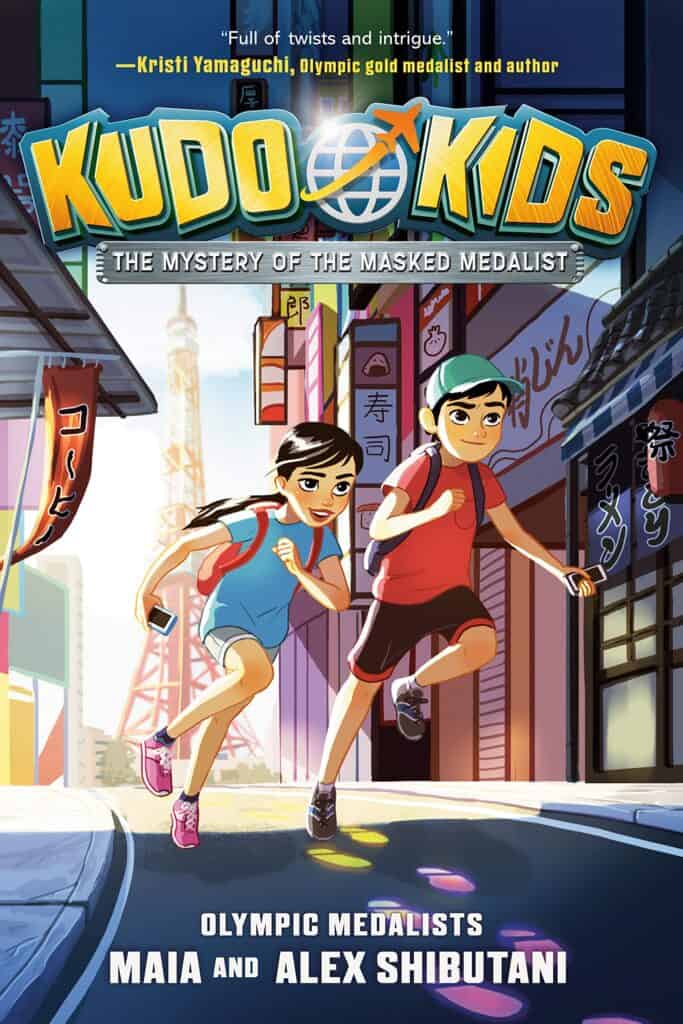 Kudo Kids: The Mystery of the Masked Medalist by Maia Shibutani, Alex Shibutani, and Michelle Schusterman, illustrated by Yaoyao Ma Van As
The two-time bronze medalists Maia and Alex Shibutani bring you a middle-grade mystery set during the Tokyo Olympics! The siblings encounter puzzles, secrets, and gaming during this thrilling Olympic adventure. 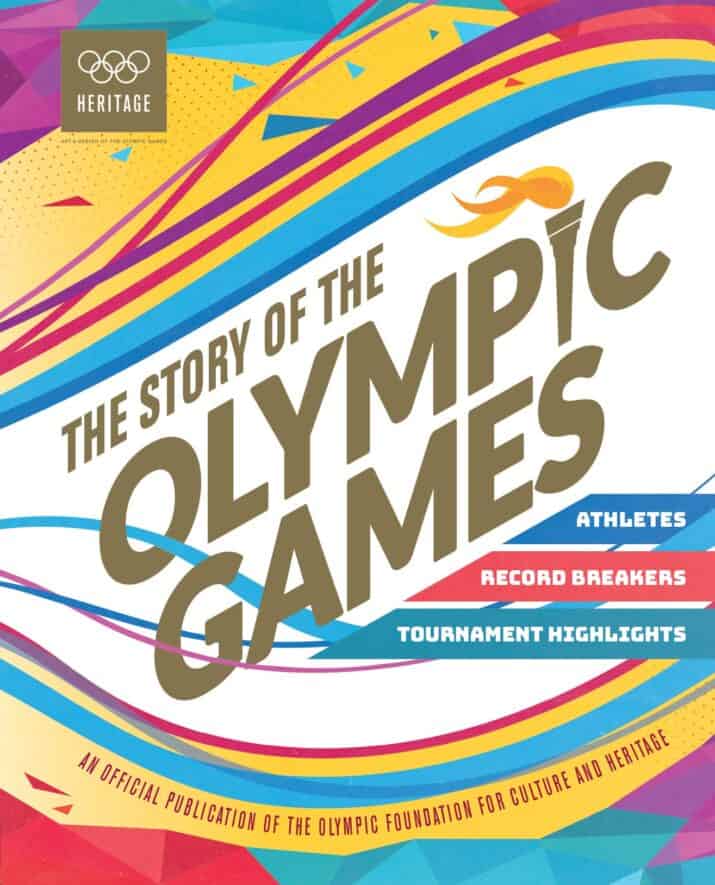 The Story of the Olympics Games by The Olympic Museum
Starting with the history of the ancient Olympic Games, learn how a man named PIerre de Courbertin decided to modernize the ancient sports festival which launched in Athens in 1896. This offical book, created in association with the Olympic Museum in Lausanne, takes kids on a historical journey from those first Olympic games all the way to the present day. Photographs, artifacts, and illustrations catch your eye as you read the history, facts, and mini-biographies throughout this beautiful book. 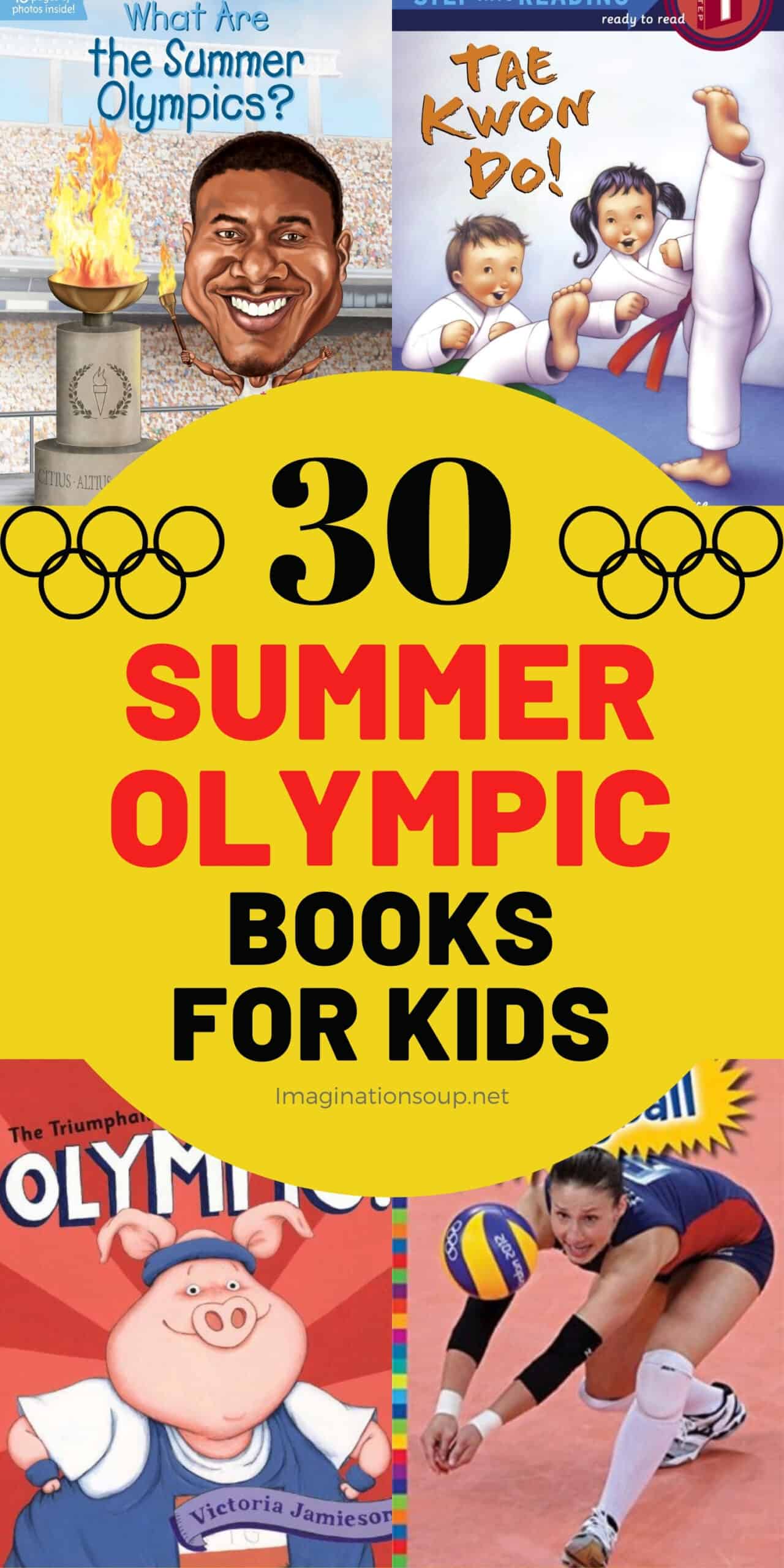 The Best Basketball Books for Kids of All Ages

Reading (and Writing) Apps for Kids 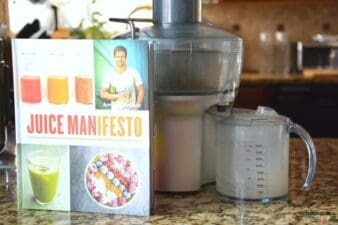 Where to Find Diverse, Multicultural Books for Kids