Kids can feel more anxious during the back-to-school season. Part of their concern is about friendships, old and new; as well as worry about revealing who they really are. Even my teenager says she doesn’t want to get bullied so she won’t tell anyone she likes geeky things like Lord of the Rings. Which makes me only the more eager to help her and other kids know that being your true self can be accepted, too! And that sometimes the best friendships are with people who are different than us.
Books that share stories can be helpful to spark deep conversation. Because I don’t believe in lecturing kids — that never works. Better to listen and have conversations where I ask more questions than give advice. I think sharing my own stories about friendships, even now as an adult, can be helpful, too.
How about you? How do you help kids value themselves? Make friendships?

9 New Picture Books About Friendship & Being Yourself 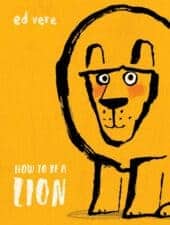 How to be a Lion by Ed Vere
Leonard is a gentle lion who loves to feel the sun warm his back, think, daydream, write poetry, and make friends with a poetic duck named Marianne. His life is peaceful. When the other lions mock Leonard’s behavior choices (he is not fierce and doesn’t eat duck!), Leonard wants to show them there is another way. He and Marianne express their thoughts with a poem about the many ways to be a lion. “Why don’t you, be you . . . / And I, will be I.” Red and orange colored illustrations set a peaceful, compassionate tone. Celebrate your unique way of being with this beautiful story about a lion who does; he knows and is okay with who he is. 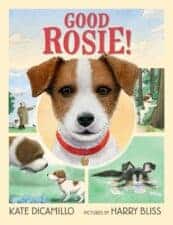 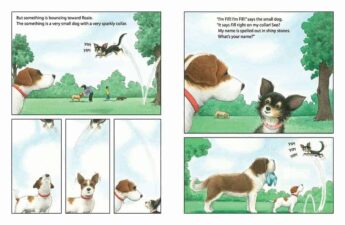 Good Rosie! by Kate DiCamillo, illustrated by Harry Bliss
Award-winning author, Kate DiCamillo, shares the story of a lonely dog named Rosie. Her owner, George, is worried so he takes her to a dog park. At first, the dogs she meets overwhelm Rosie– Maurice is big and growly and scary. Fifi is hyper and bouncy and talkative. It takes some getting used to each other and compromise (no eating Fifi, Maurice!) but the three become good friends. I like the realistic portrayal of how friendships can be tricky and take some figuring out. I love the beautiful watercolor cartoon panels. 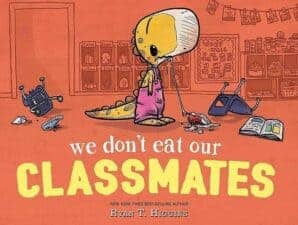 We Don’t Eat Our Classmates by Ryan T. Higgins
You are going to read this book multiple times — it’s so funny while being profound “Sometimes it’s hard to make friends with children,” said her dad. “Especially when you eat them.” After a rough first day at school where she eats her classmates, gets scolded by the teacher, spits them out, and doesn’t make any friends, Penelope’s dad explains that “children are the same as us on the inside. Just tastier.” HA. The next day, Penelope eats her classmates again. She just can’t stop herself! However, when the class goldfish chomps on Penelope’s finger and it HURTS, she realizes that it’s no fun to be someone else’s snack. It hurts. EMPATHY!! So even when her classmates look delicious, Penelope tries to remember what it felt like…and resists eating them. Which means she has friends and playmates at school. Also on: Essential Back-to-School Books for Kids & Best 2018 Picture Books & Picture Books About Manners 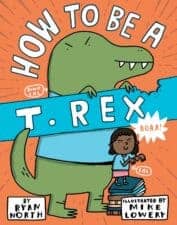 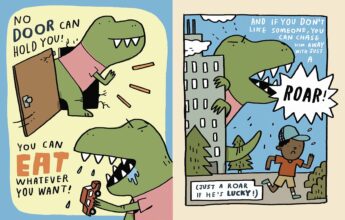 How to Be a T Rex by Ryan North, illustrated by Mike Lowery
In her desire to be much cooler than her human self, Sal decides to be a T. Rex instead. And she can help you become one, too. The rules are pretty simple — be fierce, unafraid, don’t follow the rules, and take things from others. Except, Sal learns there are a few downsides because your parents, friends, and even your dog aren’t super happy with your new behavior. How about a compromise? A dino/human hybrid who doesn’t let people push her around but doesn’t stomp on any humans either. I love the eye-catching cartoon panels, colorful illustrations, and handwriting typefaces –they make this book really an engaging story with life lessons about behavior and being our best selves. 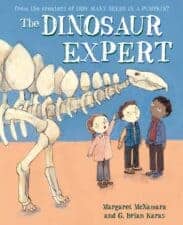 The Dinosaur Expert by Margaret McNamara and G. Brian Karas
For girls who aren’t sure if they can be scientists, this is a great story! Kimmy is excited about the field trip to the museum — she’s an expert on dinosaurs. But when Jake tells her that girls aren’t scientists and shows her the scientist photos on the wall — of all men, Kimmy feels discouraged from sharing her knowledge. She shares a little with her teacher, Mr. Tiffin one on one. Then, she and her class look at an exhibit of a new dinosaur discovery made by a woman scientist. It gives her back her voice. “When I grow up, I want to be just like her, Kimmy said. / “I think,” said Mr. Tiffin, “you already are.“ 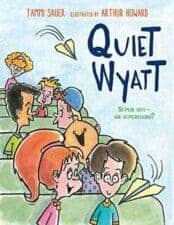 Quiet Wyatt by Tammi Sauer, illustrated by Arthur Howard
For all the quiet kids in the world, this book shows YOU matter and you can be friends with people who aren’t like you. Wyatt’s quiet life isn’t quiet on a class field trip when he’s paired with Noreen — his exact opposite. In a hilarious contrast of personalities, Noreen talks non-stop and trailblazes right into trouble. Luckily, Wyatt is an excellent ninja so he can save Noreen from the rock slide. “Wyatt smiled. Quietly of course. / He still liked quite. // He also liked having a friend.“ 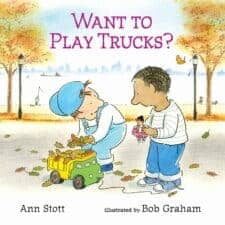 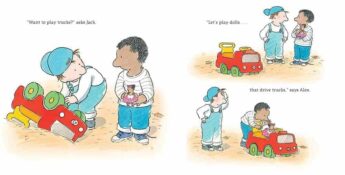 Want to Play Trucks? by Ann Stott, illustrated by Bob Graham
Jack likes big trucks. Alex likes dolls. When they meet at the sandbox to play, they’ll play dolls that drive trucks. When they get into a fight about dolls in tutus driving a crane, they work it out. Althought they both like different things, these friends also have other things in common — like playing together and eating ice cream. This story models that friends can be different from each other and that boys can like dolls. 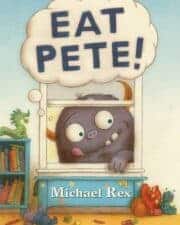 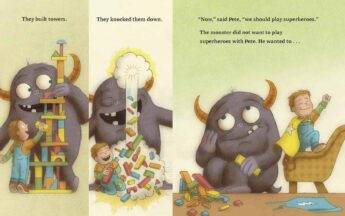 Eat Pete! by Michael Rex
When the boy named Pete invites the monster to play, the monster wants to eat Pete but instead, he plays trucks and pirates. Until he can’t resist and eats Pete. But playing alone without Pete isn’t as much fun. What will the monster do now? Because friends make everything more fun. 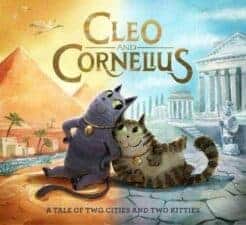 Cleo and Cornelius: A Tale of Two Cities and Two Kitties by Elizabeth Nicholson, Janine Pibal, and Nick Geller, illustrated by Michelle Thies
Rich illustrations help narrate the story of two kitty cousins who lived in ancient Egypt until one, Cornelius, travels to Rome. His cousin, Cleo misses Cornelius so he sets off to find him. Even though the city of Rome is not as quiet and boring as in Egypt, Cleo prefers to be at home in Egypt. The settings in this adaptation of City Mouse and Country Mouse will give young readers a taste of ancient Rome and Egypt, perhaps sparking further reading. 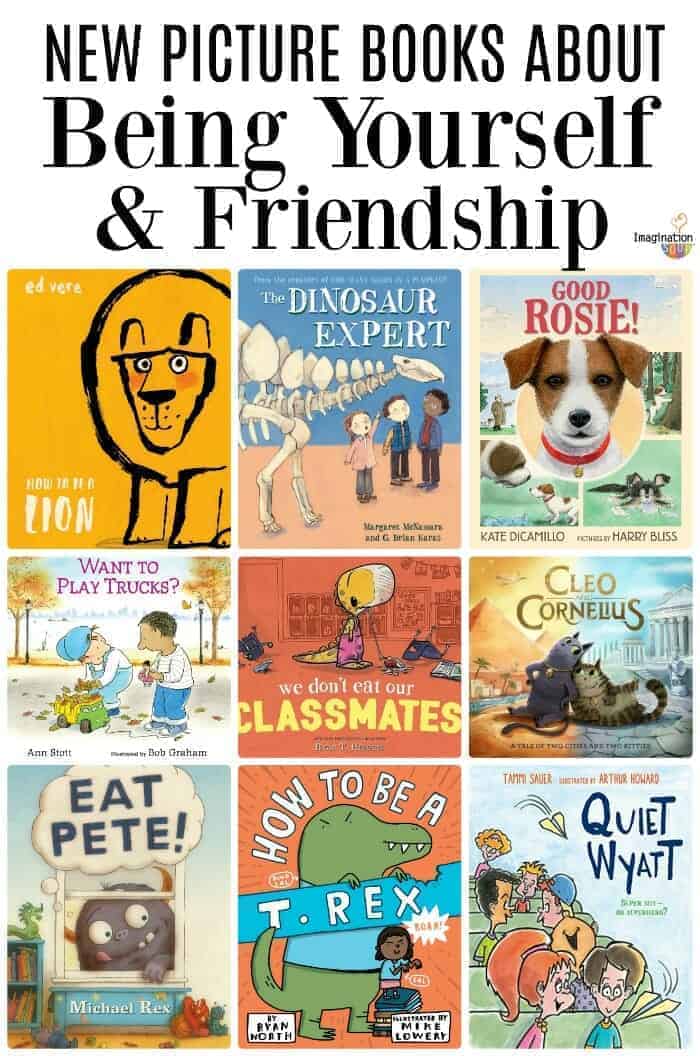