Hi, again! I’m Josh and I write picture books for kids and the adults that read to them. I visited Imagination Soup once before to share my Seven Secrets to Raising Eager Readers. And today I’m here to discuss Alphabet Books.

Now you might be thinking, “How can an alphabet book not be an ABC book? I need some examples!”

Well, my friend, that’s what I’m here to provide (in alphabetical order, of course). 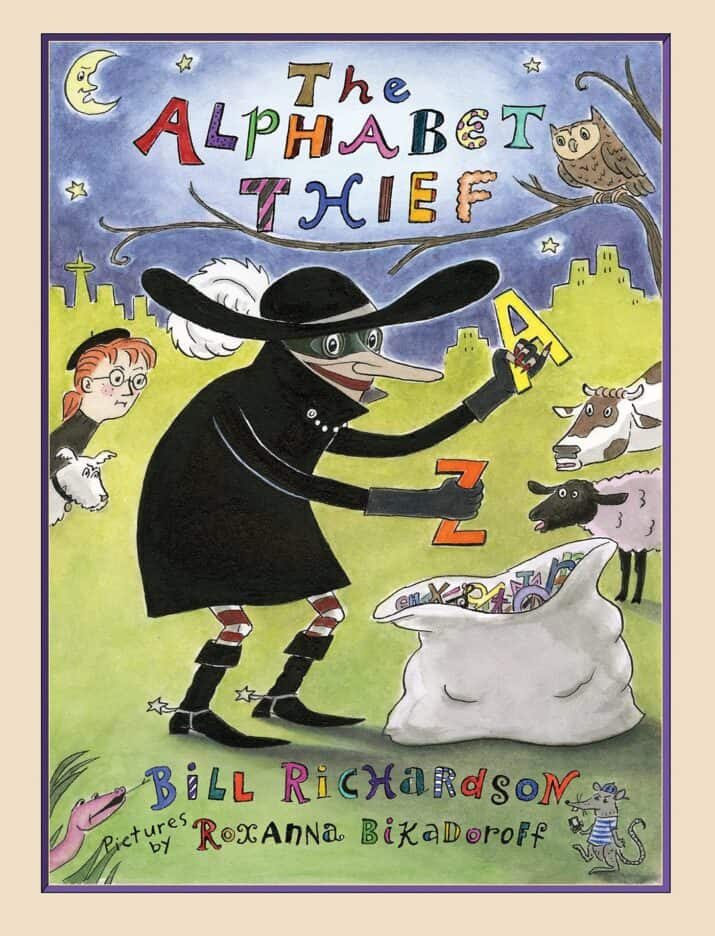 The Alphabet Thief written by Bill Richardson and illustrated by Roxanna Bikadoroff
In this little rhyming tale, the titular burglar steals a new letter on every page, and with every swipe, turns coats into cots, bowls into owls, spices into spies, and so on, cleverly working their way through the alphabet. While the bandit does go from A to Z, I’d hardly characterize this book as an ABC book – but it will make word nerds of the world jubilate.
Amazon Bookshop 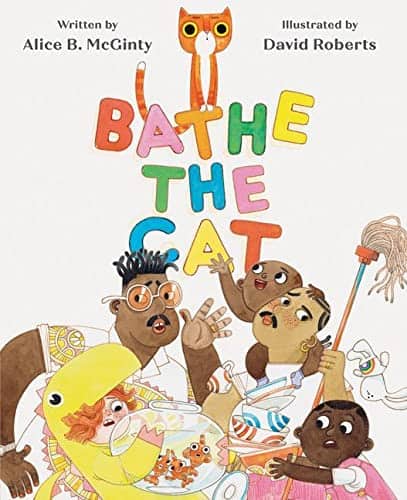 Bathe the Cat written by Alice B. McGinty and illustrated by David Roberts
In preparation for Grandma’s arrival, a family makes their chore list using the magnetic alphabet on the fridge. Unfortunately, the pesky cat keeps mixing up the words and letters leading the family to hilariously mow the floor, mop the fishes, feed the lawnmower, and perform more ridiculous activities – all to the delight of the reader.
Amazon Bookshop 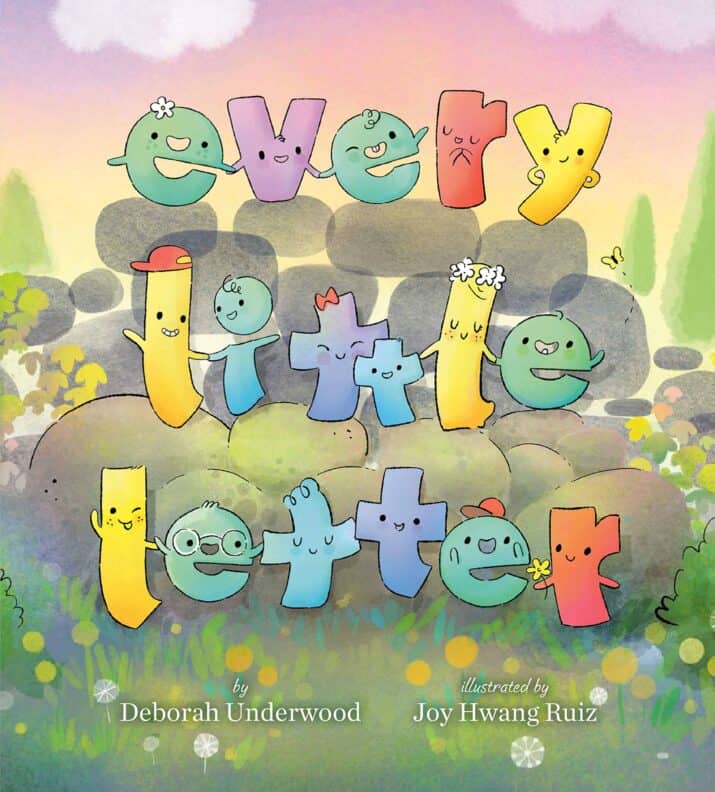 Every Little Letter written by Deborah Underwood and illustrated by Joy Hwang Ruiz
In a world where letters all live in separate, walled-off communities, a little h and a little i find a hole in the wall separating them. Unfortunately, as soon as the big H’s find out about this hole, they board it up. This doesn’t stop the lowercase letters from finding ways to interact with each other (by sending paper airplanes) and soon they develop a plan to open up the world to a whole new language. This is a sweet and endearing story of friendship and opening minds.
Amazon  Bookshop 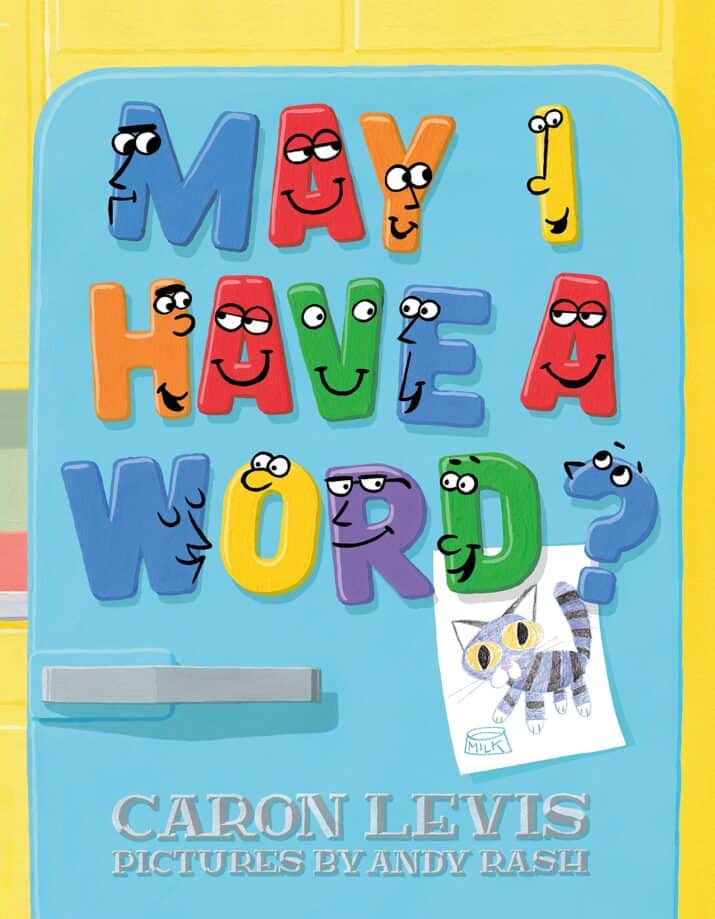 May I Have a Word? written by Caron Levis and illustrated by Andy Rash
The letters C and K face off in an epic battle over the ‘ck’ sound. The characters are all letter magnets on a fridge-world background and many of the words they spell and fight over are illustrated as children’s drawings held up by said magnets – the whole format is really creative, kid-friendly, and super entertaining. And of course, it’s a sweet friendship story, to boot.
Amazon 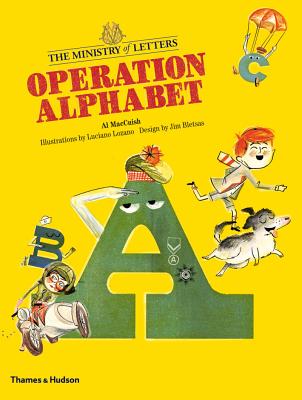 Operation Alphabet written by Al MacCuish and illustrated by Luciano Lozano & Jim Bletsas
When Charlie Foxtrot can’t concentrate or stay awake at school, the Ministry of Letters assigns Colonel A in command of the daring mission to help Charlie learn to spell and read. This quirky book has a throwback feel (despite being published in 2011), both in the illustration style reminiscent of the 1960’s, and the fact that it’s a bit longer and thicker than today’s average picture book at 64 pages.
Amazon  Bookshop 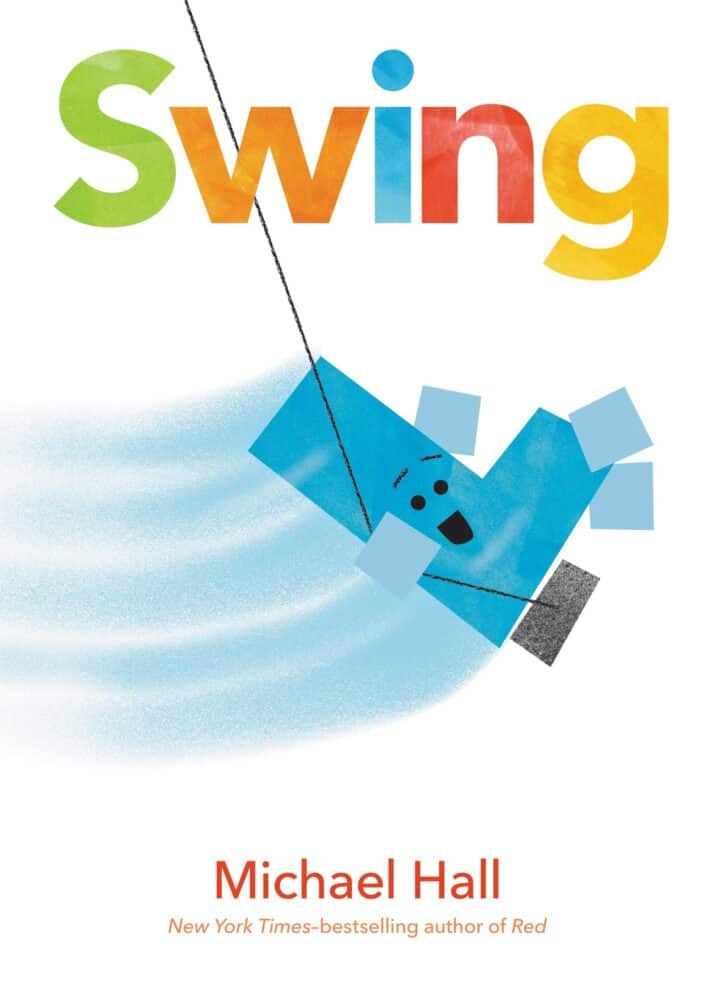 Swing written and illustrated by Michael Hall
In this charming story about the letters L, V, E, and O, they learn to put their many prejudices aside (and there are many – where they come from, what groups they’re a part of, and what they look like) and eventually appreciate each others’ differences as well as what they can become together. Though it appears simple on the outside, this book has depth and may spark important conversations.
Amazon Bookshop 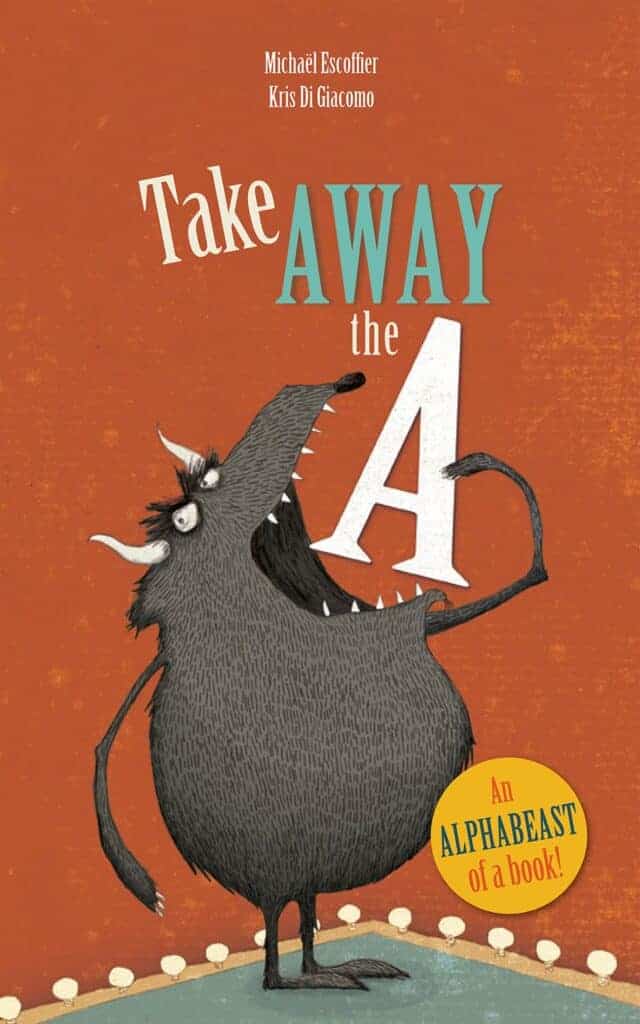 Take Away the A written by Michaël Escoffier and illustrated by Kris Di Giacomo
This might be the closest to an ABC book in the list, but it’s still more of a logophile’s dream. Each spread has an illustrated example of what a word would look like both with and without each letter. A beast is best. The bride goes for a ride. The chair has hair. And so on. It’s highly entertaining and as clever as it gets. And maybe it would help someone learn their ABC’s. Maybe.
Amazon Bookshop 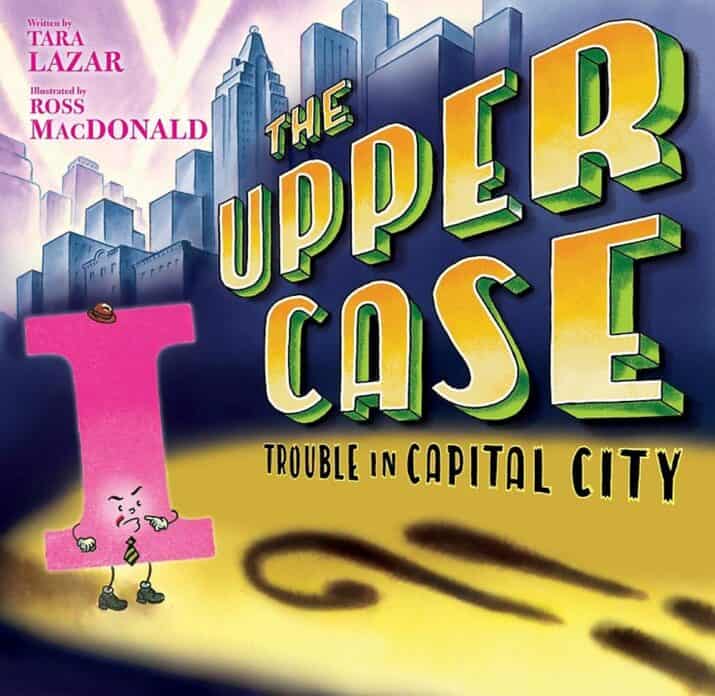 The Upper Case written by Tara Lazar and illustrated by Ross MacDonald
In this, the second in the supremely funny Private I series (including 7 Ate 9 and Time Flies), when capital letters begin to go missing, Private I is on the case. Who could be behind this? A disgruntled lowercase letter? A number with a grudge? Could it possibly be b (lowercase b, that is)? This whole noir-inspired detective series will entertain word lovers, pun lovers, mystery lovers, and picture book lovers both big and small (or should I say uppercase and lowercase?).
Amazon Bookshop 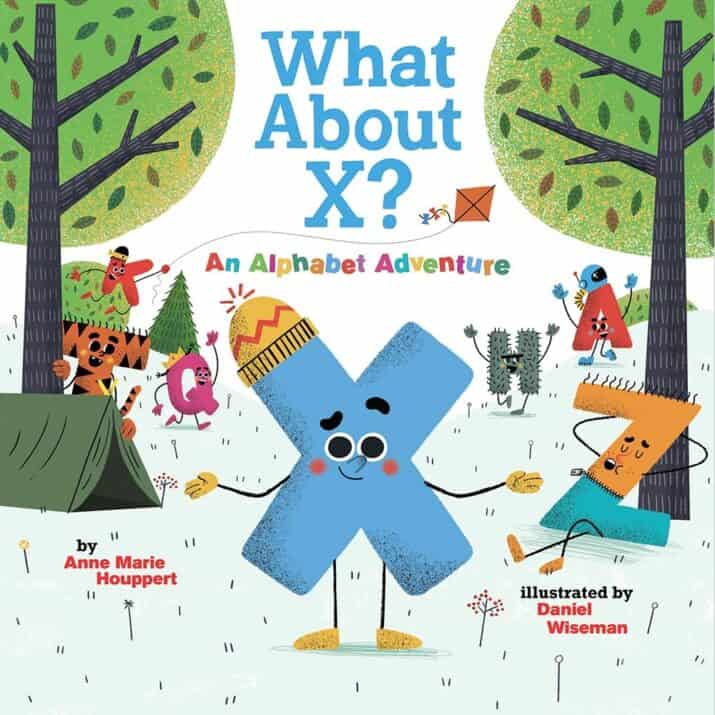 What About X? written by Anne Marie Houppert and illustrated by Daniel Wiseman
When the letters of Alphabet Academy prepare for a camping trip, what starts off as a traditional ABC book eventually goes off the rails. All the letters bring traditional, ABC-based camping supplies (A brings apples, B brings binoculars, C brings canteens, etc). But when it gets to X’s turn, he’s nowhere to be found. Why? Because X can’t find anything appropriate to bring. Whatever is the 24th letter of the alphabet to do? This book has a perfect (and still I didn’t see it coming) ending and it’s sweet and I loved it.
Amazon Bookshop

You might have one final question, “Why you, Josh? Why are you sharing this list of Best Alphabet Books for Word Nerds?”

And the answer to that is: because of My Pet Feet.

My Pet Feet is a new book that I wrote, illustrated by Billy Yong. 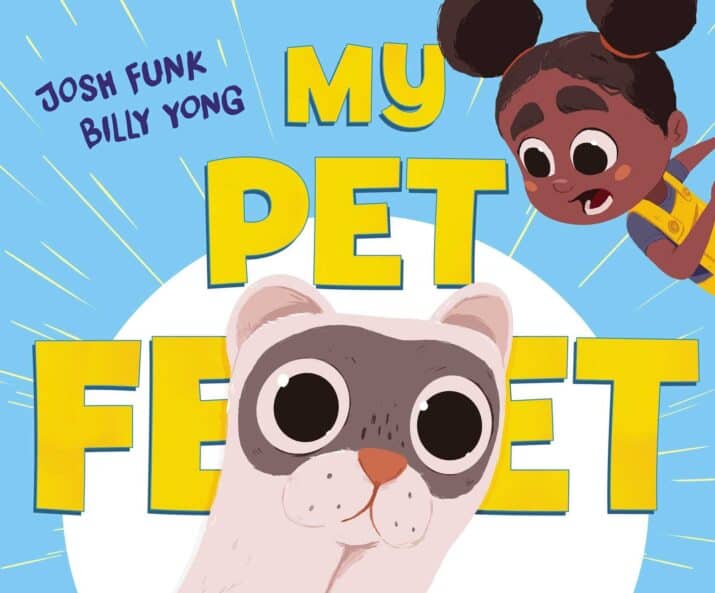 In My Pet Feet, the letter R has disappeared and a pet ferret has turned into pet feet. That’s right, feet. But that’s not all – loads of other things in town that are now missing R’s – flying cows (not crows), galloping hoses (not horses), babbling books (not brooks), and many many more. How will the town (and the feet … I mean, ferret) be saved?! I’m sure you know I’m not gonna spoil it.

Oh, and this entire book was written with only 25 letters of the alphabet, so while it is an alphabet book, it is not an ABC book. And truth be told, I think it’s my cleverest book yet. I hope you enjoy it. And laugh a lot. And I hope you don’t learn your ABC’s from it.

I’m just kidding. You can learn from it (if you want). 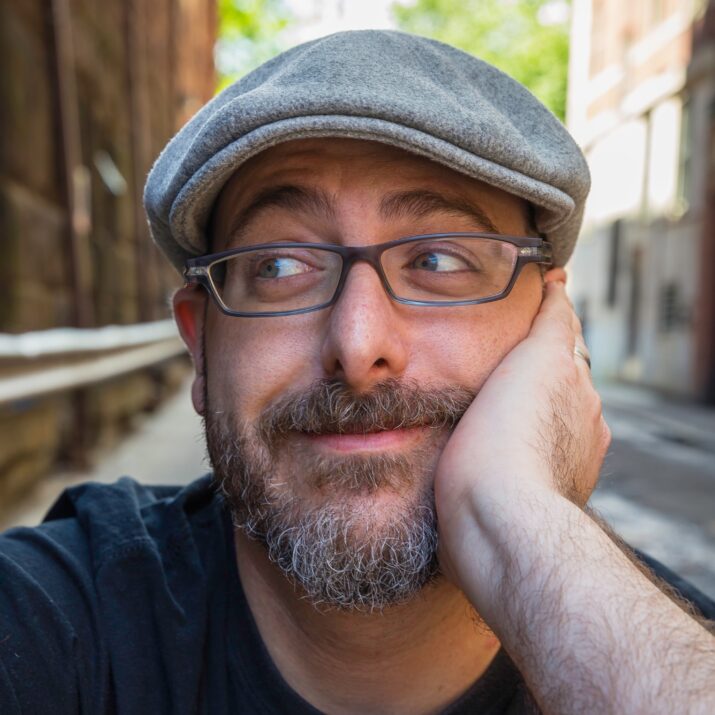 Josh Funk writes silly stories such as the Lady Pancake & Sir French Toast series (including The Case of the Stinky Stench, Mission Defrostable, Short & Sweet, and the forthcoming The Great Caper Caper), My Pet Feet, the How to Code with Pearl and Pascal series (including How to Code a Sandcastle and How to Code a Rollercoaster), the It’s Not a Fairy Tale series (including ​It’s Not Jack and the Beanstalk, It’s Not Hansel and Gretel, It’s Not Little Red Riding Hood, and the forthcoming It’s Not the Three Little Pigs), the A Story of Patience & Fortitude series in conjunction with the New York Public Library (including Lost in the Library and Where Is Our Library?), Dear Dragon, and more; and coming soon: Dear Unicorn in the fall of 2023!

Since the fall of 2015, Josh has visited (or virtually visited) over 650 schools, classrooms, and libraries 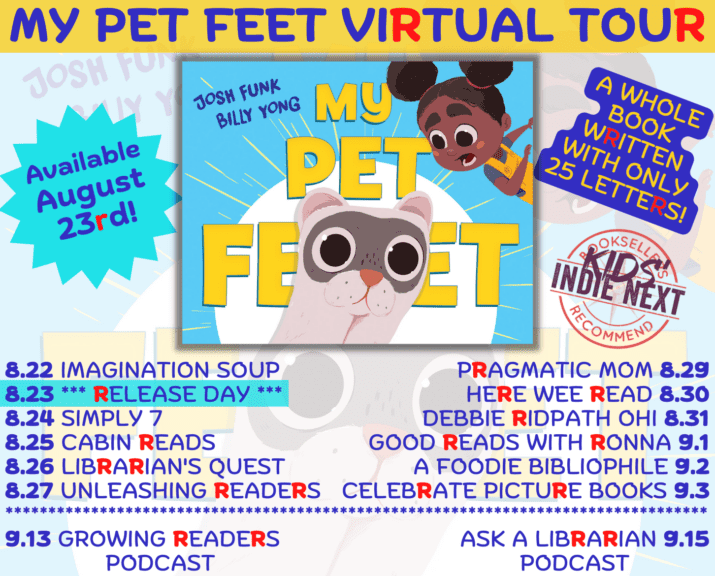 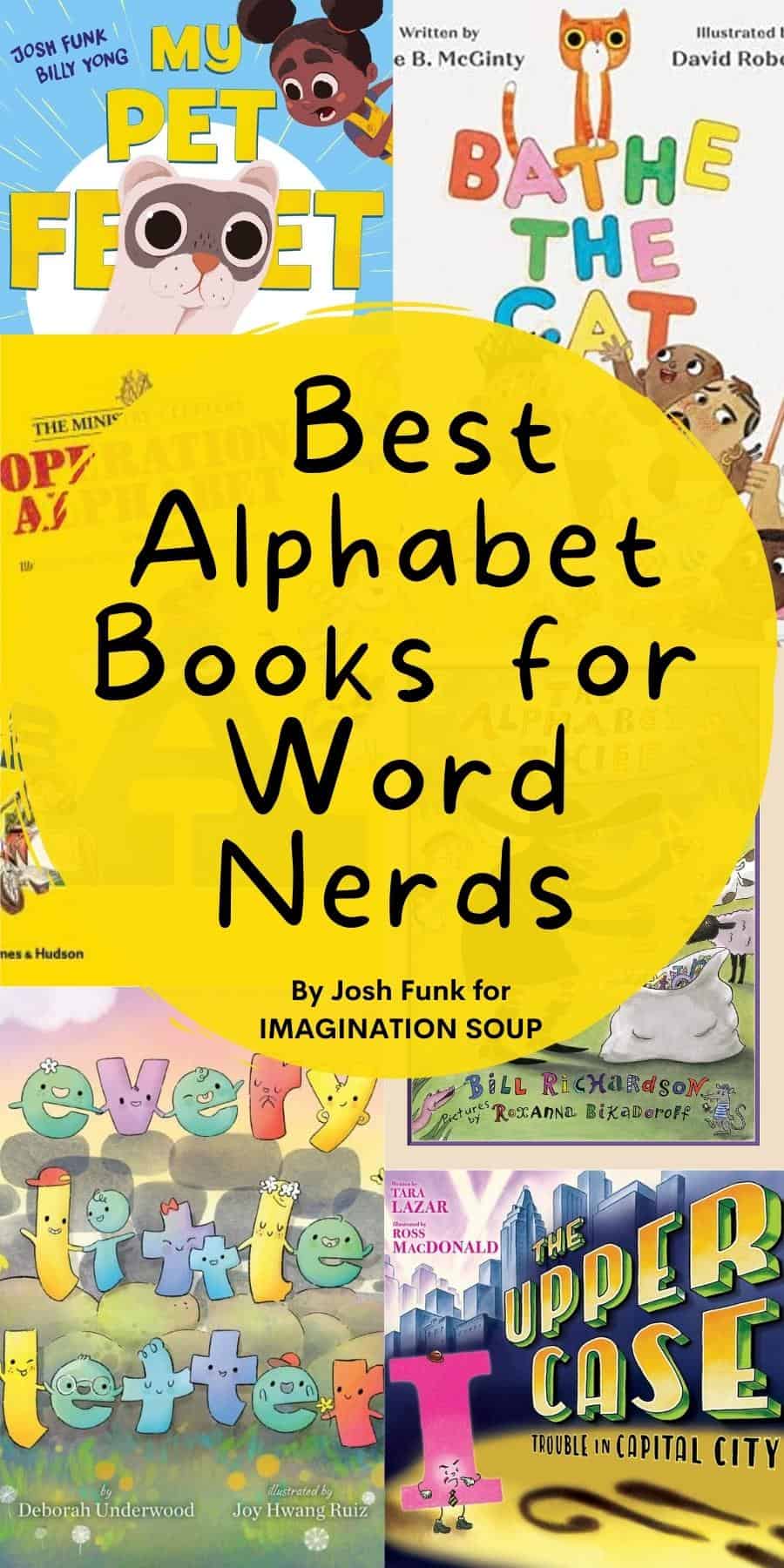 20 Picture Books about Storytelling (and Writing Your Own Story) 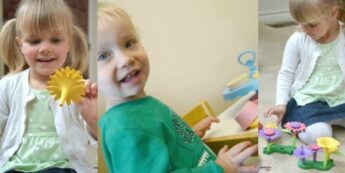 Play: How to Raise a Happy, Creative, and Smart Child