What an amazing month for middle-grade titles! Here are my favorite books to share with you and the readers in your life. ANIMAL ADVENTURE / CHESS
I highly recommended this book as a family read-aloud choice — it’s a heartfelt story of friendship, adventure, and care for animals that will appeal to many ages and interests. Our narrator, Clementine, is a genius lab rat who is freed by a lab tech and hidden in the mailbox of a former chess champion. Clementine narrates everything that happens in letters to her friend Rosie, a chimpanzee who is still trapped in the lab. She’s found by the chess champion’s grandson, and he and his grandfather vow to keep her safe which is tricky because the lab is hunting her down. Clementine’s voice is compelling and believable. I loved this book so much and didn’t want it to end! The Other Side of the River by Alda P. Dobbs

HISTORICAL FICTION
A stunning sequel to Barefoot Dreams of Petra Luna, this poignant historical story about family, literacy, immigration, growth mindset, and community shows Petra Luna’s grit and determination to help her family and survive in their new home in Texas after escaping the Mexican Revolution. 12-year-old Petra Luna is a complex, likable girl with big dreams and fierce loyalty. Once she gets the family to San Antonio with a bartered train ticket, she finds them shelter and gets a job. She becomes close with Sister Nora who encourages and supports Petra’s dreams of learning to read while she’s still providing for her family. Hither and Nigh by Ellen Potter

FANTASY
Guaranteed to enthrall with masterful storytelling and wildly inventive world-building, Hither and Nigh draws you into a magical, multi-layered story of adventure and heart. When Nell is forced to join the Last Chance Club or be expelled from school, she’s surprised when the club’s shifty teacher gives the random group of students lessons in magic! This is the start of Nell’s search find her missing brother who she thinks is still alive and can be rescued–in the magical world of Hither. She leaves her world of Nither where she hopes to track the poachers who kidnap non-magical children with big imaginations like her brother. It’s one of my favorite books of 2022 — and ever. DYSLEXIA / GYMNASTICS / VERSE
Claire is the best at gymnastics, but she’s not the best at reading. In fact, she can’t read AT ALL–and has fooled everyone for years. She lashes out to protect her secret and gets sent often to the principal. The principal figures out that Claire needs learning testing, but Claire’s mom is adamantly against testing. Claire’s friends, her sister, and a supportive teacher help her with word recognition — but she continues to ask her mom to let her get tested, which she eventually does. There’s so much to love about this fast-paced book in verse. I love that Claire is a fully developed character with efficacy who shows readers (and her mom) that having a learning disability doesn’t mean you’re not smart; it means your brain learns differently. This is a fantastic story for anyone who likes mystery, adventure, and well-developed, interesting characters. Max is living with the tragic aftermath of a night out that left one of his best friends in a coma. Initially, Max doesn’t want to think about what happened–that night when he snuck out to the Res but left before his friends did. He’s trying to navigate school with ADHD and being exceptionally tall, but Max decides he must discover the truth of what happened to his friend. He and a new friend named Sam discover that more than one person is lying. The Bluest Sky by Christina Diaz Gonzalez
HISTORICAL FICTION
Hector lives in Cuba with his mom and older brother in a communist-controlled state that imprisoned his now exiled dad. He loves math and his friends. He doesn’t understand why his mom would want to leave Cuba for the U.S. — and doesn’t see the lack of freedoms at first until, at his communist abuela’s prompting, their neighbors turn on them, and something unthinkable happens. Hector’s mom applies to leave Cuba during a short window where it might be possible for gusanos (worms) to leave. Their journey is fraught with complications and dangers. Every second of this book, I felt like I was living in Hector’s shoes. This book is excellent on every level– character development, plot, history, and writing. Highly recommended. 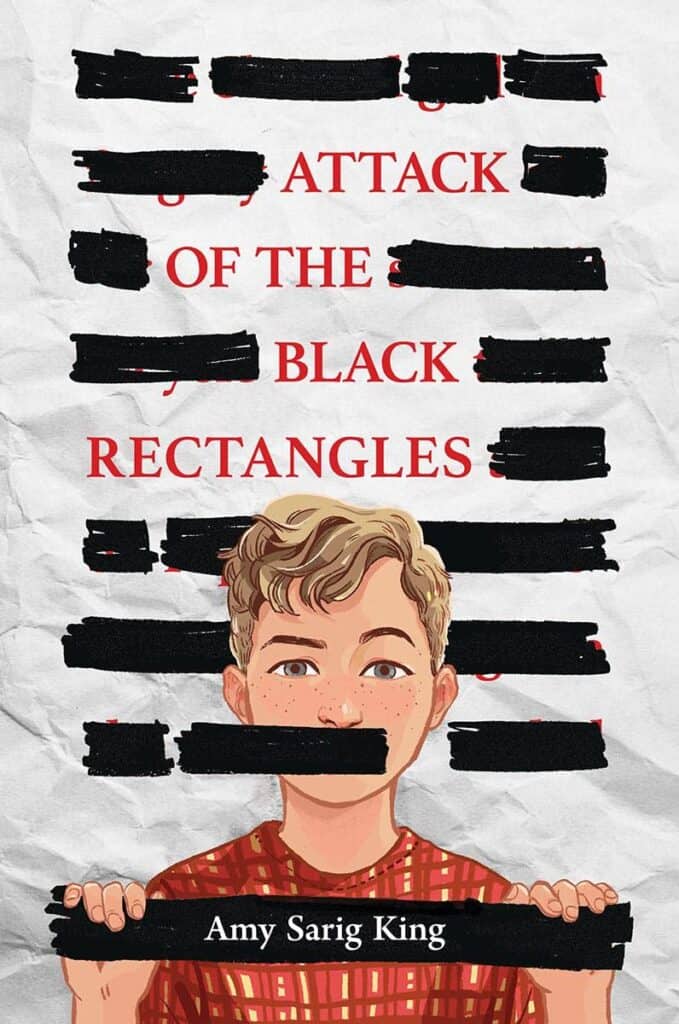 Attack of the Black Rectangles by A.S. King
REALISTIC / CENSORSHIP
Multi-layered and compelling with themes of censorship, family, crushes, and growing up… 6th grade Mac lives in a town that bans Halloween, pizza delivery, bright house colors, and staying out past curfew. At school, his book group notices that certain words and phrases are blacked out in The Devil’s Arithmetic by Jane Yolen. Mac and his friends Denis and Marci find the original book at a local bookstore and are furious that their teacher thinks they can’t handle the words. They talk to the principal, but she doesn’t support them, and their teacher acts smug and self-righteous about it. Meanwhile, Mac is also dealing with the aftermath of his mentally ill dad’s theft from their house and his granddad. Also, Mac has a crush on Marci– a compelling feminist character. (They eventually go to a dance together but decide they’re not ready to kiss.) I enjoyed the story; there’s a lot to discuss! Ravenfall by Kalyn Josephson
FANTASY
This is a wonderful magical adventure of friendship, family, and grief set at a sentient inn with interesting characters. (Like a Jabberwocky!) Anna lives with her extended family at their magical B&B with Otherworld and human world guests. A boy named Colin arrives and asks for sanctuary and help after his parents were murdered and his brother went missing. Anna wants to help him, but she doesn’t think her power to see ghosts is as helpful as her other family members’ powers. But, as they work together to unravel the secrets of his parents, Colin finds his own powers and Anna discovers her own strengths. But will they be enough to stop the menacing creature who wants to kill Colin? Goblin Market by Diane Zahler
FANTASY
Epic, enthralling, and a little bit creepy, this is a fantasy story that feels like a fairy tale...Lizzie’s big sister Minka gets tricked by a goblin in disguise selling fruits and promising love and freedom. Lizzie and their neighbor boy who loves Minka bravely enter the enchanted woods to save Minka. They must stop Minka’s goblin wedding and reveal the truth behind the glamor before it is too late. Haven: A Small Cat’s Big Adventure by Megan Wagner Lloyd
ANIMAL ADVENTURE
After an insecure start to her life, Haven lives in a safe home with the loving Ma Millie. But when Ma Millie gets sick, Haven bravely leaves the safety of her home to get help. On her journey, Haven befriends a fox who helps her through the woods to the farm and then the town. They don’t realize it, but all the while, they are stalked by a predator who attacks the fox just as they’re almost home. Adventure, danger, friendship, and new beginnings, this is a sweet story that any animal lover will enjoy. The Vanquishers by Kalynn Bayron

PARANORMAL
I loved this exciting paranormal vampire-slaying adventure! Boog and her friends’ parents are still obsessed with the old precautions to prevent vampires — even though they were all wiped out years ago. Or were they? When their friend Aaron goes missing, he reappears in Boog’s yard as a VAMPIRE. Someone turned him during a school skating party– but if Boog and her friends can kill his vampire maker within the time limits, their friend will turn back to human. The kids get caught sneaking around and discover their parents have BIG SECRETS about who the Vanquishers were, the heroic vampire hunters. Now they’ll have to work together to find the vampire that changed Aaron–and kill it. IN BOOK 2! We Were the Fire: Birmingham 1963 by Shelia P. Moses
HISTORICAL FICTION
An important, powerful book about civil rights, family, and agency set in segregated Birmingham in 1963. After Rufus’s mom gets remarried, his family moves from their Bully Hill shack into a bigger house in a white neighborhood–and it’s a problem for some of the white folks. Rufus watches it all– the way people are treated — and how the adults in his life stand up to racial inequality by protesting for human rights. His mom forbids him to attend the protests, afraid of what might happen to him, but Rufus disobeys her and stands up for what he believes is right. He joins thousands of other kids who peacefully protest later called the Children’s Crusade– even when the police and firemen spray them with water hoses. A must-read! 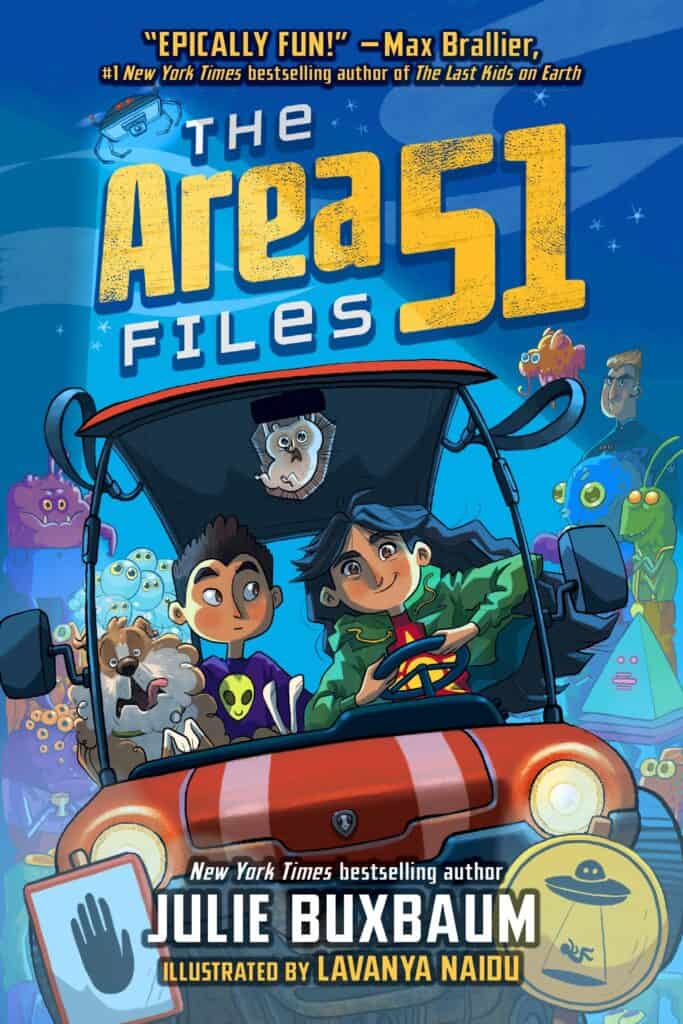 Area 51 Files by Julie Buxbaum, illustrated by Lavanya Naidu
SCI-FI
Sky moves to Area 51, a sanctuary for aliens, where her new guardian, her uncle. She’s sad that she can’t ever leave Area 51 or see her beloved grandma again but she makes friend with an alien boy at school. When a group of aliens is abducted, all clues point to Sky’s uncle. She and her friends try to solve who the culprit really is. It’s a funny mystery, adventure, and friendship story with aliens and illustrations! 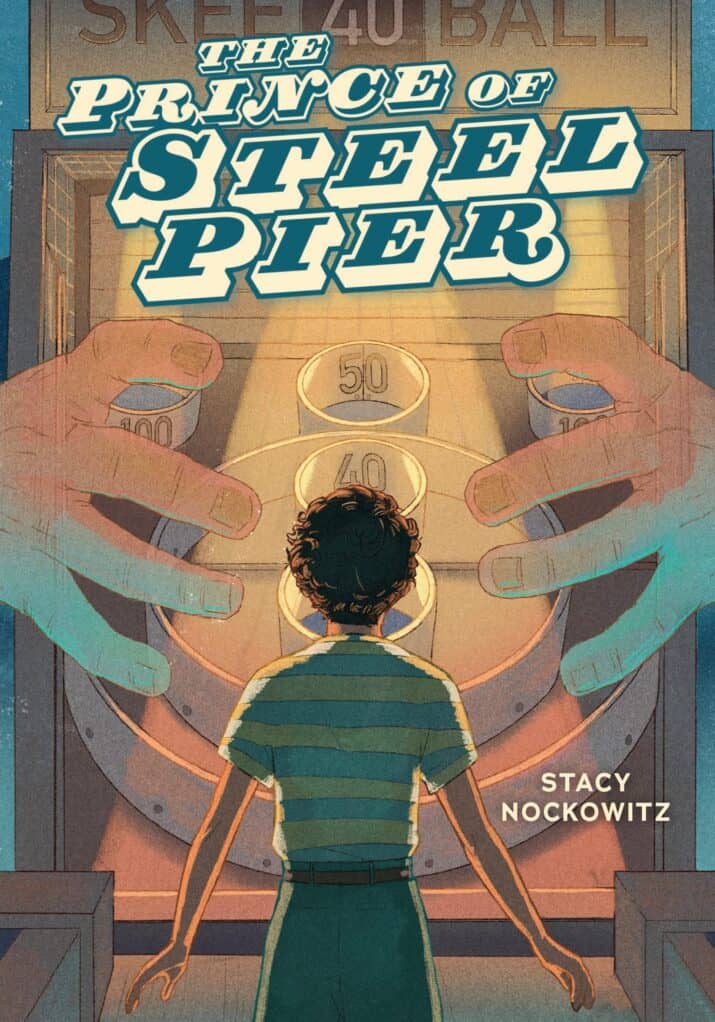 Prince of Steel Pier by Stacy Nockowitz
HISTORICAL FICTION
It’s 1975 and Joey is a Jewish boy whose family owns a hotel in Atlantic City. He’s a bit sheltered and accidentally gets involved with some shady gangsters. The mob boss tells Joey to hang out with his daughter while she visits for the summer. But he’s asked to hide something valuable, and as events unfold, he thinks about his Jewish faith, lying, legacy, and family. It’s a coming-of-age story with a strong atmospheric (New Jersey) setting. 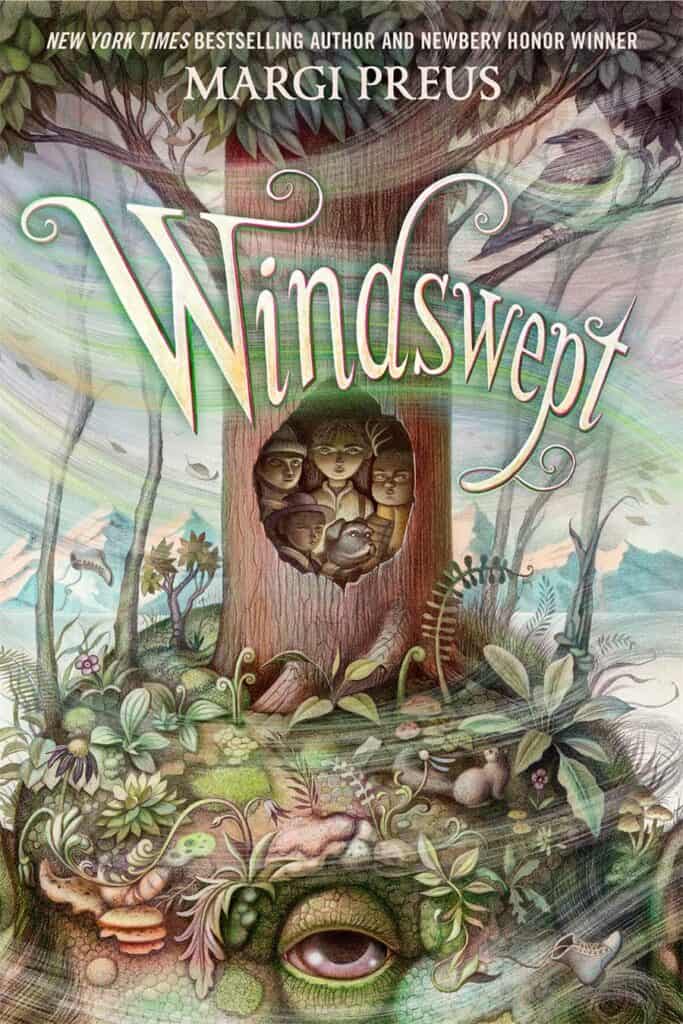 Windswept by Margi Preus, illustrated by Armando Veve
FANTASY
In a seemingly post-apocalyptic fairy-tale-ish world where The Powers That Be are in charge, books are banned, and kids called “Youngers” are vanishing with the onset of swirling windy snow leaving behind silver leaves, Tag and other children leave their community to search for their missing siblings. They meet three wise woman sisters who give them obscure clues, and they head toward the land of the trolls, beset by curses and trouble as they do. Lovely writing draws readers into a unique story featuring a courageous main character and friends that you will cheer for all the way! 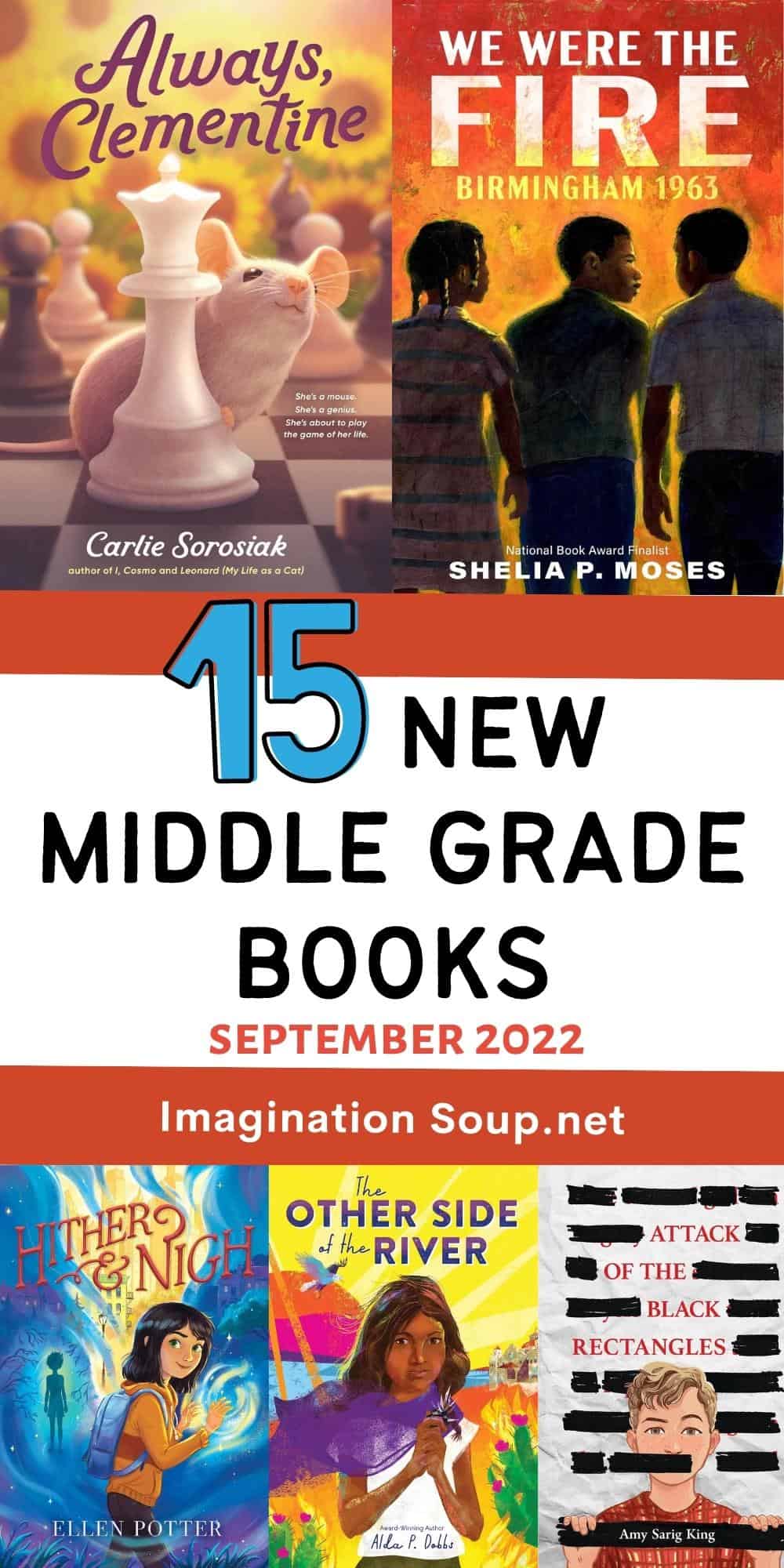 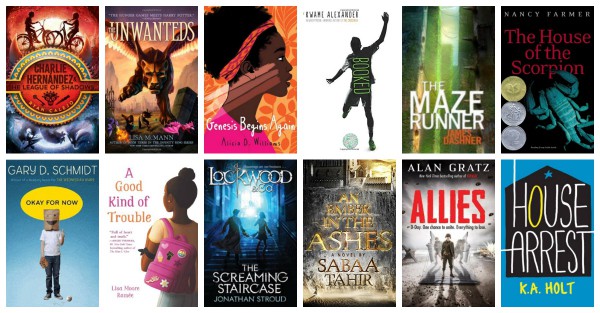