Here’s what’s new in beginning chapter books for spring 2018 — or at least, what’s new that I’ve read and liked. 🙂 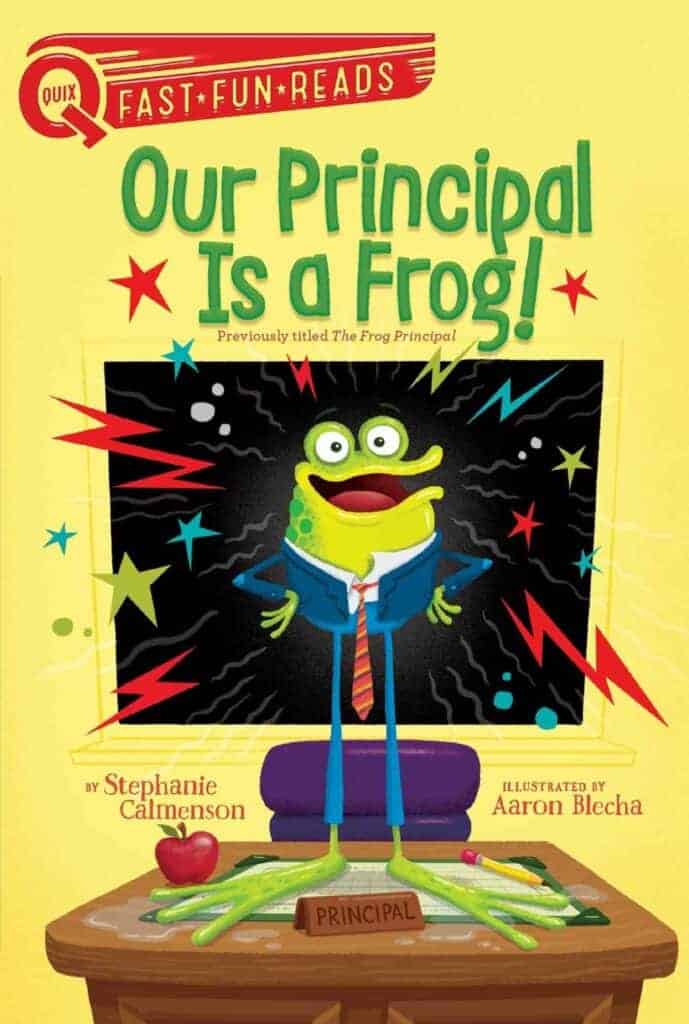 Our Principal is a Frog by Stephanie Calmenson, illustration Aaron Blecha (ages 5 – 8)I’m very excited about this new, SHORT, easy chapter book series called QUIX from Aladdin / Simon and Schuster. This an engaging story about a great school principal, Mr. Bundy, who is accidentally turned into a frog by a bumbling magician. But, not to worry. Mr. Bundy is a dedicated principal. He finds a way to keep running the school — even as an amphibian. Added to: Wholesome Chapter Books for Boys, Wholesome Chapter Books for Girls, Best Books for 7-Year Olds 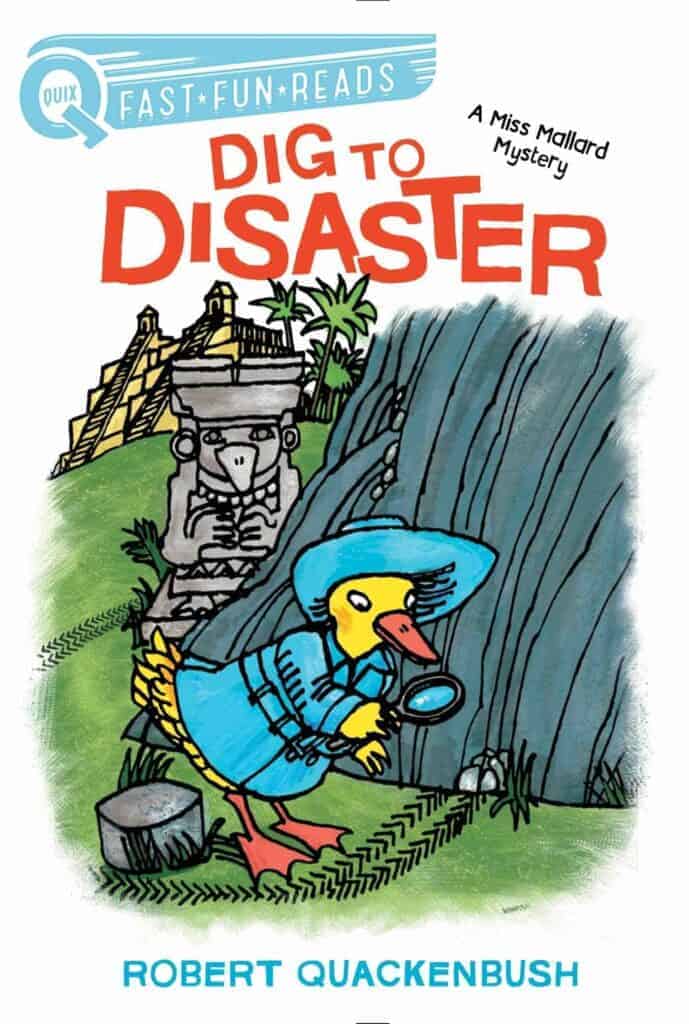 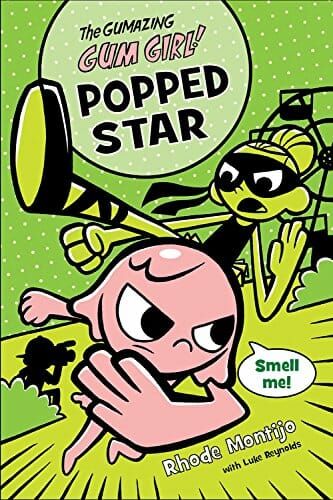 The Gumazing Gum Girl! Popped Star (Book 3) by Rhode Montijo and Luke Reynolds (ages 6 – 10)
Readers will love the bold, comic-style illustrations on every page. You don’t need to have read the other books previously to enjoy this one. Gabby Gomez has a problem. Ninja-Rina, a new tutu superhero, is stealing Gum Girl’s work and people’s attention. Gabby feels furious, especially when she sees that Ninja-Rina is staging her heroics. Will the two superheroes make peace in the ultimate showdown at the fair grounds? I like the Spanish words mixed in the dialogue and Gabby’s big life lessons about what makes a hero. 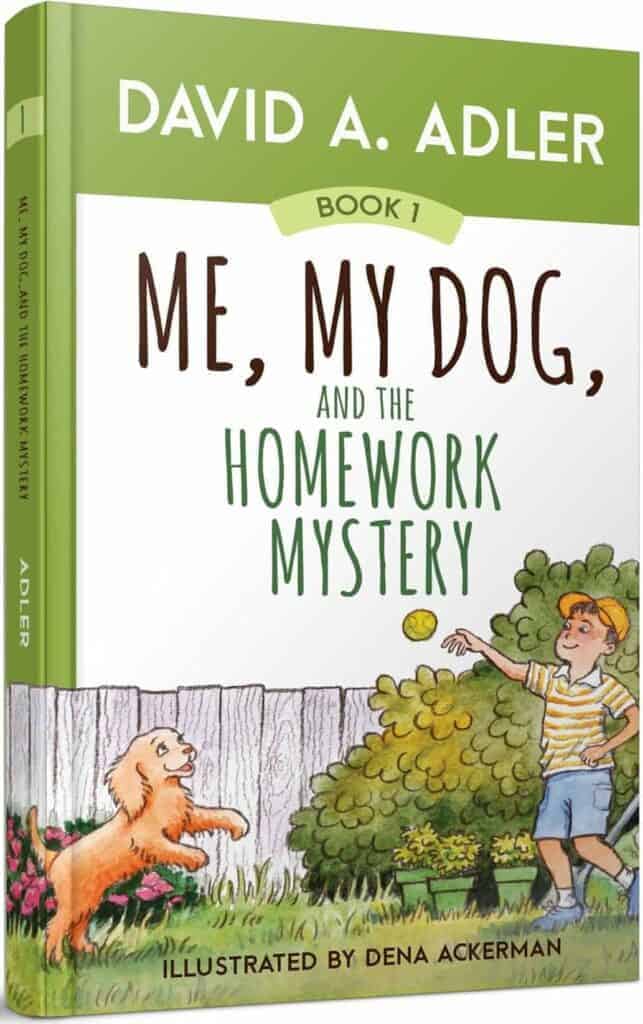 Me, My Dog, and the Homework Mystery (Book 1) by David A. Adler, illustrated y Dena AckermanFrom the author of the Cam Jansen Mysteries, Danny and his dog named My Dog help friend Michael solve the mystery of his missing homework. My Dog barks and knocks things over which makes Michael upset and positive that My Dog isn’t helping. When My Dog follows Michael’s little brother, Benny, under the crib, he accidentally solves the mystery. Michael’s homework is found! Also read: My, My Dog, and the Key Mystery Book 2. Simple, readable text. 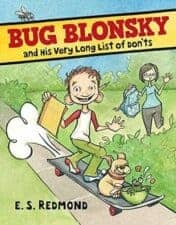 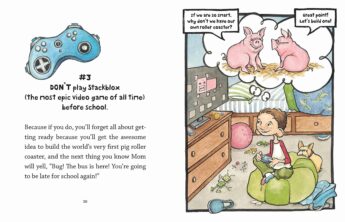 Bug Blonsky and His Very Long List of Don’ts by E.S. Redmond
HUMOR (ages 6 – 9)
Bug is a wiggly kid who has written a list of very important don’ts. His advice is clearly well earned since he knows just what will happen if he does those things. For example: Don’t spray whipped cream into your mouth for breakfast. Don’t make armpit fart sounds when Ms. Musnter bends over. And so on. Read exactly what happens when Bug does everything on his list of don’ts. Added to: Best Books for 7-Year Olds 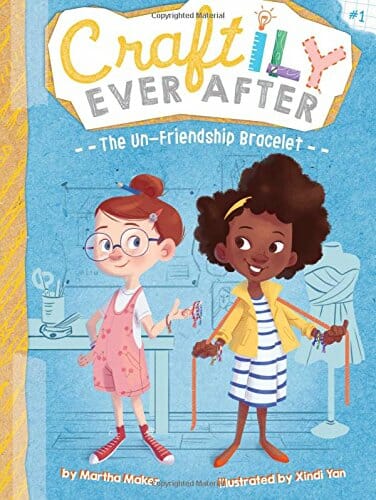 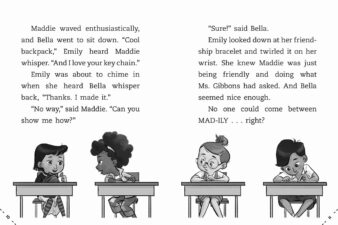 The Un-Friendship Bracelet: Craftily Ever After by Martha Maker, illustrated by Xindi Yan (ages 6 – 9)
While this is a familiar plot — new girl arrives, one of two best friends gets jealous when the other friend befriends the new girl — it’s a skillful treatment of how to work out your misunderstandings and be welcoming to everyone — even the boy who you sit next to in class. Also read book 2: Making the Band. 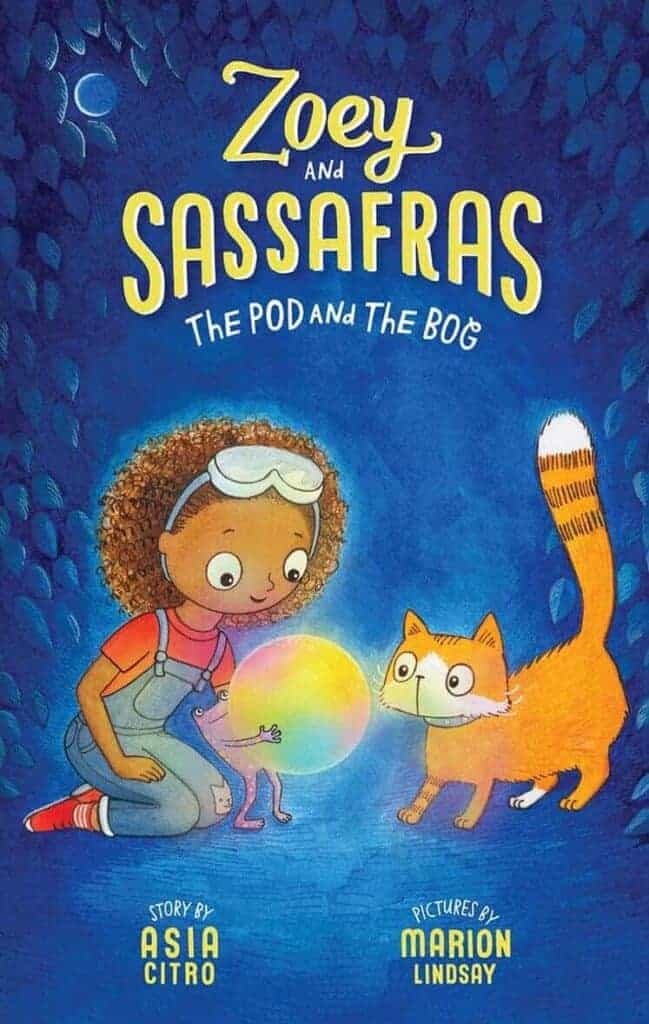 Zoey and Sassafras: The Pod and the Bog by Asia Citro, illustrated by Marion Lindsay (ages 7 – 9)
The Zoey and Sassafras book series continues to be interesting and educational with each new book. This fifth story has my favorite cover art yet — isn’t it gorgeous? Pip, the frog, finds a glowing seed pod which he brings to Zoey. Zoey realizes that in order to return the pod’s seeds to the best growing environment, she must figure out what conditions (soil, moisture, etc.) are best for the seeds’ growth. She does a lot of experimenting which results in some plants dying but eventual success. Great, fast-paced writing with lots of science and a charming story make this a must-own book. (Already on my book lists for 7-year-olds and wholesome books.) 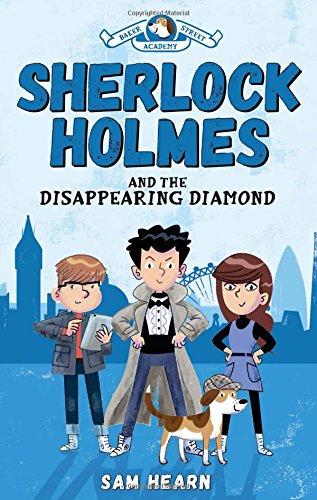 Sherlock Holmes and the Disappearing Diamond by Sam Hearn (ages 7 – 10)
This is a decent Sherlock introduction with age appropriate characters and a crime. Meet John Watson, the narrator and the new kid at school, who is befriended by Martha and Sherlock. When their class is on a school field trip, a weird fake-crime happens at the museum only Sherlock discovers it wasn’t a fake crime. In fact, a precious gem was stolen and Sherlock is sure he knows where the thieves hid it. Illustrations and scrap-book style entries make this visually appealing. Added to: Sherlock Homes Books for Kids. 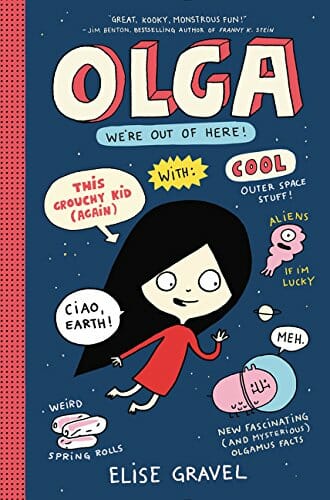 Olga: We’re Out of Here! by Elise Gravel (ages 7 – 10)
We fell in love with quirky Olga in book one. In this second book, Olga is sick of humans (introverts may relate?) and wants to leave earth. But where can she go? And what’s wrong with Meh, her pet alien? This plot, while funny and entertaining, also touches on important issues of connection and belonging. Amazing artwork throughout. 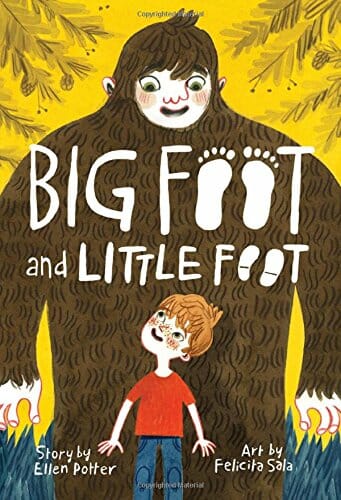 Big Foot and Little Foot by Ellen Potter, illustrated by Felicita Sala (ages 8 – 10)A curious young Sasquatch named Hugo wonders about humans and the big world outside his small forest area. After a glimpse of a human boy and mysterious letters are exchanged, Hugo finally meets Boone, the human boy. Hugo and Boone both have misconceptions about each other but they soon realize those preconceived notions are inaccurate and set about doing the things friends do — pretending and exploring. 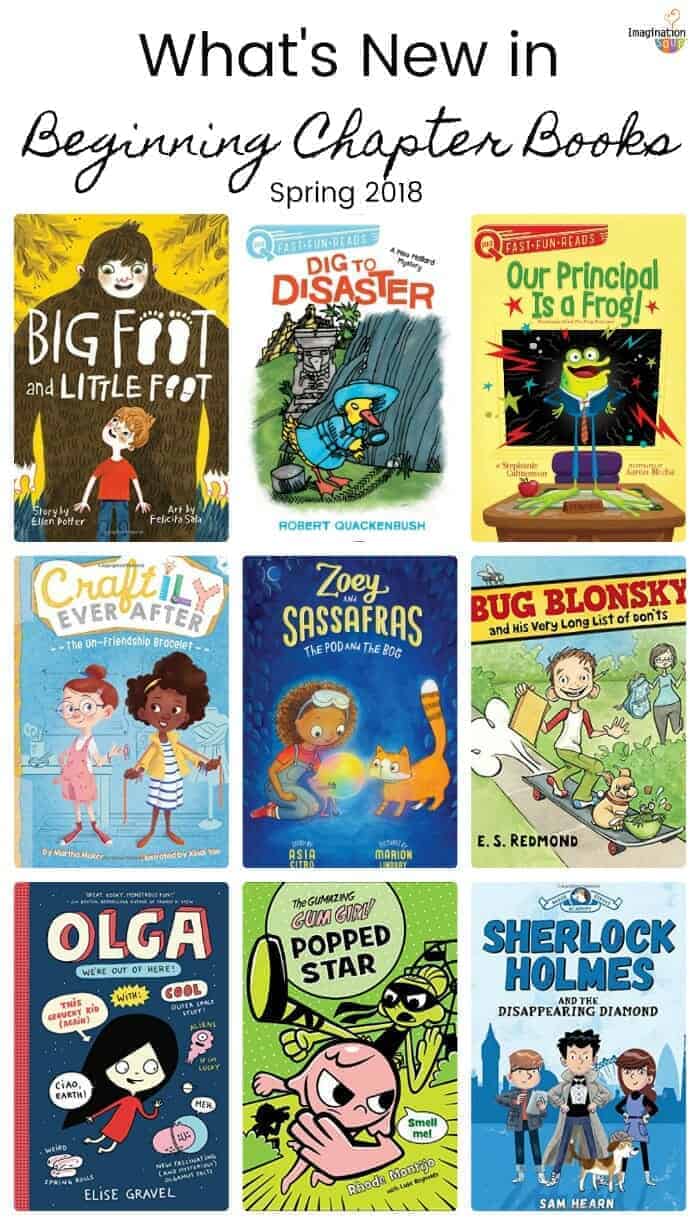 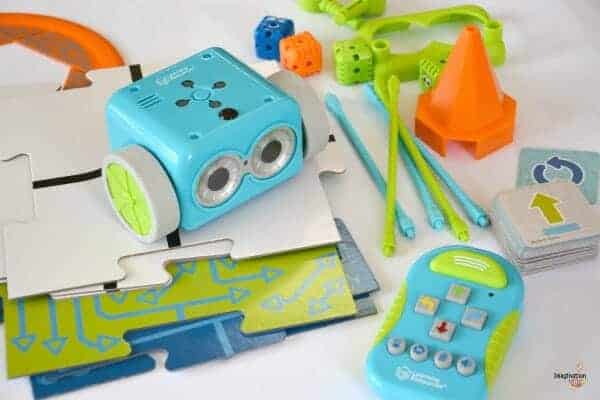 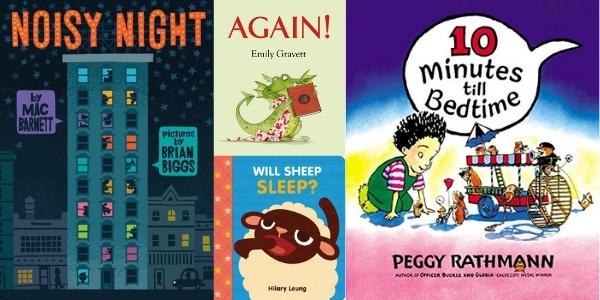 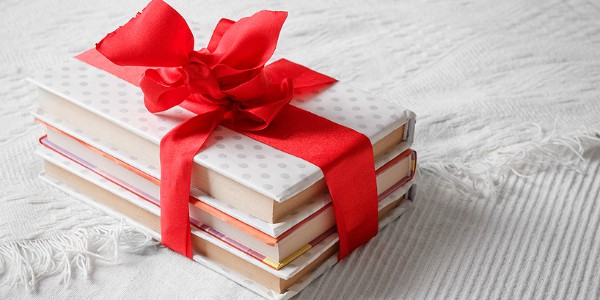