What’s worse? It could have been much less time.

The mold tester I hired when we all got sick missed finding any mold and the next testers several years later missed finding all of the mold spots in our house, costing us even more time.

When we moved into our house about 9 years ago, my youngest daughter, JJ, began having seizures. The first time, I had no idea I was seeing a seizure until the paramedics explained it to me. It wasn’t a tonic-clonic shaking. Instead, her eyes would go vacant, sort of staring off into space. Honestly, it looked like her soul had left her body. And her body? Her body was bizarre… limp, wet with urination and vomit, yet often with a twitch. Like one time, she rubbed her belly button in circles. Another time, she picked her nose compulsively. The first seizure lasted 45 minutes. The rest lasted just as long –until we stopped them with an injection. These put her into respiratory distress but that’s a whole different tangent… Needless to say, it was scary and awful. Her first neurologist told me she might be brain damaged if the seizures continued to last so long. I pretty much stopped sleeping and lived with intense worry and anxiety.

I’m positive that worry and lack of sleep are why I got the Epstein Barr Virus seven years ago. My daughter, AJ, got it at the same time, too — we don’t know which of us was first but it doesn’t really matter now. Later we would learn that EBV was probably what compromised our immunity making us unable to process the mold toxins that we’d been able to process before. As for my youngest daughter, we didn’t realize she was allergic to almost everything until recently (her only symptom was allergy shiners) but probably that’s why she also was susceptible to the mold — the allergies.

Well my EBV didn’t go away after 3 months like it does for most people. Fatigue, joint pain, muscle aches, brain fog, . . . AJ and I were barely functional for months. . . then years. AJ missed 3 months of school but had to go back sick so she wouldn’t flunk out. I stayed in bed most days. I kept thinking, was this only EBV? Was it something else?

That’s when I first wondered if something was seriously wrong with our house. Five years ago, we had a mold tester come out, a tester recommended by a friend who worked at a reputable environment agency. He visually inspected the home, took some tests, charged us a fortune, and assured us that we had no mold.

HE WAS WRONG. But it took us 4 more years to find that out.

As for me, I usually took 3-hour naps. I had to save trips up or down the stairs because once a day as about all I could manage. I couldn’t drive most days because I was dizzy with fatigue. My brain fog was so awful that for the first time in my life, I had trouble reading and comprehending books. My hair fell out in clumps. I didn’t sleep well. I gained about 50 pounds. (Even though I was eating Paleo and Autoimmune Protocol.)

JJ’s stomach aches were bad. AJ’s body hurt, her headaches got worse, and she felt dizzy all the time. Over the next 5 years, I took both girls to 3 different pediatricians, many specialists at Children’s Hospital, and many alternative medicine practitioners.

As for me, I continued to persist. I wanted answers for me and for them.

I went to a naturopath who gave me tinctures, foot baths, and sauna treatments. I went to Reiki. I drove an hour to Boulder twice a month to see an acupuncturist who gave me (disgusting) Chinese herbal teas. I went to a second naturopath. I spent month after month searching for answers as well as thousands of dollars on supplements and treatments that did not work. Was I crazy? What was going on in my body? 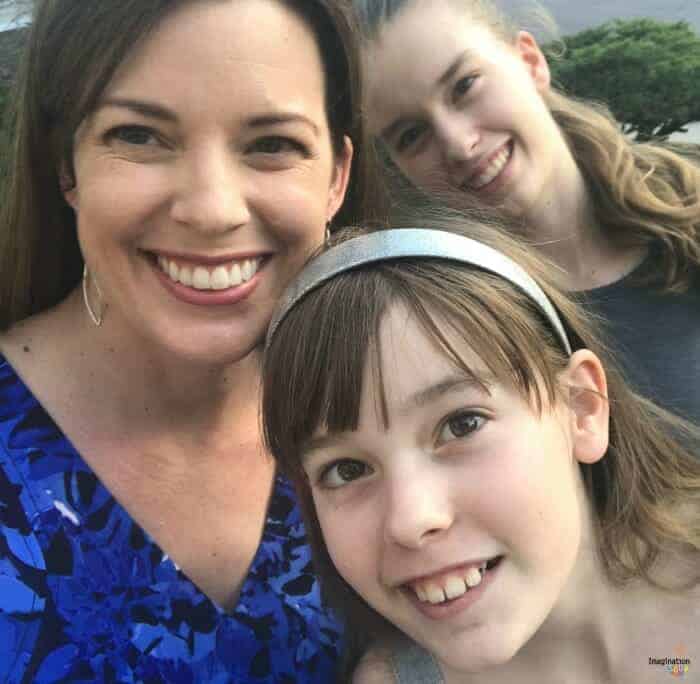 Occasionally there were days and even weeks where I felt better. I’d think– it’s working! I’m cured! But I wasn’t better long term. Nor were my girls.

JJ’s digestive issues became more severe… c-diff three times in the past year, parasites twice, giardia twice, leaky gut, H pylori, and SIBO. We even met with the head of the GI department at Children’s Hospital. He didn’t know what to tell us and said we could try anti-depressants and neurofeedback for her now constant level 7 of pain. (She clutched a pillow to her stomach all the time; often, she’d lie on the floor crying. Talk about feeling hopeless as a mama!) And we did take her to neurofeedback and EMDR. But it didn’t work. Because ultimately it was a medical issue. We needed a functional solution — we needed the root cause.

Then we found a functional medicine doctor who saw all three of us. It took him 9 months to put the pieces together. We all had mold toxicity.

Finally, we’d found the underlying cause of all our symptoms. YES!! Progress!! (That was spring 2017.)

Review of Our Symptoms:

But our mold story was not over.

The mold testing is an air test. (Which has pros and cons but that’s a whole different issue.) The inspector comes to your house and visually inspects where you might have mold. Then, they test where they suspect there could be mold. I got TWO different tester’s opinions and they both said there was a little bit in a large basement room (on a carpet tack strip) plus some random spores in my youngest daughter’s room.

We remediated both rooms.

But do you know what? We did not get better even though we were on the doctor’s mold protocol. Why? Because we were still living in a toxic environment. We still had mold in our house.

Two months passed after our first remediation before we realized it though. It happened when I flooded the kitchen sink — although I truly believe that God made our kitchen sink flood so we could get answers. Because that’s when we noticed that on the ceiling underneath (in a closet that we’d never used in the basement,) there had been previous water damage.

The mold tester returned. Yes, we had mold in the kitchen under the sink and the closet below.

And retested the air. But, it was still positive for toxic mold spores.

It was probable, the remediators said, that the mold had gone up into the ceiling joists and tiles. Mold spreads fast. 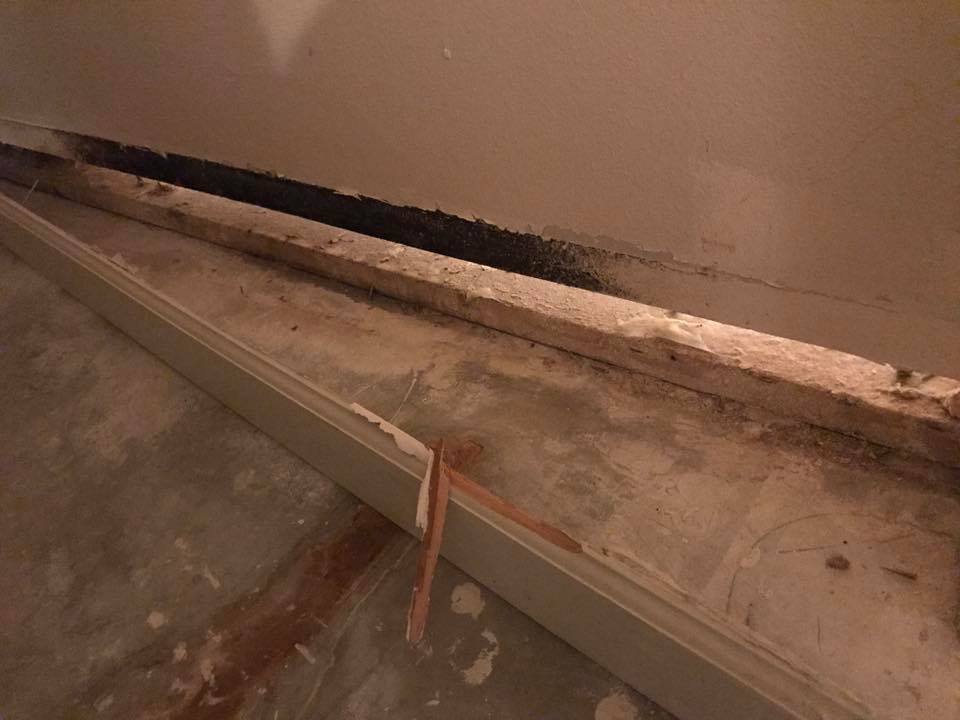 By this time, I was totally fed up with these so-called “expert” opinions. I asked the air tester (a different person than the remediator) to test every single room and closet. And oh, my, did we discover the motherlode of mold. Everywhere (we think) that the previous owner had redone the plumbing, he’d done it wrong, causing water leaks which created mold. (Laundry, sinks, a shower, and a toilet.) Including the deadly black mold, Stachybotrys.

Mold was on the sheetrock, ceiling tiles, and floor joists so our basement needed to become unfinished. We remediated for the third time. (The photo above shows only a tiny spot — there were entire sheetrock walls covered but I don’t have those photos.)

My youngest daughter and I were the sickest so we moved out — we stayed with friends and at hotels. (In retrospect, I think those places all had mold, too. I saw visible mold in 2 of the places. Sigh.)

After a month, the third remediation was done. AND the air tested clean in our house!!! 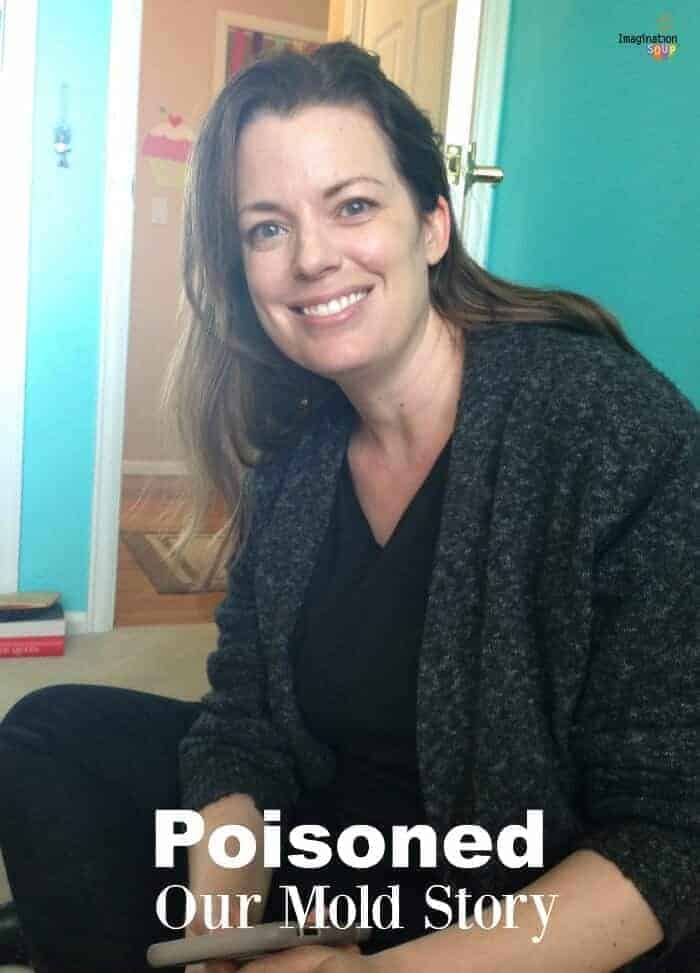 Two months later, my fibromyalgia pain was gone completely!! Unfortunately, AJ got worse — I think she was detoxing too fast (herxing) after a mold-related MARCoNS treatment. We almost withdrew her from school. Fortunately, she got well enough to finish the semester which was a huge relief. Since then, she’s been slowly making progress in the last few months. JJ’s been making slow progress as well.

Now it’s March 2018 and although we are still showing mold in our urine tests, things are improving. I am sort of better. The kids continue to improve. JJ currently has giardia and H pylori again due to having NO IgA from the toxicity. It will take them longer to get the toxins out of their bodies since they’re not eating like me (AIP), not able to do the medicines every day (because of constipation), nor doing the infrared sauna as much as me.

There have been blessings and life lessons along the way.

My faith grew deeper. It’s much more real to me now.

I’ve experienced huge emotional healing from trauma. Before I knew what was wrong, a few years ago I started seeing a somatic experiencing therapist because I wondered if I was manifesting my sickness. She’s been such a huge help to me in my emotional healing journey. For example, watching my babies be so very sick tore at my heart. But it gave me an opportunity to not be enmeshed with them, let them have their life experience, and be present with love and support. It’s not easy. In fact, it’s been really, really been hard — but I already see how it’s so worth it long term. That’s just one example. There are many more. (I love therapy.)

Being sick also makes you realize who those true friends are. I saw that hadn’t picked friends wisely. That ties into my past trauma led to issues of trust which I am still working out. Suffice to say, it’s always a blessing to see the truth, as hard as it might be.

Because my foggy brain couldn’t think deeply, being sick helped me develop a stress-free, mindful way of being in the present moment. Which is super cool. Now that my brain is back online, I have that new habit of being mindful. Go, me! 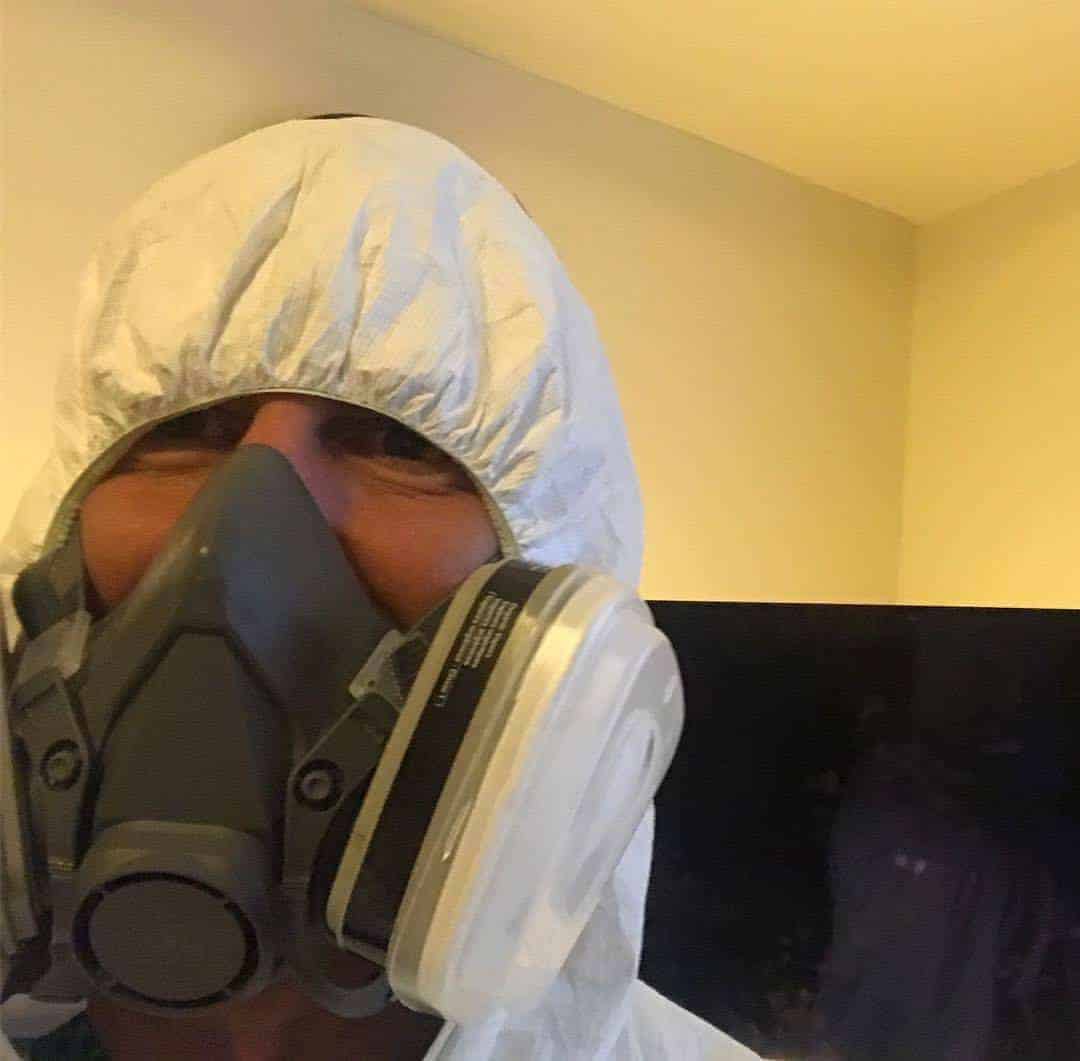 Oh, and my husband, Jeff, is the best, most wonderful person in the world. He’s been my rock and so supportive. I love this man! Here he is in our basement working in his office — and throwing everything away that can’t be cleaned with Concrobium.

I hope my story will help you or someone you know. Maybe you know someone who has chronic fatigue syndrome or body pain or any of the other symptoms possible– now you can suggest that they consider mold as the underlying cause. If you have any questions about our journey or if I can help you in any way, please comment or email me. We don’t have to do this alone.

In February 2021, I still wasn’t feeling great and had gained even more weight despite eating Paleo. Sure enough, my mold urine test showed mold still in my body.

We discovered our super expensive Tyent Water Purification system had MOLD INSIDE it!! Not the filters but between the metal plates where there were some organic paper-like substances. Filled with mold!!

This discovery changed everything. Just not drinking the water, I started to feel more energetic.

Now, I’m doing a LOT of trauma therapy that includes Internal Family Systems since there is a big link between trauma and health. I’m doing ozone injections and regular IVs of good detoxing things like Glutathione and NAC.

I’m hopeful and excited that the next decade and beyond will be much better.

Is Toxic Mold Exposure the Cause of Your Symptoms?, Dr. Jill Carnahan, MD

It Takes Time – Mold Stories from Survivors and Information 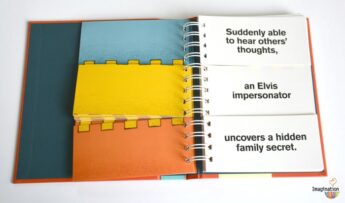 Book with Hundreds of Storytelling & Writing Prompts for Kids