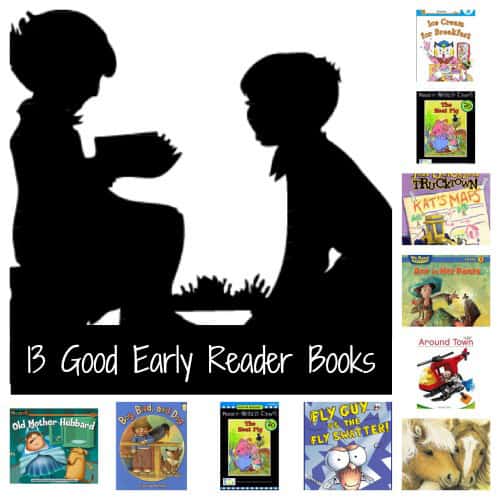 I often struggle to find engaging early readers for JJ so I bet you have the same problem, too. Today, I wanted to share some of the best early learning (reader) books we’ve enjoyed lately, most of which are newly published.

All these books include beautiful illustrations with appropriate text which in my opinion means not too much or too stupid. But, I’ll share sample text with you so you can judge the readability for yourself. Page breaks will be indicated with these double lines –> //. Ready? Let’s go.

I shared with you my favorite early readers from Newmark Learning yesterday. Be sure to read more about their books and enter to win a Parental Involvement Book Kit.

Pal and Sal – Penguin Young Readers – by R.A. Herman
“Pal waits. He nibbles some grass. He swishes his tail. // He tries to be good. But there is nothing to do.”

The Big Fat Cow That Goes KaPow by Andy Griffiths
“Lumpy-Head Fred:
Have you heard about the boy called Lumpy-head Fred? //He sleeps at the top of a 100-decker bed! //But poor old Fred always falls out of bed. //Which is why he has such a lumpy, bumpy head.”
A thick, hilarious book of stories that looks like a chapter-book.

Fly Guy vs. the Flyswatter! by Tedd Arnold
“The tour guide brought
out a tiny fly in a jar.
“Release the fly!”
yelled Fred. //
The Super Swatter
started swatting //

What Puppies Do Best by Laura Numeroff, illustrated by Lynn Munsinger
“Puppies can chase a ball, // learn how to sit, // and give you their paw.”

My Dog, My Cat by Ashlee Fletcher
“My dog barks. // My cat meows. // My dog likes steak. // My cat likes tuna.”
A full-sized picture book from Tanglewood Press.

Ant in Her Pants Treasure Bay We Read Phonics by Paul Orshoski
“Miss Grant got an ant in her pants. // It came up her sock . . . // . . . and gave her a shock.”
Very pleasing illustrations and a funny story.

The Lion and the Mice by Rebecca Emberley and Ed Emberley
“The mouse is stuck, She is lost, // The lion wakes, uh-oh, “I will eat you!” the lion roars. “No,” the mouse begs. “Do not eat me. I am lost.” // The lion lifts the mouse. She sees her house.”
Colorful, artistic interpretation.

Around Town – Lego DK Readers – by Victoria Taylor
“The fire truck rushes to the fire with its siren blaring. // One of the firemen tries very hard to put out the flames. A difficult job.”
Lego fans LOVE this book – it’s my friend’s son’s favorite book ever.

The Neat Pig – Read It Write It Draw It – by Nora Gaydos
“Once upon a time, there was a little pig who liked to be neat. // He liked to sleep in a very clean bed. He liked to eat from a plate. And he liked to put on his neat, white coat.”
This silly book is divided into three sections – first the story, then a fill-in-the-blank retelling of the story, and then a sticker, coloring retelling section.

I’ve added each of these books to my new master book lists by age!
Books for 5- and 6- year olds