I know you love finding new, wonderful picture books to read with children just as much as me. Here you’ll discover funny, silly, thought-provoking, and fun new books to share with your kids.

I continue to wish that the human characters in picture books reflected the diversity that is in our communities. I don’t understand why that’s so hard!? So thank you, Ada Twist, Scientist and One Day in the Eucalyptus, Eucalyptus Tree for having a main characters of color. 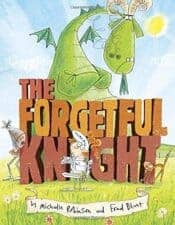 The Forgetful Knight by Michelle Robinson and Fred Blunt
Kids will crack up as they try to guess what the Forgetful Knight tries to remember what he’s doing — oh, yeah, he’s seeking the dragon who swallowed his best friend. When he catches up with that mean dragon, the knight gives the dragon a good telling off for eating so many people’s pets. (That’ll teach him!) (Added to Dragon Books for Kids.) 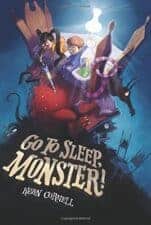 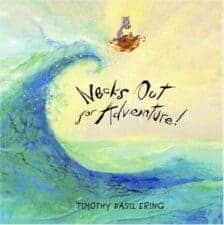 Necks Out for Adventure! by Timothy Basil Ering
Edwin wonders about his life staying hidden inside his shell. His mom tells him, “Necks out for adventure” and before he knows it, he’s forced on an adventure that will show him the world and save his kidnapped family. I love the illustrations and the courage of the main character. 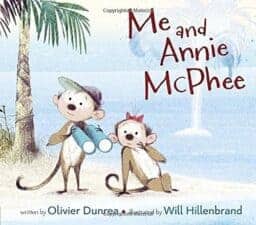 Me and Annie McPhee by Olivier Dunrea, illustrated by Will Hillenbrand
This is a fun add-on (cumulative) story about what’s on the small island — is not just the narrator and Annie McPhee on the island. NO, there are dogs, frogs, pigs in wigs. And it all adds up to one crowded place. Silly & fun. 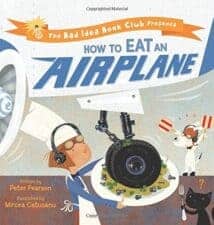 The Bad Ideas Book Club How to Eat an Airplane by Peter Pearson, illustrated by Mircea Catusanu
You’ll be as puzzled as me as you follow along at this strange dinner party where the kids eat the parts of the airplane. It’s a very strange and goofy way to learn the parts of a plane, that’s for sure. 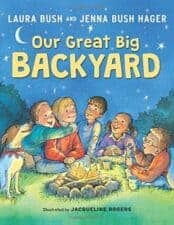 Our Great Big Backyard by Laura Bush and Jenna Bush Hager
Jane’s family is on a road trip across the United States — and she’s not happy about it. At first. Then, she slowly warms up to the amazing vistas and experiences the national parks and nature have to offer. Realistic and charming, Jane is such a relatable main character. This excellent picture book will get any child excited for their own grand tour of the U.S. from the Everglades to Old Faithful. 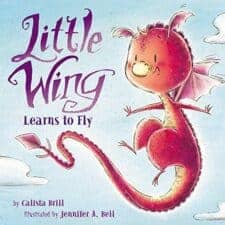 Little Wing Learns to Fly by Calista Brill, illustrated by Jennifer A. Bell
Little Wing knows that a dragon never gives up. So, he keeps trying and trying to fly. When he finally succeeds, he flies away from his mama before hearing the rules for flying. When he lands in a scary forest, his mama finds him to tell him about the rules again. And dragons always follow the rules. Charming illustrations and life lesson. (Added to Dragon Books for Kids.) 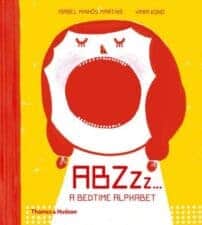 ABZZZ . . . a Bedtime Alphabet by Isabel Minhos Martins, illustrated by Yara Kono
Little ones will enjoy this playful, interactive alphabet book where D is for Day and O is for Off-Switch. I love the questions that engage readers with the text such as “Quick, find your off-switch! Try pressing your nose. Did that work?” (Added to Alphabet Books for Kids) 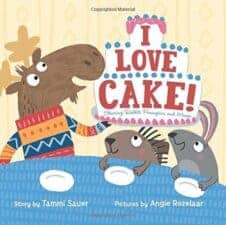 I Love Cake Starring Rabbit, Porcupine, and Moose by Tammi Sauer, illustrated by Angie Rozelaar
Three best friends are excited to celebrate Rabbit’s birthday. They jump on the tramp, play pin the tail on the chipmunk, and are about to eat cake but where is the cake? Moose!? Did moose eat all the cake on accident in one big bite? The friends are upset but Moose fixes things — with another cake and this time that he shares. 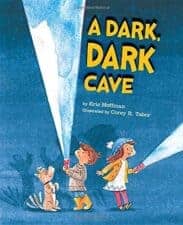 A Dark, Dark Cave by Eric Hoffman, illustrated by Corey R. Tabor
What a wonderful celebration of pretend play and imagination! A brother and sister bravely explore the dark, dark cave where they see bats flying, and crawling things on the walls, until their dad lifts the blanket of their fort and tells them they are being too loud and will wake the baby. What will they do next? How about horses? 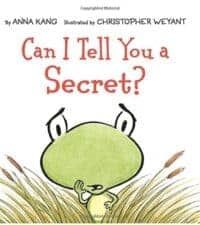 Can I Tell You a Secret? by Anna Kang, illustrated by Chirstopher Weyant
Froggy talks to us the reader and shares his big secret — he can’t swim! Then we give him advice — tell your parents. Which Froggy does and guess what? They already knew and are ready to help him learn to swim. 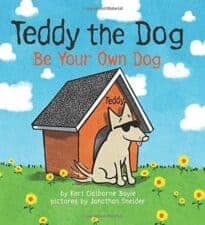 Teddy the Dog Be Your Own Dog by Keri Claiborne Boyle, illustrated by Jonathan Sneider
Teddy is a confident, easy-going dog. He’s very surprised when he gets a special delivery and it’s  . . . A CAT! First, he tries to teach the little Fishbreath creature how to be a dog like him. Then, he realizes that it’s best to just be true to yourself. Clever and charming. 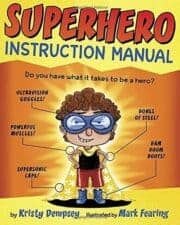 Superhero Instruction Manual by Kristy Dempsey, illustrated by Mark Fearing
This book is just what you need (and me, too) because it’s not easy becoming a superhero without some tips. Step 1 is my favorite — combine your favorite color and favorite animal to get your superhero name — the Pink Python, for example. From hideouts to sidekicks to saving the world, this book has it all for budding superheroes. (Added to Superhero Books for Kids.) 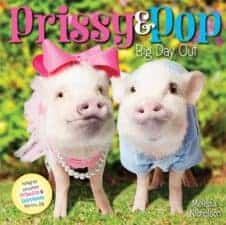 Prissy & Pop Big Day Out by Melissa Nicholson
The author / photographer writes about an adventure her micro-pigs take with colorful photos showcasing lots of adorableness. 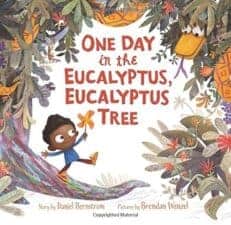 One Day in the Eucalyptus, Eucalyptus Tree by Daniel Bernstrom, illustrated by Brendan Wenzel
When a snake eats him, the boy (from inside the snake’s tummy) encourages the snake to eat more — which he does. From grapes to bears, to a cat, to a beehive, . . . the list goes on (think Old Lady Swallowing a Fly) until just a small fly makes the snake burp everything all out. Good thinking on the boy’s part, eh!? 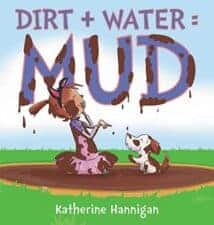 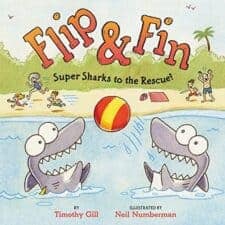 Flip & Fin Super Sharks to the Rescue! by Timothy Gill illustrated by Neil Numberman
What a funny and fun story about sharks who just want to help — but unknowingly scare the humans on the beach. It doesn’t occur to the sharks that it’s THEM that the humans are afraid of, which make it quite funny to the reader. 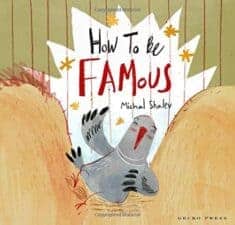 How to Be Famous by Michael Shalev
It’s hard to be a top-model pigeon we learn. People come from all over to take photos of said pigeon, even when he’s resting. Or are they taking photos of something else? The reader is in on the joke… that what the pigeon doesn’t know that he is not the famous one. In fact, the zoo animals are. Irony. 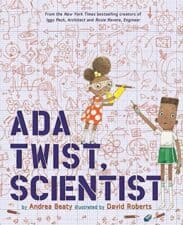 Ada Twist, Scientist by Andrea Beaty, illustrated by David Roberts
Curious Ada loves questions and thinking just as much as she loves science experiments. Even when in time out, Ada is thinking and wondering . . . all over the wall. I love this spunky science-loving character of color and know you will, too. 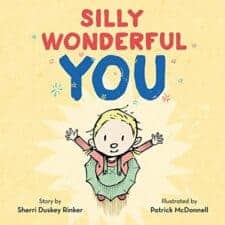 Silly Wonderful You by Sherri Duskey Rinker, illustrated by Patrick McDonnell
What a heart-warming book. A mother tells her daughter how she couldn’t have imagined all the giggly, crashy, grumpy – ness of childhood, the glitter and glue creations, the surprises, the fun, the love, and the dreams come true. 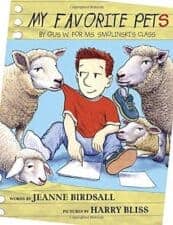 My Favorite Pets by Gus W. for Ms. Smolinski’s Class by Jeanne Birdsall, illustrated by Harry Bliss
Sheep are Gus’ favorite pets. Which is why he writes this hilarious report for his class. . . You’ll laugh as he explains the basics with a bit of elaboration. “A boy sheep is a ram. He has horns. They do not come off.” This text is paired with an illustration of Gus trying to pull off the horns with a rope lasso. Super funny and even a little informational . . .

The Truth About My Unbelievable Summer by Darrinda Cali, illustrated by Benjamin Chaud
A treasure map message in the bottle leads to a pirate ship, a giant squid, a visit to space, and more including a surprise ending! Silly & fun. 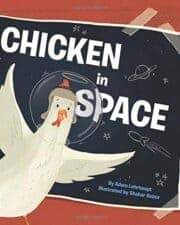 Chicken in Space by Adam Lehrhaupt, illustrated by Shahar Kober
I loved this story about Zoey, a big-dreaming chicken, who, with her pig friend, Sam, embarks on a dangerous space adventure. Where there is no pie. But there might be moon pie afterward. And lots of fun. 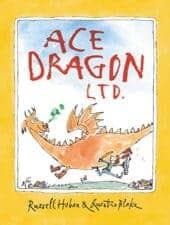 Ace Dragon Ltd. by Russel Hoban, illustrated by Quentin Blake
One ordinary day, John meets a dragon — apparently, a limited dragon who can do many things but not everything. They have a wonderful day — fighting and flying and turning straw into gold. When it’s dinnertime, John tells Ace that he’s not so limited, and we know this is the start of a wonderful friendship. 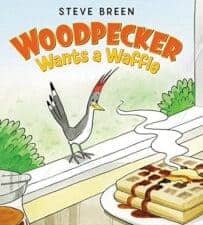 Woodpecker Wants a Waffle by Steve Breen
Woodpecker doesn’t care how much he’s thwarted by the cafe or even what the other forest animals think — he WILL eat a waffle from the cafe, one way or the other. He tells the skeptical forest animals to watch when he enacts his big waffle-stealing plan. Hilarious ending!

They All Saw a Cat by Brendan Wenzel
Use this beautiful book to talk about perspective. The cat walks through the world. And is seen by different creatures, each seeing the cat differently. It’s SUCH a cool book on point of view that it’s a must-read, must-own book, especially for classrooms. 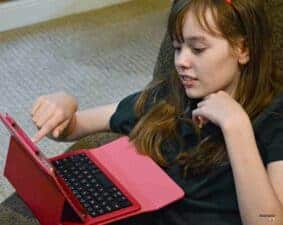 Take a Technology Inventory: What’s Working and What We’re Changing

Favorite Books for 4- and 5-Year-Olds

Keeping My Son Connected to Our Ancestors