Believe it or not, games like Minecraft motivate kids to read. To learn to play the game, they read Minecraft forums and Minecraft books. And, there are lots of good fiction chapter and middle books about Minecraft adventures that kids can read as well.

In a WIRED article, Clive Thompson explains, “Minecraft is surrounded by a culture of literacy. The game comes with minimal instructions or tutorials, so new players immediately set about hunting for info on how it works. That means . . . poring over how-to texts at Minecraft wikis and “walk-through” sites, written by gamers for gamers. Or digging into printed manuals like The Ultimate Player’s Guide to Minecraft or the official Minecraft Redstone Handbook.”

After a recent trip to the bookstore for a few Minecraft books for my kids, I thought I’d tell you some of the top Minecraft books you could buy for your own kids. (Maybe for Christmas or anytime gifts?) Because reading is reading, right?!

Some of these books are guides (nonfiction), others are novels (fiction), and a few are activity books. 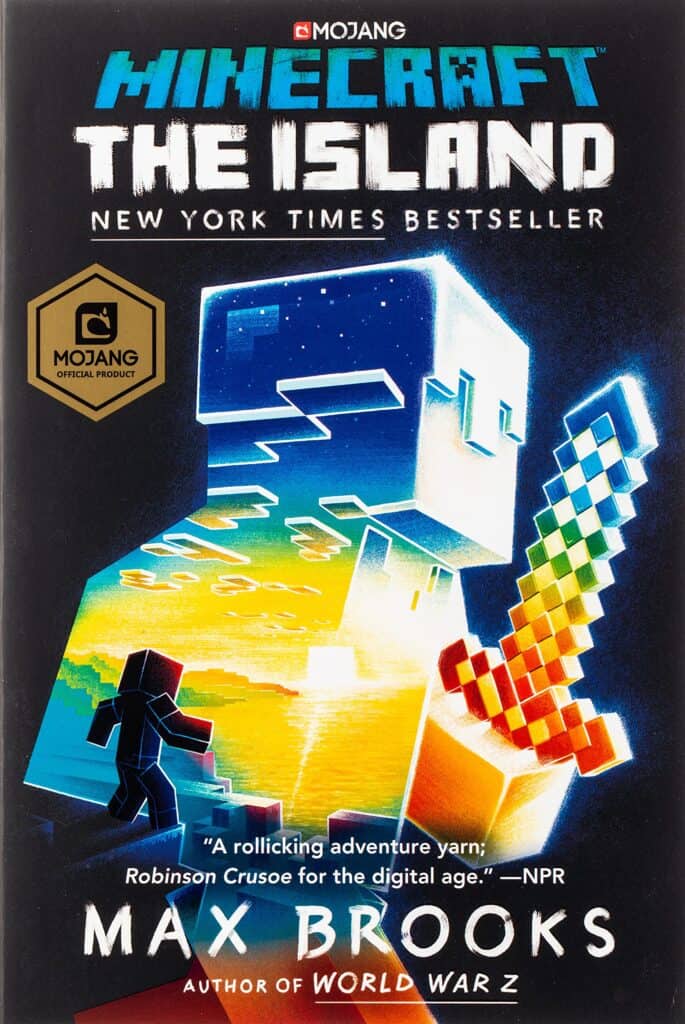 Minecraft: The Island (An Official Minecraft Novel Book 1) by Max Brooks
Reader recommended! In this first adventure, Z is stranded on an island in Minecraft and must unravel its secrets in order to survive.
***GET ALL 9 OF THE MINECRAFT BOOKS IN THE SERIES HERE.

Diary of a Minecraft Zombie Book 1: A Scare of a Dare by Herobrine Books (SERIES) (ages 6 – 10)
Short sentences with witty observations on life from the perspective of a Minecraft zombie that will crack you up. I was surprised to say the least that this was such an entertaining, funny read. Nothing scary. Just fun. Especially for Minecraft enthusiasts. (These are FREE for Kindle Unlimited subscribers!) 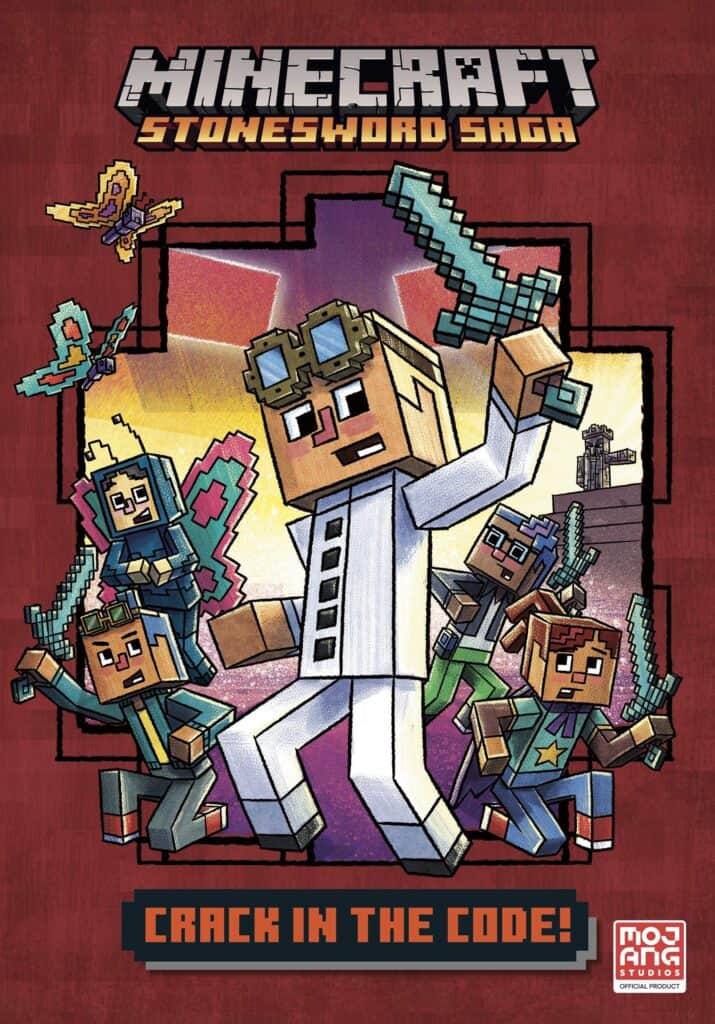 Crack in the Code (Minecraft Stonesword Saga #1) by Nick Eliopulos
Illustrated with fun fonts throughout, this adventure story takes players into the game with a new player named Nick. Unfortunately, Nick likes to change the code, which might kill them all. 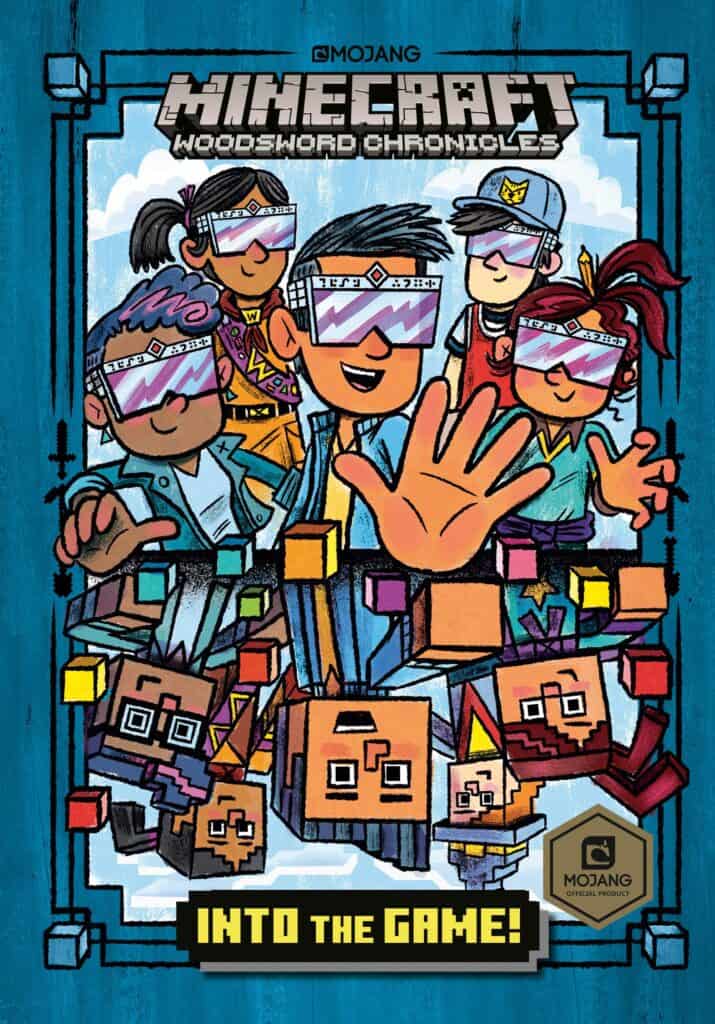 Into the Game (Minecraft Woodsword Chronicles) by Nick Eliopulos
First in one of the BEST Minecraft book series, this adventure quest follows five players who are transported inside the game– and they’ll have to use all their survival and problem-solving skills to stay alive. BOXED SET of Books 1 – 4 HERE.

Diary of an 8-Bit Warrior by Cube Kid, illustrated by Saboten
Runt is a 12-year-old with real problems. He doesn’t want to be a typical villager with a boring life. He wants to be a warrior like Steve. So he’s excited when his school finally agrees that the villagers might need warriors to fight back against the nightly attacks. When Steve loses everything and moves in with Runt’s family, Runt hopes that Steve will help with warrior training. Runt’s a relatable, mostly serious character who just wants a different life — like most kids his age and is competing for a dream opportunity. A fantastic Minecraft book with illustrations that will be a good addiiton to any bookshelf! 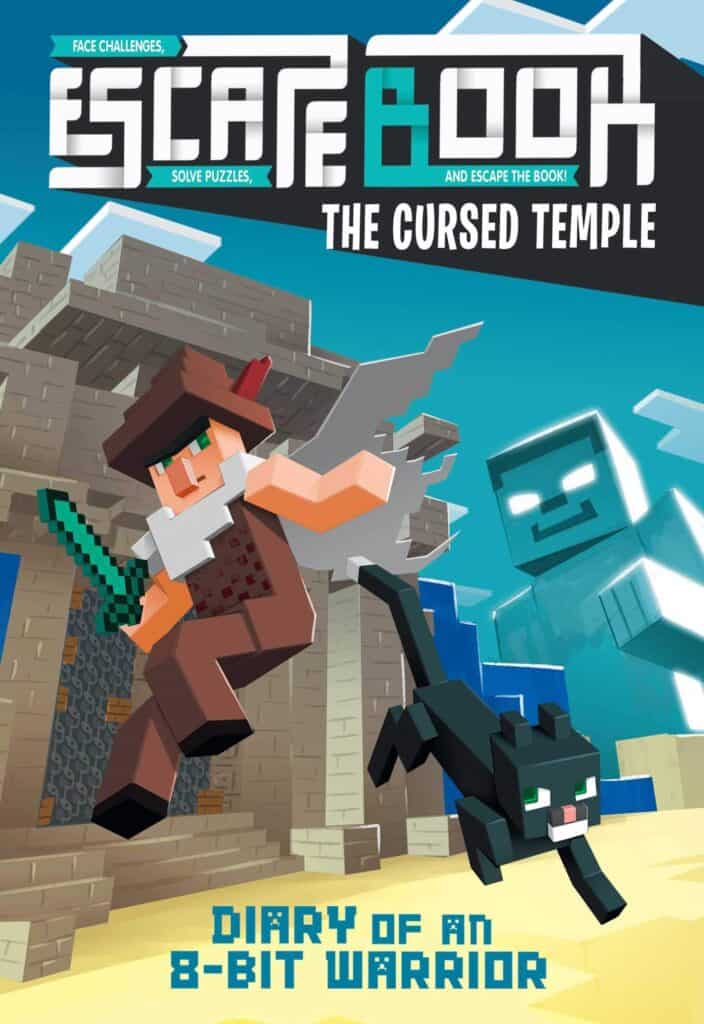 Escape Book The Cursed Temple (Diary of an 8-Bit Warrior) by Alain T. Puyssegur
In this choose-your-own-adventure book, you are Runt, a villager noob turned warrior. The Villagetown is in danger from the cursed king and only you can help. You’ll have to make decisions, solve riddles, problems, and puzzles in order to not die and save everyone including your best friends Breeze and Eeebs. Fantastic illustrations, a cool design, and exciting adventures make this a killer first book in a new series. 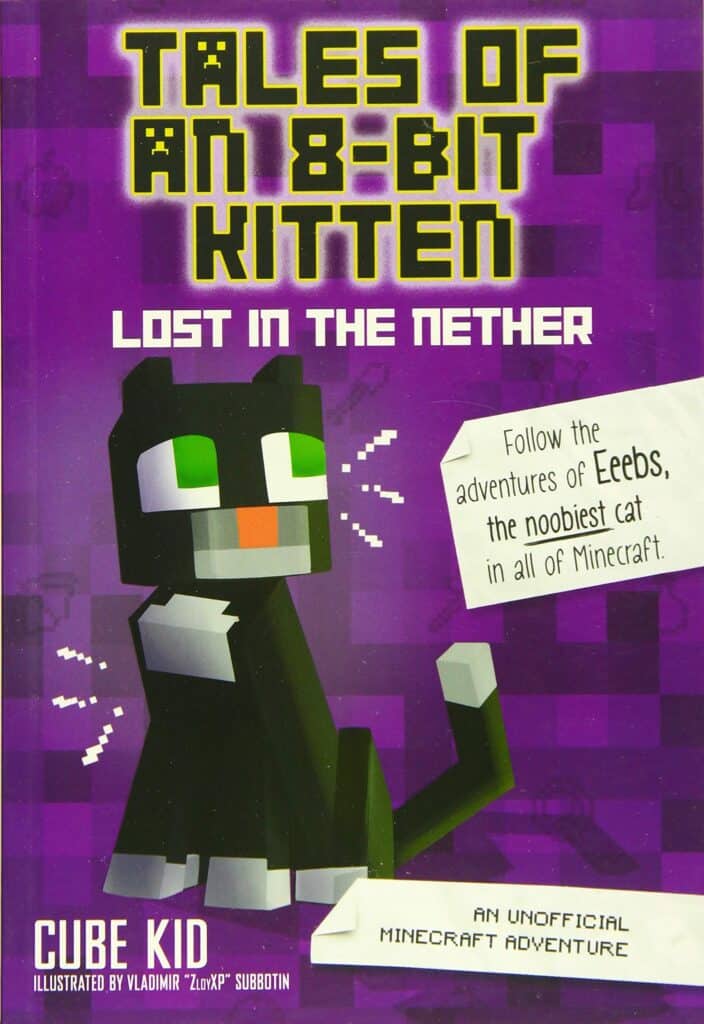 Lost in the Nether: Tales of an 8-Bit Kitten by Cube Kid
Eeebs is a Minecraft kitten who gets lost in the Nether where he develops supernatural powers including the ability to talk. Great character development, visually appealing, and lots of action, this exciting adventure pits Eeeebs against the Endernova’s army and the Enderman… 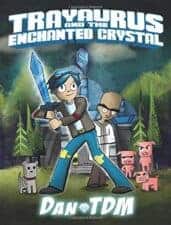 Trayaurus and the Enchanted Crystal by Dan TDM, illustrated by Doreen Mulryan
This is a graphic novel from DanTDM, a Minecraft YouTuber. My daughter didn’t love it but it gets good reviews so it’s worth considering. The story is about DanTDM and Trayaurus finding powerful crystals that can be used for good or evil so it’s a big problem that Denton, their archenemy, has also found a shard! 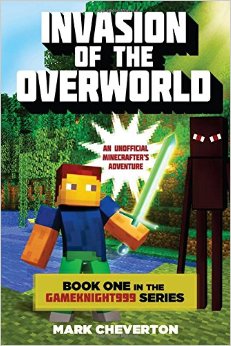 The Invasion of the Overworld by Mark Cheverton
Gameknight999 loved ruining the game for other players (called griefing) until his father’s invention teleports him into the game. Now he’s worried what will happen if he’s killed in Minecraft – will he respawn? And he learns that the creatures in the game are really alive and he’ll have to start working with others to survive. My daughter thinks this is the best Minecraft chapter book series for kids. What do you think? 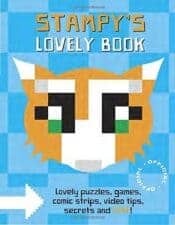 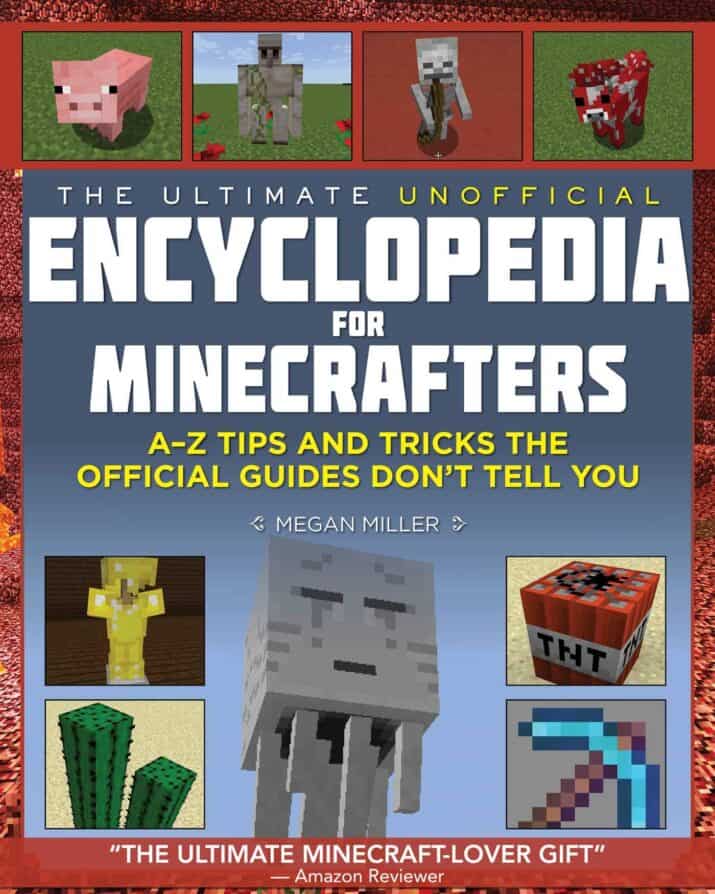 The Ultimate Unofficial Encyclopedia for Minecrafters by Megan Miller
This unofficial guide is a big book of players’ hacks organized in an easy-to-reference encyclopedia format. This book will show readers the ins and outs of the game, how to survive and thrive, and various mods that can improve play. The book is illustrated in full color throughout, making it easy for new and experienced Minecrafters to build, fight, protect, and survive in their creative worlds. 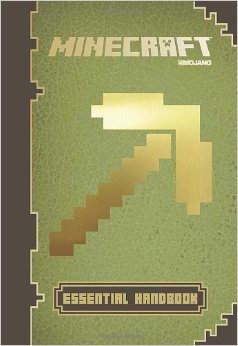 The Minecraft Essential Handbook: An Official Mojang Book by Scholastic
Learn how to find resources, make a shelter, craft tools, protect yourself from monsters and more basics in this guide to surviving Minecraft. My daughter loves this series of books! 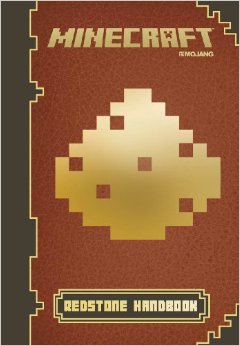 Minecraft Redstone Handbook by Scholastic
Redstone is a complex area of Minecraft where you need to know about mining, smelting, using repeaters, circuit components and circuit designs. Read tips from the game creator Notch and get ideas for amazing Redstone creations. 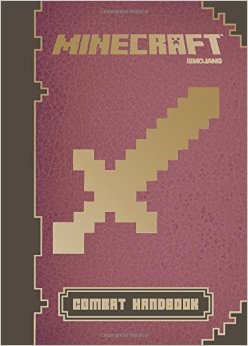 Minecraft Combat by Scholastic
The official Minecraft book of combat handbook will show you how to defend yourself from monsters and other players as well as set mob traps, battle out of the Nether and the End, and craft weapons. 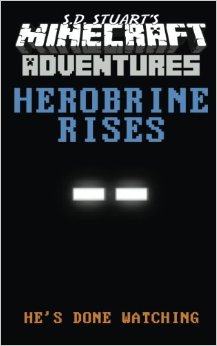 Minecraft Adventures: Herobrine Rises by S.D. Stuart and Steve DeWinter (fiction)
Twins Josh and Andre play Minecraft in their dad’s virtual reality lab. They hack into a password-protected server created by Notch and can’t believe what they find. First in the series. The second book is The Portal.  Well-rated and GREAT for reluctant readers who love Minecraft! 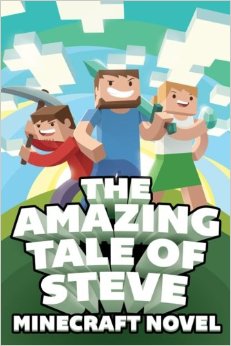 The Amazing Tale of Steve by Minecraft Novel (fiction)
In this book, a young, inexperienced, silly underdog named Steve becomes the deciding factor in a full-scale Minecraft war.

STEM Gifts for Kids of All Ages 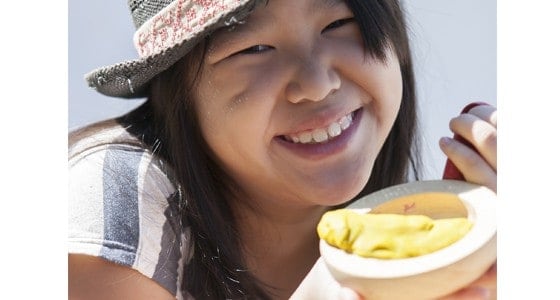