If your children like books with magic, reading about witches will transport them into wonderful, magical worlds. Discover picture books and chapter books about witches, for Halloween or anytime. 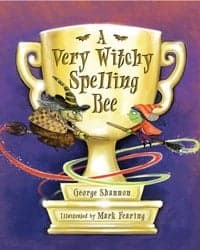 A Very Witchy Spelling Bee by George Shannon illustrated by Mark Fearing
Young witch, Cordelia, loves spelling and spells. So much that she does them together. She adds an O to C-A-T and makes C-O-A-T for example — her yard is filled with the most unexpected things. Now she’s ready to enter the Witches Spelling Bee. when they’re down to just two witches, her nasty opponent, Beulah, tries to win by changing Cordelia’s EARS into PEARS! And her HAIR into CHAIR. Lucky for us, Cordelia is not just smart, she’s also very kind. What she spells makes the perfect ENDING. 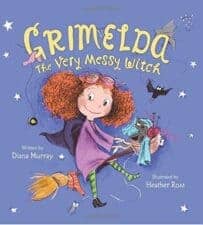 Grimelda The Very Messy Witch by Diana Murray, illustrated by Heather Ross
Grimelda needs pickle root but must clean her entire house before she can find it. Silly and fun — no scary stuff here. 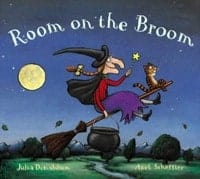 Room on the Broom by Julia Donaldson, illustrated by Axel Scheffler
A classic Halloween story of friendship! While flying on her broom, the wind blows away the witch’s hat, bow, and wand! Fortunately, three animals find her things and ask for a ride on her broom. Will there be room? What will happen when a hungry dragon shows up? 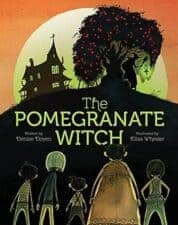 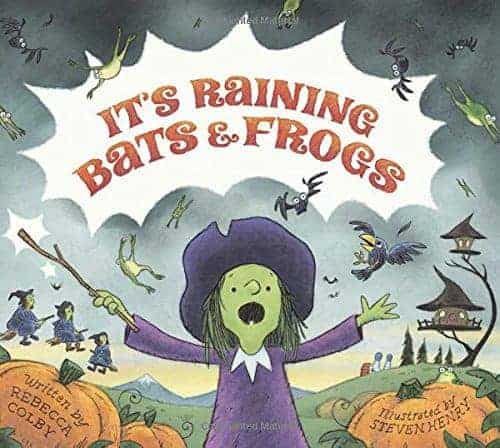 It’s Raining Bats and Frogs by Rebecca Colby
Oh, dear. It’s raining on the Witch Parade. Delia wants to help! She changes the rain to cats and dogs. But that’s too crazy so Delia tries again with hats and clogs instead. Oh, my. Then the witches fight over the shoes so Delia tries bats and frogs instead. Disaster after silly disaster make the actual rain look better and better. After all, a little rain never hurt anyone. Adorable. 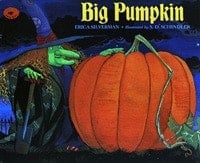 Big Pumpkin by Erica Silverman, illustrated by S.D. Schindler
How can the witch get the biggest, heaviest pumpkin off the vine? You’ll be surprised who can help! (Hint: It’s not the vampire or the ghost.) 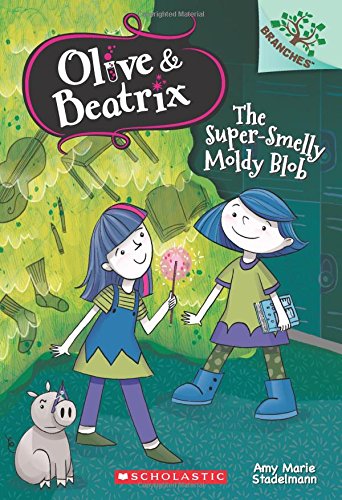 Olive & Beatrix The Super Smelly Moldy Blob by Amy Marie Stadelmann
It’s science fair time and these twins, one who is a witch and one who is a super smart science nerd, are in it to win it. Except disaster happens when the duo fight, making their projects combine into a huge green blog that absorbs everything. It will take both their skills to fix this slimy problem. An enjoyable book series for 5- and 6- year old readers. (A few sentences per page, lots of picture support.) 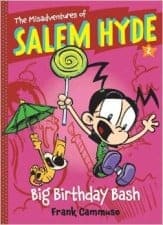 The Misadventures of Salem Hyde: Big Birthday Bash by Frank Cammuso
In this graphic novel Salem adventure, Salem predictably makes disasters happen everywhere she goes. She has some trouble with making things (herself) gigantic and other things (the birthday party kids) small. Hilarious, wacky, and totally enjoyable. 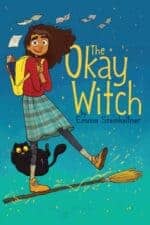 The Okay Witch by Emma Steinkellner
The other kids bully Moth when she dresses up as a witch for Halloween prompting a reaction that can only be MAGIC! Her mom reluctantly reveals to Moth that Moth is a witch and will get powers around age 13. Since her mom won’t teach Moth, Moth is helped by a talking cat and her mom’s magical diary. Growing up is never easy — but it’s a lot trickier when you get magic that you can’t control. Readers will enjoy this magical coming-of-age gem. 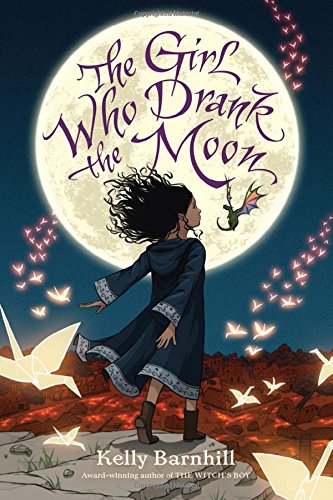 The Girl Who Drank the Moon by Kelly Barnhill
Wonderfully crafted and imagined, this is a fairy tale of sorts about a good witch who rescues a town’s abandoned (the town thinks sacrificed) babies and gives them to another town to love. Except for one baby whom the witch adopts for her own; a special baby named Luna who is accidentally infused with moon magic. It’s also the story of the baby’s magical, bereaved mother, a wicked witch who feeds off sorrow, a woodcarver who wants justice, and of course, Luna. 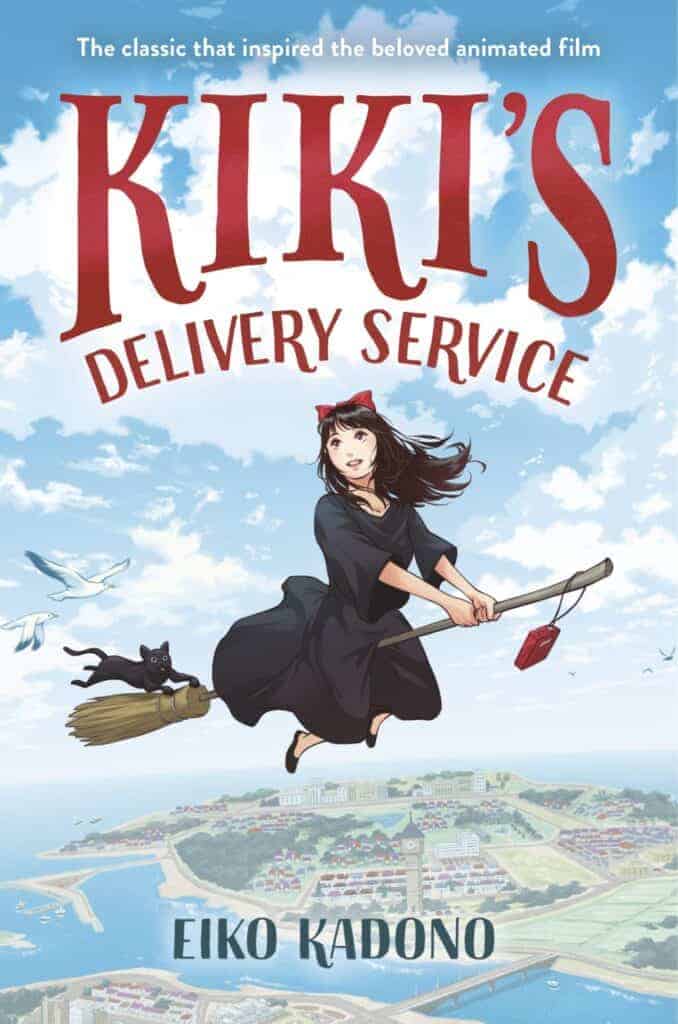 Kiki’s Delivery Service by Eiko Kadono, illustrated by Emily Balistrieri
As a huge fan of the movie, I was so impressed at how true to the original book, the film stayed. This sweet story is about a 13-year-old half-witch named Kiki who leaves home for her year-long apprenticeship in a town. She flies with her cat and they find a seaside town that needs a witch. There, Kiki settles above a bakery and uses her wits and magic to endear herself to the town as a helpful delivery girl. Lovely, lovely, lovely! 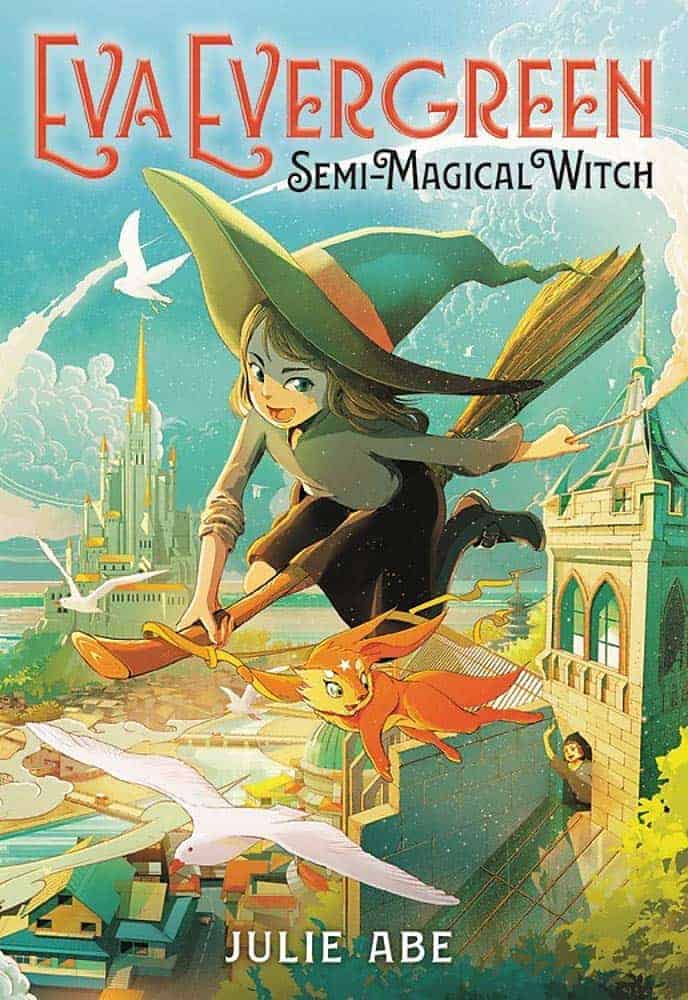 Eva Evergreen, Semi-Magical Witch by Julie Abe
You will love this captivating main character about an apprentice witch who struggles with insecurity, bullying, and self-doubt. She doesn’t have a lot of magic but does have strength, even if she needs a few reminders about it. She will be able to help her city even with semi-magical skills. A sweet, magical story. 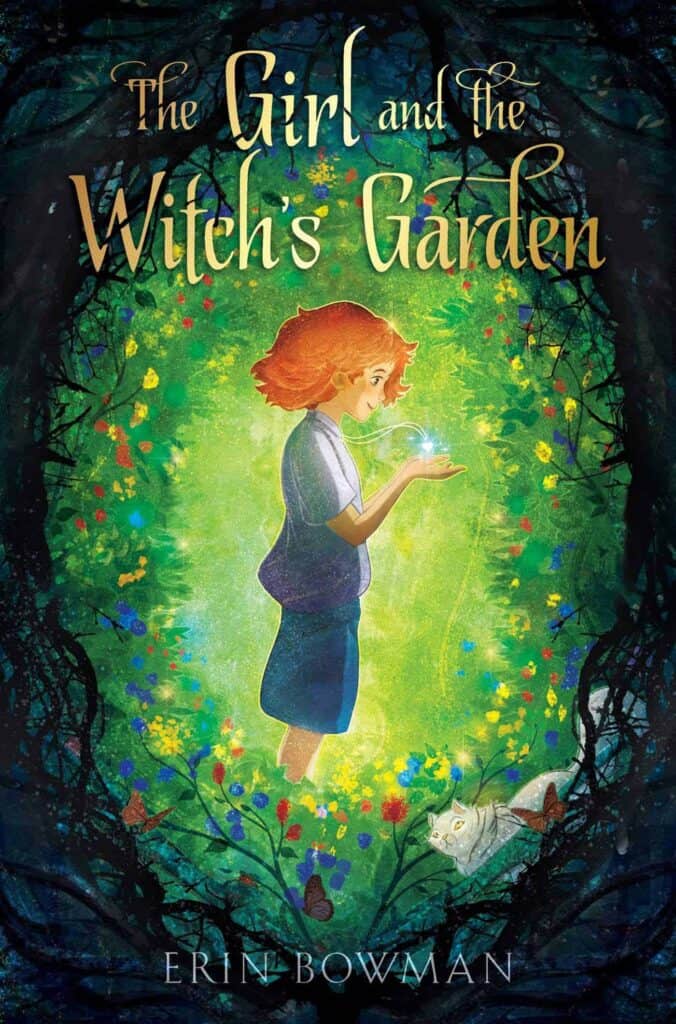 The Girl and the Witch’s Garden by Erin Bowman
Piper’s father’s cancer is worse so she’s sent to stay with the mother who abandoned her as a baby. At her mom and grandmother’s house, Piper learns that she’s from a magical lineage and the foster kids living there all have affinities. Piper’s cruel mother wants the kids to use their magic to find an elixir of immortality. Piper secretly discovers her own magic, works with the other children, and discovers the true villain in the house.

Nightmares! by Jason Segel and Kirsten Miller, illustrated by Karl Kwasny
Not only is this story compelling and interesting, but so are the symbolism and life lessons. Charlie’s dad has remarried and moved Charlie and his younger brother into the stepmother’s frightening purple mansion. There Charlie begins to have the most horrible nightmares — nightmares that blur between reality and dream. And when the witches steal Charlie’s brother into the nightmare world, he must enter that world to rescue his brother. Charlie and his friends must learn to face their fears in order for the nightmare world not to have access to the real world. 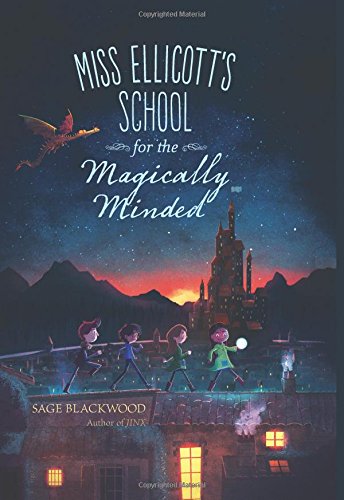 Miss Ellicott’s School for the Magically Minded by Sage Blackwood
Terrifically imagined, you’ll love the young heroine who stands up to adults, helps others, and saves the entire city. When the witches all vanish, including Miss Ellicott, Chantel determines to figure out what’s going on. She stands up to the town’s male rulers including the power-hungry king. Then her courage releases her bonds with a dragon who will help her save the townspeople from the outsiders and the rulers. 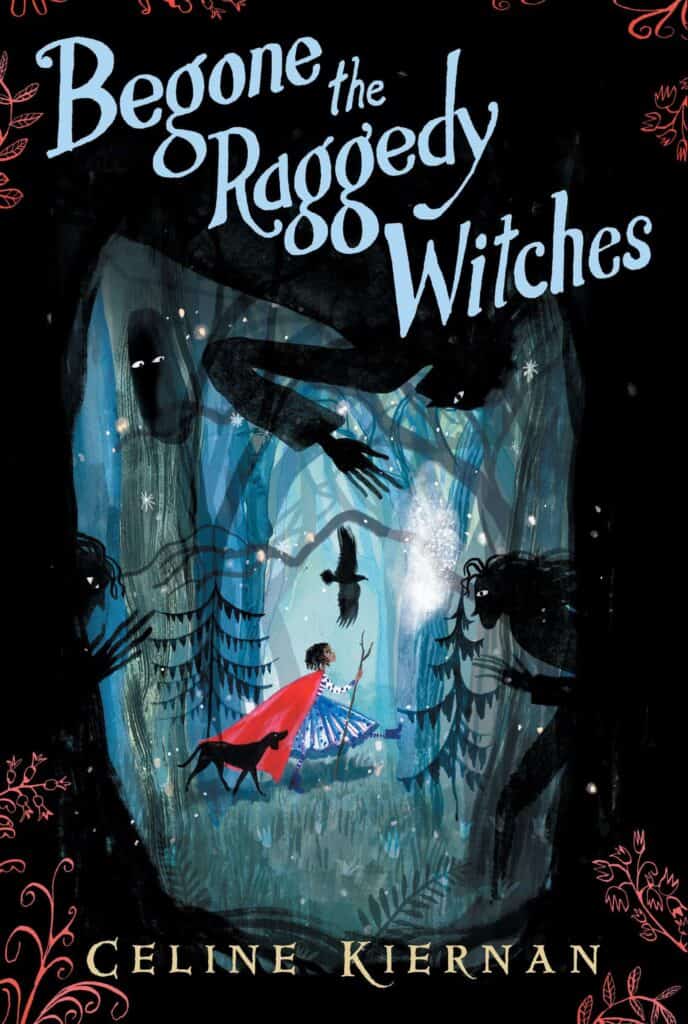 Begone The Raggedy Witches by Celine Kiernan
Raggedy witches kidnap her father so Mup, her little brother, her mom, and her ghostly aunt cross over into the magical land where Mup’s evil grandmother rules with fear and tyranny. Loyal to a new friend, Crow, who has never know loyalty, Mup fights for her family –to get her dad back and protect her brother. In this magical story, I liked the strong themes of fairness, equality, and family as well as the excellent adventure. 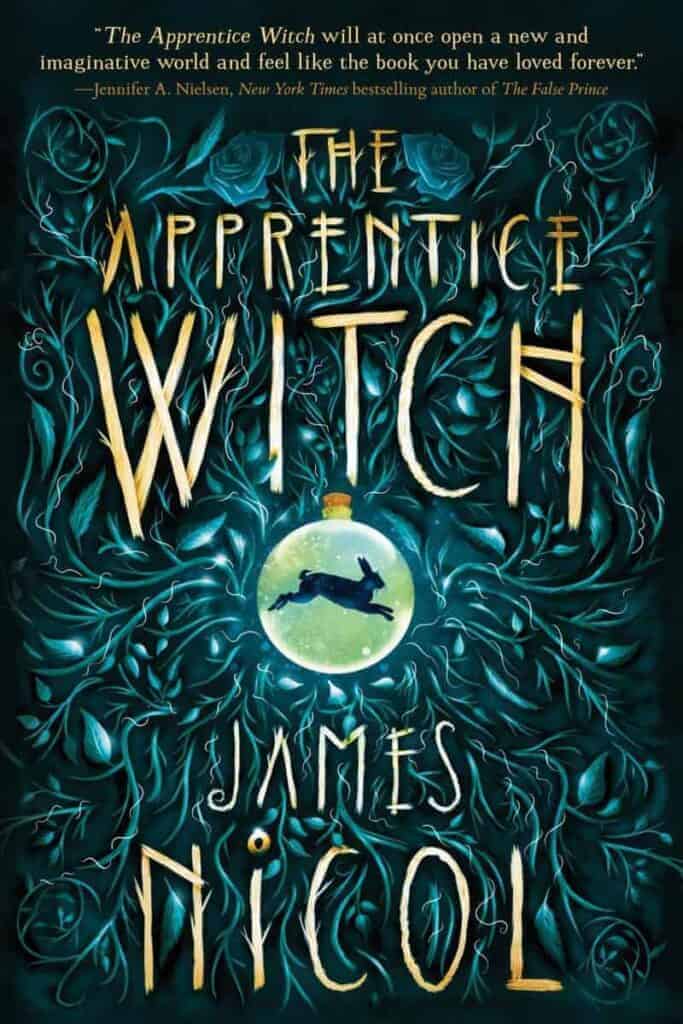 The Apprentice Witch by James Nicol
Arianwyn can’t believe she’s failed her witch exam nor that she’s sent to a small town to be their witch anyway. There she faces unexpected dark spirits, meets new friends, and conquers the worrisome glyph she keeps seeing. This is an entertaining fantasy book for anyone who loves magic and underdog heroines. 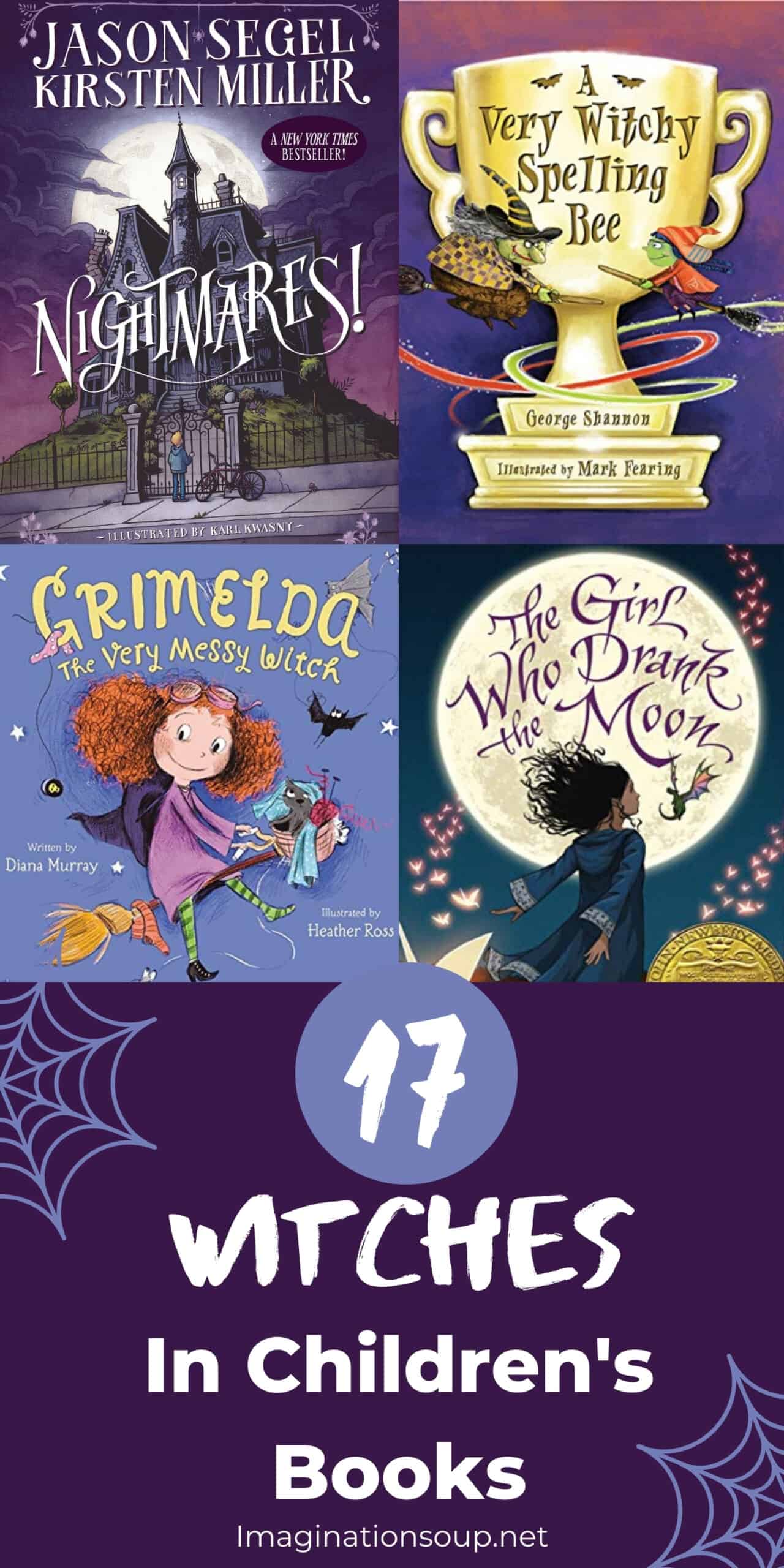 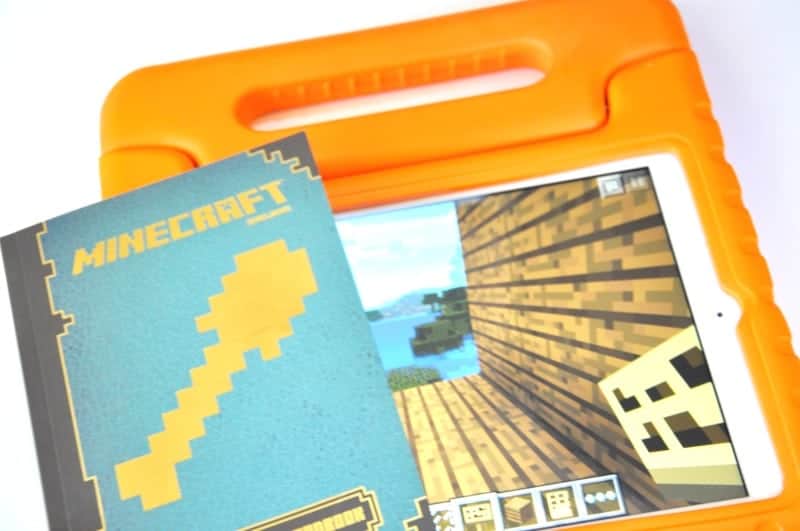 How to Help Your Child with Spelling 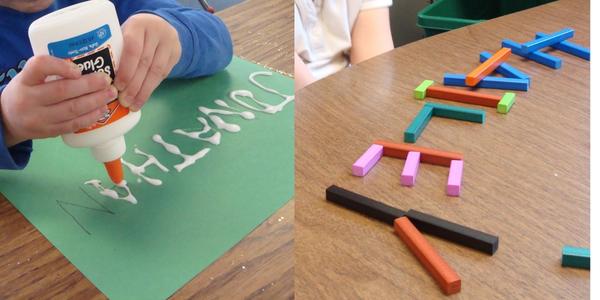