I’m excited for this nonfiction book list because there are so many great books! Many of these, you’ll soon see on my best of the year list. 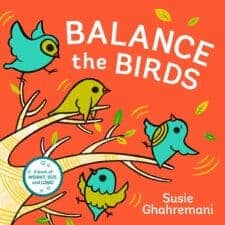 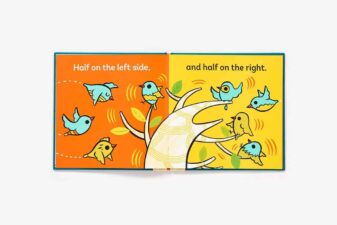 Balance the Birds by Susie Ghahremani
This book simplifies the math concept of weights and balances as birds land and leave the tree branches in captivating, whimsical illustrations. 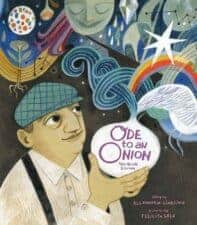 Ode to an Onion Pablo Neruda & His Muse by Alexandria Giardino, illustrated by Felicita Sala
This picture book biography shares a snippet of Pablo Neruda’s life, giving readers an important life lesson while introducing this incredible poet. As he is struggling with sadness while writing about the situation of poor minors, Neruda’s friend Matilde shows him a truth about life using an onion. The truth is that sad and happy can coexist. “The onion’s papery skin crinkled in Palo’s hand… The scent burned Pablo’s eyes. Tears streamed down his checks… But then he noticed how the sunlight shone through the onion’s layers… “Aren’t onions beautiful? Matilde smiled. “Wait ’til you taste it.” The book ends with Neruda’s “Ode to the Onion” which shows his ability to craft meaning through the complexity of simple language. 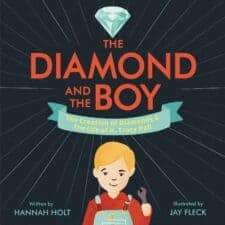 The Diamond and the Boy: The Creation of Diamonds & the Life of H. Tracy Hall by Hannah Holt, illustrated by Jay Fleck
Brilliantly conceived and exceptionally written using a parallel storytelling like I’ve never read before. The structure shows the similarities between the earth and the boy with HEAT, PRESSURE, CHANGE, and WAITING. As we read, we learn about the graphite in the earth and the curious boy who finds solace in the library. We see the diamonds waiting to be discovered. And Tracy who works in a lab, patiently working on his own invention — a machine that makes diamonds. Added to: Best 2018 Nonfiction Children’s Books 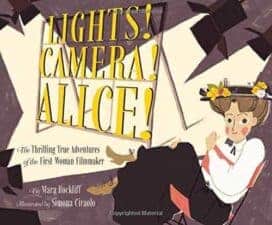 Lights! Camera! Alice! The Thrilling True Adventures of the First Woman Filmmaker  by Mara Rockliff, illustrated by Simona Ciraolo
Set up like both a picture book and an old-fashioned movie with dramatic titles, this biography captures the gumption of a French girl named Alice who envisioned telling stories using newly invented movie cameras on a big screen with color and sound. When Alice moved to America, everyone thought Thomas Edison invented movies but with no sounds or colors. In America, she started a family and built a modern movie studio in New York. However, in the end, the Hollywood studios took her business and she moved back to France. To set the record straight about women in film and her own contribution, she wrote a memoir, The Memoirs of Alice Guy Blanche. Beautiful illustrations. 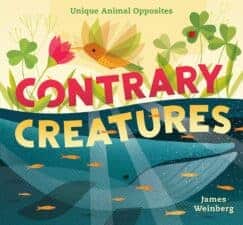 Contrary Creatures by James Weinberg
What a lovely introduction to animals with simple descriptions and unique illustrations! “Some move very slowly . . . but some are fast.” You’ll find yourself with plenty to discuss. Plus, you’ll enjoy the variety of creatures and the unique dotty illustrations. 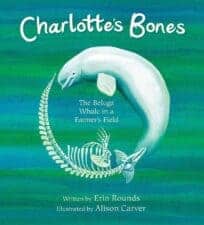 Charlotte’s Bones: The Beluga Whale in a Farmer’s Field by Erin Rounds, illustrated by Alison Carver
Erin Rounds’ writing feels like magic as she transports us back in time and back again, capturing the beautifully tragic life of one beluga whale who swam over what is now Vermont, U.S.A. “Her milky, smooth, muscled body sliced slowly through the water like scissors through silk.” But, Charlotte gets stuck in a tide pool. Her pod leaves her. Her body dies and thousands of years pass. Woolly mammoths and giant sloths disappear from the land. The land lifts. “Charlotte lay undisturbed for 11,500 years.” In 1849, railroad workers discover Charlotte’s bones. “In the middle of a farmer’s field, ten feet beneath the ground, the bones of a white whale had whispered the truth of the valley’s distant past.” The writing is excellent! Use this book as a mentor text to teach showing not telling, imagery, and sentence fluency. It’s also a lovely example of how to make science come to life through a narrative story. Brilliant job on every level.  Added to: Best 2018 Nonfiction Children’s Books 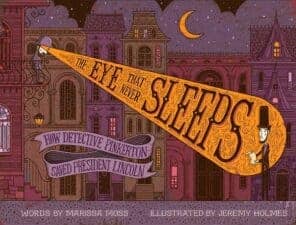 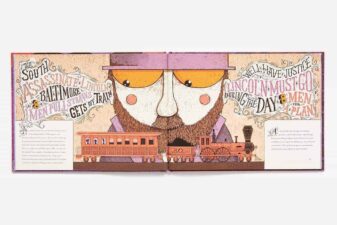 The Eye That Never Sleeps How Detective Pinkerton Saved President Lincoln by Marissa Moss, illustrated by Jeremy Holmes
I adore this book. First of all, the artwork is a STUNNING period style which looks similar to woodcut and is primarily done in orange, purple and brown plus speech bubbles with an old-fashioned typeface. Second of all, the story itself is enthralling. Allan Pinkerton stumbles into detective work accidentally– and he’s really good at it. He knows human behavior and uses deduction and observation. He founds the Pinkerton Agency which is credited with solving more than 300 murders and recovering millions in stolen money. But he’s most famous for hiring Kate Warne to protect the soon-to-be President of the United States, Mr. Lincoln, from a dangerous train assassination plot. You might not know that when Mr. Lincoln becomes president, he creates the Secret Service agency to spy on the Confederacy and catch spies. Guess who he hires to lead it? Allan Pinkerton, of course. This is top notch narrative nonfiction right here!  Added to: Best 2018 Nonfiction Children’s Books 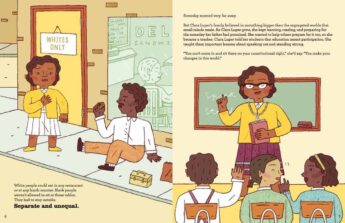 Someday is Now: Clara Luper and the 1958 Oklahoma City Sit-Ins by Olugbemisola Rhuday-Perkovich, illustrated by Jade Johnson
There’s so much to love about this picture book — the captivating folk-art style illustrations with an earthy color palette, the repetitive text of “separate and unequal” and “someday was now,” plus the well-written, compelling true story!! It’s about an amazing woman named Clara who advocated for justice and equality during a time when black people weren’t permitted the same rights as white people. As a teacher, she inspired her students to believe that change was possible. Clara and her students went to the Katz drugstore and asked to be served — even though the store didn’t serve black people. She and her students returned day after day despite people yelling and throwing food. Eventually, the Katz store relented. They started to serve people of all races. Clara and her students finally could enjoy a Coke and burger without trouble. (And then prepare for the next segregated store demonstration.)  Added to: Best 2018 Nonfiction Children’s Books & Best Biographies for Women’s History Month 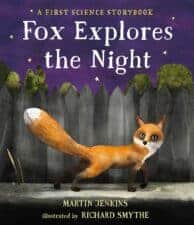 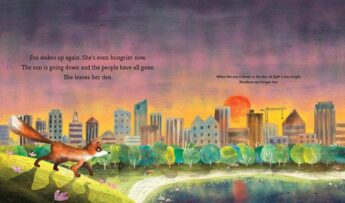 Fox Explores the Night by Martin Jenkins, illustrated by Richard Smythe
A nocturnal fox searches for food in a busy city. She finds supper in someone’s backyard then returns home. It’s a purposefully simple book with guided questions in the back such as “Can you find examples of different light sources in the book?” Added to: Best Nonfiction Books for 5 and 6 Year Olds 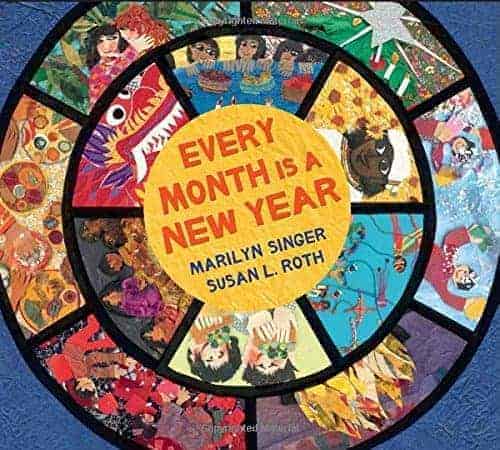 Every Month Is a New Year by Marilyn Singer, illustrated by Susan L. Roth
Poems paired with incredible collage artwork celebrate the months of the year and the unique holidays that are celebrated around the world. From the Hogmanay in Scotland celebrated December 31 to the We Tripantu festival for winter solstice in Chile (in June) to India’s Diwali celebration in November, this book introduces readers to lively customs and cultural celebrations. This is a good choice for any school library. 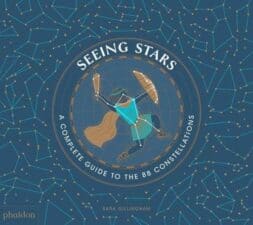 Seeing Stars: A Complete Guide to the 88 Constellations by Sara Gillingham
Although it’s not written in alphabetical order, this book is a helpful field-guide if you use the index in the back. I honestly don’t get how it’s organized so that’s a big drawback to me. Each constellation includes its location, how to find it, stories and myths, and a large full-page illustration. 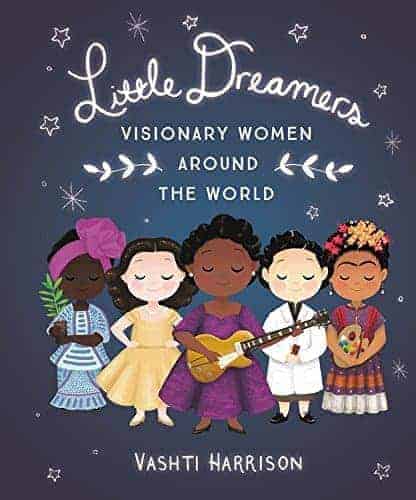 Little Dreamers Visionary Women Around the World by Vashti Harrison
Harrison’s artwork is stunning– framable I think. This book features the biographies 35 women; women like Ada Lovelace, Marie Curie, and Grace Hooper. Each biography is one page paired with an illustration. The information shares more about the woman’s contributions to the world like the physicist who experimented with subatomic particle decay. Added to: Best Biographies for Women’s History Month and Best Nonfiction Books for 10 Year Olds 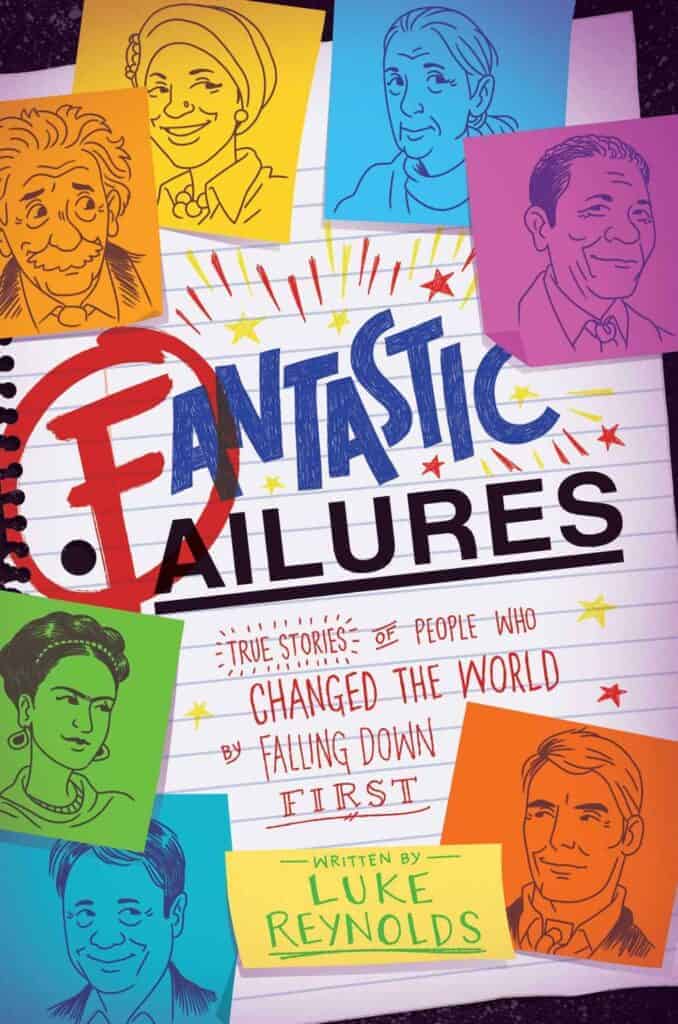 Fantastic Failures: True Stories of People Who Changed the World by Falling Down First by Luke Reynolds
Reynolds is a talented writer who captures the essential information of each person’s life but first, he writes a tongue-in-cheek account of their fantasy story where everything goes right and nothing goes wrong. I love that! Then he writes the truthful biography in such a way that makes you want to keep reading. Each one has a story arc, description, and quotes or dialogue. It’s clear that Reynolds did lots of research as each chapter is informational with many endnotes. I can see this book being useful in the classroom to teach and model nonfiction writing. Also, it will be a good choice for kids who love reading nonfiction, particularly biographies. The benefit of a book like this with short essays is that kids can start and stop anywhere. 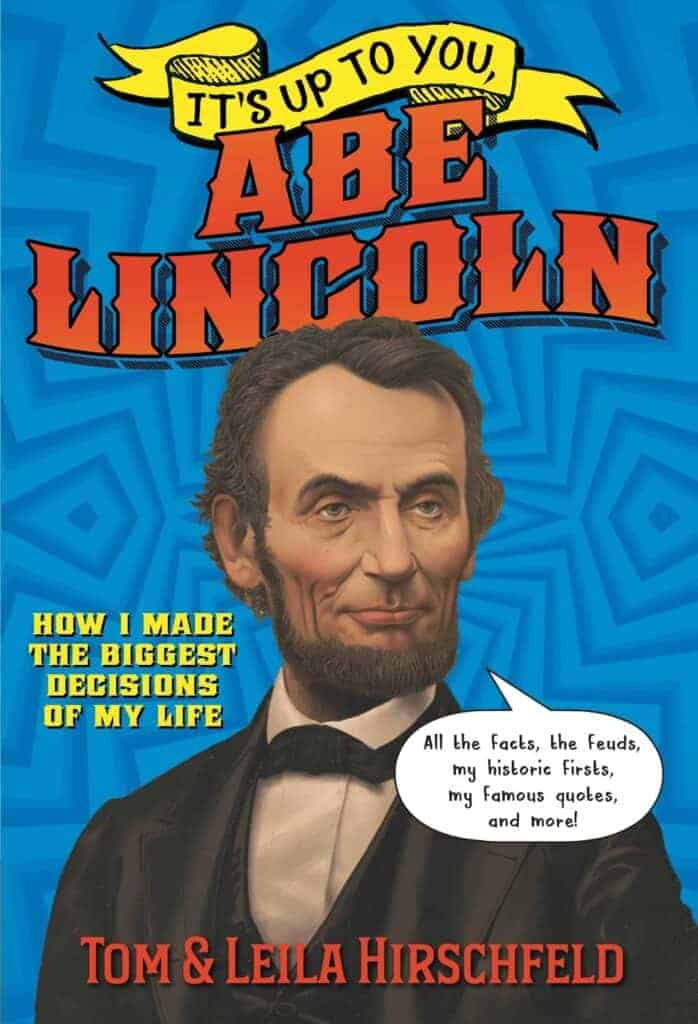 It’s Up to You, Abe Lincoln: How I Made the Biggest Decisions of My Life by Tom & Leila Hirschfeld
Written in the second tense “you,” this book puts you squarely in the driver’s seat as Abe Lincoln. It describes your life starting from childhood with photos, fun facts, and quizzes of “What Would You Do?” For example, when you’re considering marrying Mary What Do You Do? You’ll be given a list of four choices, each with elaboration. The choices, in this case, are: A. Break up with Mary. B. Date other women. C. Marry fast, before your feet get even colder. D. Consult a pastor. Then, you’ll read the reveal — what choice you made. (A. Break up with Mary.) The writing flows smoothly, the layout is eye-catching, and the information is interesting and historically important.  Added to: Best 2018 Nonfiction Children’s Books and Best Nonfiction Books for 11-Year-Olds 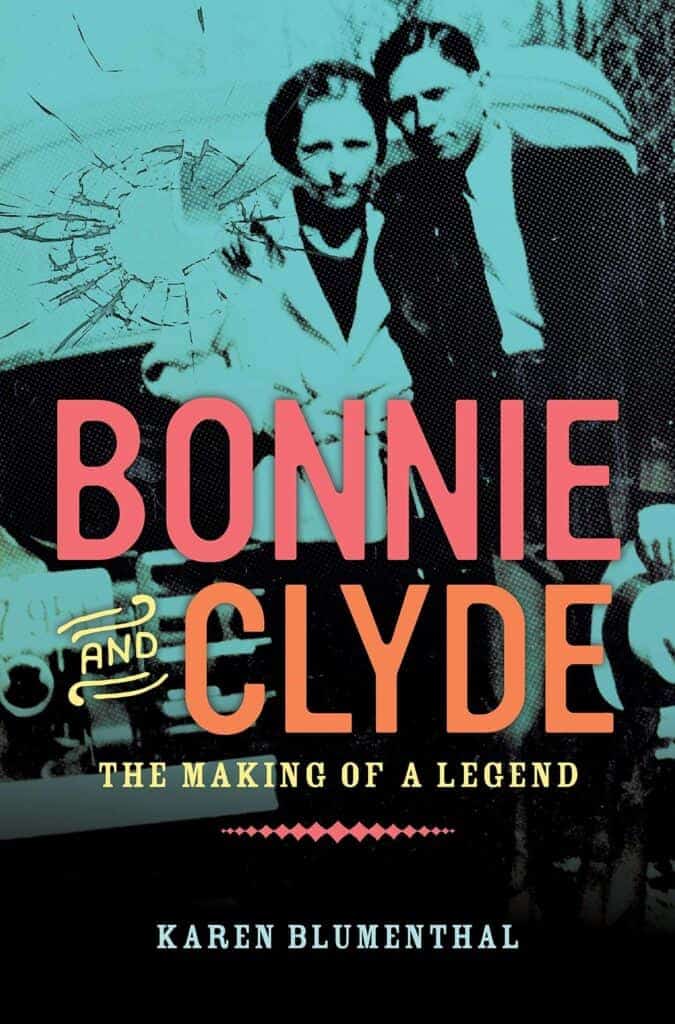 Bonnie and Clyde: The Making of a Legend by Karen Blumenthal (YA, ages 13+)
Well-written, well-researched, and completely fascinating. I read this book start to finish in one sitting. I like how at the beginning of each chapter, Blumenthal quotes from the poem written by Bonnie herself called “The Story of Bonnie and Clyde.” It sets the tone as she traces the lives of these two notorious criminals starting with childhood and ending with their deaths. What struck me was the dichotomy between how much these two valued their families but not any other human lives…they killed a lot of people and yet became immortalized through the media as sympathetic vigilantes. This biography doesn’t take a side but shows the facts as best can be known. 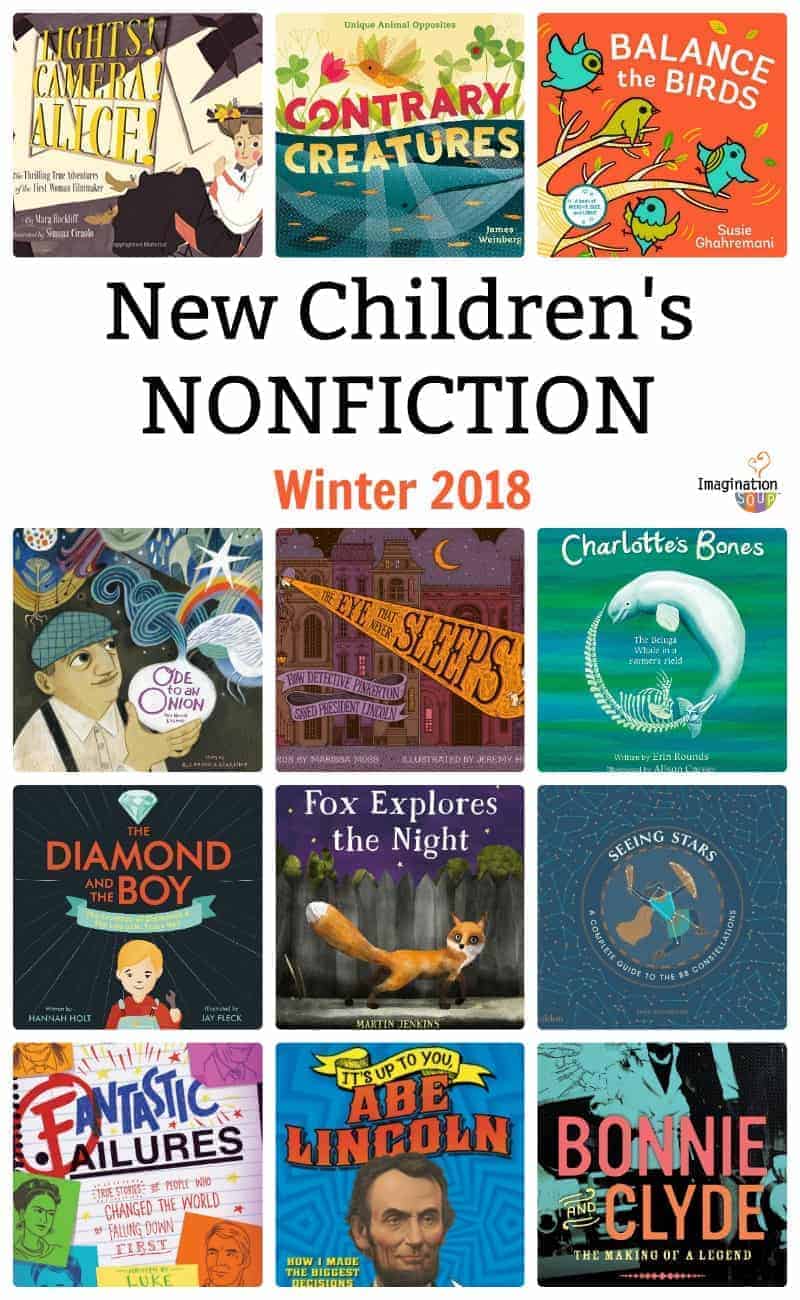 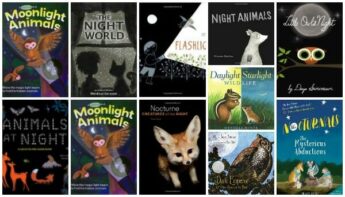 What’s in the Dark? 20 Books About Nocturnal Animals