The Top Hockey Books for Kids 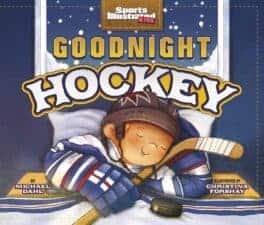 Goodnight Hockey (Sports Illustrated Kids) by Michael Dahl, illustrated by Christina Forshay
ages 1 – 5
At the city’s outdoor arena, the hockey action is fast-paced and easy to follow through the book’s narration and illustrations. And when it’s game over, the kids happily say good-night. I’m impressed at how well Goodnight Hockey introduces young children to the game basics. 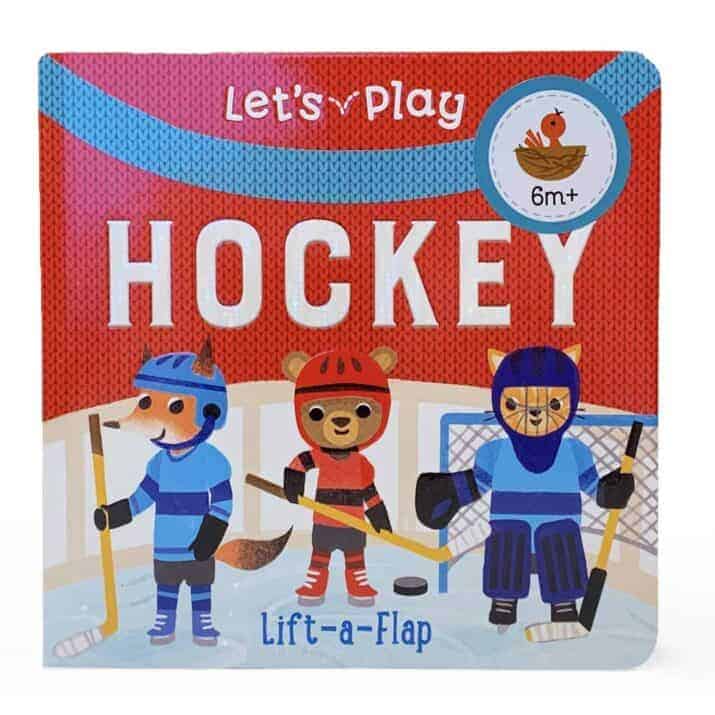 Let’s Play Hockey by Ginger Swift, illustrated by Katheryn Selbert
ages 1 – 4
What an adorable lift the flap board book all about hockey! Learn the basics with animal players who introduce words like goalie and referee. 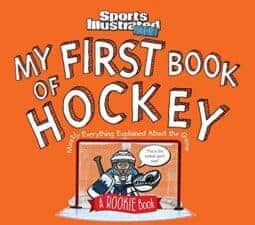 My First Book of Hockey Sports Illustrated Kids A Rookie Book
ages 1 – 5
I highly recommend this informative book of cool graphics, simple text, and full color photographs that will teach young children about the game of hockey. 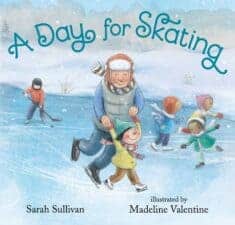 A Day for Skating by Sarah Sullivan, illustrated by Madeline Valentine
ages 1 – 5
A simple slice of life book about ice skating in the winter. The lyrical, rhyming text shows the experience of being on the ice, racing, playing hockey, falling down, and more. 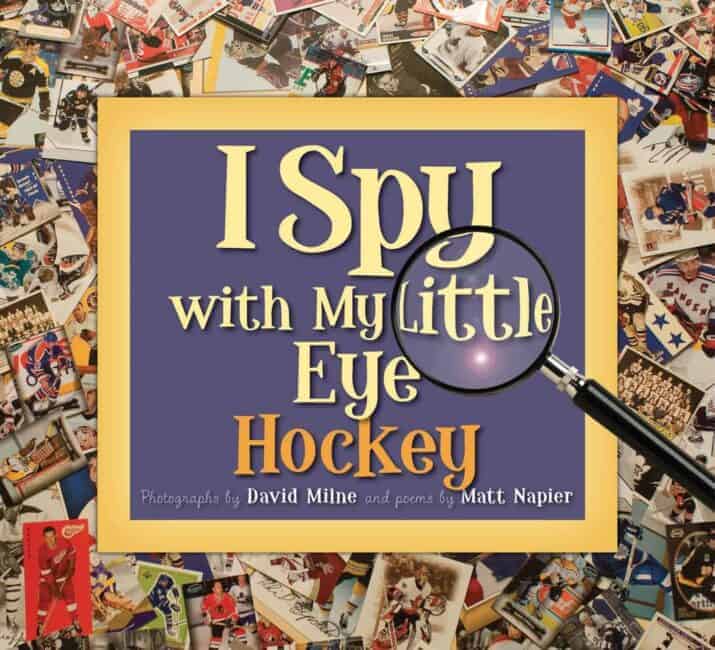 I Spy with My Little Eye Hockey by Matt Napier
ages 1 – 5
Search carefully in the hockey-related photographs to spot the differences between photographs. 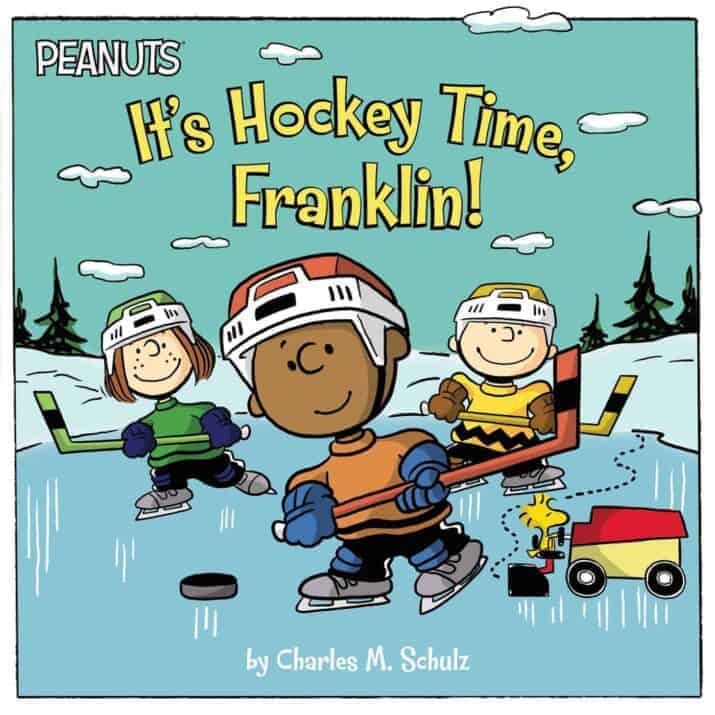 It’s Hockey Time, Franklin (Peanuts) by Jason Cooper, Charles M. Schultz, and illustrated by Scott Jeralds
ages 4 – 8
The Peanuts gang needs to work out their differences to everyone can share the pond and play hockey. They decide to share the ice only if Franklin’s team wins the next game. 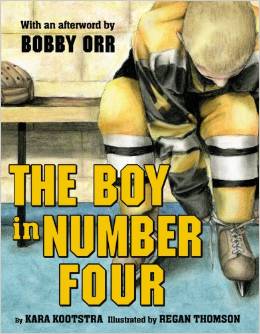 The Boy in Number Four by Kara Kootstra, illustrated by Reagan Thomson
ages 4 – 8
I enjoyed this picture book about Bobby Orr’s life as a young boy playing hockey — how hard he worked and how much he loved playing. 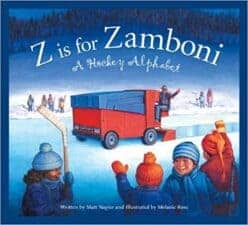 Z is for Zamboni by Matt Napier, illustrated by Melanie Rose
ages 2 – 8
Learn about hockey with this illustrated alphabet book. Each page contains a basic description of the word, an illustration, ad a sidebar with more in depth information. 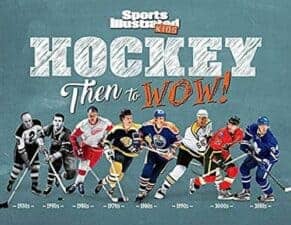 Hockey Then to Wow! Sports Illustrated Kids
ages 4 – 12
Whenever I volunteer in the school library, I see groups of kids huddled up reading sports facts books just like this one. I think elementary kids, especially hockey fans, will devour the pages of this book, too. From the beginnings of hockey to the present day, readers will learn about old-style skates to current skates, and gear including outfits, famous players, coaches, and teams. For hockey players and fans, this is a must-read. 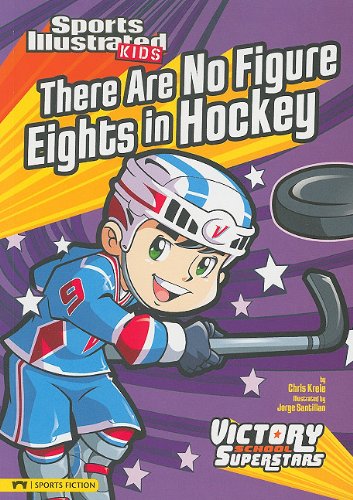 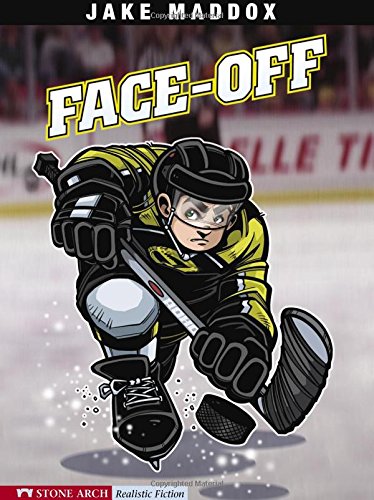 Face-Off by Jake Maddox, illustrated by Sean Tiffany
ages 6 – 9
This book is perfect for hockey fans who need a beginning chapter book to get them excited about reading. This story starts out fast and furious in the middle of Kyle’s game. He’s hoping to match his brother’s scoring total but his teammate Connor hogs the puck all the time. Find more Jake Maddox sports books here. 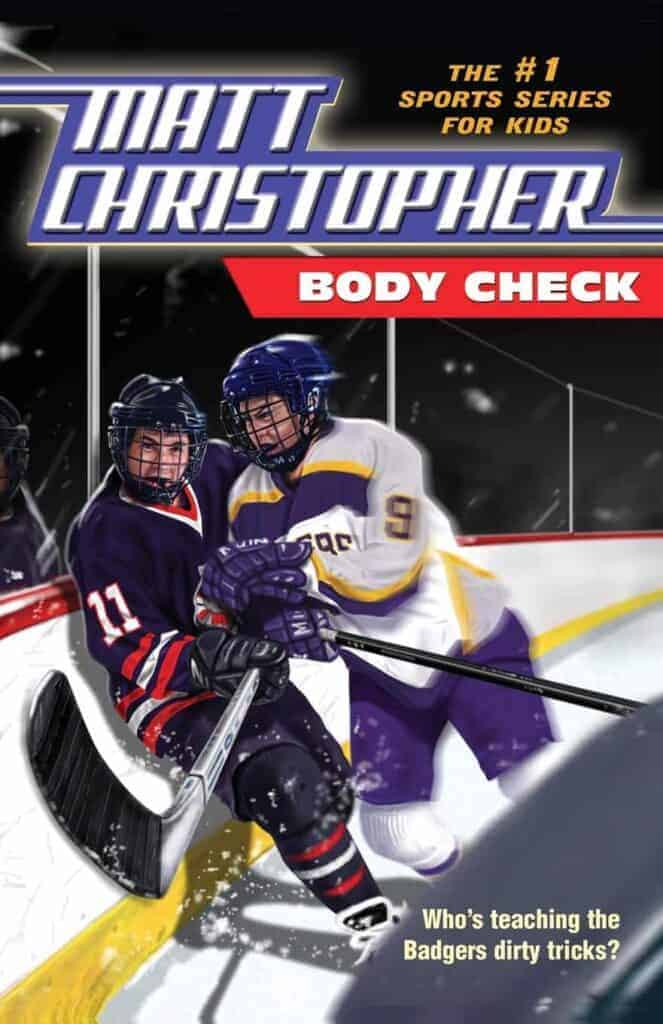 Body Check by Matt Christopher
ages 8 – 12
Brent is a 12-year-old player who learns that his team’s new coach is teaching players illegal moves so they’ll win at any cost. What will he do– go along with it or make a hard decision? 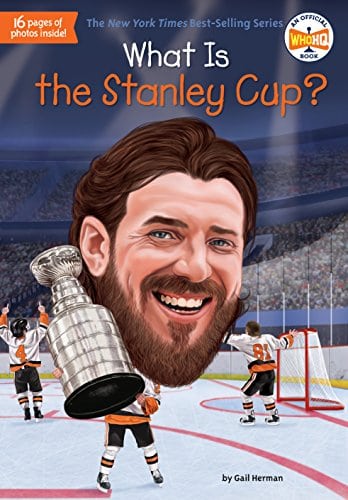 What Is the Stanley Cup? by Gail Herman
ages 6 – 9
Learn about the National Hockey League’s championship game, The Stanley Cup — how it started, how it continued through tough times, and now. 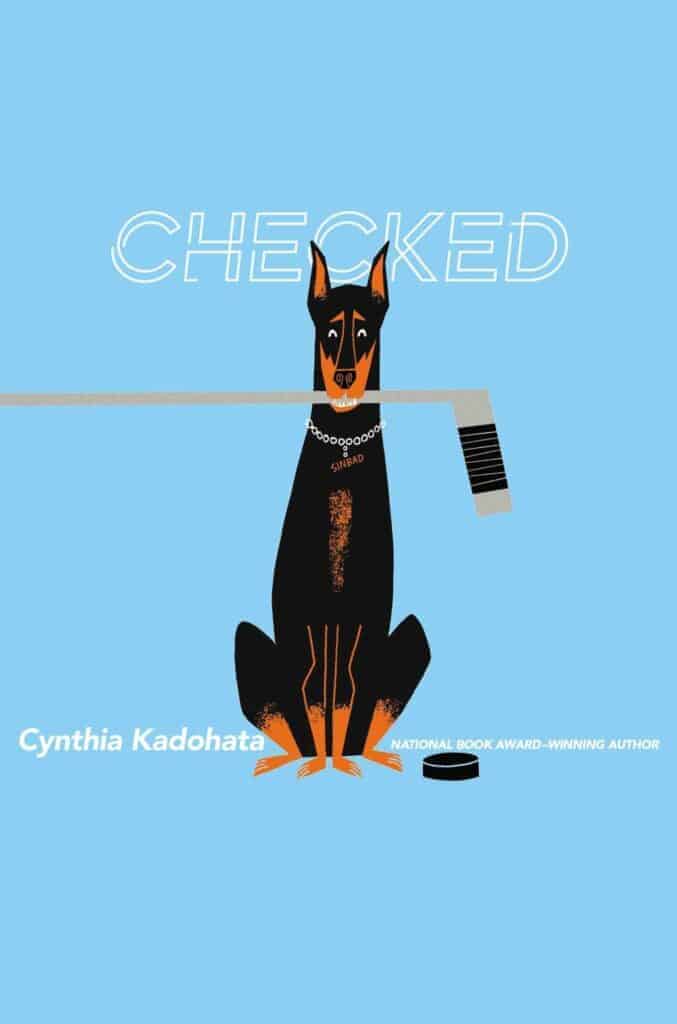 Checked by Cynthia Kadohata, illustrated by Maurizio Zorat
ages 8 – 12
Checked is a slice of life story about a boy who lives for hockey but worries about his sick dog, his policeman single dad, and money. While it did surprise me that there wasn’t a major conflict, the atmospheric snapshot of the boy’s life felt authentic and held my interest. 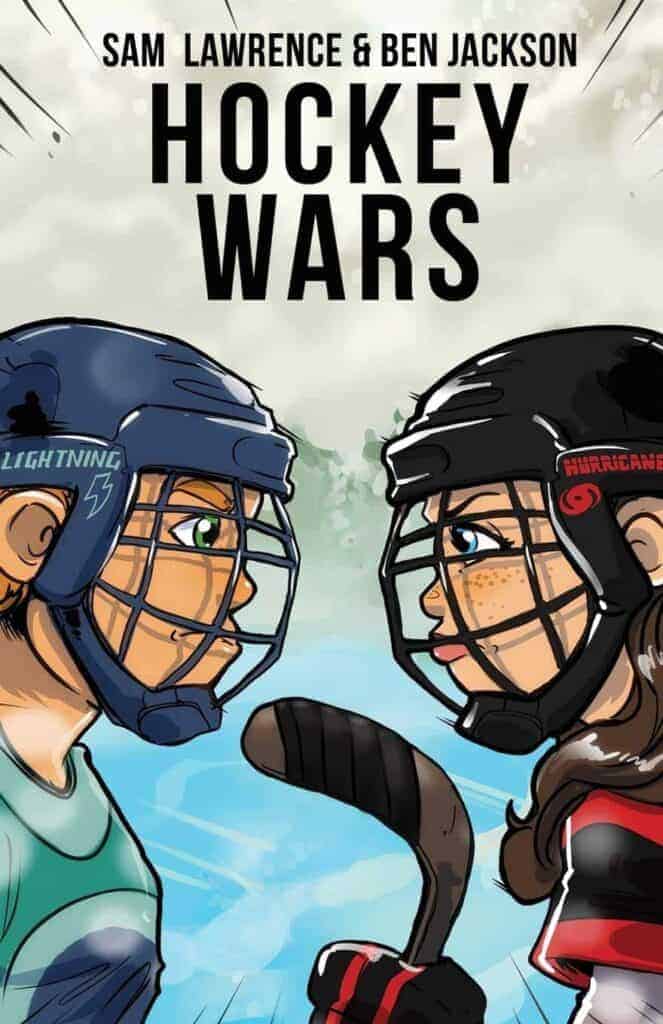 Hockey Wars by Sam Lawrence and Ben Jackson
ages 8 – 12
Mille and Cameron have been best friends forever but when they’re put on different teams (a boy team and a girl team,) their friendship deteriorates. Now they’re fighting a war of who is the best at hockey– boys or girls. 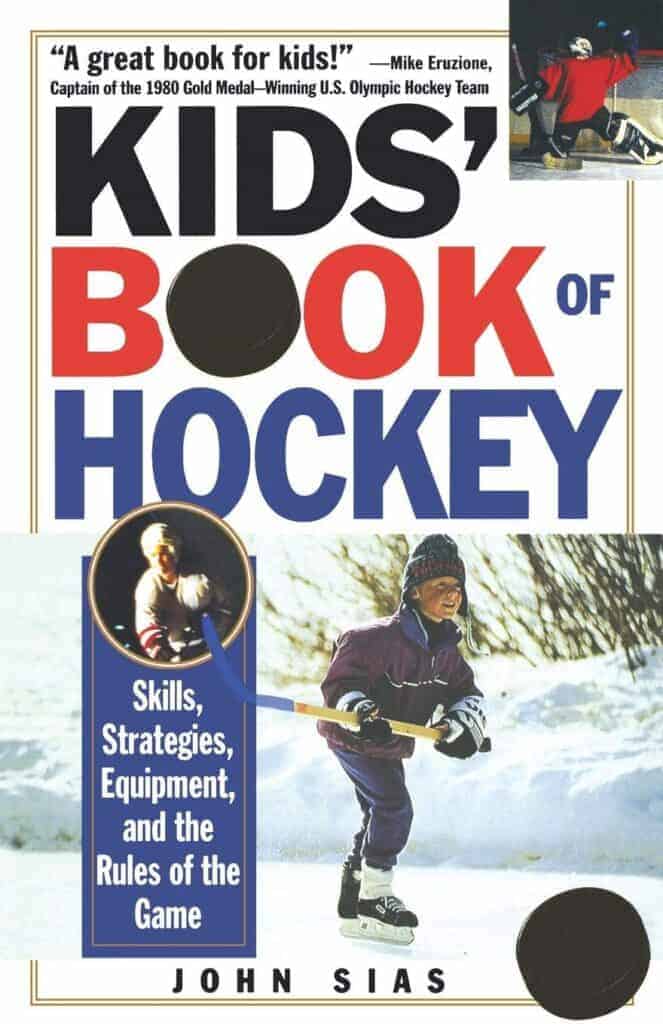 Kids Book of Hockey by John Sias
I don’t love the black and white photographs or the design of this book but it contains information about the basics and techniques that might be helpful to beginning players. 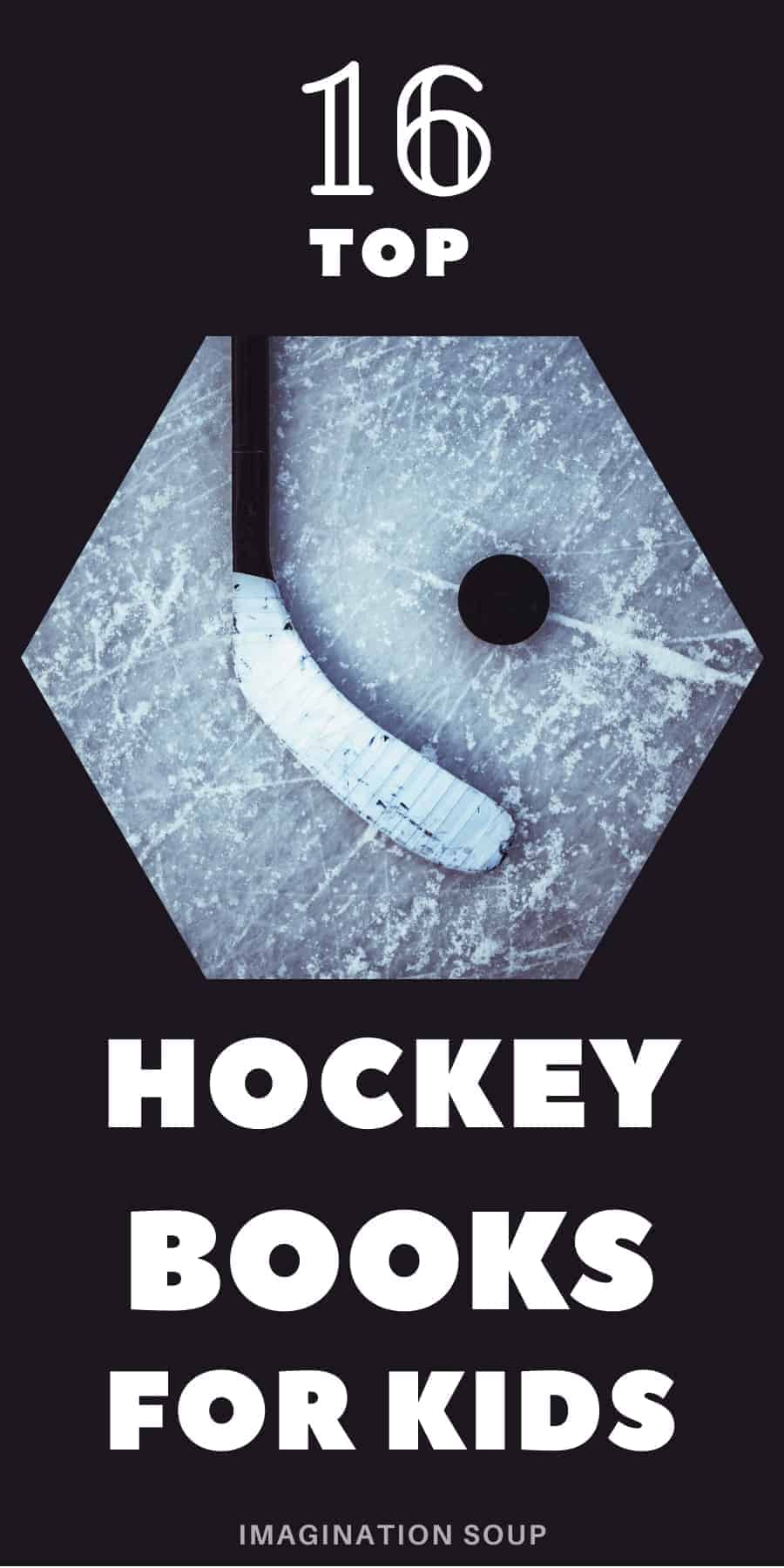 The Best Basketball Books for Kids