My goodness, so far this year’s chapter books have been a mixed bag. I probably abandoned about 20 titles that weren’t worth my time — or yours. Fortunately, all is not lost. Thankfully, good chapter books still are being published. Here are the books I recommend from the last few months. I hope they give your readers enticing new options for what to read next. 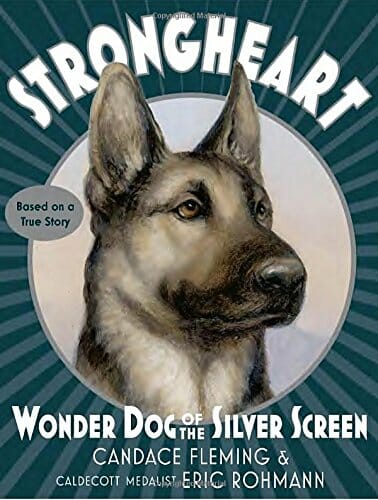 Strongheart: Wonder Dog of the Silver Screen by Candace Fleming, illustrated by Eric Rohmann (ages 7 – 10)
REALISTIC / HISTORICAL FICTION / BOOKS ABOUT DOGS
You will love this story about a real dog’s life. From his beginnings as a maltreated German police dog to subsequent adoption and new life as a beloved movie star, this suspenseful story is filled with both love and hope along with false accusations and jail time. Readers will zip through this heart-warming story with fascination; dog lovers will be extra impressed with this German Shepard’s incredible story. Fantastic black-and-white illustrations throughout and easier text, make me think this is about 2nd or 3rd grade reading level. 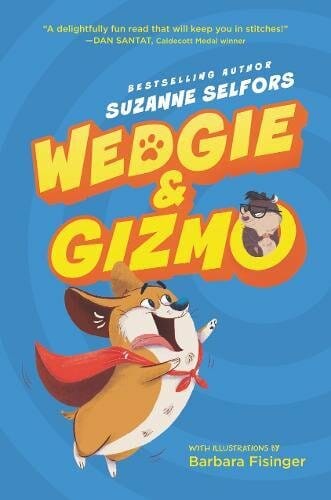 Wedgie & Gizmo by Suzanne Selfors, illustrated by Barbara Fisinger (ages 7 – 10)
DIVORCE / HUMOR
Dog owners will nod along with the ADHD stream of conscious narration of of Wedgie, the barkie dog who LOVES everything. Contrast this with the diabolical plotting narration of the evil genius guinea pig Gizmo (remind anyone of Pinkie and the Brain?) who is horrified to be living in a Barbie house instead of his own habitat. The two pet’s alternating narrations show a newly blended family which Gizmo’s servant / owner, Elliot, is not happy about. Selfors skillfully addresses a family in transition through the humorous lenses of the pets. I hope we hear more from these two. Added to: Best Read Alouds for 2nd Grade 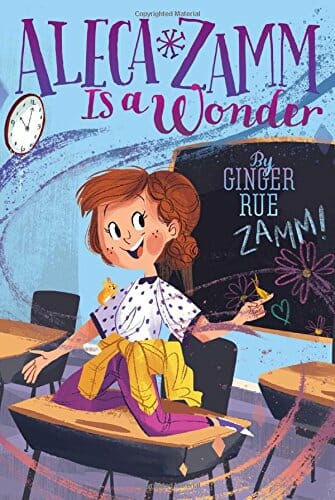 Aleca Zamm is a Wonder by Ginger Rue, illustrated by Zoe Persico (ages 7 – 10)
FANTASY
Honestly, I was surprised at how much I enjoyed this well-written, fast-paced adventure book, the first in a new easy chapter book series. On her 10th birthday, Aleca accidentally discovers if she says her full name, she can STOP TIME. Which helps her on her math test. Then her Aunt Zephyr arrives and explains a few things about being a Wonder. One, other Wonders who aren’t very nice could use those time stops to find Aleca. And two, she needs to learn how to control her power so it won’t control her. And three, a 10-year old shouldn’t be in charge of the world clock. 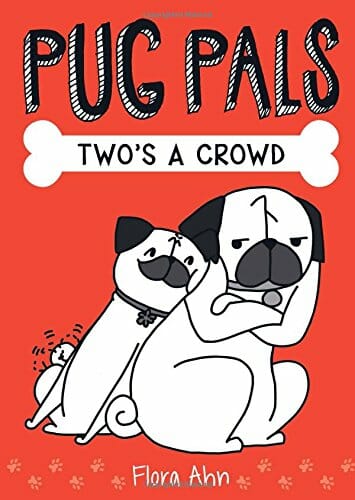 Pug Pals Two’s a Crowd by Flora Ahn (ages 7 – 10)
NEW SIBLING / HUMOR
Sunny’s whole life is turned upside down when her owner brings home a new sister, Rosy. It’s hard to share her owner’s time, and especially hard to share her toys. Adorable illustrations show these personality-filled pugs who eventually develop a solid sister bond while looking for Sunny’s lost Mr. Bunny toy. The text is quite simple. I’d say this would be a good choice for first graders. 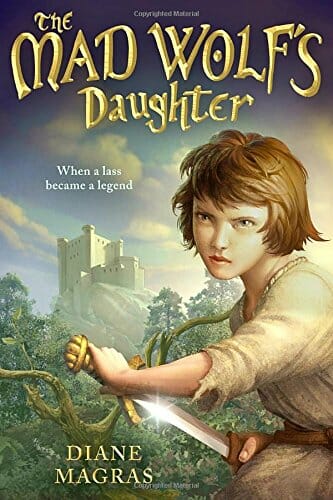 Mad Wolf’s Daughter by Diane Magras (ages 9 – 12)
FANTASY / HISTORICAL
Set in medieval Scotland, this is an action-packed adventure of a strong female protagonist with close family bonds, medieval and mythical elements, and an exciting plot. When Drest’s war-band family is kidnapped by knights she sets off in pursuit, taking a wounded soldier hostage with her. Throughout their travels, the two develop a complicated friendship and Drest learns uncomfortable truths about her family. I love when a girl rescues boys from death! What an excellent story — I highly recommend it. 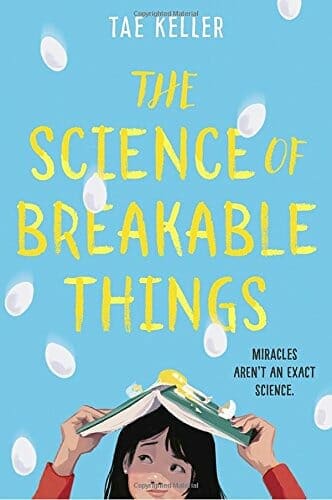 Science of Breakable Things by Tae Keller (ages 9 – 12)
COMING- OF-AGE / MENTAL ILLNESS
Whoa. This children’s middle grade book touched my heart so deeply. Natalie wants to figure out how to help her mother, who we gather is depressed (in her bed all day long, no longer working.) As Natalie prepares for an egg drop contest with two other kids, she looks at her mother’s situation with the same scientific process zeal. Her ultimate plan is to win the contest then use the prize money to whisk her mother away on a special trip. Throughout the story, we see Natalie’s friendships develop as well as the difficult understanding that life, and depression, not an exact science. It’s a beautiful, well-done story and a compassionate look at depression. (Added to Mental Illness in Children’s Books.) 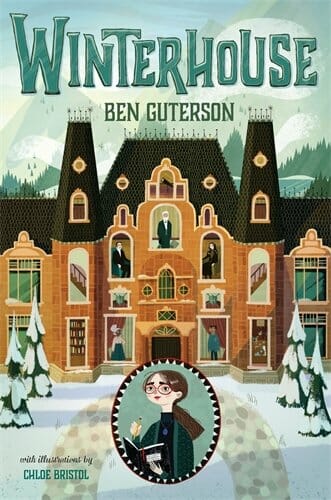 Winterhouse by Ben Guterson, illustrated by Chloe Bristol (ages 9 – 12)
FANTASY
Elizabeth, an orphan, is unexpectedly sent to a large, stately hotel with a kind, grandfatherly proprietor for Christmas vacation. There, she discovers a magical book, a sinister couple, a family mystery, and a new friend who loves puzzles as much as she does. The writing is mesmerizing, the mystery fascinating, and the characters, enchanting. This is a delightful, atmospheric read. 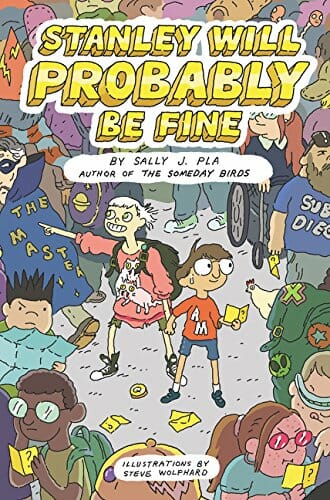 Stanley Will Probably Be Fine by Sally J. Pla, illustrations by Steve Wolfhard (ages 9 – 12)
REALISTIC / SPD
Comic book geeks (YAY!) and kids with sensory processing disorder (SPD) will find a kindred spirit in Stanley Fortinbras. He agrees to compete in comic book trivia contest to help save a friendship, even though large crowds make him very anxious. In the end, his friend ditches Stanley but to save face, Stanley and his new homeschooled neighbor, Liberty team up. The contest takes them all over the city, something very challenging for Stanley. When Liberty’s mom picks her up, and he’s left alone, Stanley must use all his strategies to get through to the end. As a parent of a child with sensory processing issues and anxiety, I’m not totally convinced a person can use mind over matter strategy for this kind of situation but I certainly hope that is possible. Added to Learning Differences in Children’s Books 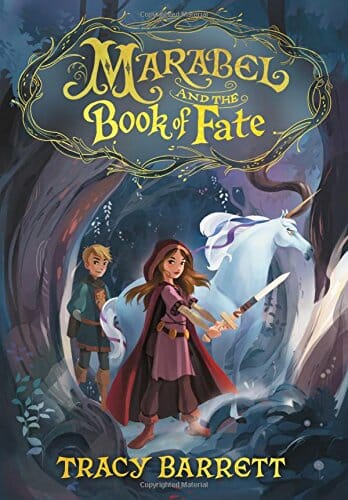 Marabel and the Book of Fate by Tracy Barrett (ages 9 – 12)
FANTASY
If you’re looking for a light-hearted fantasy story, this title fits the bill. Marabel, her servant friend, and a unicorn with a big personality leave their realm to rescue Marabel’s twin brother from their evil queen aunt in a neighboring kingdom full of magical creatures. They’ll be captured by giants, imprisoned by the queen, but eventually escape with a new understanding of the situation in both countries. A situation that Marabel might be able to fix. (added to: 22 Magical Children’s Books About Unicorns) 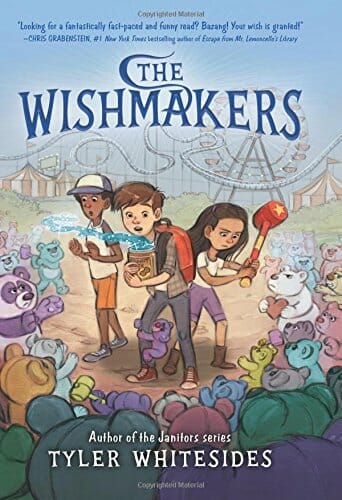 The Wishmakers by Tyler Whitesides (ages 9 – 12)
FANTASY / ADVENTURE
If you like goofy stories with magic and adventure, you’re going to love this story. It’s about a foster kid named Ace who opens a peanut butter jar only to release a genie named Ridge. Ridge tells Ace that Ace is a Wishmaker and now he must complete a mission in seven days OR ELSE all dogs and cats will turn into zombies … and destroy mankind. So begins a wild quest across America. And even though Ace has unlimited wishes, every wish has a (usually weird) consequence. So if he gets his wish to fly, his consequence is that any bird near him will poop on him. One big wish made his arm fall off for a day. It’s a goofy, entertaining story that ends with another Wishmaker being kidnapped by an ancient, evil genie setting it up for the next book in the series. 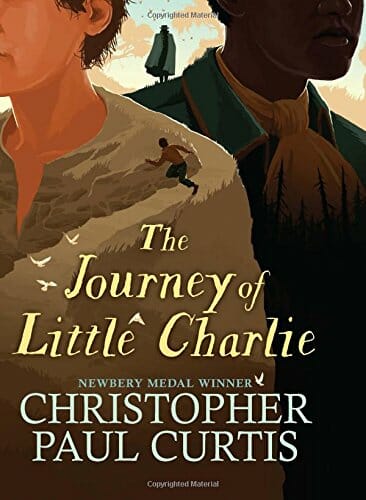 The Journey of Little Charlie by Christopher Paul Curtis (ages 9 – 12)
HISTORICAL FICTION
Historical fiction written in dialect, this is the story about a boy who, in order to pay a debt, must search for escaped slaves with the nasty Cap’n Buck all the way north in Canada. It took me a while to fully get into the story but I liked learning the history of Canada’s protection of escaped slaves. 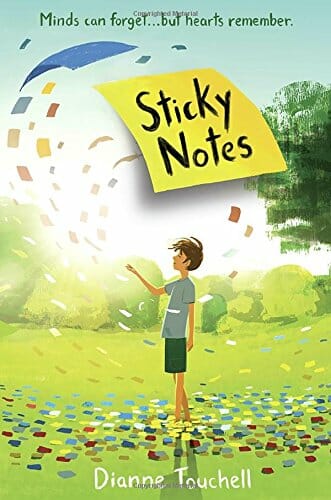 Sticky Notes by Diane Touchell (ages 9 – 12)
REALISTIC / AGING
I felt sad throughout this entire story, mostly because I know someone this has happened to. But, that’s why I think it’s an important book so that kids are exposed to what Alzheimer’s looks like, in particular, early-onset. 10-year-old Foster sees his dad’s personality disappear little by little throughout this story. As this happens, his mom becomes more and more stressed out. An aunt arrives to help which makes things both more stressful and better. It’s all is very hard. Because there isn’t a cure; there isn’t a recovery from this. There is only acceptance of the new situation. 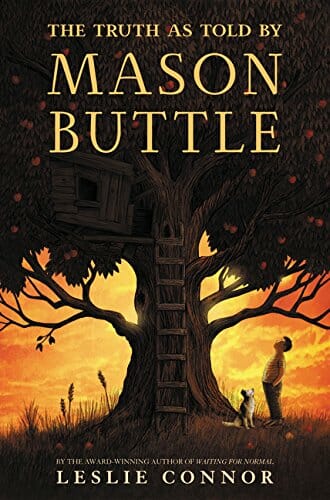 The Truth as Told by Mason Buttle by Leslie Connor
REALISTIC / LEARNING DIFFERENCES
Mason’s a big kid with severe learning disabilities, an overactive sweat gland, and a dead best friend named Benny. As the story progresses, we see Mason’s confusion at why the police keep pestering him about the day his friend died. We know he’s a suspect but Mason doesn’t see it. Mason befriends another kid who is also bullied by the neighbor boys. This story is primarily about their growing friendship. Then, a situation reveals the truth about Benny’s death … which I was anxiously awaiting. I only wish the pacing were a bit faster. Added to Learning Disabilities in Children’s Books