How to Stop Bullying

Bullying awareness campaigns are not enough. We need to know what to DO if our child is being bullied believes Jarrett Arthur, Krav Maga black belt and self-defense educator. We need to know how to stop the bullying.

We already know that being mean isn’t the same as being a bully.

And can we just get real right now? Walking away does not work. Come on. You and I both know it. Talking to Jarrett last week just confirmed this for me. And I decided something really big — I’ll tell you in a second.

Yes, you can try to talk to the parents of the bully first but expert Jarrett says and from experience I agree, “more often than not, the conversation is not constructive and it can escalate.”

Jarrett says that being aware of bullying isn’t practical enough. Kids need to know what to do.

Jarrett says that parents need to understand the 3 life skills their child needs to have so they can develop those. She explains to me over the phone how she does this in the Krav Maga classes for children. She says kids need three life skills to combat bullying: confidence, self esteem, and self-advocacy.

Practice with your kids how someone who is confident walks (posture), speaks, makes eye contact. In Jarrett’s classes she plays “Gumby” where partners help each other position their bodies to show confidence.

She suggests that parents look for ways that their kids can practice self-advocacy. Let them order for themselves at restaurants. If the order comes back wrong, teach kids how to politely ask for what they want and to stand up for themselves.

Jarrett’s biggest thing when it comes to bullying is to 1) have conversations and 2) role play.

But before you do any of this, you need to decide something HUGE.

“Parents come to me because their kids are being physically harmed at school and they’ve had enough. They want their kids to be equipped with skills to defend themselves,” says Jarrett. “Parents want kids to fight back to end the threat without too much physical damage. 9.9 out of 10, physically standing up and fighting back ends the bullying.”

If a child is chocked on the playground, that isn’t just bullying, it’s assault.

>>If your child is being physically harmed, is it really okay for your kid to do nothing?<<

I’ve decided that Jarrett is absolutely right. Walking away does not work. The kids just get beat down even more. Standing up for yourself, even physically does work and I’m ready to tell my kids this. 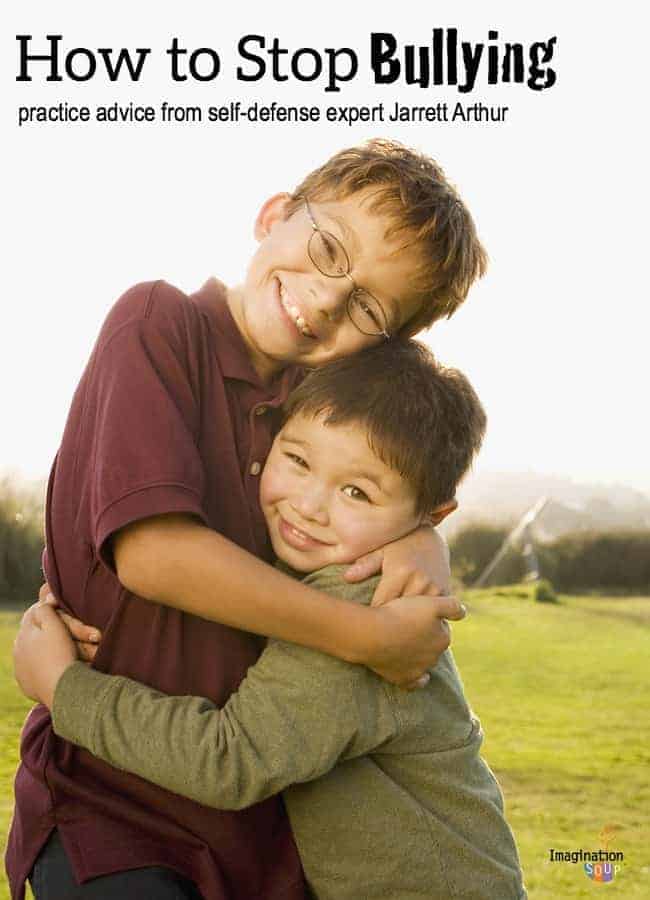 Now that I’ve decided and you’ve decided what is appropriate for your family it’s important to talk to your kids about it. After you talk, you need to role play so your child knows the words he can say and the body contact she can make.

Jarrett laughs and says, “I don’t tell my women’s self-defense students to fight back. That’s not helpful.” No, you have to show and practice WHAT to do and say. Not just say, “sock ’em,” because that isn’t going to help.

So, you must role play a lot — do it until you feel your child is empowered. It’s not a one time thing. Do this with consistency so your kids really internalize it.

Also, play games suggest Jarrett. She gives me an example: when you’re in public, name as many safe places and safe people as you can in 30 seconds.

Jarrett thinks enrolling your child in Krav Maga is really beneficial for kids. she tells me that Krav Maga teaches what makes sense on the street – outside of the dojo and competition ring. It’s not fancy or complicated. It’s about staying on your feet, moving, being able to do what you have to do to defend yourself against attackers of any size. It’s different than other martial arts which are more about deflecting and in some cases like Jiujitsu, are about fighting on the ground, which Krav Maga fighters would never do as it makes zero sense according to Jarrett. She says that the ground has limited ability to move or get up, limited ability to address other things like weapons, hard to create distance, and limited ability to defend yourself against multiple attackers. Krav Maga is the official self-defense system of the Israeli Defense Forces.

Jarrett Arthur’s passion is helping others transform through self-defense training and education, with a particular focus on women, mothers and children. One of the highest ranking female Krav Maga black belts in the U.S., Jarrett comes armed with years of teaching experience and has taught hundreds of men, women, and children over the course of her 10 year career. Jarrett has been featured as an expert on national television shows including Ellen, Access Hollywood and Good Day LA, as well as in numerous publications including Fitness Magazine and The New York Times. Find her on social media: Facebook, Twitter, and Instagram. Check out her foundational self-defense video called “Don’t Mess with Mama”. 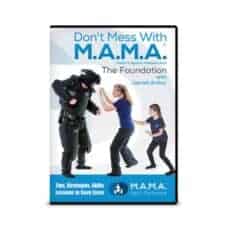 Get Kids Off Screen Time: Favorite Audiobooks for Kids Ages 8 – 12