This post may contain affiliate links.
Facebook
Twitter
If you have a child or student who is learning to read, you’ll be on the lookout for the BEST books to keep them interested, excited, and growing.
There are several new Acorn books from Scholastic that will transition children from early readers into the easiest “chapter books” which are illustrated stories with easy text.
As far as finding books right for your child, go to the book’s preview, if it exists, and see what the text size looks like and how much text is on the page.
If the story looks interesting, get it. You can always read it to them if it’s too hard.

The books in this section have only a few sentences per page. 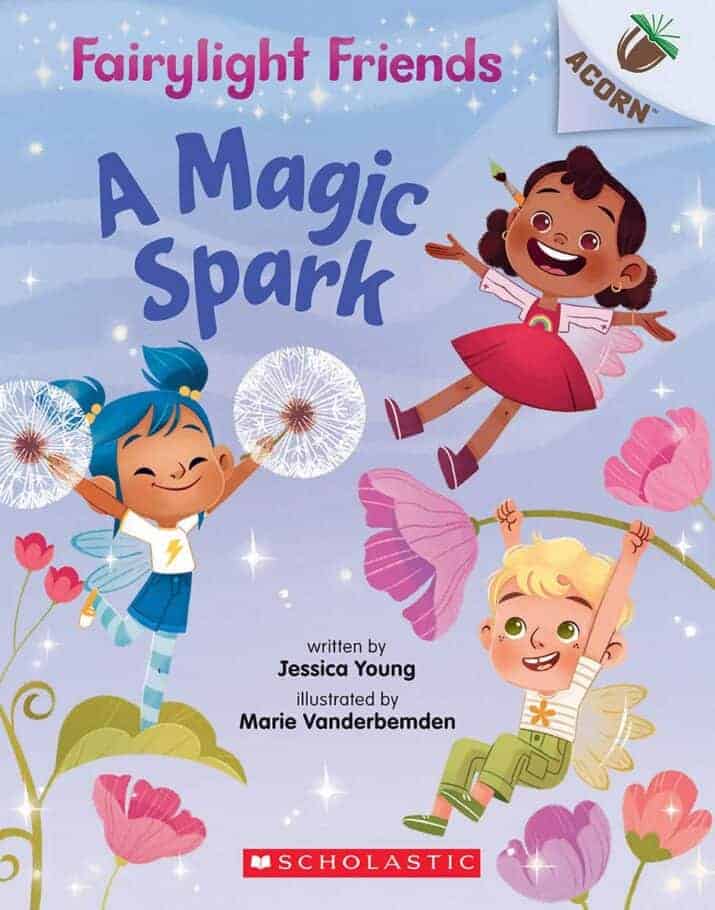 A Magic Spark (An Acorn Book) by Jessica Young, illustrated by Marie Vanderbemden
Readers who love magic and fairies will love these short stories about three fairies who become friends on the first day of fairy school and become friends. The new friends take a field trip to Crystal Pool to see what kind of magic they each have. After they discover their special talents, they have more magic-filled adventures like baking a cake, and planning a party. 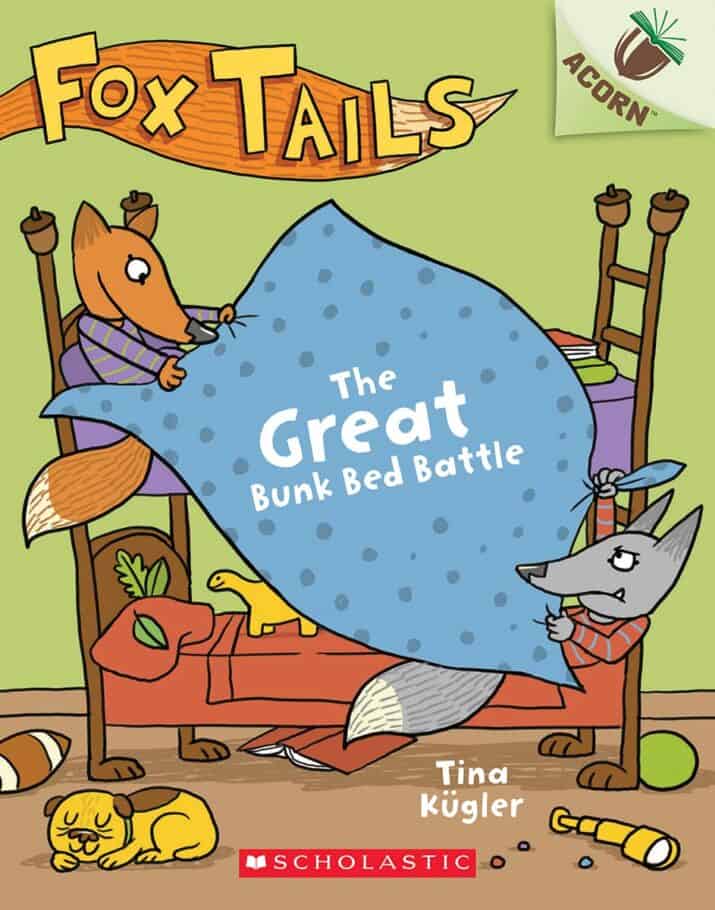 The Great Bunk Bed Battle (An Acorn Book) by Tina Kugler
When fox siblings Fritz and Franny go to bed, they don’t actually go to sleep. They compare which bunk bed is best and imagine adventures through a forest with a castle, a moat and a boat, a submarine, and a volcano on their beds. Simple text in speech bubbles and a relatable topic makes this a sure-fire hit with new readers. 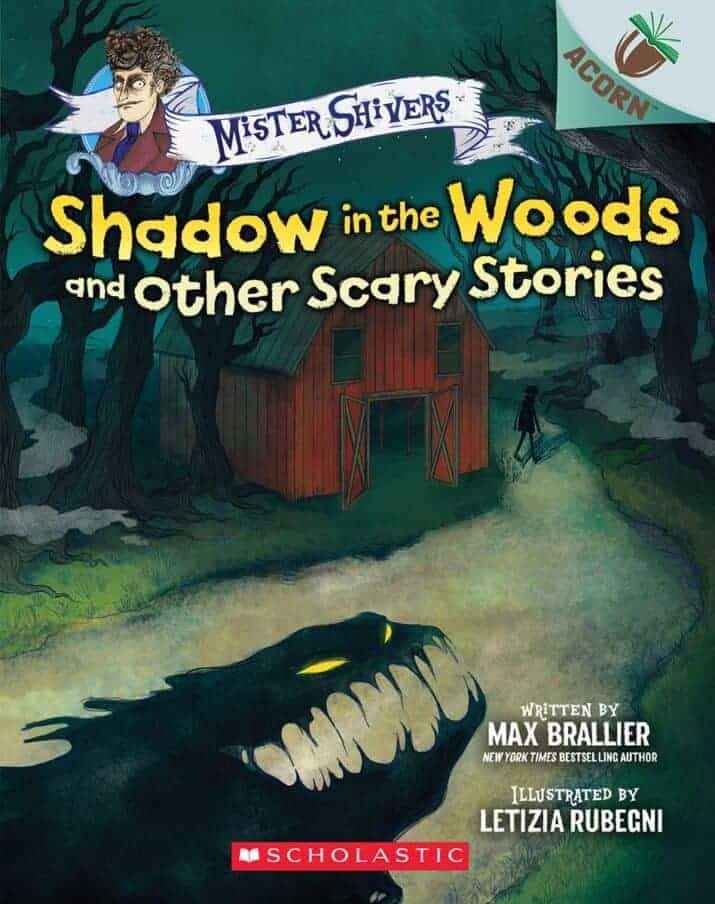 Mister Shivers Shadow in the Woods and Other Scary Stories (An Acorn Book) by Max Brallier
Yes, some kids like scary stories. (I’m surprised because I don’t.) But if you know a child who does, this book with easy-to-read text and short, illustrated stories will become a much-loved favorite. 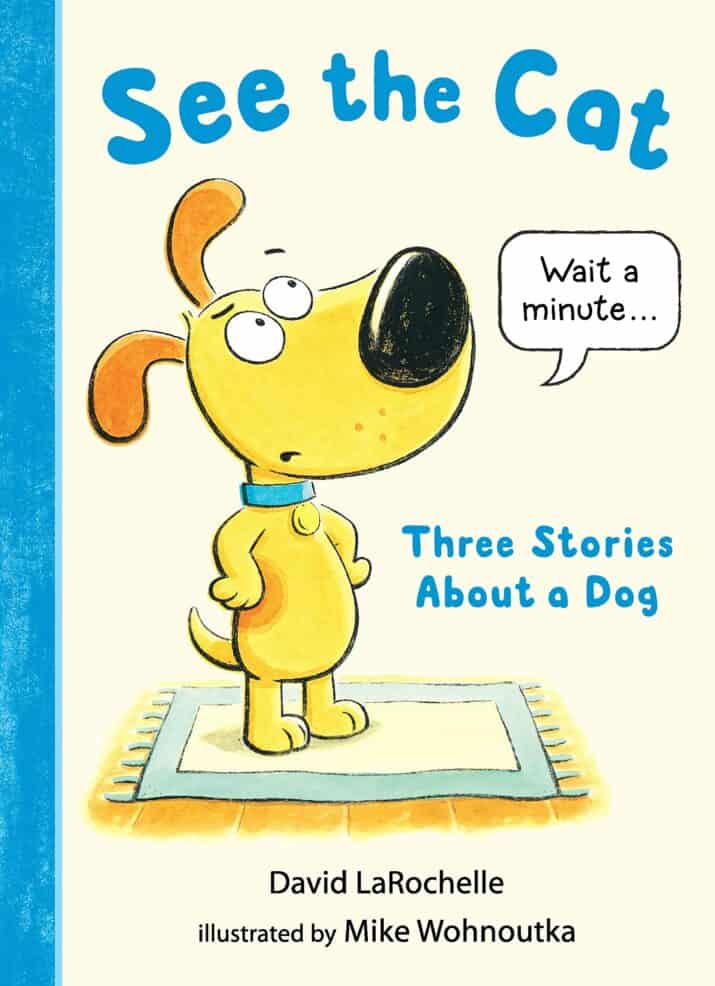 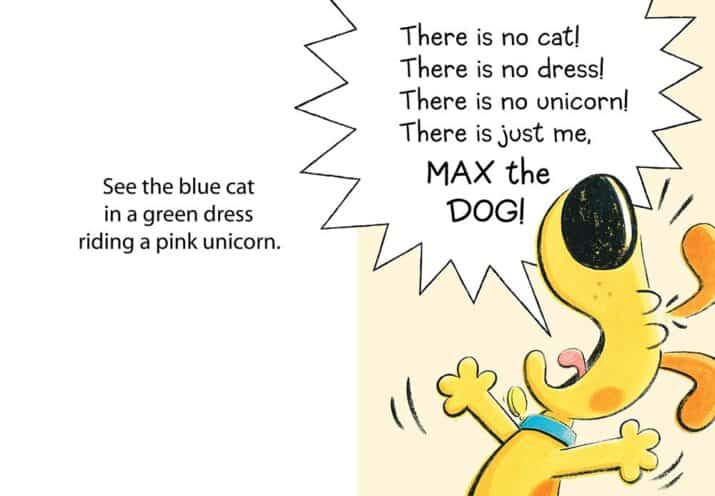 See the Cat: Three Stories About a Dog by David LaRochelle, illustrated by Mike Wohnoutka
Kids who like silly stories will want to read this story again and again! A playful remake of the Dick and Jane stories— with a narrator and dog who argue about the story. Because there is no “blue cat in a green dress” argues the dog! Until…a blue cat in a green dress appears! The repetition of words and similar short text structure makes this a fun new choice for beginning readers. 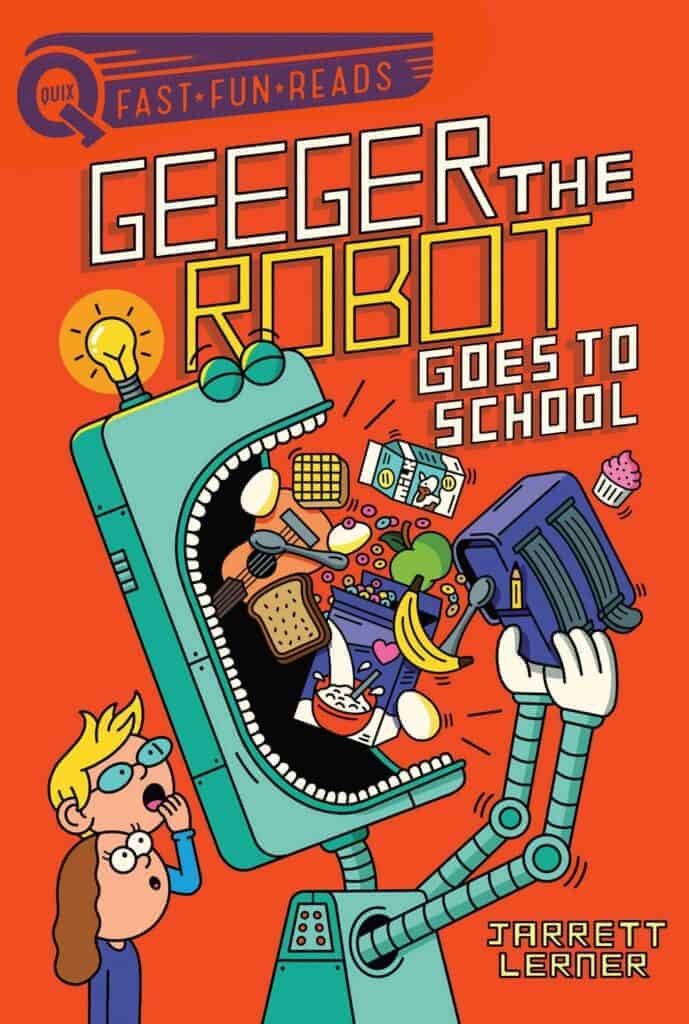 Geeger the Robot Goes to School by Jarret Lerner
Geeger the robot eats everything. When he starts attending school, this is a problem and he makes all sorts of mistakes. Fortunately, his kind teachers help him learn what to eat and when to eat– which helps him make new friends. Cute and silly. Sure to be a new favorite with growing readers. 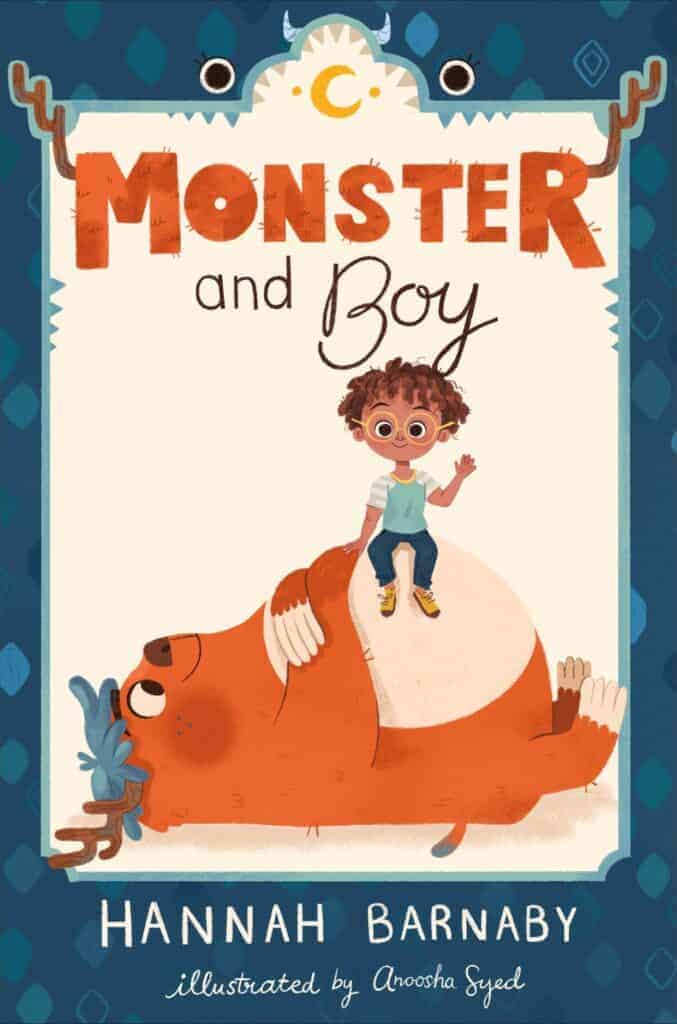 Monster and Boy by Hannah Barnaby
A charming story told by a narrator who speaks directly to you, the reader, about an unlikely friendship between a monster and a boy. The monster wants the boy, whose bed he sleeps under, to know that he’s real. But, the monster eats the boy to make sure he doesn’t scream. And things get complicated. Nevertheless, the two become friends and, with the advice of the boy’s little sister, get the boy back to his regular size outside of the monster’s tummy. 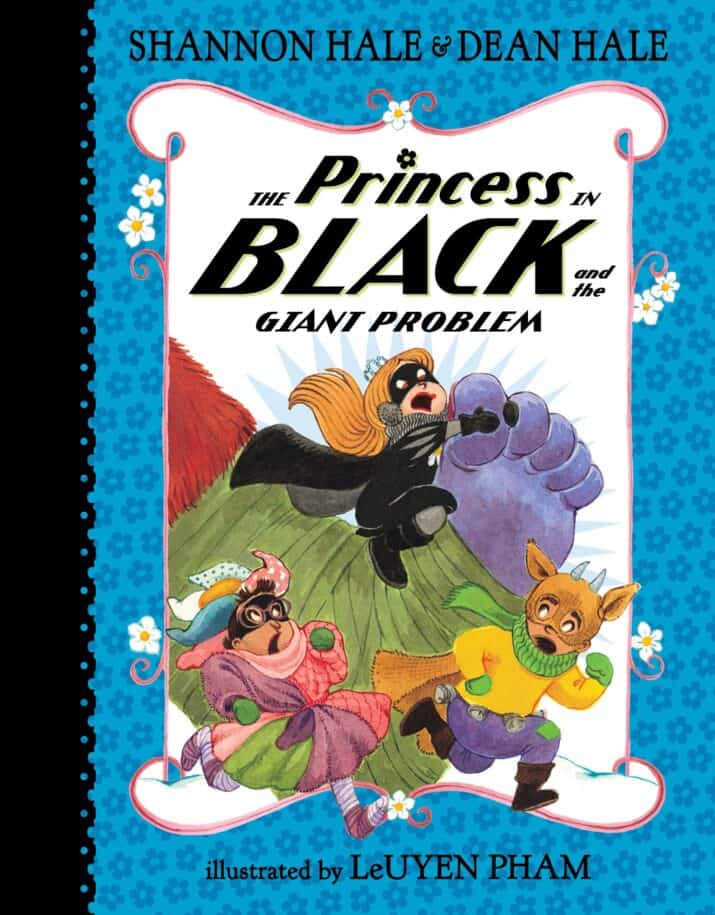 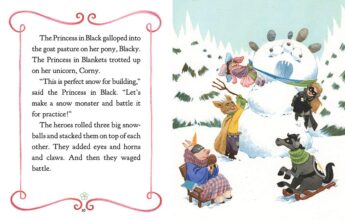 The Princess in Black Giant Problem by Shannon Hale and Dean Hale, illustrated by LeUyen Pham
Princess Magnolia and the Princess in Black are having a playdate when a giant arrives and starts stomping on things, yelling, “SQUASHY.” They call the other princesses for help. Together, the princesses and their pets try to stop the giant. It turns out that he’s a baby giant and his mom comes to get him.
*More Book Recommendations for Readers Who Love Princess in Black Books. 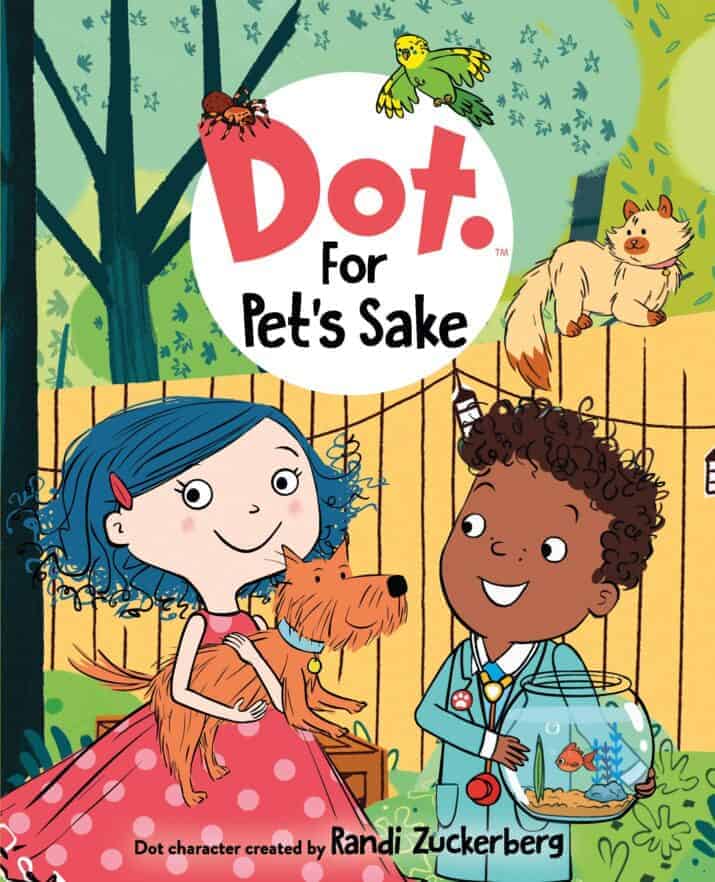 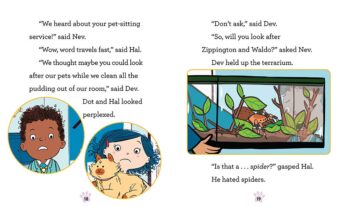 Dot: For Pet’s Sake based on the character created by Randi Zuckerberg
Friends bring one pet after another and Dot happily watches them all with the help of her Pet Pall app and her friend Hal. But soon, mayhem ensues and the pets escape. This is an adorable and funny story for kids who love animals. 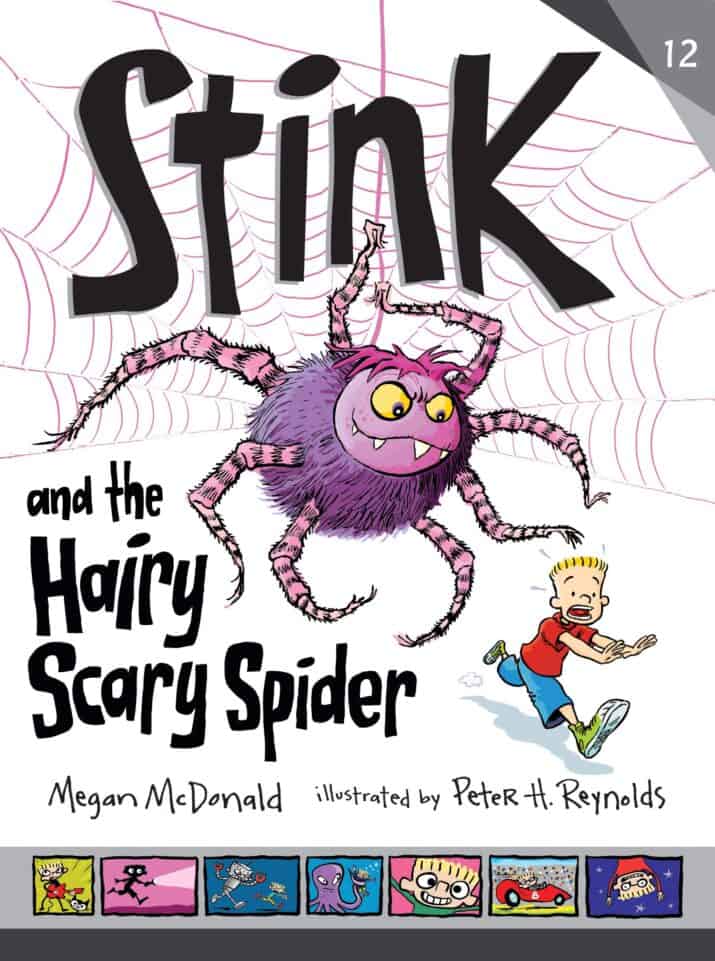 Stink and the Hairy Scary Spider by Megan McDonald, illustrated by Peter H. Reynolds
12th in the series, this book is all about Stink facing his fear of spiders. When he finds a pink spider, Stink freaks out! Luckily, his friends and his sister help him learn about tarantulas…and he wants to keep the pink-toed tarantula as a pet but instead, he finds the owner and returns her. Well-written and engaging. 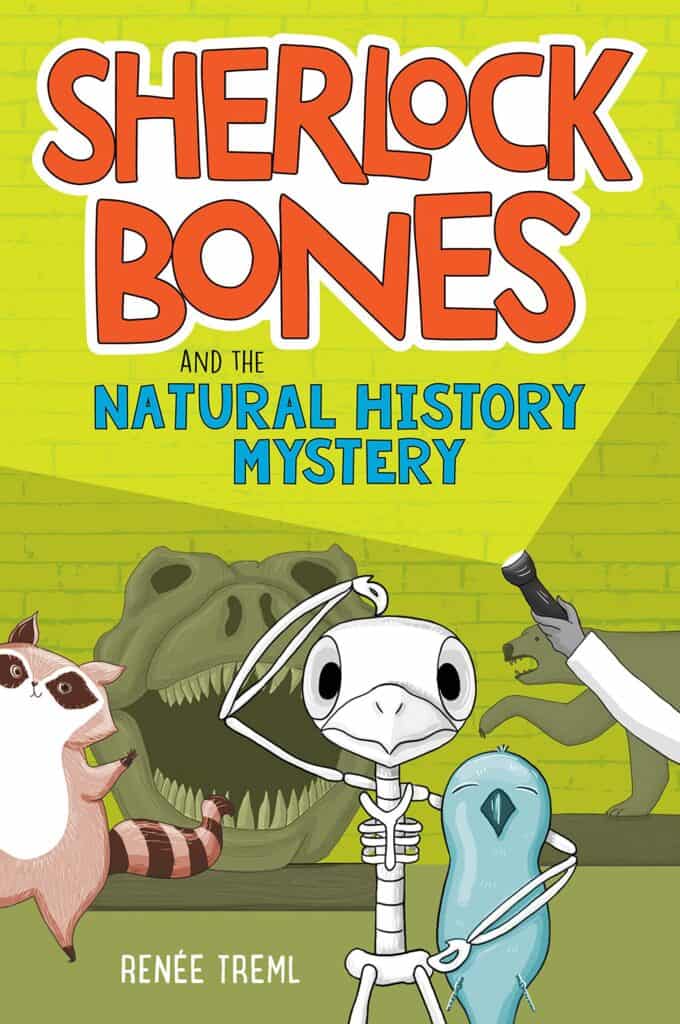 Sherlock Bones and the Natural History Mystery by Renee Treml
Dialogue-only, this graphic novel is narrated by the skeleton of a frogmouth whose sidekick is a stuffed parrot named Watts. A raccoon named Grace arrives just after the Royal Blue Diamond goes missing. Together, they’ll all work to solve the mystery so the museum doesn’t close. I didn’t love the small text size and that there was no transitioning text. It’s a decent mystery but too long. 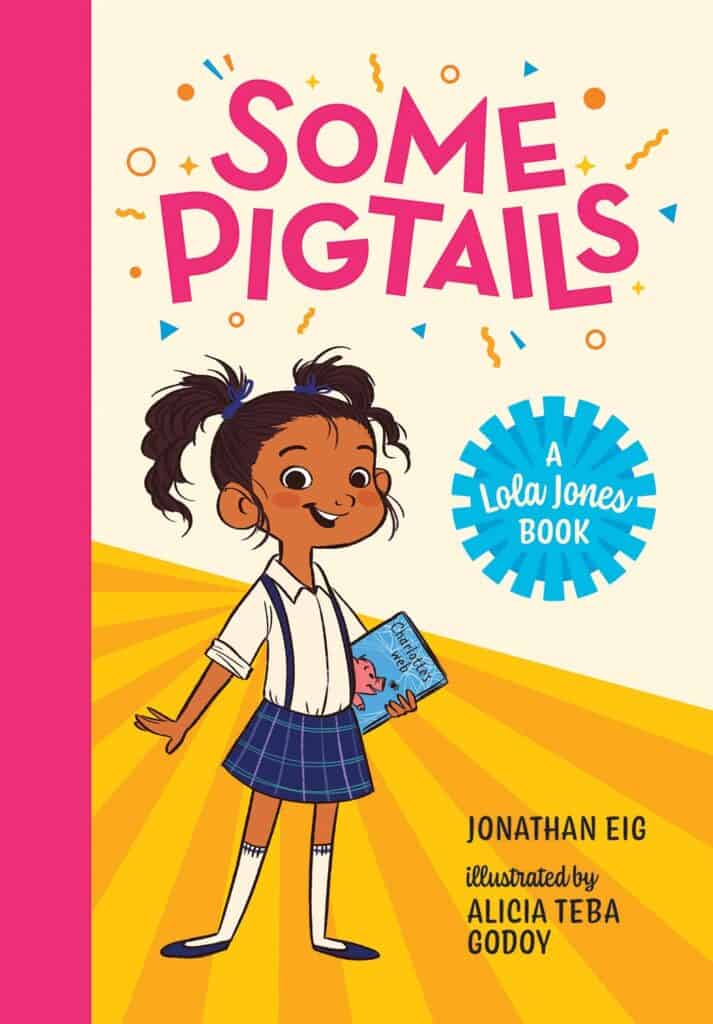 Some Pigtails by Jonathan Eig, illustrated by Alicia Teba Godoy
Lola uses a literary character role model to advocate and persist when she feels something is unfair. Lola wants pigtails and her mom is too busy so she asks her grampa — who makes red, white, and blue handlebar-like pigtails. She loves them! In fact, she decides to keep trying unusual hairstyles with grampa. But, that all stops when her school principal bans any unusual hairstyles. Lola thinks of how in Charlotte’s Web, Charlotte the spider uses words to try to change the situation. So first, she talks to the principal. That doesn’t work so next, she organizes the students to start distraction days. Those don’t work either. Finally, she tries a petition which leads to a compromise. A fantastic first book in the series! 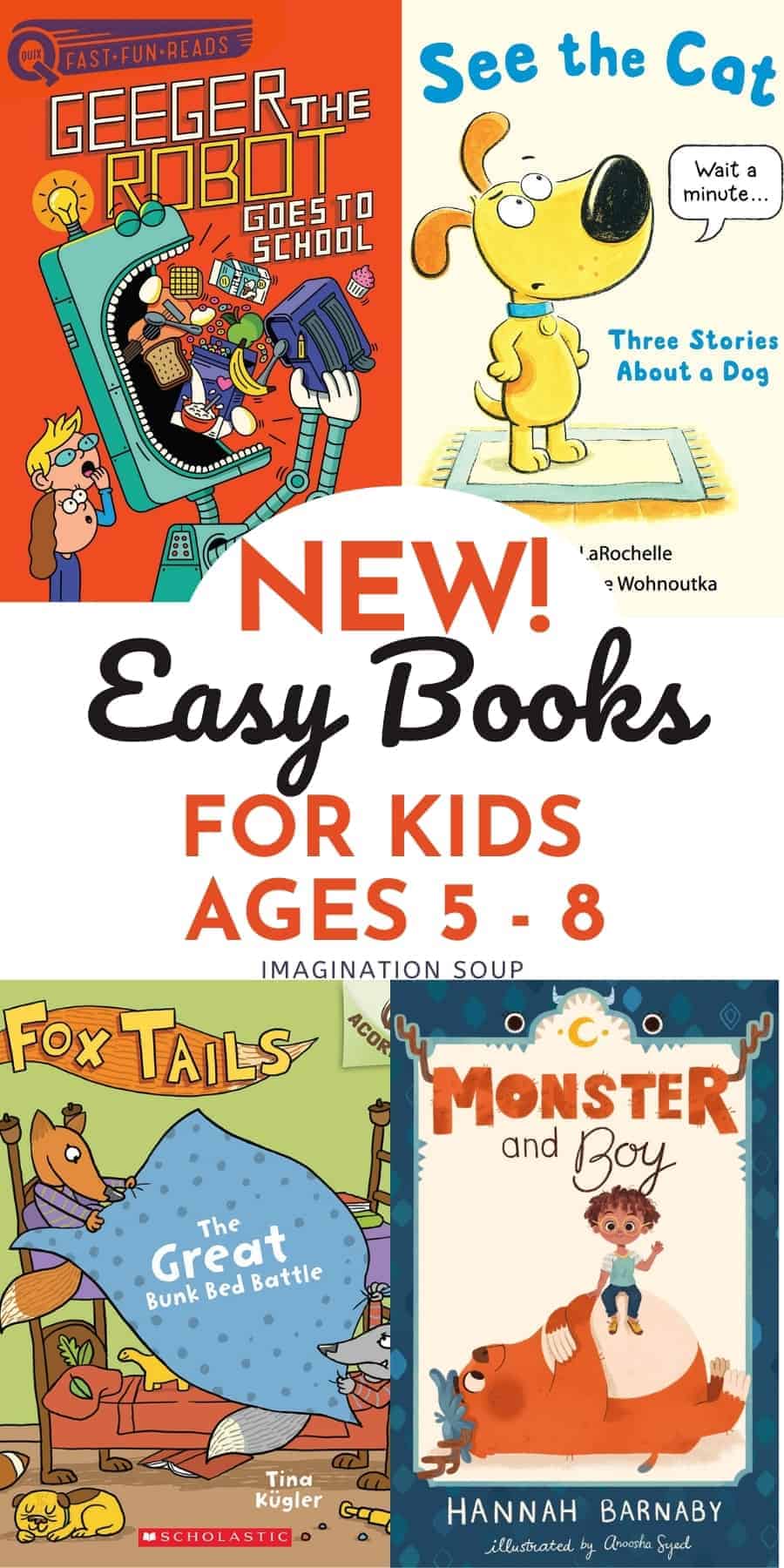 Best Easy Readers for 5- and 6-Year-Olds