In a strange coincidence, these five early 2019 middle-grade novels share a common thread — they’ll probably be the most beautiful, tender, and emotional stories you’ll read all year. Or even for many years. Not only that, all five of these books include a main character with special needs — intellectual differences as well as physical. Which is incredible and adds a rich depth to each book. Not to mention, it is really affirming to see more differences in children’s literature. Thank you, authors and publishers.
Get your tissues ready because while these are SO good and SO poignant, at least four of the five will make you cry. But you’ll be glad you read them. (You’re welcome in advance.)

Beautiful, Emotional Middle-Grade Books That Probably Will Make You Cry (2019)

Extraordinary Birds by Sandy Stark-McGinnis (4/30/19)
Don’t miss this tender, beautiful, redemptive story. December is a foster child who believes with all her heart that she will soon grow wings and fly. Her hope began with the book her mother left her, a book about birds with an inscription, “In flight is where you’ll find me.” Now she’s in yet another foster home but with a woman named Eleanor who she helps at the wildlife rescue center. At her new school, December makes friends with an outgoing, kind girl named Cheryllynn who is somewhat of an outcast because, from what readers may or may not infer, she used to be a boy. (This is only from a few clues and I suspect that readers who aren’t savvy about this topic will miss it.) After another jump off a high branch in a tree and a trip to the hospital, December finally accepts the truth about everything including her mother, being a bird, and the future. I cried so hard at this ending — because her hard-earned realizations shift her future, allowing for love and happiness.

Planet Earth is Blue by Nicole Panteleakos (5/15/19)
What a beautiful, heartbreaking, wonderful, transformative book! Nova is both autistic and nonverbal. In this story, she writes letters (narrated in her mind) to her “runaway” big sister, Bridget. We learn that Bridget always knew how to calm Nova down with storytelling and talking about anything space related. Flashbacks show their history in the closet hiding from an abusive mother as well as time together with previous foster families. Nova clings to Bridget’s promise that Bridget will come back in time for the Challenger launch. But the launch happens and Bridget never arrives. This prompts Nova to face the truth about her sister. And that truth will make you cry like a baby. At least it did for me!! I’m in awe of the author’s beautiful, gifted storytelling. I love this book SO much. Added to: Books with Characters on the Autism Spectrum and The Best Middle Grade Chapter Books & Graphic Novels of 2019.

The Bridge Home by Padma Venkatraman
This is the story of sisters and brothers and resiliency and courage. Set in India, Viji writes this story as letters to you, her little sister Rukku who has intellectual disabilities. Viji tells how the two of them ran away from an abusive father to the big city where they met two friendly brothers and lived with them under a bridge, scrabbling to survive by collecting trash. Their lives are hard but made easier by the two boys, their new “brothers.” When Rukku gets a terrible cough and fever, so does one of the brothers. And what happens next almost destroys Viji. She wonders how prayers and faith can coexist with misery and pain. Ultimately, it is the kindness of her new “family” that helps her to see more than misery in the world. It’s an honest, eye-opening story that reveals the plight of many homeless children in India and yet, finds a way to be hopeful, too.
Added to The Best Middle Grade Chapter Books & Graphic Novels of 2019.

Lenny’s Book of Everything by Karen Foxlee (4/16/19)
To be perfectly honest, I am still sort of mad at Karen Foxlee for making me so, so sad. (But she doesn’t keep us there, I’m just being a baby…) Lenny’s little brother Davey is the sweetest and loudest five-year-old. Lenny loves and hates him just like any sister would. Everyone else loves him. Now that he’s in kindergarten, the school nurse urges their in-denial mama to get a second opinion about Davey’s excessive growth. Because Davey is huge. Foxlee clocks this growth in months and inches and encyclopedias volumes. The kids love the information in the encyclopedias which they pour over one volume at a time just like they arrive in the mail. The forboding pacing is a bit too much at times–we wait and wait for something to happen. Which it does. Davey has tumors on his pituitary gland which is why he is growing without stopping. When the ending comes, I regret wishing for it. It’s is a devastating ending that made me burst into tears. Maybe because I just had a death in my own family last week. And yet, it reminded me how just knowing someone as special as Davey, for any length of time, is a blessing. Read it. Even though it’s sad. It’s really a sweet message.

Caterpillar Summer by Gillian McDunn (4/2/19)
McDunn beautifully weaves an emotion-filled, coming-of-age story with a strong female main character named Cat who you will adore. Cat is a protective big sister for her special needs brother who often has meltdowns and runs away but she’s ready to be more — she’s ready to have her own life and for her mom to see that. Cat finds the opportunity when her children’s book author-illustrator mom leaves she and her brother at their estranged grandparents’ house for the summer. There, Cat develops a special relationship with her grandparents, helps heal the rift between her grandfather and her mother, makes a good friend, and learns how to fish so can enter the local kids fishing contest. It’s an absolutely lovely story that addresses growing up, race, special needs, family, and reconciliation. (And this one probably won’t make you cry.)

My question to you is this — which will you read first!? 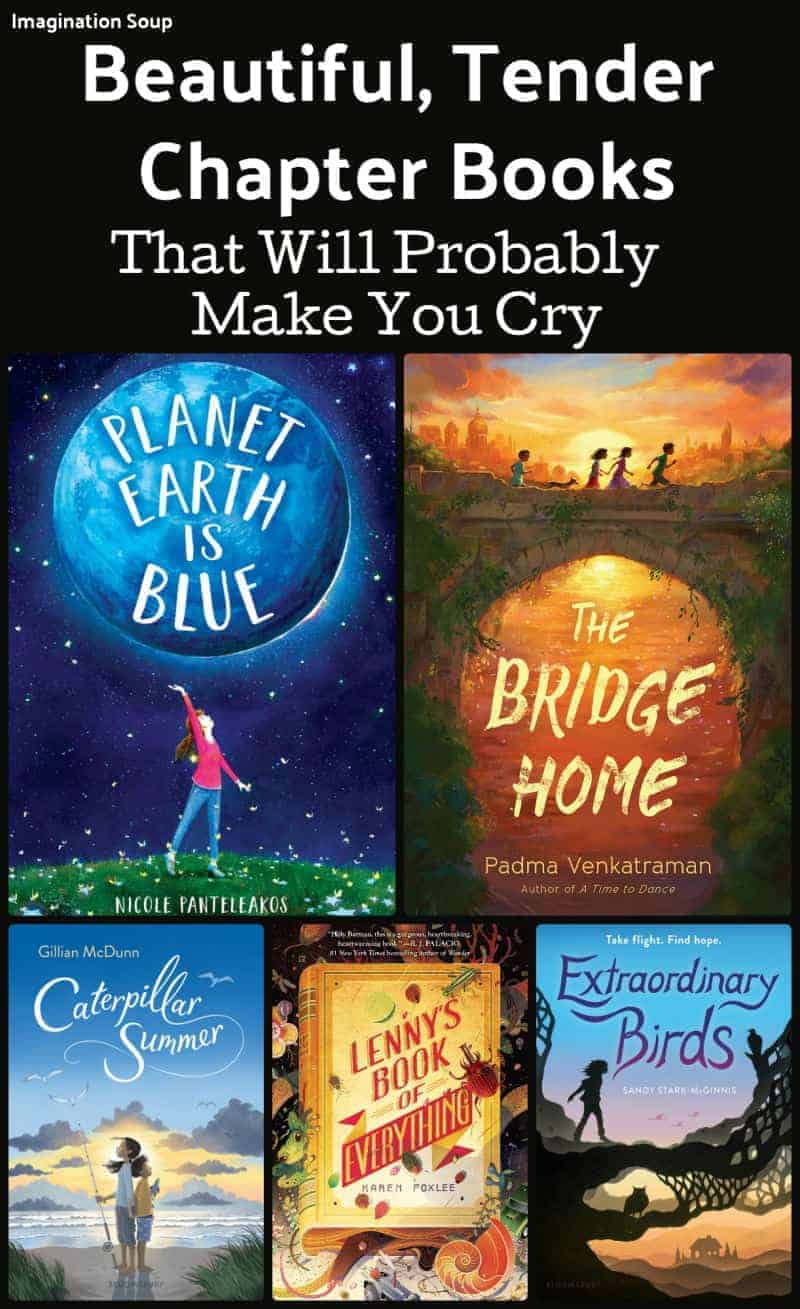 Books with Character on the Autism Spectrum

Stories About Growing Up & Being Yourself

Picture Books About Grief and Loss