With the upcoming elections, I figured the best thing to teach my kids about the basics of voting, leadership qualities, and the job of a President would be to start with something fun and relatable. Then they’d have more background knowledge to better understand the national Presidential elections.

Most importantly, I want my kids to know that they have an amazing right as a citizen of the United States — the right to vote and pick the leadership governing our country. Not only is it a right, I want them to know it’s a responsibility.

So, we set up elections for our pumpkins to learn the basics of an election process. Vocabulary words are in bold. 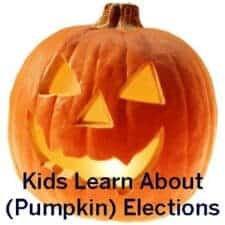 1. Pick 2-3 candidates to run for President of your family.
We used pumpkins. You could use your pets, dolls, or stuffed animals.

2. The candidates need a platform— something that they believe in strongly. Depending on their ages, you make up silly and simple platforms, or have your kids make them up. (Of course, feel free to be more realistic or complex.) Our pumpkins’ platforms are:

3.  Now, discuss the job of President for the family. Something like:

4. Divide up into supporters for each candidate. Make campaign signs, buttons, and/ or commercials.

1. Talk about the 2 major political parties, Republican and Democrat, and each party’s candidates as well as the ballot issues.

2. Learn about each candidate’s platform. Discuss as related to your family’s values.

Activity: Talk about television commercials, analyzing the differences between the positive and negative ads. 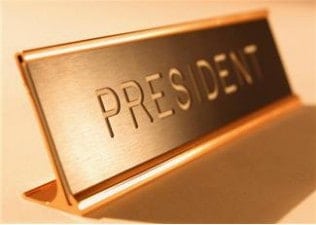 3. Learn what the President’s job is. 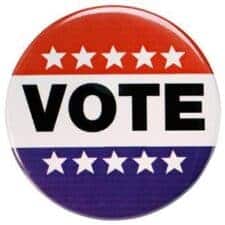 I hope this election activity helps you as it did for my kids — at least get the gist of the system in this country and electing a good leader.

What are your doing already in your family to learn about the elections?