Skip to content
Share
Pin
Tweet
Check out what new in middle grade fantasy and science fiction books this winter (2017)! If I had to pick a favorite, it would be the Metropolitans. Which would your readers enjoy best?

If the Magic Fits (100 Dresses) by Susan Maupin Schmid FANTASY (ages 8 – 12)
Darling Dimple is thrilled to be moved from a kitchen scrubber to an upstairs dress presser for the princess. One day, she discovers a special closet of enchanted dresses. When Darling suspects a plot against the princess she uses dresses magic to help her investigate. Who is trying to free the dragons? Who wants to take over the kingdom? This lovable heroine and charming magical plot will enchant readers. Also, the reading level is on the easier side, so this book is best for around 8 – 9 year olds. 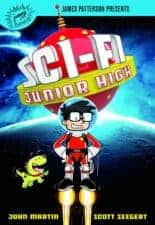 Sci-Fi Junior High by John Martin and Scott Seegert SCI-FI (ages 8 – 12)
Kelvin Klosmo is the son of genius scientist parents. He’s just moved to the Galactic Science Hub’s Sci-Fi Junior High where he’s desperately trying to keep up the pretend genius facade. Throw in some funny alien friends, a little sister obsessed with her stuffed animal, a crazy evil mastermind who accidentally mind transfers to said stuffed animal, a gigantic robot, the possibility of world destruction, and you can almost imagine the entertaining misadventures in Sci-Fi Junior High. Almost. (That’s why you’ve got to just read it!) Enter book giveaway here. 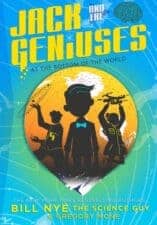 Jack and the Geniuses at the Bottom of the World by Bill Nye and Gregory Mone STEM (ages 8 – 12)
Jack and his genius siblings, Ava and Matt, are orphans who start working for a scientist / inventor named Dr. Witherspoon. The three accompany their inventor boss to the Arctic for a science competition where they discover one of the researchers has gone missing. Is it because she’s made the biggest discovery of her life and another scientist is jealous? This isn’t really a sci-fi book but IS a fun, science-filled STEM adventure great for kids who love mysteries and technology. (And did you notice it’s co-written by Bill Nye, the Science Guy?)

The Mesmerist by Ronald L. Smith FANTASY (ages 8 – 12)
After having a sinister vision, 13-year old Jessamine Grace discovers the truth about her parents and their former professions as well as learns she has the ability to speak to the dead. She joins a motley group of kids who also have otherworldly powers to fight against an evil force. Set in Victorian London, this is a classic kid-power plot of good vs. evil with fantastical abilities that will make things interesting to readers.

The Metropolitans by Carol Goodman FANTASY (ages 8 – 12)
I thoroughly enjoyed this fantasy – historical adventure and can’t wait for more from this series. Four kids join together to find the well-hidden clues in the Metropolitan Museum of Art to prevent a Nazi attack. As they search for the Arthurian document and try to solve the riddles, each child feels a kinship with one of the famous Arthurian characters: King Arthur, Lancelot, Guinevere, and Morgaine. But who else is involved? When the sinister museum security director and her evil son capture them, it looks like there are more Arthurian legends still around with evil intentions.
These titles have been added to the following master lists:
Science Fiction Books for Kids
Fantasy Books for Kids
Books for 8- year olds
Books for 9- year olds
Books for 10- year olds
Book for 11 year olds