Are your kids looking for a good chapter book set in an Asian country? My daughter wanted to read a book set in a different country so I’m making new book middle grade lists. This first one is books that take place in Asia,  countries including China, Mongolia, Nepal, Hong Kong, Korea, Taiwan, and Japan.

Not all Asian countries are represented here. I’ll continue to add to this list as I learn of new books. Please share any you know and recommend! 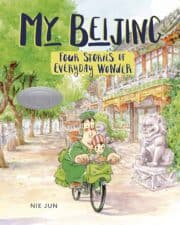 My Beijing: Four Stories of Everyday Wonder by Nie Jun (ages 7- 10)
Four sweet stories of Yu’er and her grandpa show their warm bond and Yu’er’s adventures around their Beijing neighborhood. The first story is about Yu’er’s desire to compete in the Special Olympics. Other stories include defending herself from bullies with the help of a new friend as well as a magical old mailbox that transports Yu’er through time. This is a beautifully illustrated book of stories that feels nostalgic and heartwarming.

Secrets of the Terra-Cotta Soldier by Ying Chang Compestine and Vinson Compestine (ages 8 – 12)
If your kids aren’t interested in Chinese history, they will be after reading this novel. Ming lives in rural communist China with his father, who finds artifacts for the museum. A discovered terra-cotta soldier who comes to life and befriends Ming. They must work together to protect the soldiers and Emperor Qin’s tomb. I like how the authors wove in historical photos and information. It sounds like a silly premise for a story but it worked — and was very good. 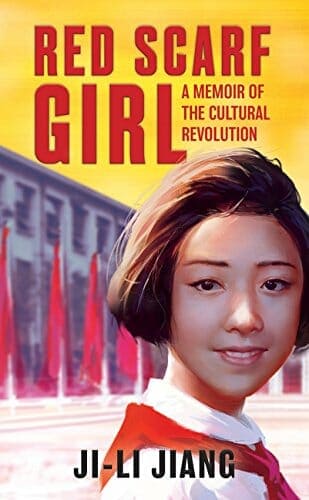 Red Scarf Girl: A Memoir of the Cultural Revolution by Ji-li Jiang (ages 11+)
Recognized for excellence in writing, this true story of 12-year-old Ji-li’s life in the 1960s shows readers the personal destruction that China’s leader, Mao Ze-dong, inflicted on families with his Cultural Revolution. Ji-li believed in China’s Communist party until her family was persecuted and her father imprisoned. She struggles to make sense of her new reality. Soon, she’ll be forced to choose between her family and her country. 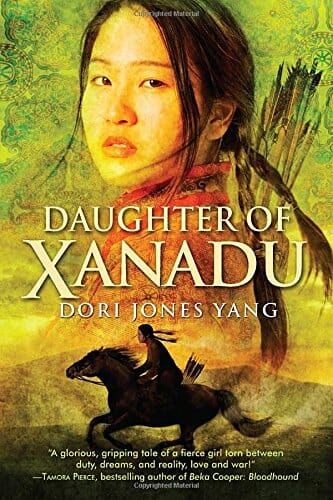 Daughter of Xanadu by Dori Jones Yang (ages 13+)
Historical fiction with adventure and romance in a book set in Mongolia and China. Princess Emmajin is the grand-daughter of Kubilai Khan. She’s a proud warrior who wants to prove herself as a soldier. She’s asked to befriend the charming (but not warrior-like) Marco Polo to whom she grows close. This book captures the brutality of life in 13-century Mongolia. 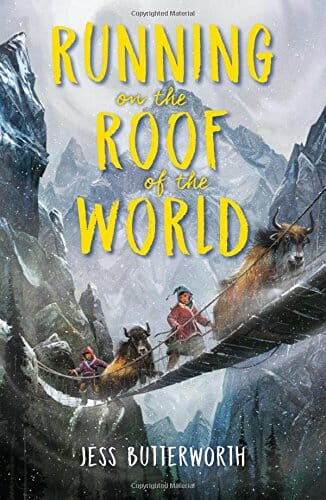 Running on the Roof of the World by Jess Butterworth
When a monk sets himself on fire to protest the Chinese occupation of his country, the Wujing Soldiers take Tash’s parents away. Tash and her friend Sam decide it’s safer to leave for India to find the Dali Lama where they’ll share her father’s rebel information. They sneak out of Tibet over the harrowing mountain pass, hiding from soldiers and even locals who report to soldiers.

Sold by Patricia McCormick (ages 13+)
This book is hard to read but also hard to put down. It’s the story of a young girl whose stepfather sells her into prostitution. She’s taken from Nepal to India where she’s forced into a new, brutal life that she will never escape. When an American arrives who promises the girls’ rescue, Lakshmi dares to hope for a better life. Her story resonates with honesty and heartbreak.

Sherlock Sam and the Ghostly Moans in Fort Canning by A.J. Low (ages 7 – 10)
Set in Singapore, Sherlock Sam and his friends use their brains to solve mysteries. In this case, they’re determined to discover the cause of the ghostly sounds from an abandoned military fort. Could it be a ghost? Their adventures are funny and exciting, this is a well-written chapter book in a new series. (See also: Sherlock Sam and the Missing Heirloom in Katong.) 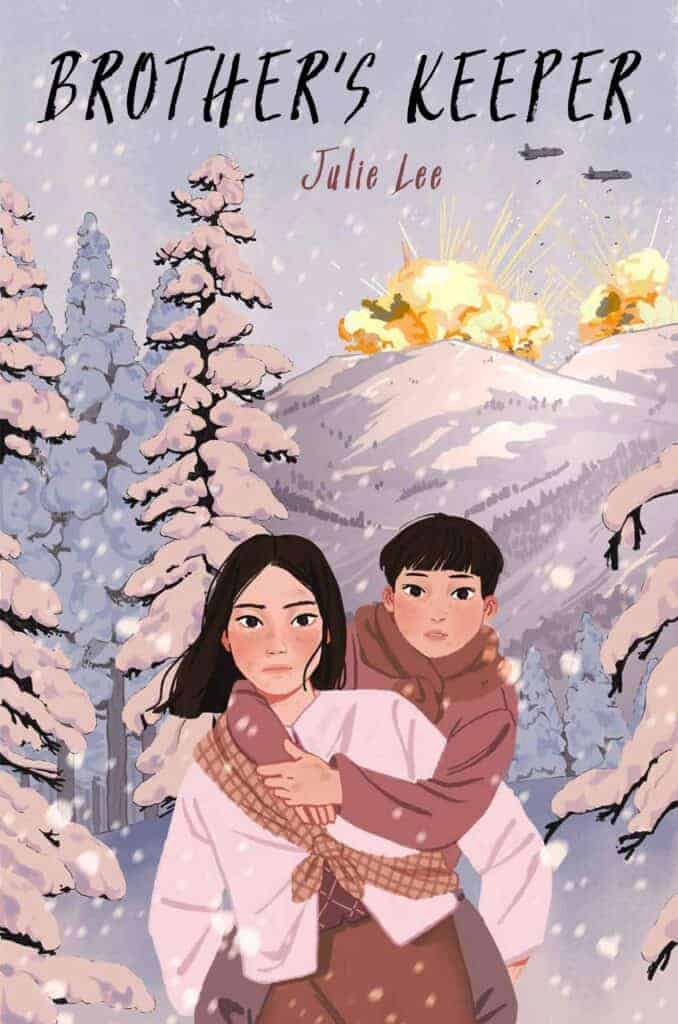 Brother’s Keeper by Julie Lee (ages 8 – 12)
Based on her grandmother’s escape from North Korea, this historical fiction story is a powerful read that captures the fearful culture of North Korea, the marginalization of females, and the bond between siblings. As war erupts between North and South Korea, Sora and her family decide to flee from North Korea while they still have a chance. But she and her little brother are separated from their family. As they continue south, they experience death, kidnapping, starvation, killings, winter’s brutal cold with the Red Army marching right behind them. Even worse, her brother, Youngsoo, is getting sicker and sicker. The siblings’ journey is interspersed with memories of her childhood including her mother’s disdain and criticism and how she was forced to leave school to care for her little brothers. Amazingly, the two make it to the south where they’re reunited with their family but it’s a bittersweet ending. 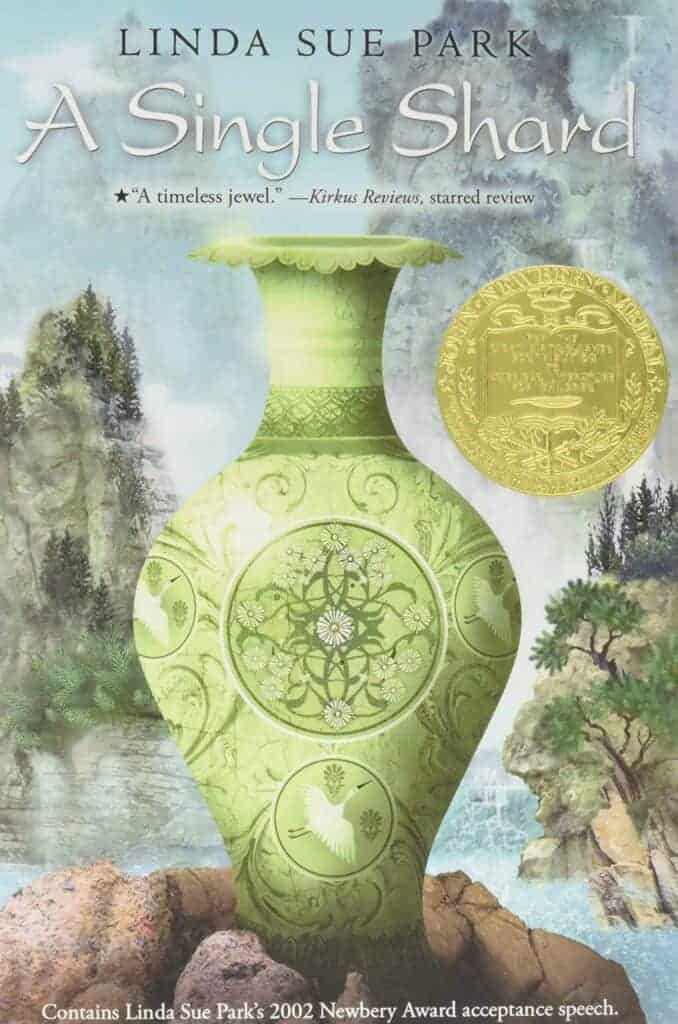 A Single Shard by Linda Sue Park  (ages 8 – 12)
A Newbery medal winner! The setting is 12-century Korea. Orphaned and homeless, 13-year-old Tree-ear years to become a potter like Min. But when Min takes Tree-ear as his helper, Tree-ear is discouraged at his master’s temper and the back-breaking work. He decides he’ll prove his worthiness by getting a royal commission. He’ll make a journey filled with challenges and arrive at his destination with only a single shard to showcase Min’s pottery. 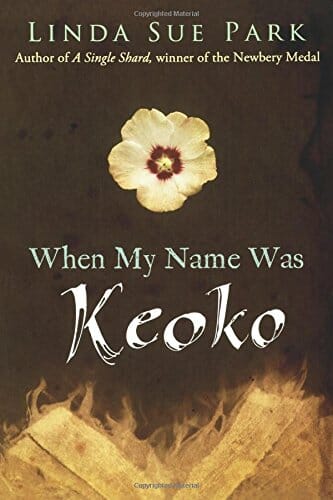 When My Name Was Keoko by Linda Sue Park  (ages 8 – 12)
In a time when Korea is occupied by Japan, the Korean language, their folktales, all Korean culture is forbidden. World War II arrives, along with the expectation that Koreans will fight for Japan. Sun-hee is shocked that her brother, Tae-yul, enlists to misdirect the soldier’s interest in his uncle. The plot is filled with themes of injustice, resistance, courage, and family during a difficult historical time period of occupation. 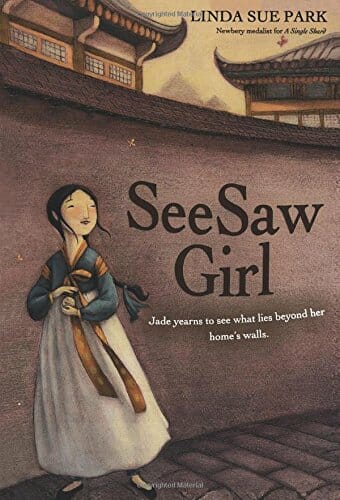 Seesaw Girl by Linda Sue Park, illustrated by Mou-Sien Tseng and Jean Tseng  (ages 8 – 12)
Set in 17th century Korea, Jade loves listening to her brother’s stories about the walls outside her home. As a well-to-do girl, she cannot leave her walled home until she is married. 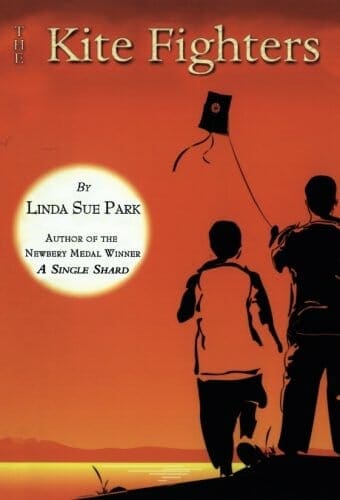 The Kite Fighters by Linda Sue Park  (ages 8 – 12)
Brothers, Kee-sup and Young-sup, love kites in this 15th-century story set in Korea. Korea’s king chooses Young-sup to fly the real kite in a competition. Young-sup father wants Kee-sup, the older son, to trade places even though he’s not as strong of a kite flyer. What will the brothers do? 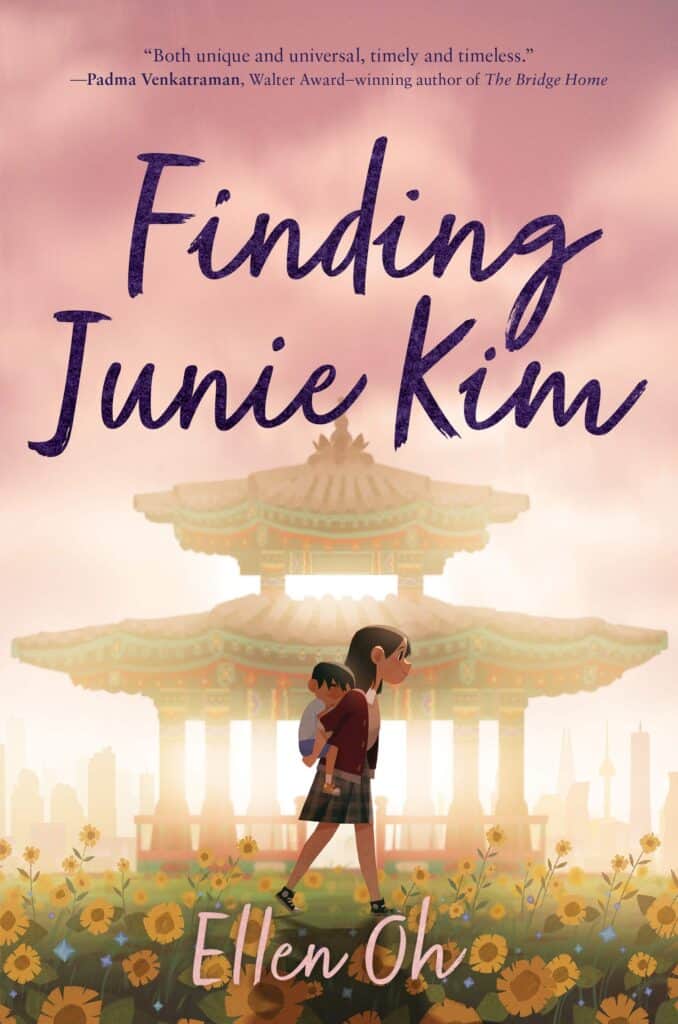 Finding Junie Kim by Ellen Oh (ages 10+)
This incredible book packs a big punch because it sensitively and truthfully addresses depression, racism, family relationships, friendship, and strength to stand up against injustice as well as recounts the Korean War from the perspectives of two children, Junie’s grandparents. In the present day, Junie faces bullying and microaggressions, then her friends drop her for being too negative. Her sadness and fatigue lead to suicidal thoughts then medication and therapy. Even more helpful are Junie’s interviews with her grandparents, immigrants from South Korea who faced their war-filled childhood hardships with determination and courage. Her grandpa’s story helps Junie find her strength, helping her see that silence against injustice is complicity and that being a good friend is important. Moving, important, and beautiful. *SENSITIVE READERS: This book includes suicidal thoughts, the violence of war, and a couple of bad words. 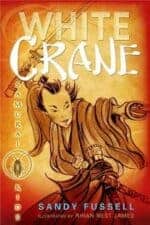 White Crane (Samurai Kids) by Sandy Russell  (ages 8 – 12)
Niya lives in feudal Japan. He wants to be a samurai yet that won’t be easy– not when he only has one leg. He’s determined to achieve his goal and is finally accepted as a trainee at the Cockroach Rry where he’ll prepare to fight in the Trainee Samurai Games.

The Young Samurai by Chris Bradford
The only survivor on a British ship attacked by ninjas, 12-year old Jack must adapt to the Japanese culture of his new home with a samurai warrior. He trains to fight as a warrior, develops a strong friendship with Akiko, and experiences dangerous adventures that often include his father’s most prized possession.
If you like this try The Brotherband Chronicles by John Flanagan.

Samurai Shortstop by Alan Gratz  (ages 8 – 12)
Toyo lives at boarding school in 1890 Japan. He loves the new game of besuboru (baseball) even though his father, a traditional man, despite the Western game’s influence. Toyo wants to find a way to honor and understand his heritage and play the game he loves.

Heart of the Samurai by Margi Preus  (ages 8 – 12)
I loved this historical fiction book about a 14-year-old boy Japanese boy named Manjiro who is shipwrecked and taken on a ship to the United States. Eventually, he returns to Japan where he is imprisoned.

The Bamboo Sword by Margi Preus  (ages 8 – 12)
Set in 1853 Japan, Yoshi is a boy who works for Manjiro during the tense, political negotiations regarding Japan opening it’s borders for the first time in 200 years. 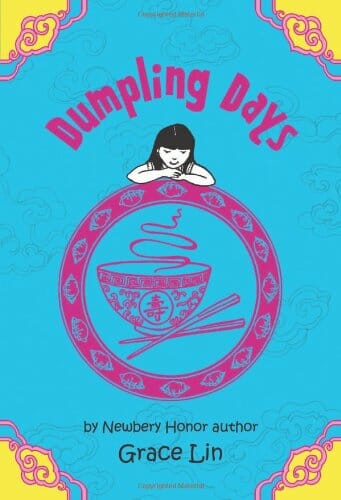 Dumpling Days by Grace Lin (ages 8 – 12)
Pacy’s family visits Taiwan for her grandmother’s 60th birthday. It’s her first time visiting and she struggles with the language and meeting other kids. 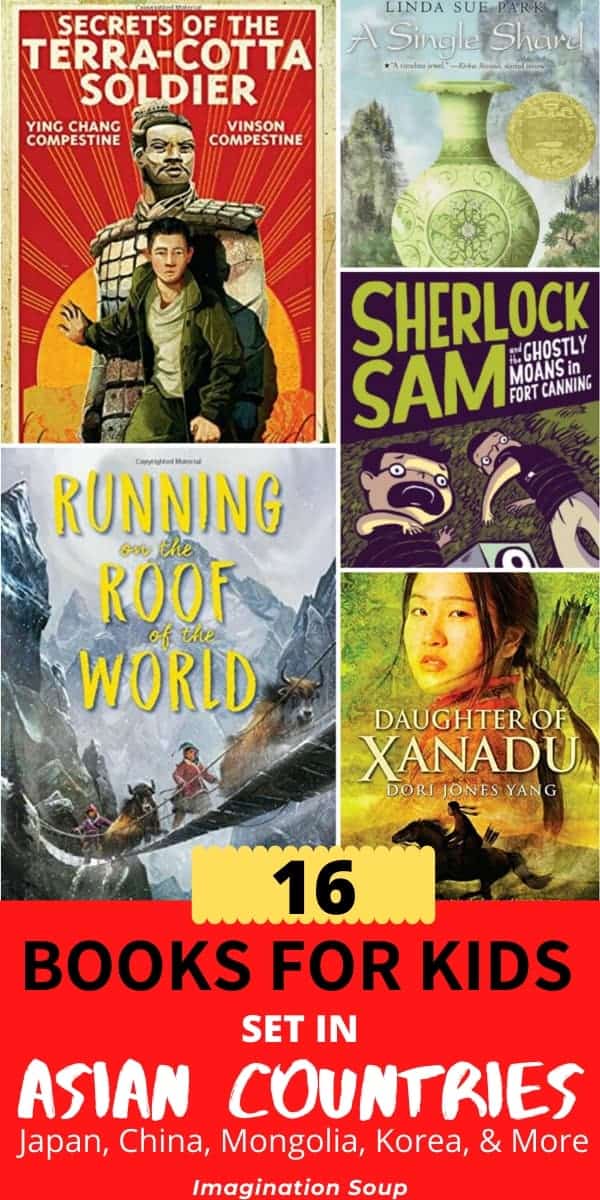 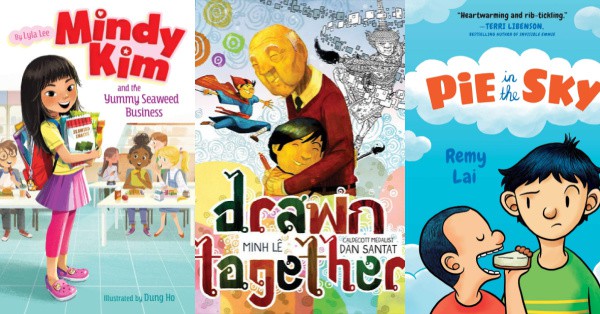 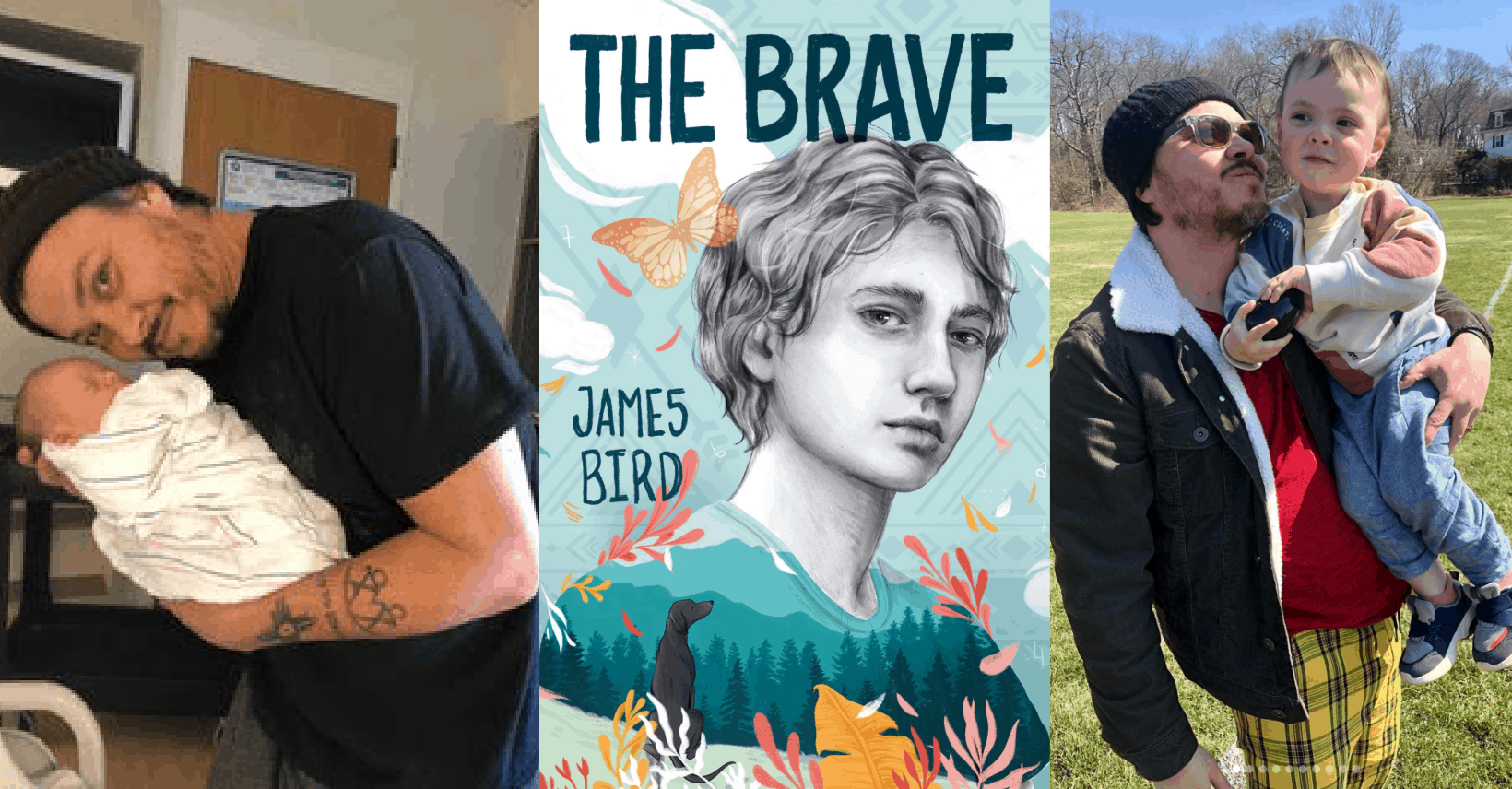 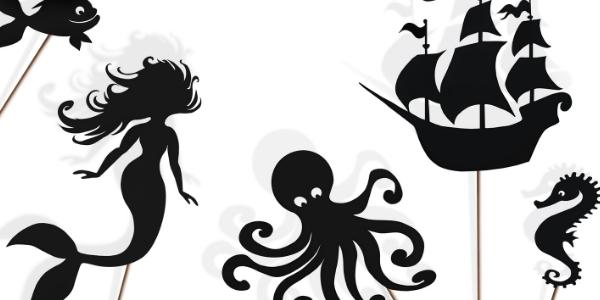