When I say that these are the best picture books of 2017, you can count on these being books that resonate with children; books that kids want to read over and over again. (Sorry, not sorry.) 🙂
As always, I wish you many hours of reading pleasure. Enjoy!
Also see: The Best Nonfiction Children’s Books of 2017 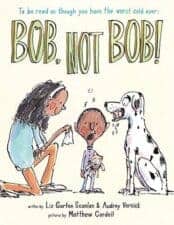 Bob, Not Bob! by Liz Garton Scanlon & Audrey Vernick, illustrations by Matthew Cordell
FUNNY
LOVE, LOVE, LOVE!!! Everyone in my family laughed so hard at this hysterical story about a boy with a very stuffy nose. Every time the boy, Louie, tries to call his mom, instead of “mom” it sounds more like “Bob” — which is the dog’s name! The dog always comes running and slobbering but Louie just “wan by bob!” Poor Louie. Everything he says comes out in cold-speak. And we all can relate to that. As miserable as he is and as funny as it is, it’s heart-warming to see that Louie is loved by both his dog and his mom. (Also on: Big List of Funny Picture Books for Kids.) 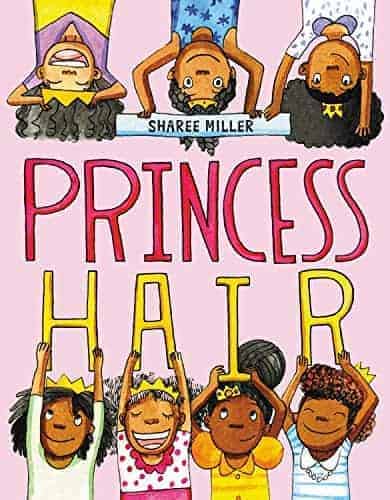 Princess Hair by Sharee Miller
BLACK HAIR / SELF-ACCEPTANCE
I love this joyful celebration of the many styles, textures, and shapes of black hair! These princesses have dreadlocks, kinks, head wraps, curls, and bantu knots. “Princesses with AFROS do-si-do. // Princesses with BRAIDS throw parades.” All the princesses love their hair which we see in exuberant illustrations of playful, happy little girls. 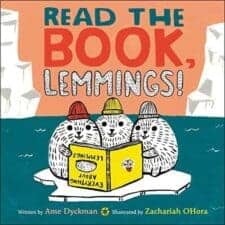 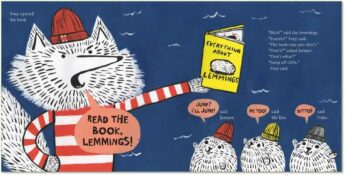 Read the Book, Lemmings! by Ame Dyckman, illustrated by Zachariah OHora
FUNNY
Foxy’s book specifically says that lemmings (small, fuzzy, illiterate rodents) do not jump off cliffs. Which he explains to the lemmings on his arctic ship, the S.S. Cliff. Unfortunately, they don’t listen and all jump off the Cliff. Fox is so annoyed because THE BOOK SAYS that lemmings don’t jump off cliffs. Finally, after a third icy water rescue of the lemmings who are not supposed to jump off the boat, the lemmings explain why they don’t do what the book says — they can’t read. See how reading fixes everything? Foxy and these not-too-smart lemmings will crack you up. 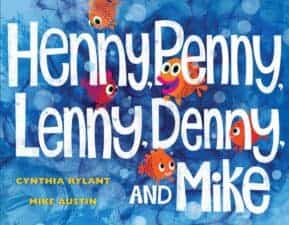 Henny, Penny, Lenny, Denny, and Mike by Cynthia Rylant, illustrated by Mike Austin
FUNNY
Their fish tank is SO FAB. Enjoy the fabulous life of these exuberant fish friends as they SWIM, SWIM, SWIM, meet new fish, and get a . . . fairy castle! When Lenny gets stuck inside, it’s the oft-ignored snail who helps Lenny escape THE TRAP. POP! Life returns to before, . . . SO FAB. You’ll love the bright colors, all cap words, and quirky storyline. 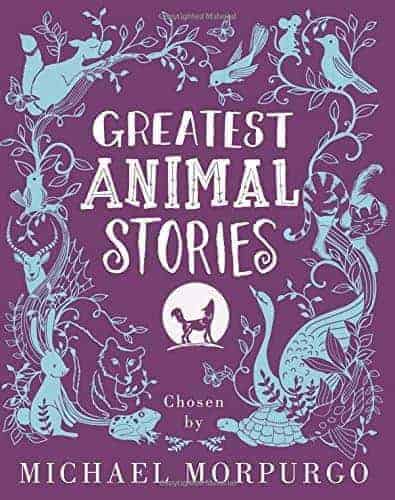 Greatest Animal Stories chosen by Michael Morpurgo
ANIMALS / FABLES
This book is amazing — I love every bit of it from the chosen stories to the artwork to the texture of the pages. Another thing I LOVE about this book is that the text to picture ratio is absolutely perfect! Perfect for reading aloud and perfect for reading to yourself. The stories are about all animals, some from different cultural traditions; most of the stories contain a valuable lesson like “The Fox and the Crow” or explain a natural phenomenon like “How the Bear Lost His Tail.” All stories are delightfully entertaining. 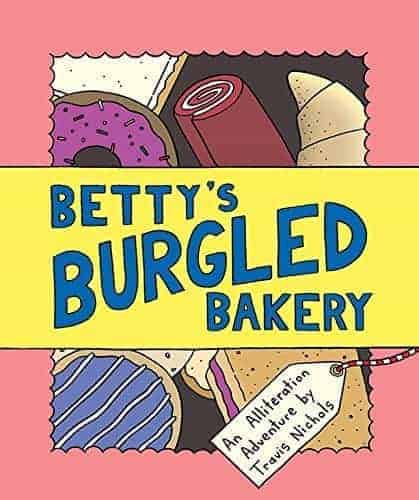 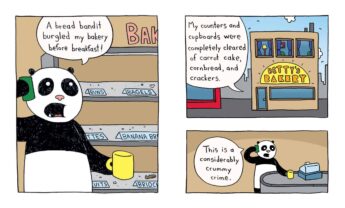 Betty’s Burgled Bakery An Alliteration Adventure by Travis Nichols
MYSTERY
It’s both hilarious and impressive to read a mystery adventure written in alliterative sentences. Betty has enlisted the help of the police to solve the crime of who burgled her bakery. And you’ll never believe who did it!! Sure to be a new read-aloud favorite. 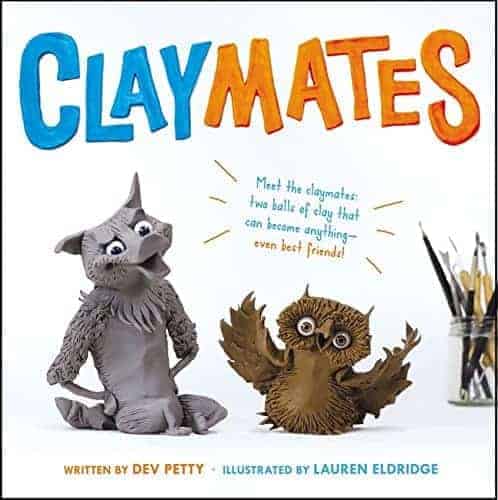 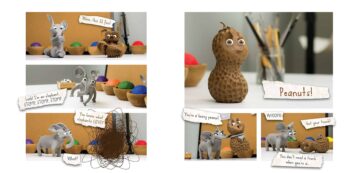 Claymates by Dev Petty, illustrated by Lauren Edlridge
CREATIVITY / DIVERGENT THINKING
Totally creative, playful, and fun! I LOVE this book. And I predict you will, too. (And you’ll want to make your own clay story after reading this.) Two clay blobs, a gray and a brown, meet in an art room. An artist arrives to make the gray clay into a wolf and the brown clay into an owl. When she leaves, the two clays decide to play. As they transform themselves into many other creatures and objects (a peanut, an elephant, an alien, a narwhal), you’ll crack up at their different personalities — one who is enthusiastic and one who is more reluctant. The two are on a roll but oh, no — what will they do when the artist returns? 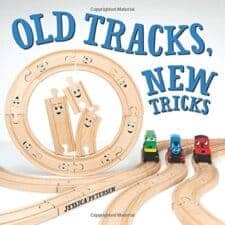 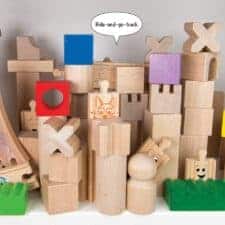 Old Tracks, New Tricks by Jessica Petersen
PLAY
Snubbed by the trains, the new wooden train tracks decide they’ll show the other tracks fun ways to play — like hide and go track, tick-track-toe, tracks stack towers, dominoes, and so much more. These creative play ideas will get your kids thinking of their train tracks in many new, inventive ways. One of my new favorite picture books, this one is a kid-favorite keeper. 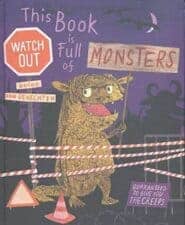 This Book is Full of Monsters by Guido Van Genechten
INTERACTIVE
Not just for Halloween, but fun for any time of year, you’ll be immersed in the stinky, loud, interactive world of monster-kind. Each page instructs kids to do something to prepare for the next page’s monster — hold their nose, be very quiet, plug their ears. And if they love that, and I think they will, they’ll love the ending! There are many interactive books on the market right now that feel contrived and predictable. Not this one. I’m very impressed. It’s a favorite of 2017. 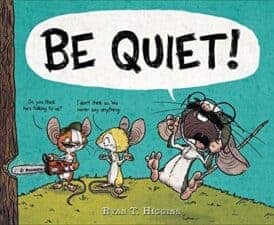 Be Quiet! by Ryan T. Higgins
FUNNY
Rupert tells his two exuberant and talkative friends that the book is supposed to be wordless but the friends just cannot stop “helping” with ideas for the book, infuriating Rupert and cracking up the reader. Cartoon conversation bubbles, hilarious dialogue, and a funny storyline will keep you entertained from cover to cover. 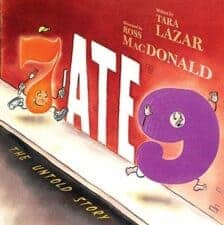 7 Ate 9: The Untold Story by Tara Lazar, illustrated by Ross MacDonald
MYSTERY / FUNNY
6 bangs on Private I’s door for help to escape 7 because of the rumor that 7 ate 9. YIKES! But what really happened to 9? Pitch perfect tongue-and-cheek number and word humor will crack you up throughout this suspenseful, funny story.

Jabari Jumps by Gaia Cornwall
FACING FEARS
Jabari is ready to jump off the diving board. Mostly. His dad tells Jabari that he feels scared too, and sometimes after a deep breath and telling himself he is ready, the thing stops feeling scary and feels like a surprise instead. I like this advice, don’t you? And it works for Jabari, too. Beautiful illustrations, perfect text to picture ratio, and a helpful, relatable story make this a best picture book of 2017. 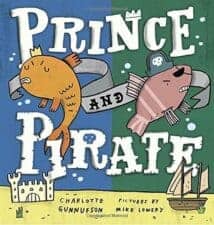 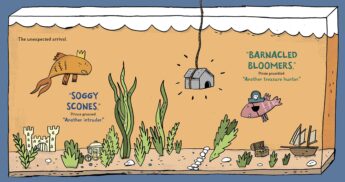 Prince and Pirate by Charlotte Gunnufson, illustrated by Mike Lowery
FUNNY
Prince and Pirate are two unique fish who live in their own fish bowls. Until one day. That is the day they are moved to a tank together! They do not get along. AT ALL. They name call and pester each other up until they decide to help the new arrival, a small, scared dogfish. You’ll love the bright illustrations, hilarious dialogue, and strong personalities of Pirate and Prince. 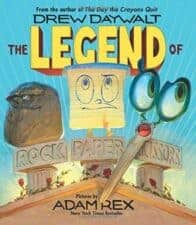 The Legend of Rock, Paper, Scissors by Drew Daywalt, illustrated by Adam Rex
FUNNY
Don’t miss this uproarious adventure of epic proportions that will merit reading and rereading then playing many rounds of rock, paper, scissors. Rock comes from the Kingdom of Backyard where he easily defeats all his opponents (a clothespin and an apricot). He needs a worthy foe. In the Empire of Mom’s Home Office, the super smart Paper discovers the same thing — no one can beat him either. And in the Kitchen Realm, no one can best Scissors, not even the fearsome breaded chicken dinosaurs. Each of these warriors sets off to find a worthy opponent. Finally Rock meets Scissors, Paper meets Rock, and Scissors meets Paper for epic battles. They are so happy to lose to someone worthy, they become best friends and keep battling. I particularly love the hilarious conversations between the three warriors and their opponents such as, ““I have come from the far reaches of Kitchen to battle you, O bizarre and yummy breaded dinosaurs!“” and ““If by “battle pants” you mean “no pants, but I’m willing to fight you,” then yes . . . yes, I am wearing my battle pants, weird scissory one!””  Adam Rex’s illustrations really bring the action and drama of this story alive. 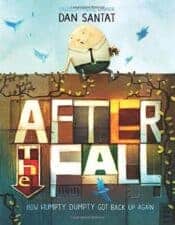 After the Fall: How Humpty Dumpty Got Back Up Again by Dan Santat
FEAR / COURAGE
After his fall of the wall, Humpty Dumpty isn’t quite all together again. He is now afraid of heights. Humpty decides to make a paper airplane that can fly high since he can’t. But the airplane he spends so much time crafting flies up and over the high wall. Even though he’s terrified, Humpty wants his airplane. He climbs the wall. One step at a time. Until he’s not scared anymore. This beautifully illustrated and conceived picture book that shows kids fear is normal and courage is doing something even when you’re scared.