Want the best, most addictive audiobooks for teens? Check out this list of the most popular YA titles that teens (and adults like me) can’t stop reading with our ears. They’re soooo good.

In 2017, public libraries lent a record number of audiobooks. Why? Because it’s so easy to download books to your smartphones. You’ll get in more reading by listening to your books!

Use the one-tap reading app, Libby to download books (for free) from your local library. Or, use your Audible / Amazon subscription where you can borrow books for a monthly fee. (The first month is free though.)

Finally, having two teenagers myself, I must say that audiobooks are the ONLY way my teens are actually reading for pleasure.

Listening lets my artist daughter draw, also and my other child who has ADHD move around the room freely.

It’s a challenge to get teenagers to read non-assigned books at this age so give audiobooks a try– it might just work for your teens, also. 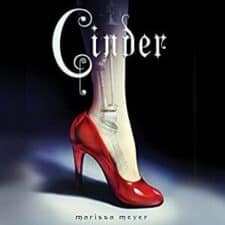 (Lunar Chronicles #1) by Marissa Meyer
Cinder is a skilled mechanic cyborg, a human with machine parts, and lives with her step-mother and sisters. (Remind you of Cinderella yet?) When Prince Kai asks her to fix something for him, she becomes entangled in a plot that puts her life at risk and the entire country’s fate is hanging in the balance. This is an AMAZING can’t-put-it-down series! 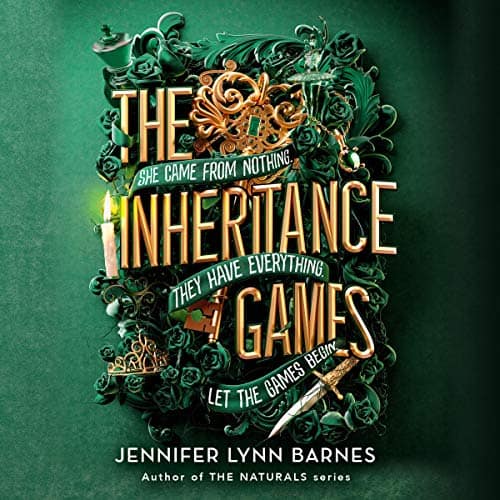 The Inheritance Games by Jennifer Lynn Barnes, narrated by Christie Moreau
Avery, a motherless girl living with an older half-sister, unexpectedly inherits millions of dollars from a billionaire she’s never met. The billionaire’s family, who doesn’t inherit, mistrusts her but she’s forced to live with them anyway, to fulfill the will’s requirements. Not only is this miserable but someone is trying to kill her and she still doesn’t know why she’s the beneficiary. Maybe the clues and puzzles left behind will help her solve at least one of the mysteries… Fantastic! 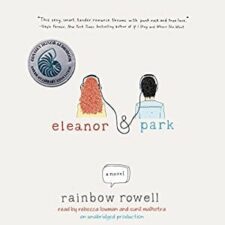 Eleanor and Park by Rainbow Rowell
Not only will you love the writing but you’ll also love the characters Eleanor and Park, teens who are seemingly too different yet who fall in love with each other anyway. It’s such a beautiful love story, you won’t want it to end. 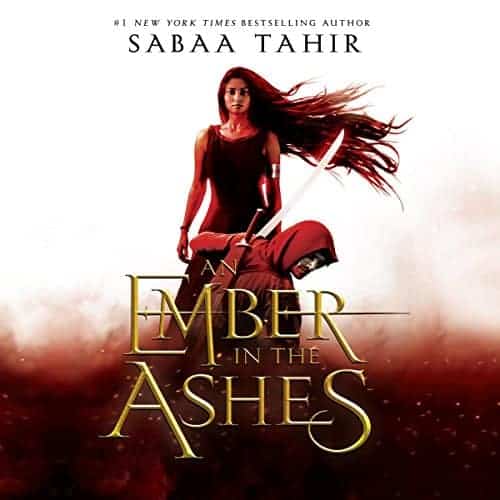 Ember in the Ashes by Sabaa Tahir
Part historical (ancient Rome) and part fantasy, Elias and Laia live in a world that enslaves them both in different ways — Elias to fight and Laia to serve and spy. This is an epic page-turning series with lots of mystery, action, and a hint of romance. It’s SO good that it’s one of the most popular YA books right now. 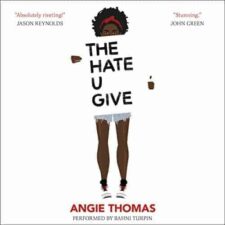 The Hate U Give by Angie Thomas, narrated by Bahni Turpin
Starr’s life is divided into her family’s urban neighborhood and her fancy suburban school. One day when she is riding in the car in her neighborhood, her unarmed friend is shot by a policeman. With people rioting and the policeman not getting punished, Starr needs to decide if she’ll speak out about what really happened. It’s a gut-wrenching drama that will make you think. Absolutely brilliant writing. (*Violence and language.) 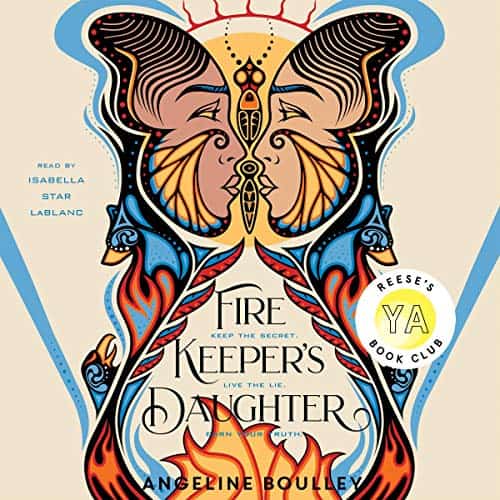 The Firekeeper’s Daughter by Angeline Boulley, narrated by Isabella Star LaBlanc
Daunis’s science-teacher uncle just died of a drug overdose, her grandmother suffered a stroke, and to finish out the third bad thing, her best friend is shot by her drug-addict boyfriend. Meth is causing a lot of the bad things and Daunis is recruited by the FBI to work as a confidential informant to find who is making and distributing the meth. The writing and character development are AMAZING — the mystery is complex and suspenseful– and the audiobook narrator is extremely talented. (*Sex, drugs, rape & violence.) 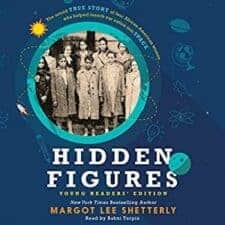 Hidden Figures (Young Readers’ Edition) by Margot Lee Shetterly, narrated by Bahni Turpin
One of the most popular downloads on Audible, this YA audiobook adaptation deftly blends the historical realities of racism and intolerance with the inspiring life stories of four mathematically talented women. These women worked to build this country’s aviation and aeronautical programs starting from the Civil Rights era to the Space Race and the Cold War to the fight for gender equality. I loved this book! 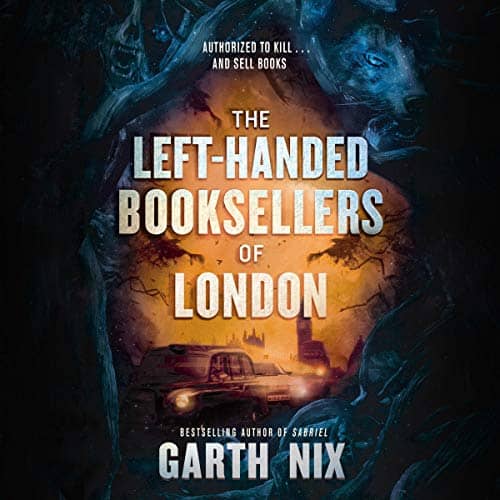 The Left-Handed Booksellers of London by Garth Nix, narrated by Marisa Calin
Unique world-building, this historical fiction story set in London is filled with dangerous monsters and magical creatures that sometimes get into our world from their own Old World. Susan, on a search for her father, becomes ensnared in the Left-Handed Booksellers when it turns out her father may be an Old One…a powerful, dangerous entity. 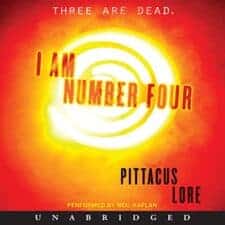 I Am Number Four by Pittacus Lore and others
John isn’t a human teenager, he’s one of 9 Loric children who were sent to Earth when their planet was attacked by the evil Mogadorians. He moves around a lot with his guardian to escape these alien killers who can only kill the kids in numerical order…Now that he’s come of age, he develops his Legacies — powers that will help him survive. But one, two, and three have been killed already. John is next. 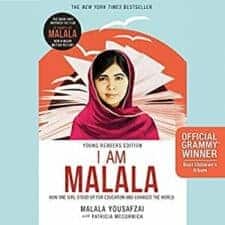 I Am Malala: How One Girl Stood Up for Education and Changed the World (Young Readers Edition) by Malala Yousafzai with Patricia McCormick, narrated by Neela Vaswani
This is a powerful, well-told personal story from the wise, self-reflective perspective of Malala Yousafzai. Malala draws readers in with her accounts of daily life in Pakistan — the sounds, smells, sights, habits. We are hooked from the first page. As the stage is set, we learn how her country used to be and the fearful place it became with the Taliban’s influence. After she is shot for her blog writing in support of educating females, she’s taken to England for recovery and safety. The confusion and contrast between the countries and cultures really stand out during this time. But what is even more striking is Malala’s hope, positivity, and belief in what she stands for. You can’t listen to this audiobook and not be changed by it. 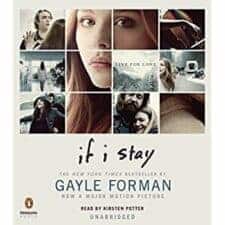 If I Stay by Gayle Forman, narrated by Kirsten Potter
Mia’s trying to remember what happened after her entire family was killed in a car accident, all but her. She’s trapped in a broken body and wondering if she has a life worth living anymore. SO, so powerful! 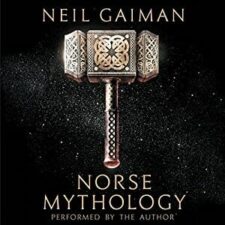 Norse Mythology by Neil Gaiman, narrated by Neil Gaiman
Discover the major stories of the Norse culture from Neil Gaiman’s perspective. Gaiman shares stories of the beginning of the Gods, how the Nine Worlds were formed, how Odin lost one eye, the children of Loki, and so much more, all the way to Ragnarok. These stories are more bloody than the Greek pantheon but they are quite entertaining nonetheless and hard to put down once you get reading. 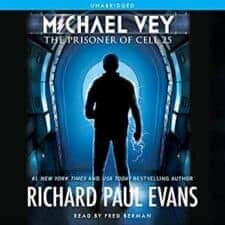 The Prisoner of Cell 25 (Michael Vey #1) by Richard Paul Evans, narrated by Fred Berman
If you like fast-paced, not-too-hard science fiction, you’ll love this fantastic audiobook about a boy with electrical powers versus an evil group who wants to control him and others like him. It’s an addictive series for teens who enjoy action, suspense, and adventure. 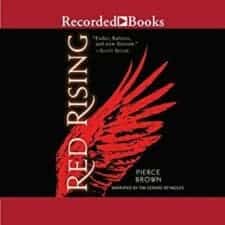 Red Rising by Pierce Brown, narrated by Tim Gerard Reynolds
Thousands of teen readers, teen, and adult love, love, love this YA book. It takes place on Mars with a caste society, color-coded by the level of your caste. Darrow, a low-caste Red, infiltrates the ruling Gold caste’s special training school. His training? Kill or be killed. Lead an army or be enslaved. It’s better than Hunger Games – especially for boys who don’t want to read about romance and really get enthralled with battle strategy. Excellent. And every book in this series is well-written, enthralling, and mind-blowing. (*some mature content — nudity and swearing) 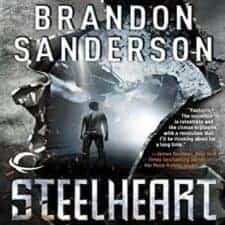 Steelheart by Brandon Sanderson, narrated by MacLeod Andrews
Teens will love this YA adventure from this uber-talented author!! It’s typical of Sanderson’s amazing world-building and offers tons of unforeseen plot twists and turns. In this world, the Epics are super-powerful individuals who have extraordinary powers and no goodness. Epics control the cities. David’s father was killed by Chicago’s Epic, Steelheart so now David wants revenge. He joins the rebel group called the Reckoners in order to assassinate Steelheart and all Epics. Memorable characters, a spell-binding plot, and page-turning action! 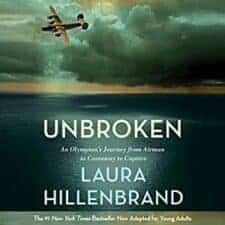 Unbroken Young Adult Adaptation by Laura Hillenbrand, narrated by Edward Herrmann
After Louis Zaperini’s WWII plane goes down in the open ocean — he’s starving, adrift, and vulnerable to enemy planes. His triumphant survival is nothing short of incredible. You’ll be amazed and inspired by his incredible true-life story. 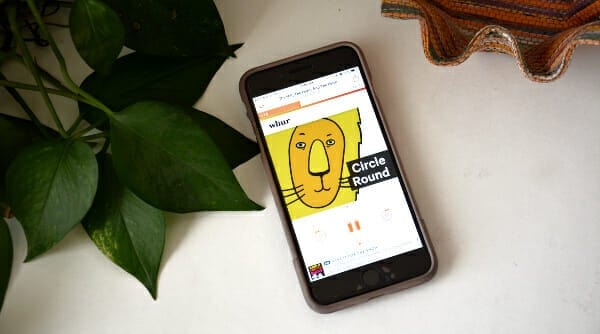