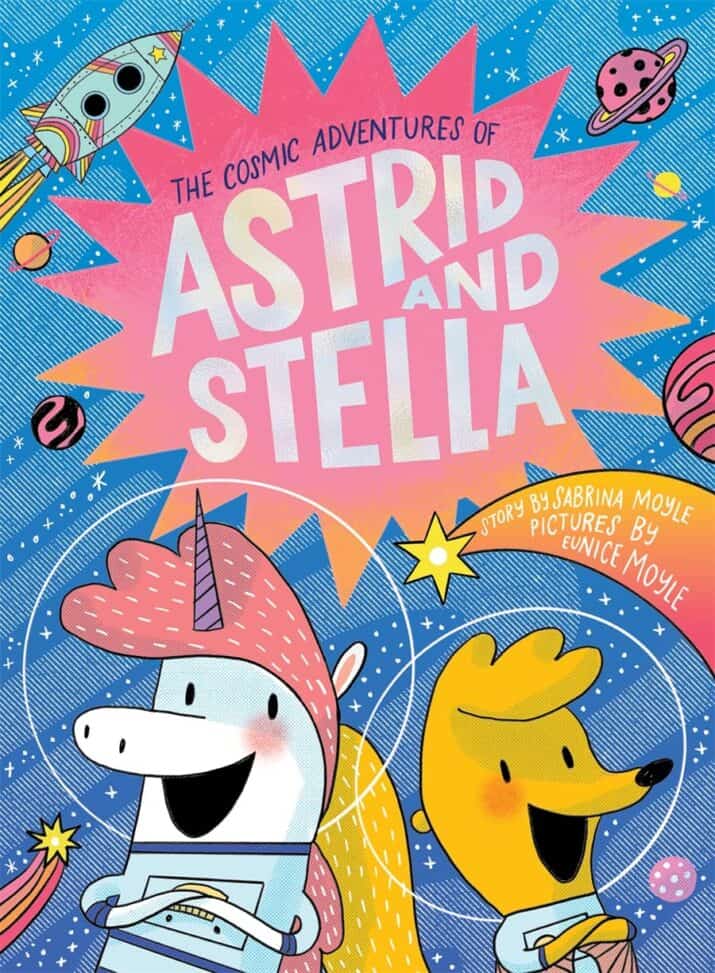 The Cosmic Adventures of Astrid and Stella by Sabrina Moyle, illustrated by Eunice Moyle
ages 6 – 9
Astrid and Stella (and their robot) are ready to rocket into outer space. When they get a distress call from Caturn about Kittywonkus taking over the planet, they decide to save the planet –but how will they get Kittywompus to break the spell? When they succeed, they head to the planet Bloop for a beach vacation. Filled with puns, hilarity, adventure, and cuteness — this is sure to be a new favorite story for your 6- to 9-year-olds. 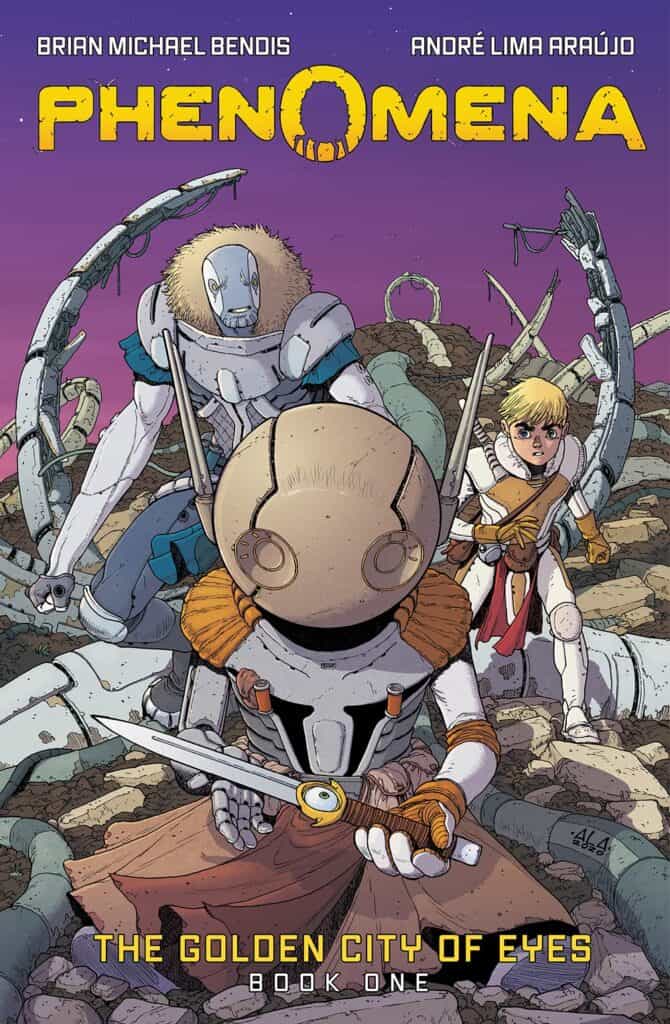 ages 9 – 12
In a wildly unique world, this is a journey of a boy and a cyper named Spike who travel towards a mysterious city. They follow a deceitful girl who stole Spike’s blade. As they venture north, they experience new places, creatures, and methods of travel including the girl’s flying abilities. When they arrive at the fallen Golden City, they fight the invaders which reveals Spike’s true purpose. Exceptional artwork and storytelling — a must-read! 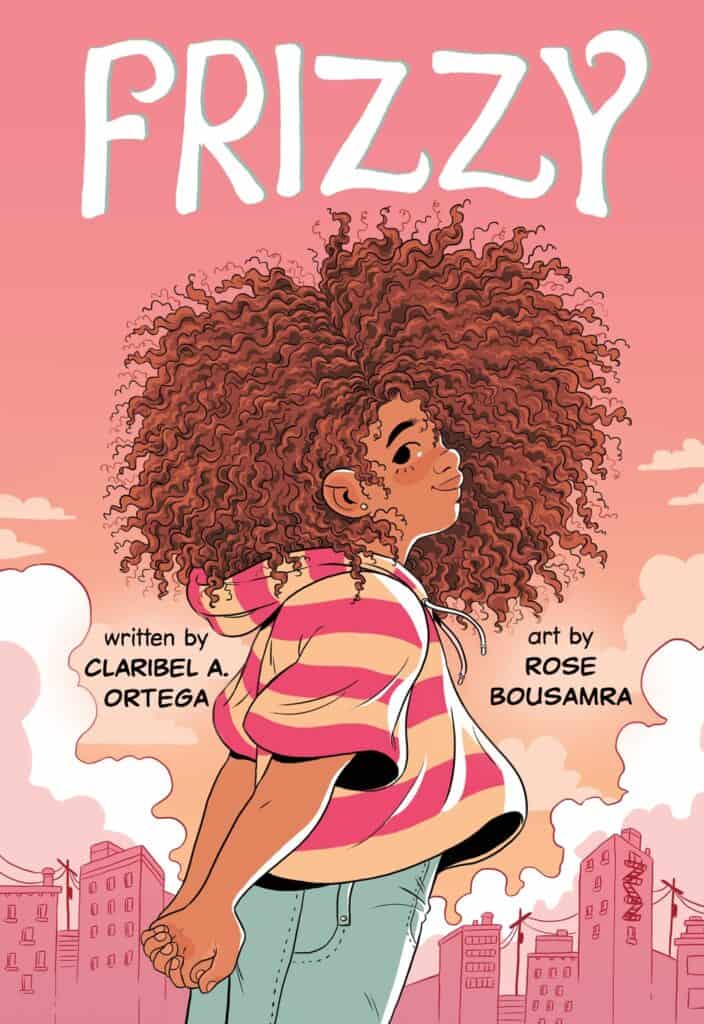 Frizzy by Claribel A. Ortega, illustrated by Rose Bousamra

ages 9 – 12
In a family with good hair and bad hair, Marlene’s mom and relatives judge her hair as bad. Marlene dreads Sundays when she’s forced to spend all day at the salon getting her hair straightened to look presentable in her mom’s eyes. On a weekend sleepover, her tía shows Marlene how to properly take care of her hair and the right products to use so she can wear her naturally curly hair. It’s a fantastic journey of empowerment and self-love! 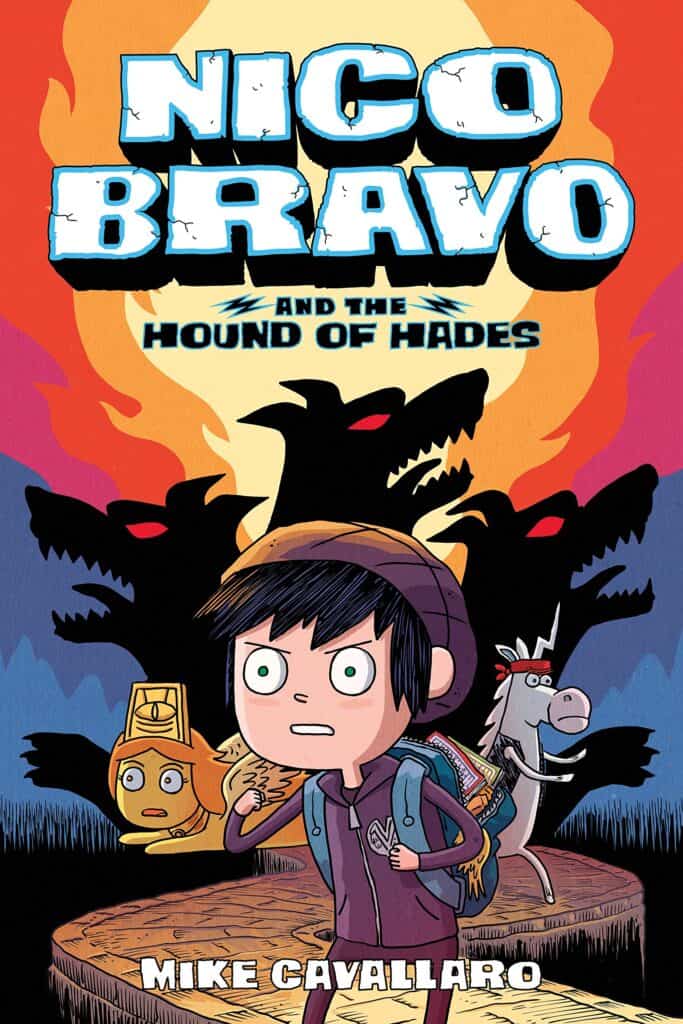 Nico Bravo and the Hound of Hades by Mike Cavallaro
ages 9 – 12
Nico works at a magical supply shop with a sphinx and unicorn. When a girl named Eowulf, descendent of Beowulf, shares that she’s going to slay the three-headed hell hound, Nico knows that he needs to stop her so the underworld spirits and zombies aren’t released. He doesn’t stop her, and soon the shades are leaving Hell. He and his friends embark on the adventure of a lifetime to catch Cerberus and stop the zombies. 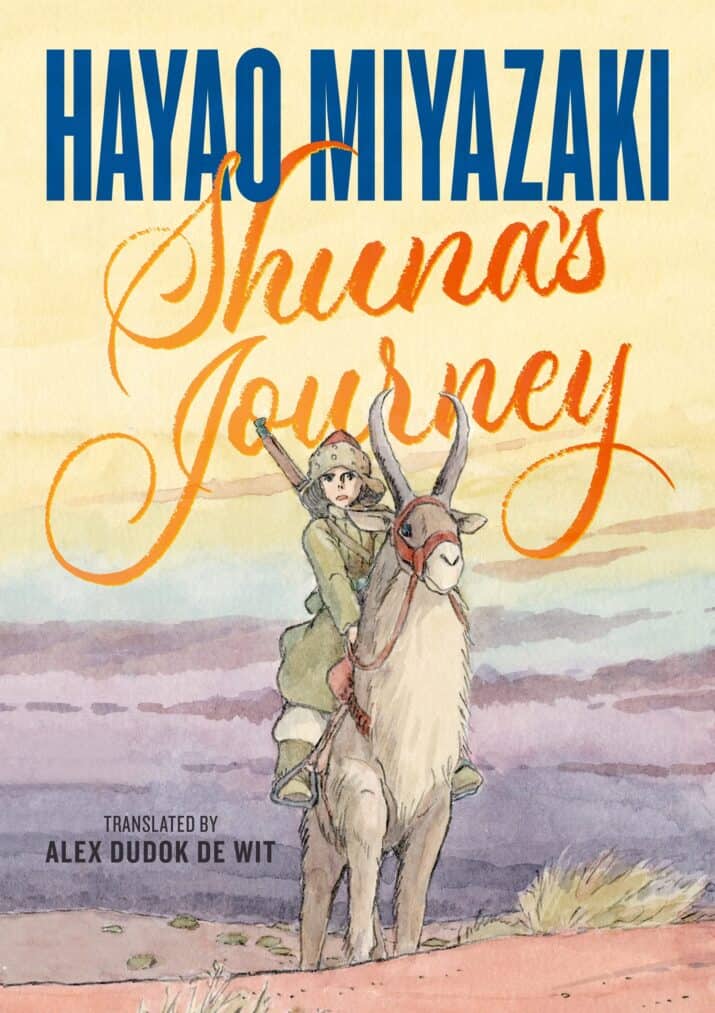 Shuna’s Jouney by Hayo Miyazaki
ages 9 – 12
Fans of Miyazaki like me will love the beautiful world-building of this newly translated manga that predates Studio Ghibli. A hero’s journey with familiar themes of respect for nature, greed, and human slavery, this story follows Shuna who travels to find grain to feed his starving community. As he searches, he frees a girl from captivity who joins him. When he finally reaches the land of the God-Folk, he barely survives. But he does and returns to his community with the precious golden grain. Written in narrative description with limited dialogue, this book’s language felt a bit more telling than showing, so I felt glad for the showing of the illustrations. 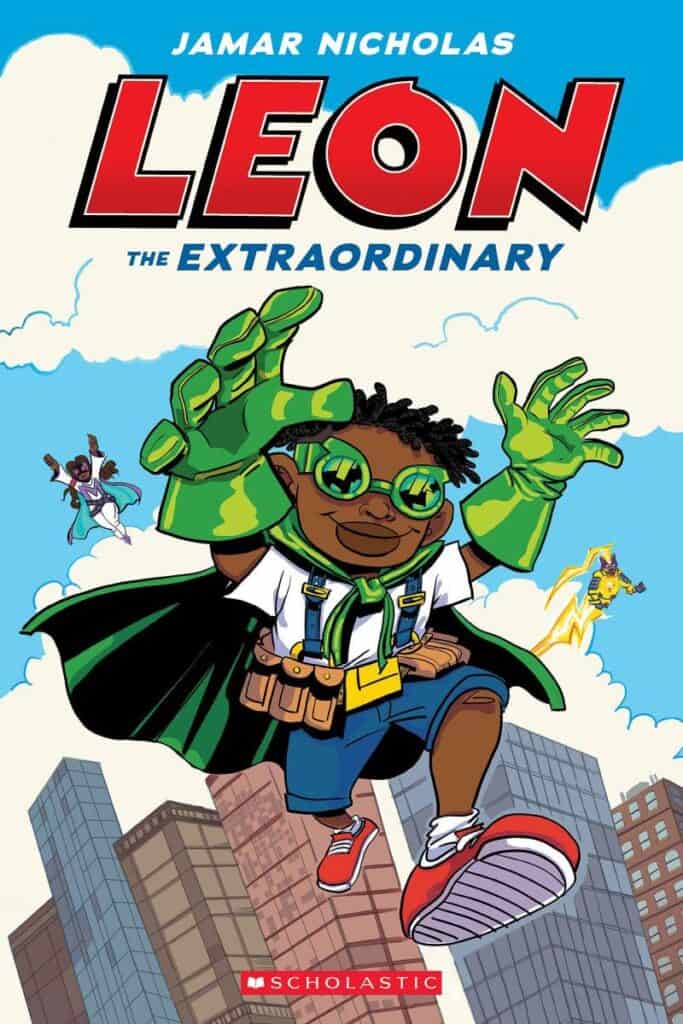 Leon the Extraordinary by Jamar Nicholas
ages 9 – 12
In a world of Supers, Leon isn’t a Super per se, but he still wears goggles and a homemade cape to stand up to bullies like Clementine, a mean girl who likes to take lunch money and humiliate Leon. When the other kids with phones turn into zombies from a game app, Leon and Clementine are the only kids who don’t have phones and aren’t affected. They stop the evil game creator, Thaddeus. And in an unexpected ending, after Leon saves the world, he does his laundry chore when he discovers the biggest surprise of his life! 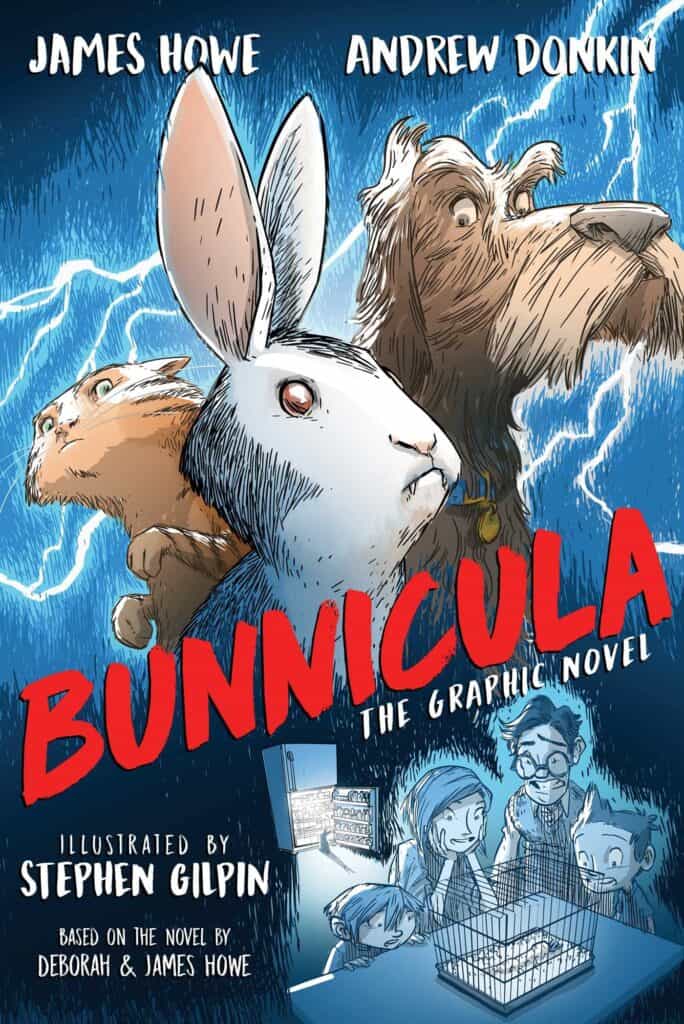 Bunnicula by James Howe and Andrew Donkin, illustrated by Stephen Gilpin
ages 8 – 12
A wonderful graphic novel adaptation! This story is narrated by Harold the dog about the events that transpire when his family brings home a bunny they find at a Dracula movie. The cat Chester believes Bunnicula is a vampire bunny. And why else would he suck out the juices from vegetables and turn them white? But Harold likes his new friend even though Chester still believes the bunny is a vampire and shares his suspicions and evidence. What will you think? 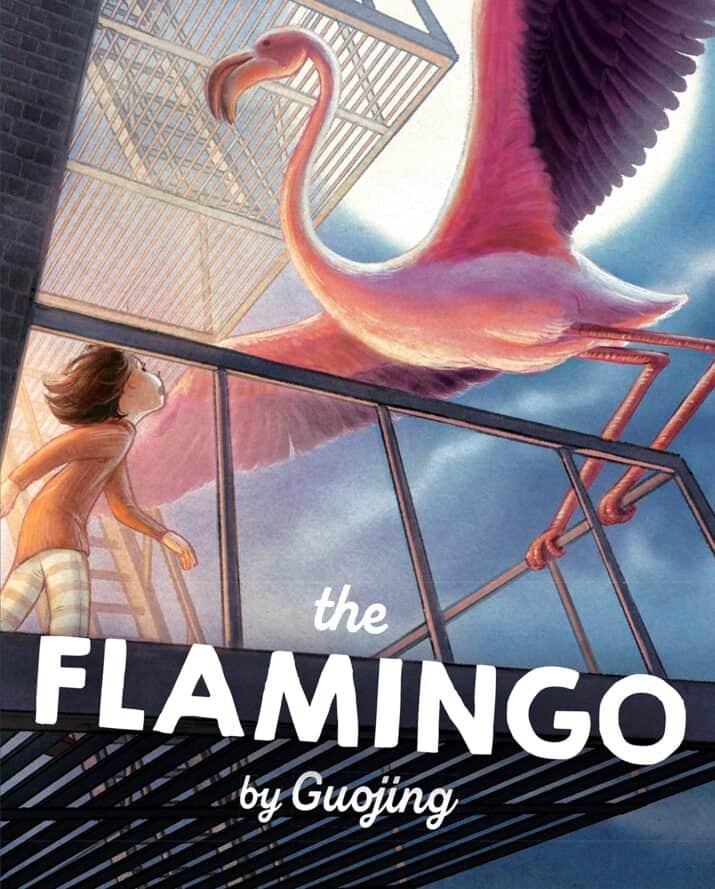 The Flamingo by Guojing
ages 8 – 12
Beautiful, muted illustrations narrate this mostly wordless story. A little girl stays with her Lao Lao at the beach. She finds a flamingo feather which inspires her grandma to tell her a fantastical story about a girl who raises a flamingo from an egg. Later when the girl returns home, she finishes the story on her own, imagining flying on the back of the gigantic flamingo. 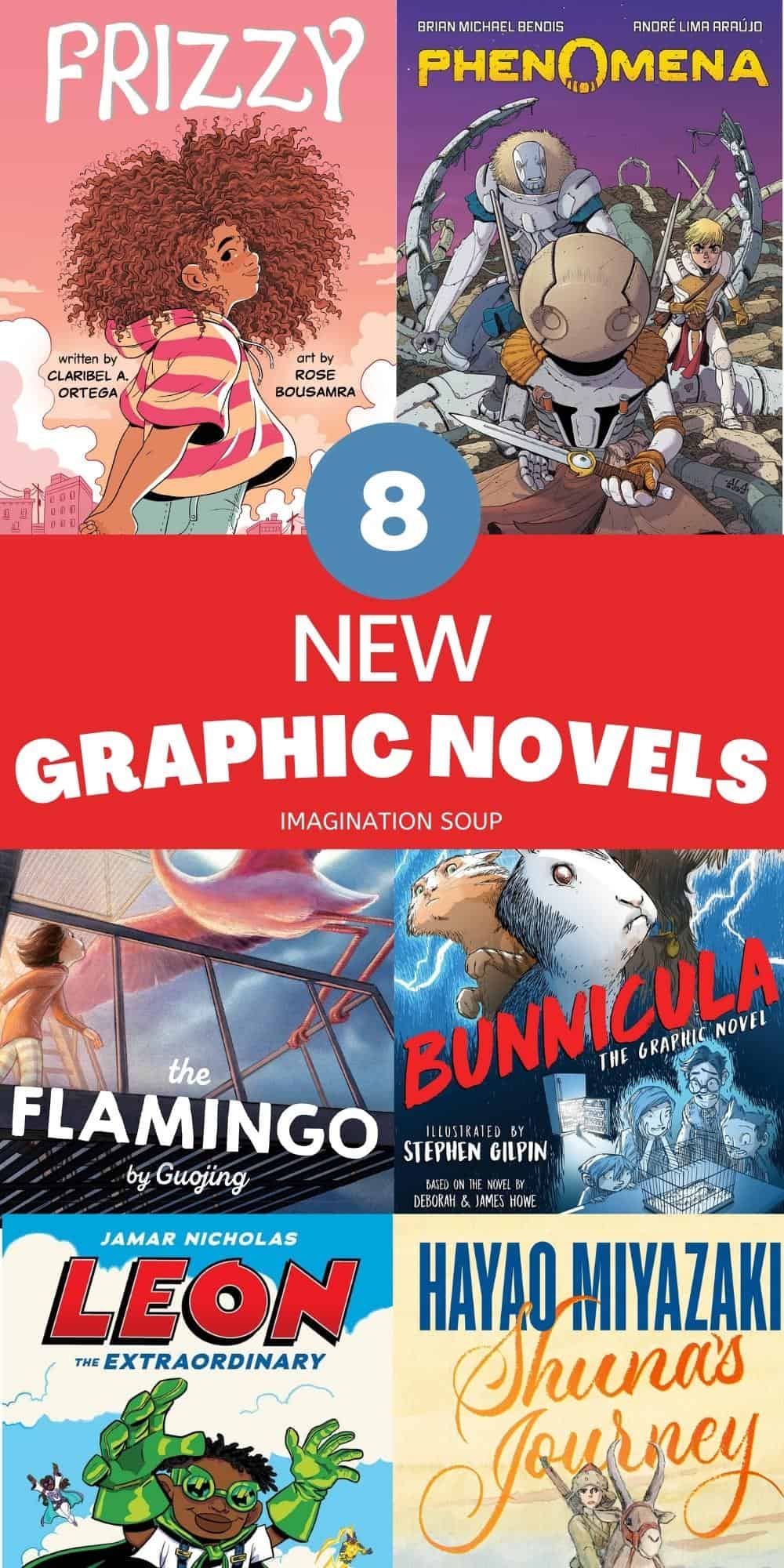 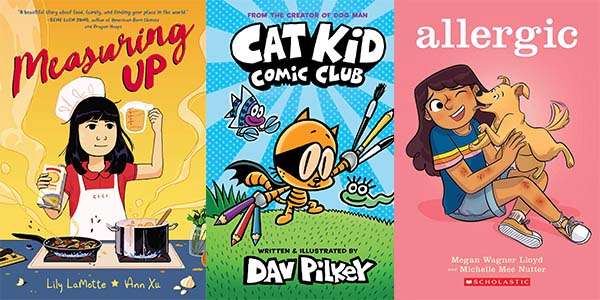 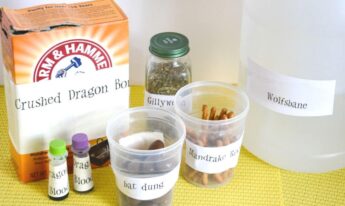