This post may contain affiliate links.
Share on facebook
Facebook
Share on twitter
Twitter
Teachers and parents, use picture books as mentor texts to teach perspective. Stories like these help you model for your students and children that our perspectives and the perspectives of different characters, including the narrator, are how we see the world and the events in it.
It’s easy to call this point of view but from a literary standpoint, perspective is a bit different. Point of view is the narrator’s voice: first, second, or third person.
Perspective is the lens through which we see things. This is DIFFERENT than the point of view.
Reading about characters with distinct perspectives gives children an opportunity to identify the character’s perspective and live there for a while. Noticing a character’s perspectives is a good first step in noticing our own perspectives as well as the perspective of other people in our lives.
As the adage goes, walking a mile in another person’s shoes builds understanding and empathy.
Apply this understanding to higher-level thinking in both social skills, English class, and history. We want our kids to be able to analyze the perspectives of authors and of their peers. We also want kids to be able to take a stand for themselves — how do they feel about screen time? school lunches? bullying? Finally, in writer’s workshop, how can their perspective shift the narration of the story? Do they describe the bully with compassion or with anger?
I hope these books give you a starting point for further discussion and activities. 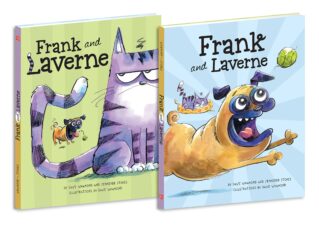 Frank and Laverne by Dave Whamod and Jennifer Stokes, illustrations by Dave Whamod
This book perfectly captures the differences between cats and dogs. It’s two different stories (flip the book to start the second story)– one told from the irritated cat’s perspective and the other from the loving dog’s. These classic opposites will have very distinct takes on life which kids will love.

They All Saw a Cat by Brendan Wenzel
Use this beautiful book to talk about perspective. The cat walks through the world. And is seen by different creatures, each who sees the cat differently depending on their background knowledge. It’s SUCH a cool book on point of view, especially for classrooms. LOVE. 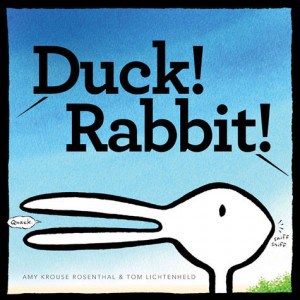 Duck! Rabbit! by Amy Krouse Rosenthal, illustrated by Tom Lichtenheld
Have you seen this visual mind-bender? What are you seeing– a duck or a rabbit? Two off-screen characters have a conversation about the illustration which encourages us as readers to consider each person’s opinion and flip the image in our minds. Which is it? Can you pick?

Elephant in the Dark based on a poem by Rumi, retold by Mina Javaherbin, illustrated by Eugene Yelchin
A merchant arrives with a mysterious beast which he puts into a barn. The villagers are anxious to figure out what it is so they each creep into the dark barn and feel part of the beast. One thinks it’s a like a snake, the other thinks it’s like a fa, others see a tree trunk, and so on. But no one listens to the other people. The next day, the merchant leads the beautiful elephant out of the barn but no one noticed or saw the truth because they were too busy fighting. What a great lesson to listen to others so that you can see the whole elephant — not just your small part. 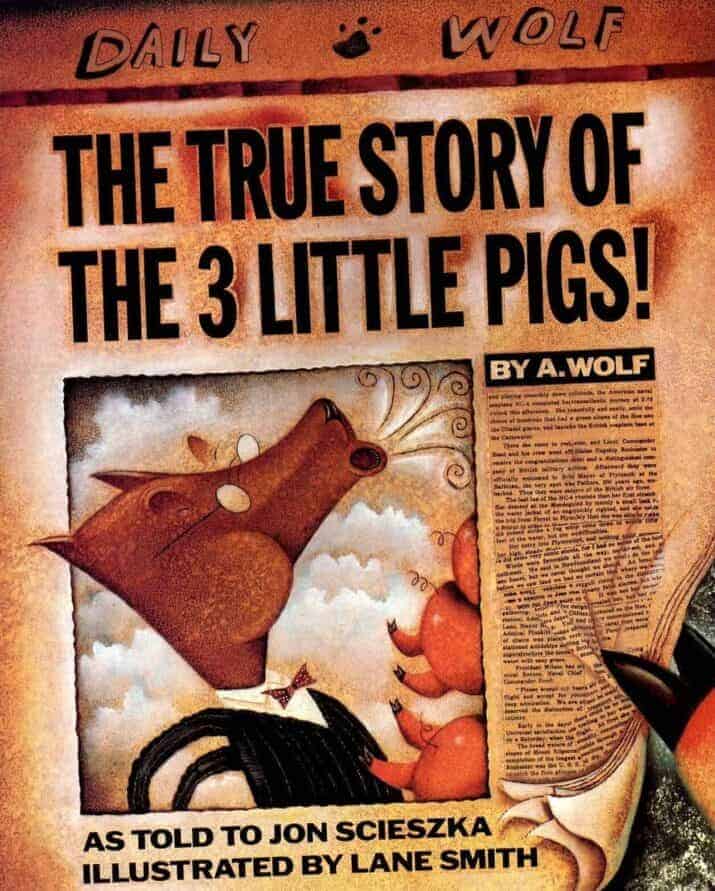 The True Story of the Three Little Pigs by Jon Scieszka, illustrated by Lane Smith
You’ve only heard this story from the perspective of the pigs. Now the wolf tells his side of the story! It’s hilarious as it deftly shows children how the story we are told depends on the narrator. I see this applicable in not just our English classes but also in history.

It’s Not Jack and the Beanstalk by Josh Funk, illustrated by Edwardian Taylor
On every page, the narrator of this hilarious story interrupts narration to boss Jack around. Which Jack isn’t a fan of — neither is Jack a fan of the whole story in general since he doesn’t really want to be a thief and murderer. His dialogue with the narrator will crack you up. Finally, at the giant’s house in the sky, Jack stops following the story. He befriends the giant, makes him a taco salad, and goes to Cinderella’s house for a party. It’s the perfect updated version of Jack and the Beanstalk with a take-charge hero and curmudgeonly narrator. Ask your students, what does each person want? How does this change their goals for the story? 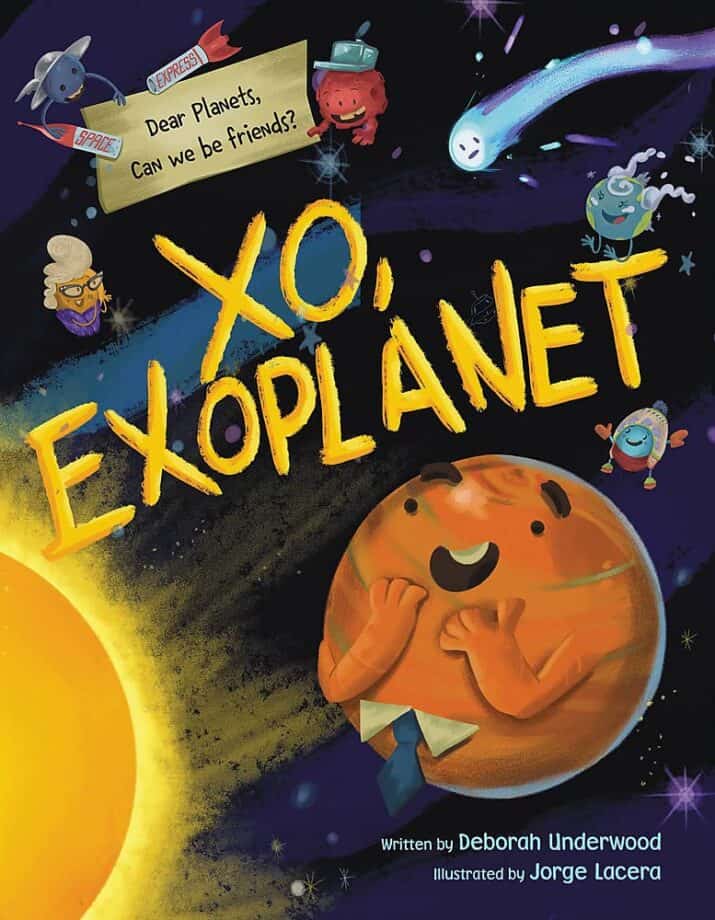 XO, Exoplanet by Deborah Underwood, illustrated by Jorge Lacera
Get ready to laugh at this hysterical story with a poignant message about seeing multiple perspectives! When our solar system’s planets write a friendly letter to an exoplanet, their communication turns into a funny argument when the exoplanet tells our planets that THEY are actually the exoplanets. A visiting comet helps our planets to see that depending on how you’re looking at things, both arguments could be true. Letters, dialogue bubbles, and expressive illustrations capture the planets’ strong emotions.

I Will Fight Monsters for You by Santi Balmes, illustrates by Lyona
It’s a parallel story of a young girl and a young monster who are both frightened about sleeping because of fears about each other. Can the little girl and monster come together and see each other as something not scary? 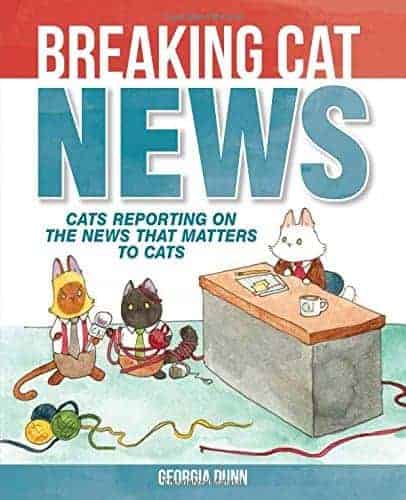 Breaking Cat News: Cats Reporting on the News that Matters to Cats by Georgia Dunn
These are hilarious, tongue-in-cheek cartoons of cats reporting the very latest news from their oh, so news-worthy lives. As you can imagine, they report breaking news about empty food bowls, the best sunspots, and the vacuum cleaner’s return as well as life’s many mysteries. Good stuff, right?! What would the humans think about these same events? 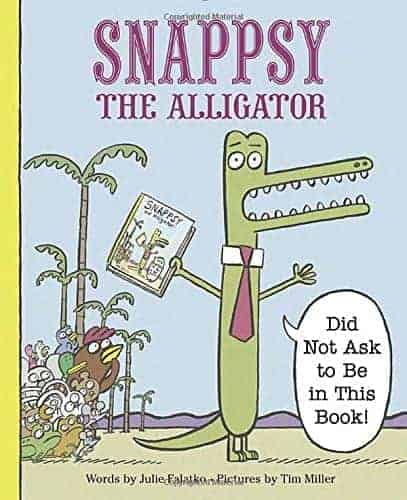 Snappsy The Alligator Did Not Ask to Be in This Book by Julie Falatko, illustrated by Tim MillerSnappsy doesn’t agree to be in this story so much of the story is spent arguing with the busy-body narrator. Very funny. 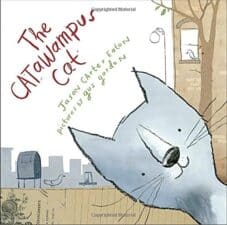 The Catawampus Cat by Jason Carter Eaton, illustrated by Gus Gordon
A small gray cat walks into town slightly tilted to one side. At first the townspeople tried to straighten him out but that didn’t work. What did work was for the people to tilt and notice life differently? Which created all sorts of wonderful, happy results for everyone. You’ll walk (and see life) a little differently after reading this super special slanty picture story! 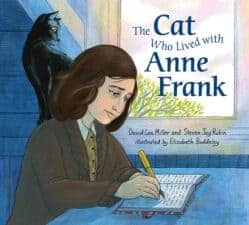 The Cat Who Lived with Anne Frank by David Lee Miller and Steven Jay Rubin, illustrated by Elizabeth Baddeley
The story of Anne Frank is familiar to adults but pretty heavy to introduce to children. However, this picture book is a kid-appropriate introduction to Anne Frank’s story through the perspective of a cat. 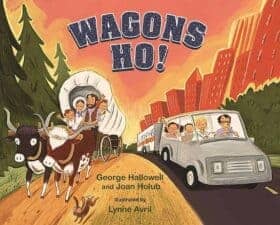 Wagons Ho! by George Hallowell and Joan Holub, illustrated by Lynne Avril
Side by side stories in diary and scrapbook form share two girls’ experiences, both who are moving from Missouri to the west. One story takes place in 1846, the other, in the present day. It’s a fascinating comparison of what is the same and what is different from each girl’s different setting.

July & August The Wretched Rockies
1846
Some wagons are too heavy to go up and down the mountains. Many things must be given up in order to cross. The Rockies look like a graveyard of precious belongings left by many families going west.
Thursday
We cross the Rockies in Wyoming. Buddy is carsick from the curves. 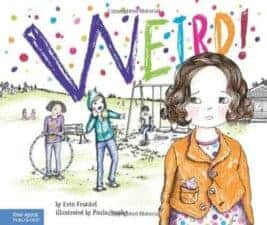 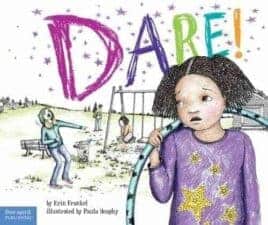 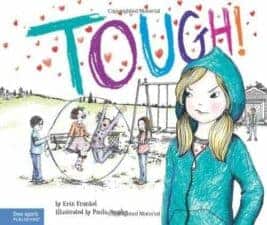 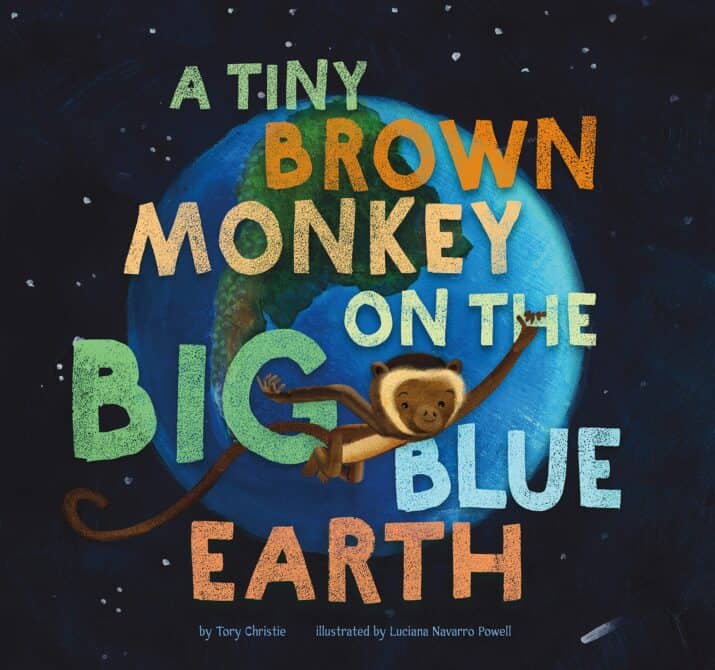 A Tiny Brown Monkey on the Big Blue Earth by Tory Christie, illustrated by Luciana Navarro Powell
What a cool book about perspective showing small to big starting with a tiny brown monkey swinging from a branch in the jungle and moving to a crowded bus to a busy town on an ocean into outer space. Talk about a global perspective! Incredible artwork! 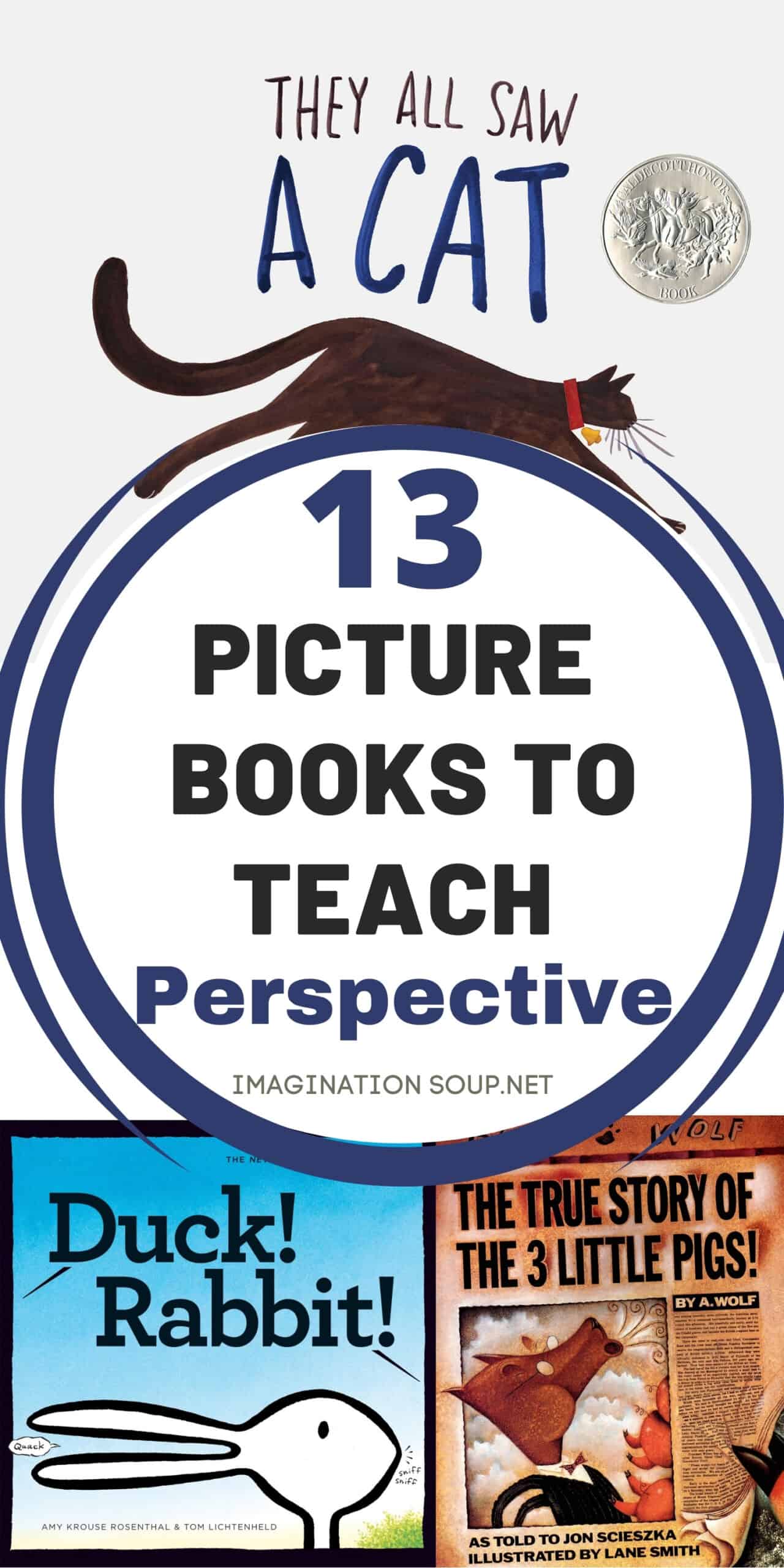 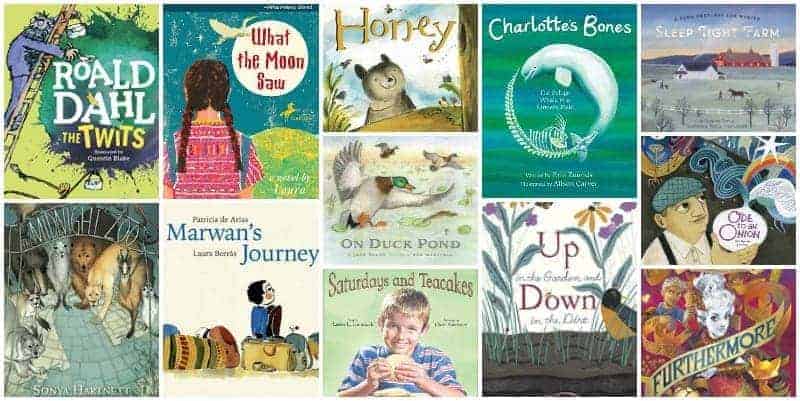 The Best Narwhal Books for Kids