What is the best kind of preschool, early childhood education, for your child? Because, believe it or not January is the time to register for preschool. You want to understand different preschool styles which is a good fit for you. You will also want to know how to tell if it’s a quality preschool. And, I want you to know why I recommend you try a play based preschool.

According to the U.S. Department of Education, “children in high-quality preschools display better language, cognitive and social skills than children who attend low-quality programs.” The National Institute for Early Education Research (www.nieer.org) adds that “the majority of preschool programs in the United States are not judged as good, with many rated far below that.”

I wrote an for Colorado Parent magazine about the different types of preschools. It should be a good introduction to the difference between Waldorf, Montessori, Play-based, Reggio Emilia, Co-op and British Primary.

After doing research for the article, it seemed that a high-quality, play-based preschool was where I wanted to send my kids. 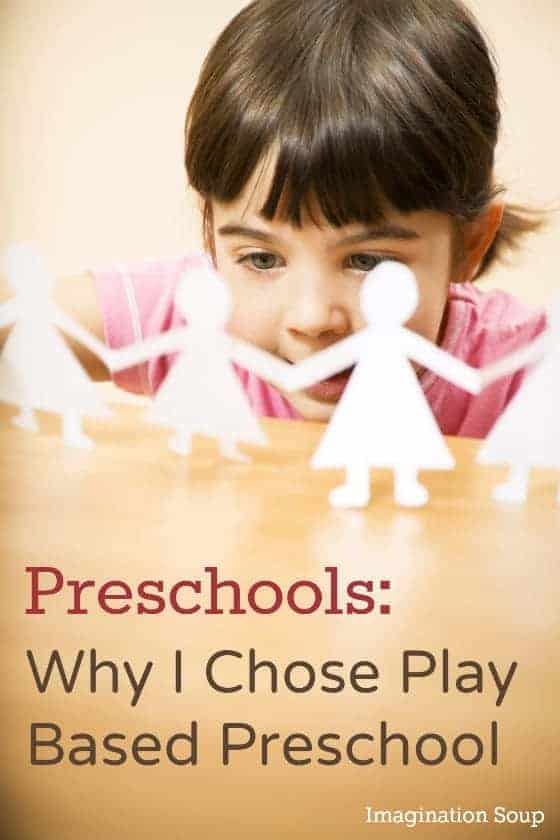 Benefits of a play based preschool:

Language Development: Socio-dramatic play (pretending) improves children’s vocabulary. If a child is playing he or she is a doctor or a mechanic, he or she will use words and mannerisms to embody that role. In good preschools, the child will be supported with new vocabulary and background knowledge for the play scenario.

Problem Solving: Playing with other children not only develops social skills but problem solving skills as well. As a child seeks to cooperate within the play scenario, he or she must learn to compromise and find solutions to maintain the play.

Self-regulation: Self-regulation is the biggest indicator of future education success. It’s the ability to control one’s impulses, to focus attention. In play it’s the successful ability of the “castle guard” to stand still and guard the castle for ten minutes versus asking a kid to stand skill for ten minutes for no playful reason and watching him fail.

I interviewed Vygotskian researcher Elena Bodrova of McRel here in Denver, Colorado about how a parent can tell if the preschool is a good play-based preschool. (She and Debbie Leong wrote a great book for preschool educators called Tools of the Mind which is a great play-based curriculum guide.) Bodrova said she usually sees three scenarios:

[2]actually academic activites made into games and drilled, or

[3]intentional make-believe play with roles, play scenarios where children interact with each other .”

A true play-based preschool is the third.

Bodrova adds, “If you see a kitchen in September and it’s still a kitchen in May, you aren’t going to get intentional, make-believe play.” When she told me this, I had a child in a local preschool and yes, it had a kitchen all year. It really made me take a closer look at the program and decide to switch.

Incidentally, there’s a lot of research about play in the report The Crisis in Kindergarten from the Alliance for Childhood by Edward Miller and Joan Almon. As you know I’m well aware of this issue this year because of my own daughter’s kindergarten experience. I think you’ll want to read this report; it’s really well done and sort of frightening.

It’s clear from years of research that play based learning is how children learn — not academic learning. Yet, schools are increasing the didactic teaching, worksheets, no choice time, no water tables, no blocks, and rejected thoughtful play based learning.

Stay strong, friends – do what’s best for your children and save the academics for when they are developmentally appropriate for a child’s brain, not in preschool.

WHAT KIND OF PRESCHOOL DO YOU PREFER AND WHY?

Starting the Sex Talks at Any Age

My Child is an Advanced Kindergartner, What Should She Read?