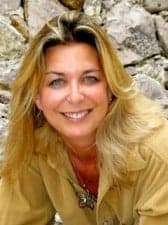 The making of “Dream Something Big/The Story of the Watts Towers” may be the most important book I’ll ever write, and it came about in a magical way. Almost five years ago, I moved to San Miguel de Allende, Mexico, where I took my first hot air balloon ride and was instantly hooked. I began crewing with these unexpected friends and found a whole new life. As I was crewing one day, parked on the side of the road awaiting radio instructions from the pilot, I received a call from my agent, who said an editor at Dial wanted me to write the story of Simon Rodia, who built The Watts Towers. What was strange to me was that an editor I didn’t know, Nancy Mercado, asked me to write a kind of book I’d never written, a biography. “Why on earth did you ask me to write this book?” I asked her later. My previous books were mostly science books. She said, “I don’t know. I just thought you were the right person.”

I now know why. My son has dyslexia. When he was diagnosed in second grade, I had to find out everything I could about it to help him. No one in my family had had what’s thought to be hereditary. One of the most telling signs is reversed letters and numbers. I made several trips to the towers during my research, trying to channel Simon Rodia and saw that there were reversed letters in the few places he’d written in the cement. I’m positive Simon, who has become my hero, had dyslexia. He had little education, but somehow he created the towers with his extraordinary imagination; bits of tile; shards of pottery he found in trash piles; seashells and rocks he collected on California beaches; and cement. People called him crazy at first. What was this uneducated Italian immigrant doing, hunting in trash piles, working day and night on the towers, talking and singing to himself all the while? But thirty-four years later, when he finished his dream, there was a castle, with towers up to 100-feet high, the ship of Marco Polo, a cactus garden made of broken green glass. He called it “Nuestro Pueblo,” our town. People began to call him a genius for creating “a giant flower of folk art.”

Those with dyslexia think “outside the box” but are often labeled as stupid and lazy in school. They begin to think they are. They’re not. Among the brilliant people who have or have had dyslexia are Albert Einstein, Leonardo da Vinci, John F. Kennedy, Pablo Picasso, Thomas Jefferson, Thomas Edison, Alexander Graham Bell, John Lennon, Babe Ruth, Henry Ford, Richard Branson, Stephen Spielberg and so many others who haven given us the best of themselves and changed the world. And nearly every single one of my new friends in Mexico has dyslexia.

People still refer to dyslexia as a “learning disability.” It’s not. It’s a gift with benefits. That’s part of what I’ll talk about at school presentations. They’re a forum of thousands and my hope is that the story I tell about Simon Rodia and his gift will encourage children with dyslexia to think of themselves, with confidence, as great thinkers with the ability to share their gifts with the world, to dream without limits, as Simon did. 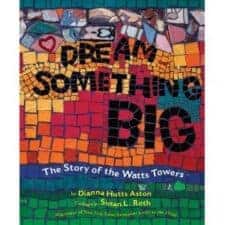 CREATE YOUR OWN WATTS TOWER

Before you begin, you need to find something extra-special that inspires you. You need that one piece of tile, or that one bead or button, that makes you dream something big. Uncle Sam’s towers all started with a piece of tile he found on the ground. So try going outside to find your inspiration. Grab your parents’ hands and take them for a Dream Walk, and then look for something special to put on your tower. Talk about your dreams while you search — and who knows what you’ll create.

Bio: Dianna Hutts Aston is the mother of two children, James and Lizzie. She divides her time between Central Texas and San Miguel de Allende, Mexico, where she recently founded The Oz Project, a group of hot-air balloon enthusiasts who lift orphans and rural children into the realm of the rainbow. She is taking her books into orphanages and countrysides, because she knows that with education, inspiration and love, these invisible children have the power to restore harmony to the world. Dianna is author of many picture books, including the highly acclaimed An Egg Is Quiet with Chronicle Books.

** Read my review of Dream Something Big on Bookmarkable.