I don’t normally loathe things. But I loathe Everyday Math for the hell it put my daughter through and the poor math foundation it gave her.

Thank you so much.

You Don’t Know How to Subtract, Mom

Her subtraction was backwards. 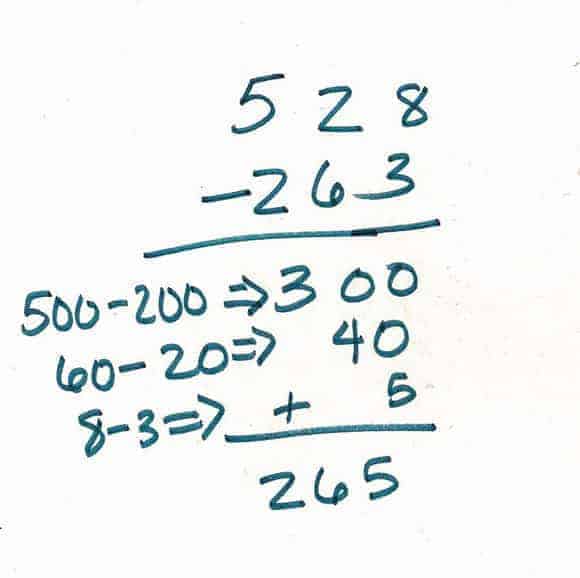 Now, this kind of method is fine for mental math, sure. But NOT for pencil and paper algorithms – it’s confusing and takes too long!

To make matters worse, it’s certainly NOT a good foundation if the math curriculum doesn’t continue like this through middle and high school. A Facebook friend wrote, “After 6 years of homework battles in elementary school, kids get to un-learn [Everyday Math] in middle school with traditional math. How does that make sense to anyone other than the self-appointed Einstein raking it in?”

Her teachers through out these years reassured me that, she’d catch on when she was ready and that the research on Everyday Math was extensive, and it was a really a good way to teach math.

Because those statements weren’t true. Not good research. Nor did she catch on eventually. (Google EM research and you’ll see, I’m not going to go into it here.)

Since AJ hadn’t learned the basics, she couldn’t catch on to the next spiral months or a year later.

She believed she was stupid.

Conversely, students who excelled in math weren’t challenged at their ability level and were bored. Herein lies a big problem with Everyday Math —  it teaches to the middle so you hit the middle kids and leave out the rest.

An Everyday Math trainer told my friend that it must be because the teachers were incorrectly implementing the curriculum.

Is the curriculum that easy to mess up?

I don’t think so.

In a recent phone conversation, Audra Haskins, Director of Lower School at Aspen Academy in Colorado, explained this about Everyday Math, “It doesn’t go deep; there’s not a lot of repetition, review, or application.”

A teacher friend of mine from Twitter added, “The material jumps around so much that mastery is not achieved on any level (at least in second grade.) It doesn’t make sense. I hate it! I am worried about the future of my students because I felt like I didn’t teach solid math this year.”

Investigations is another curriculum in the New Math genre.

Haskins said, “Investigations is designed to assume the kids are good at math and know the skills and apply them. If kids don’t know it, they’re never going to get there.”

Mom of eight and blogger, Gretchen White commented on Facebook, “I LOATHE Investigations. I’ve ranted about it extensively. It’s the main reason we left our former school. I remember our 2nd grader having to count the pockets in our family for homework one night and I realized it was failing him as a mathematician. I’ve been happy with Saxon, although I know there are plenty of Saxon critics. It seems like “real” math, for lack of a better word.” 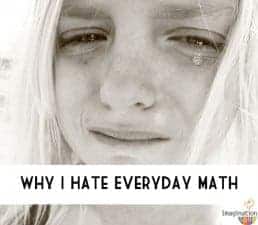 We moved schools to one with a FANTASTIC math curriculum — Singapore Math. It goes deep into twelve concepts and teaches to mastery (meaning that kids learn it before moving to a new concept.) Tomorrow I share my happy experiences with Singapore Math. 🙂

What does your school use for math? Or homeschool? What do you like or dislike about it?

16 Books To Read Before Kindergarten