Put on your Willy Wonka top hat and try some scrumdiddlyumptious Charlie and the Chocolate Factory candy experiments. We did and it was epic fun! 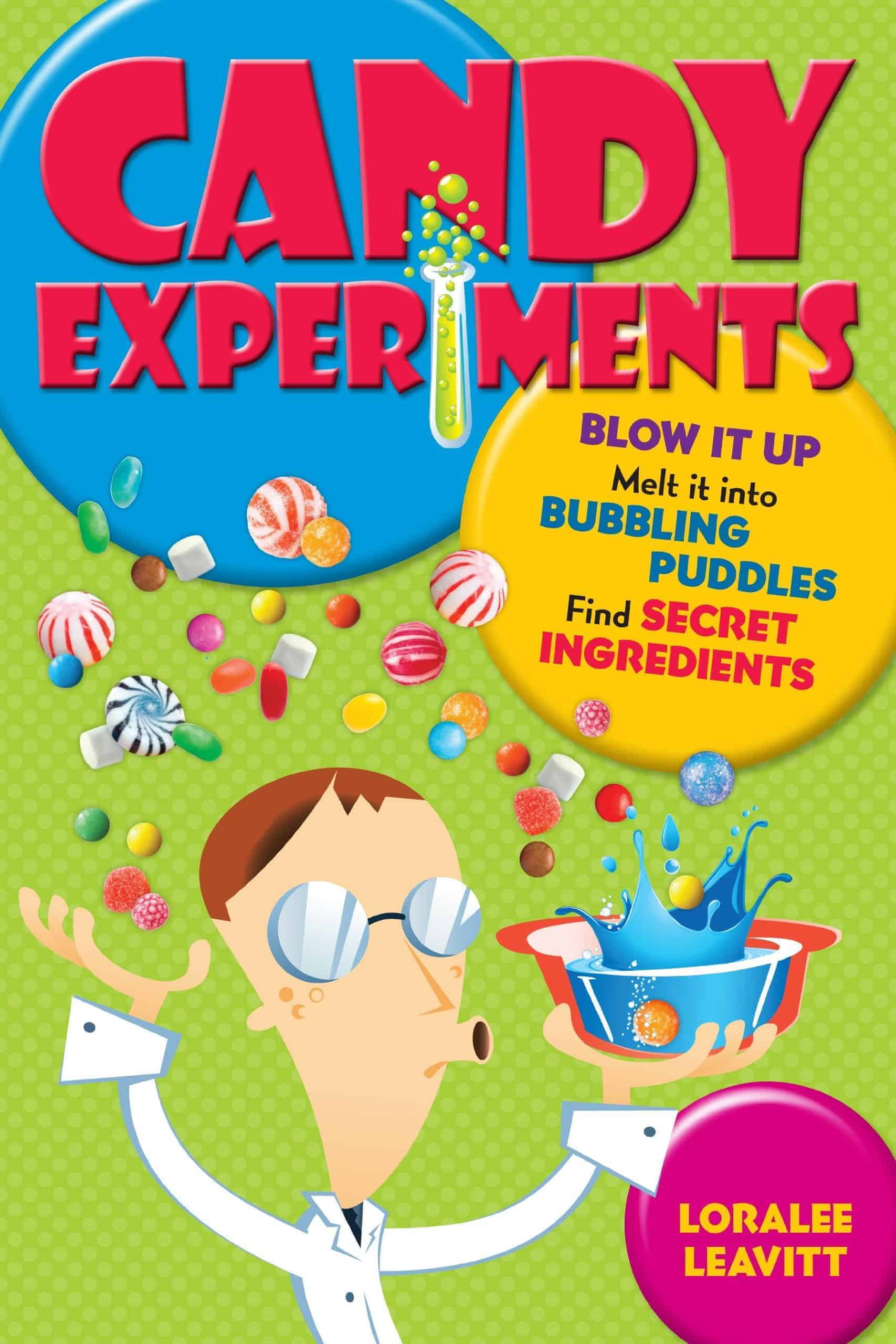 We found experiments and ideas in a fantastic little book called Candy Experiments by Loralee Leavitt. I appreciated that Candy Experiments explained the science behind each experiment. And, I liked that the explanation wasn’t too technical. (Which is my frequent complaint with other science experiment books.) We learned more about density, dissolving, stickiness, and secret candy ingredients — among other things. Here are a few candy experiments we did that you can do, too.

“No other factory in the world mixes its chocolate by waterfall.” – Willy Wonka 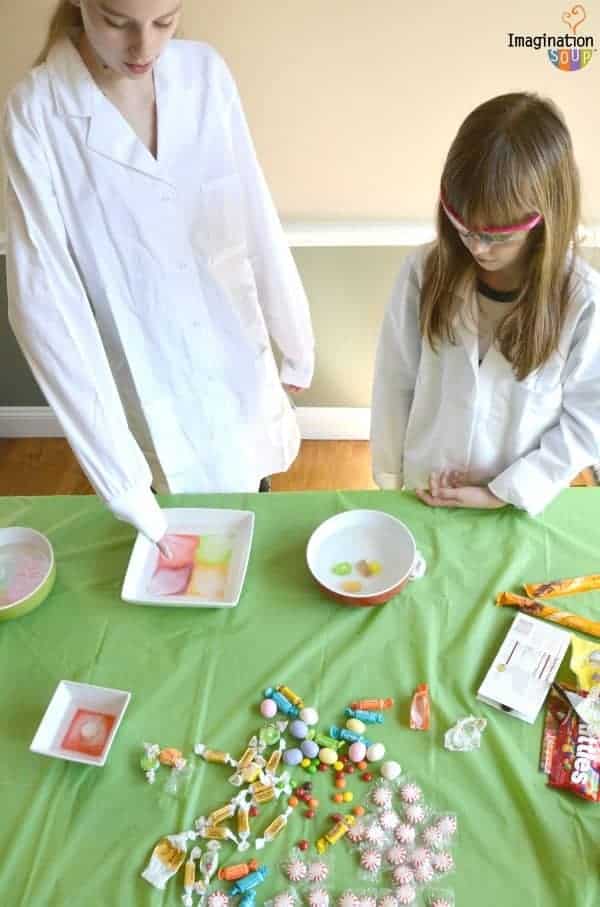 “Little surprises around every corner, but nothing dangerous!” – Willy Wonka

Check out the air bubbles when you try this with taffy or other candies — it’s the secret ingredient. Air! Air bubbles make the candy soft and change the color of the candy.

Candies that float have lots of air trapped inside them. Candies such as marshmallows, Whoppers, and Three Musketeers will float.

Other candies just sink straight to the bottom of your water. This is a great experiment for younger kids!

Candies that usually sink will float if you change the shape. Your goal is to make the shape push aside enough water to float — which is the same concept as why a heavy boat floats. Take your square taffy and flatten it into a bowl or boat. It’s a bit tricky but helps explain the scientific principle behind it.

“I am the maker of music, the dreamer of dreams!” – Willy Wonka

Have you ever thought about what dissolves? Chocolate doesn’t dissolve, but sugar does. So, those sugary candy fillings inside chocolate coatings dissolve in water leaving behind a hollow shell. 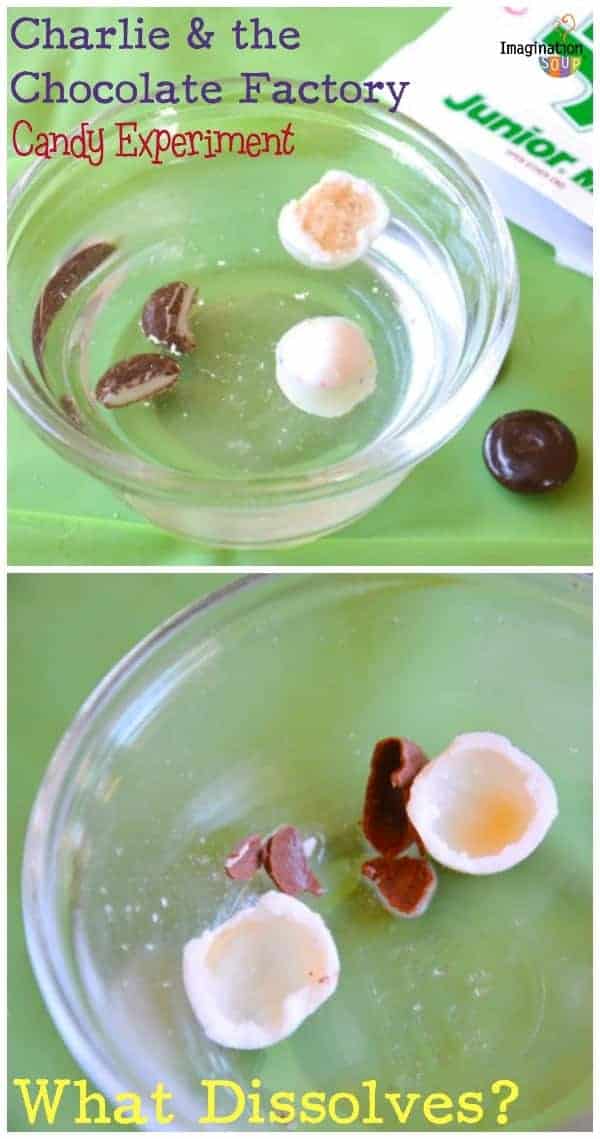 The Density of Sugar and Water?

“Rainbow drops – suck them and you can spit in six different colours.” – Willy Wonka

You can make colored stripes of water with this experiment. What happens is the sugar water is denser than the regular water so it sinks and spreads out before it eventually mixes with the regular water. It’s cool, right? 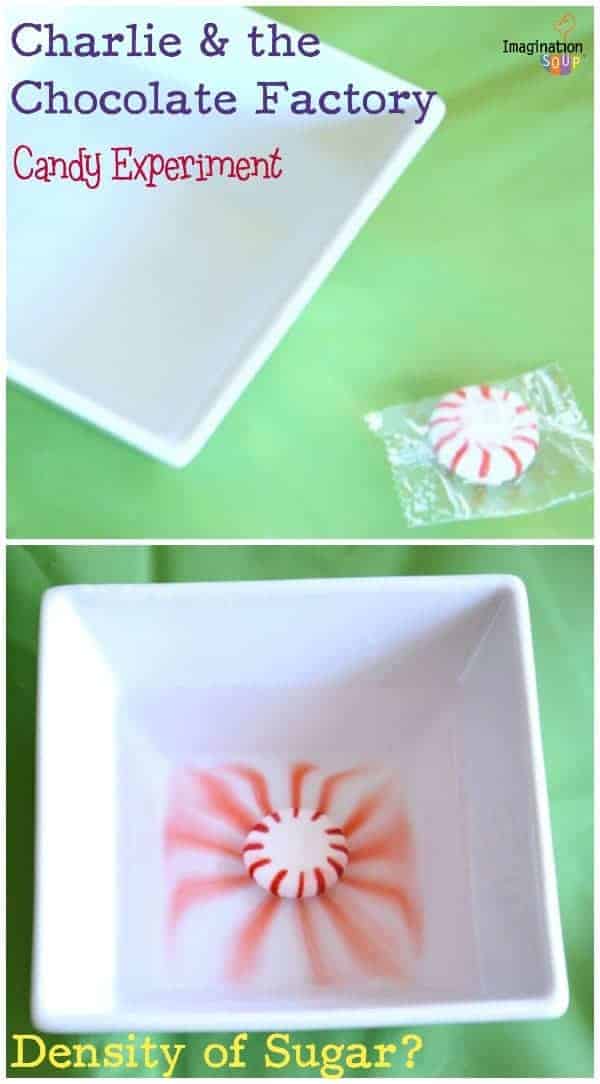 What is the Stickiest Candy?

“Whipped cream isn’t whipped cream at all if it hasn’t been whipped with whips, just like poached eggs isn’t poached eggs unless it’s been stolen in the dead of the night.” – Willy WonkaExperiment with candy stickiness by making candy sculptures. Stickiness depends on the warmth and how much water and oil is in the candy. We discussed how the stickier the candy, the more likely it is to cause cavities.

Experiment with candy stickiness by making candy sculptures. Stickiness depends on the warmth and how much water and oil is in the candy. We discussed how the stickier the candy, the more likely it is to cause cavities.

Stickiness depends on the temperature of the candy and how much water and oil are in the candy. It’s important for kids to know that stickier the candy, the more likely it is to cause cavities and ruin braces. 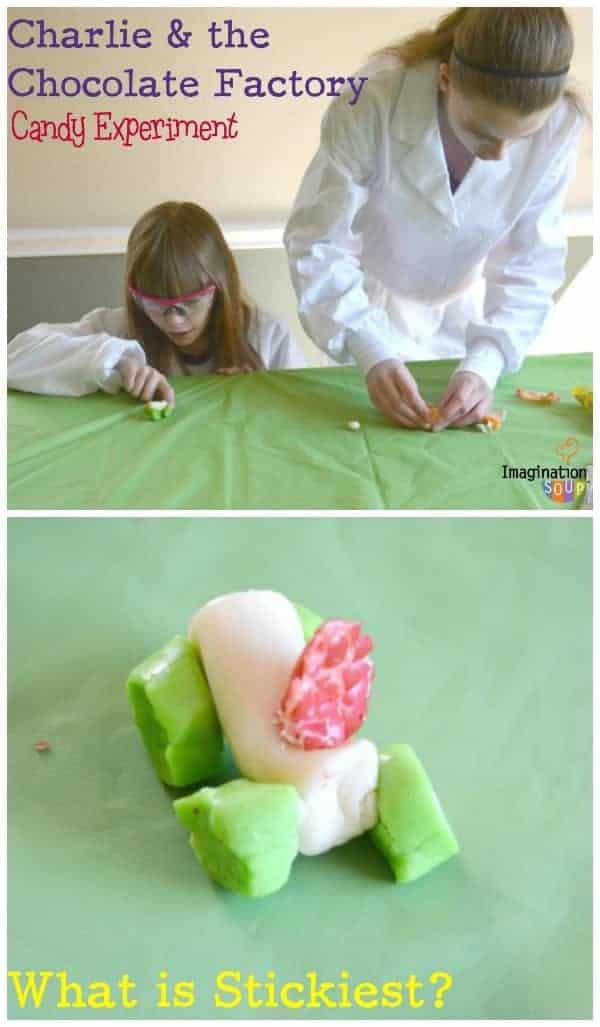 Make Your Own Candy

“Mr Willy Wonka can make marshmallows that taste of violets, and rich caramels that change colour every ten seconds as you suck them, and little feathery sweets that melt away deliciously the moment you put them between your lips. He can make chewing-gum that never loses its taste, and sugar balloons that you can blow up to enormous sizes before you pop them with a pin and gobble them up.” – from Charlie and the Chocolate Factory, Roald Dahl

This activity wasn’t in the Candy Experiments book, I just thought it would be interesting to experiment with our own concoctions. (So Willy Wonka of me!)

The girls put together pieces of candy which we baked. I started at 200 but then turned up the oven to 350. I had no idea what we were doing. We learned that too hot burns some candy (chocolate) and melts others (Skittles.) It tasted dreadful.

Next time we’ll experiment with candy ingredients and not pre-made candies. 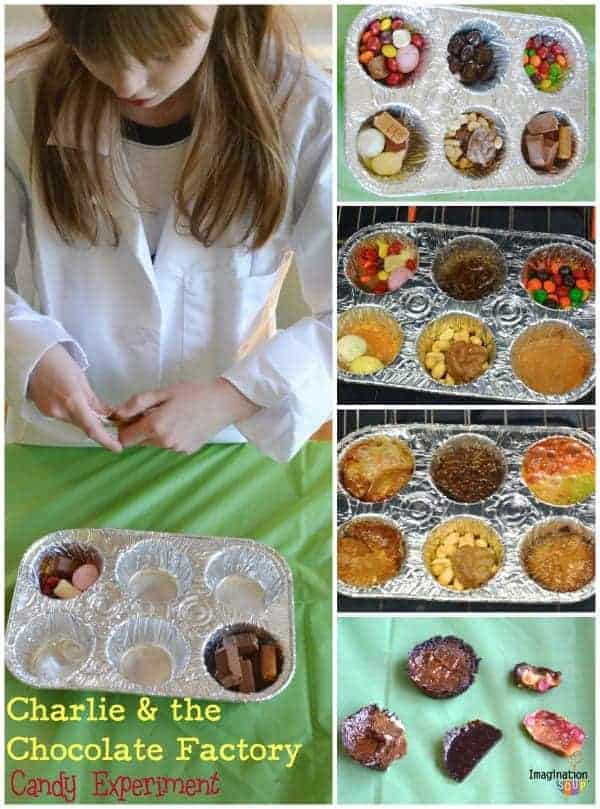 Do you have leftover candy from Halloween, Christmas, Valentine’s Day, or Easter? (Or is that just my kids?) Now you know what you can do with those candies besides dump them. Try candy experiments! You might like the second book, Candy Experiments 2, for more ideas than the 70 that are in the first book. 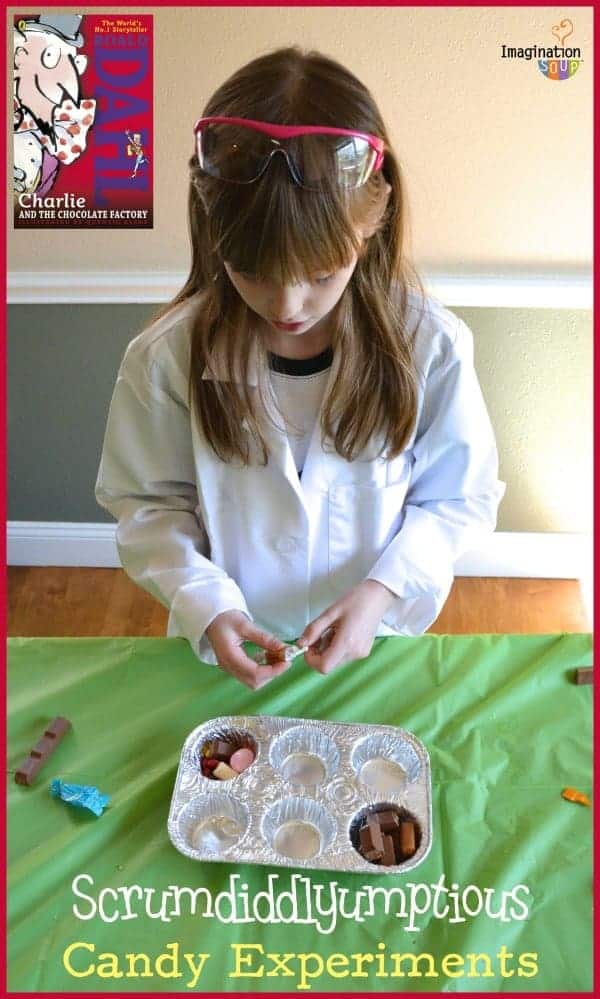 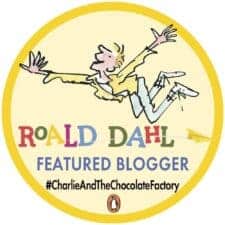 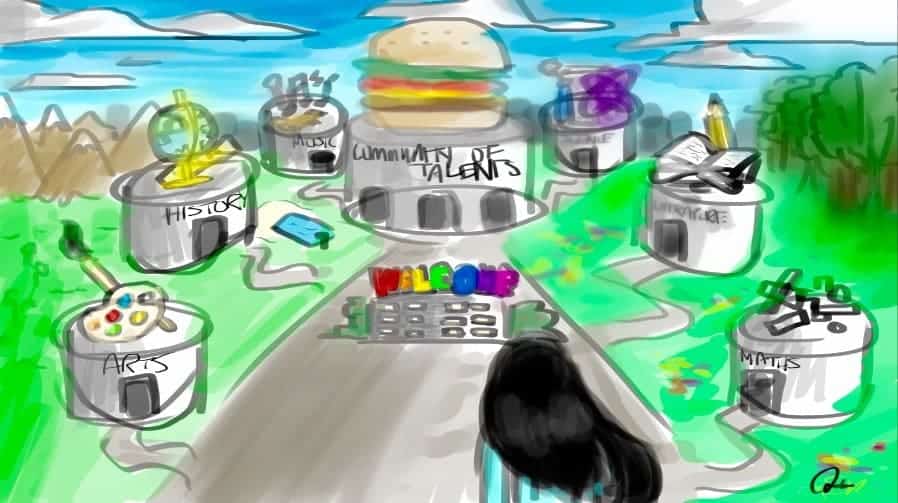