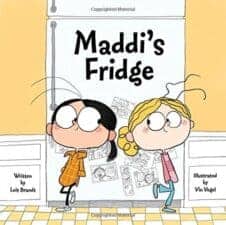 Maddi’s Fridge by Lois Brandt, illustrated by Vin Vogel (ages 4+)
Sofia finds out that Maddi’s fridge has no food but Maddi doesn’t want Sofia to tell anyone. Sofia really wants to help Maddi but how can she? 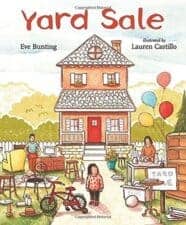 Yard Sale by Eve Bunting, illustrated by Lauren Castillo (ages 4+)
Callie’s family must sell everything to move to a smaller home. It’s sad but this family faces the change with courage and love. 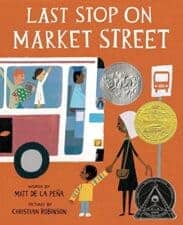 Last Stop on Market Street by Matt de la Peña, illustrated by Christian Robinson (ages 4+)
CJ and his grandma ride the bus across town and CJ notices differences about the neighborhoods. Caldecott winner! 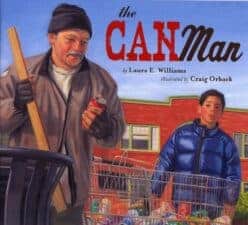 The Can Man by Laura E. Williams, illustrated by Craig Orback (ages 4+)
Tim starts collecting the cans that the Can Man normally collects. Tim’s taken the homeless man’s only way to make money and he realizes some big truths. It’s a powerful story that shows Tim realizing the world doesn’t revolve around him and that his actions have consequences. 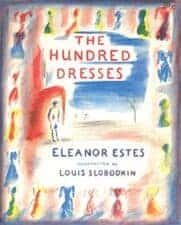 The Hundred Dresses by Eleanor Estes (ages 6 – 9)
Classmates including Maddie tease a girl in their class, Wanda, who says she has 100 dresses at home. When Maddie visits Wanda’s house, she discovers the bittersweet truth — she might not have real dresses but she has drawings of 100 dresses. This is a book that will teach kindness and empathy.

Almost Home by Joan Bauer (ages 8 – 12)
A great teacher, a rescue dog, and a love of poetry help Sugar face the challenges of homelessness. 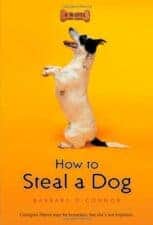 How to Steal a Dog by Barbara O’Connor (ages 8 – 12)
Georgina thinks that she can help get them out of living in their car if she can get the reward money for a lost dog. Now she just has to steal a dog. . . It’s a sweet story with an unexpected friendship that comes to mean the world to Georgina. 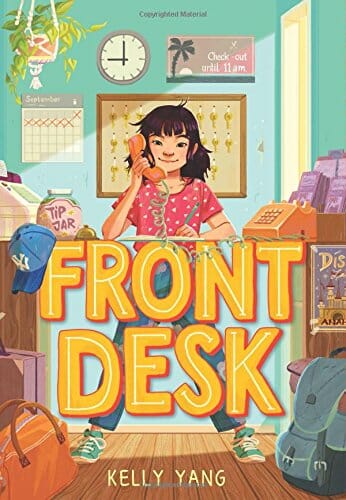 Front Desk by Kelly Yang  (ages 9 – 12)
Mia and her parents have struggled ever since moving to America from China. When her parents take a new live-in job at a motel, they end up working around the clock for very little pay. Mia helps out by working at the front desk. She befriends the weekly tenants and uses her English skills to write letters advocating other people in tough spots— like her uncle whose sweatshop boss has taken his passport and weekly, Hank, who needs a letter of recommendation to get a job. This book is more than a memorable coming-of-age immigrant story, it’s also about tolerance and diversity and as the author says at the end, “what happens when you include [others]…despite all your suffering and heartache…” I loved this story— the writing, the characters, the plot, and the messages of inclusion and determination. Added to: Best Middle-Grade Chapter Books of 2018 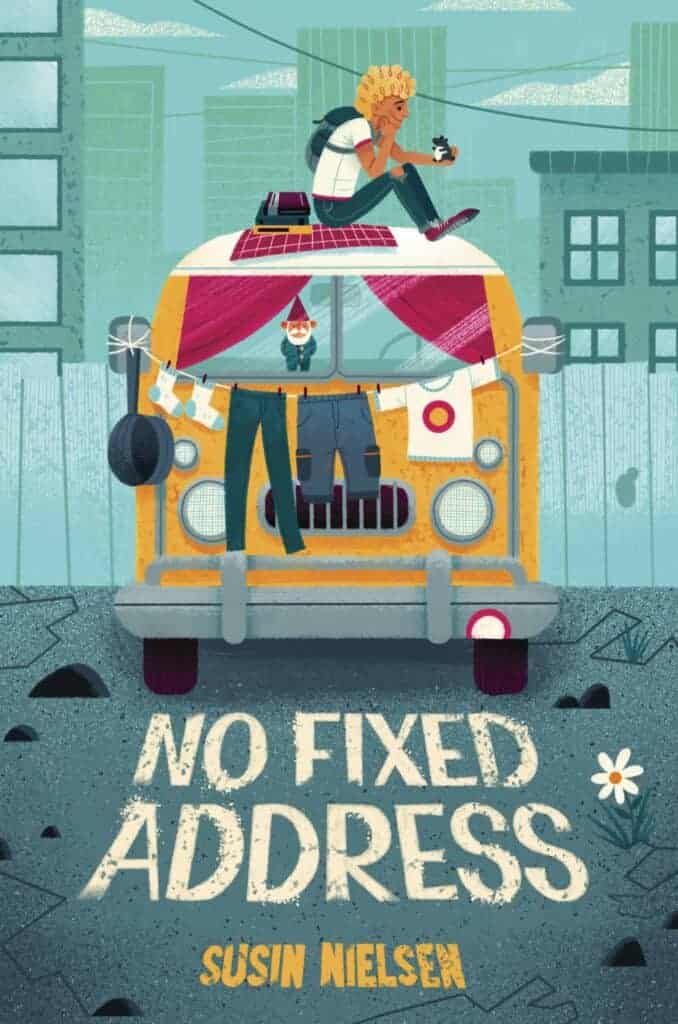 No Fixed Address by Susin Nielsen  (ages 9 – 12)
Felix doesn’t want to tell anyone that he’s been living in a van for months and months. His mom, Astrid, is worried about social services taking him so he keeps quiet even though he really wants a bathroom. His hope is that he can win his favorite TV game show so they’ll finally have enough money to get an apartment. One of the things I loved about this story is how it shows a child’s love for a parent despite all the parent’s flaws–and his mom has many like lying and not holding down a job. It also depicts homelessness as circumstances beyond a child’s control — which is something most kids don’t know or think to consider. This well-written book is beautiful, important, and highly recommended. 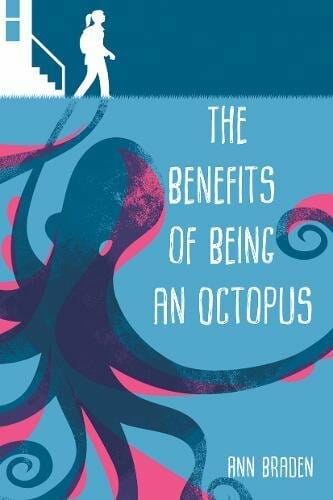 The Benefits of Being an Octopus by Ann Braden (ages 9 – 12)
This is a well-written story with an emotional poignancy about poverty and unhealthy relationships. Zoey is trying to stay hidden to survive her life but it’s not easy. She and her siblings are living with their mom’s newest boyfriend in his trailer. She’s required to care for her siblings while her mom works …all the while avoiding making a mess or any noise. A kind teacher at school persists with a reluctant, non-participative Zoey, encouraging her to try debate club. It’s that activity that eventually gives Zoey the courage and perspective to talk to her mom about everything — from her mom’s boyfriend’s belittling to her own friend getting threatened with a gun. That conversation changes everything for their family for the better…

Okay for Now by Gary D. Schmidt (ages 9 – 12)
One of the best chapter books I’ve ever read whose characters I felt deeply connected to… The main character, Doug, is struggling to read while living in poverty with an abusive dad and older brother. What saves him is connecting to a librarian who shows him Audobon’s bird paintings and how to draw. It’s excellent!!!!

Just Under the Clouds by Melissa Sarno (ages 9 – 12)
This is a coming-of-age story about what makes a home, family, and friends. Cora is responsible for her little sister, Adare, while her mom works. Cora loves climbing and trees but doesn’t love not having a home or any friends. When their mom takes them to stay with an old friend, it finally feels like a home. And she makes a friend at school, one who understands what it’s like to not have a permanent home because she lives in a houseboat. Moving and well-written.

The Bridge Home by Padma Venkatraman (ages 9 – 12)
Set in India, Viji writes this story as letters to her little sister Rukku who has intellectual disabilities starting with when they run away from an abusive father and sick mother to the big city. There, they meet kind brothers and live with them under a bridge, scrabbling to survive by collecting trash. Their days are hard but Viji learns how much more capable her sister is then she previously thought. Unfortunately, her sister Rukku gets a terrible cough and fever. Viji might need to trust someone to get Rukku help. It’s an honest, eye-opening story that reveals the plight of many homeless children in India.

The Junction Between Sunshine and Lucky by Holly Schindler (ages 8 – 12)
Auggie worries that her town’s beautification committee will condemn her grandpa’s unusual house of repurposed objects. 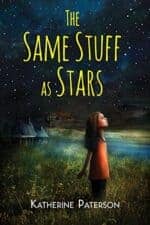 The Same Stuff as Stars by Katherine Paterson  (ages 8 – 12)Angel’s mother abandons Angel and her brother at their ancient great-grandmother’s run-down trailer home. Making things more bearable is a mysterious neighbor who teaches Angel about constellations, sparking a passion for astronomy. Another amazing story from Paterson. 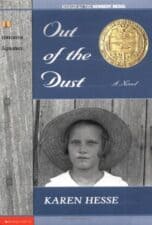 Out of the Dust by Karen Hesse (ages 8 – 12)
They’re dirt poor, her mother dies, her father is sick, and the constant dust storms cover the world. Billie Jo narrates it all in free verse and manages to find the grit to keep going. 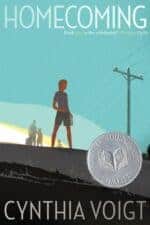 Homecoming by Cynthia Voigt (ages 12+)
I read this series in high school & love that it still is relevant today. Dicey’s mom abandons she and her three siblings at a mall forcing the kids to forage for food, hide, and keep going onward as they try to get to a safe place, their great-aunt’s home. 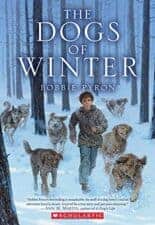 The Dogs of Winter by Bobbie Pyron (ages 8 – 12)
Abandoned at age five, Ivan’s forced to live on the streets. He lives with a pack of dogs, becoming almost as feral as his pack. Like many books on this list, this is pretty sad to imagine how hungry his days are and how much he has lost but it is very worth reading. 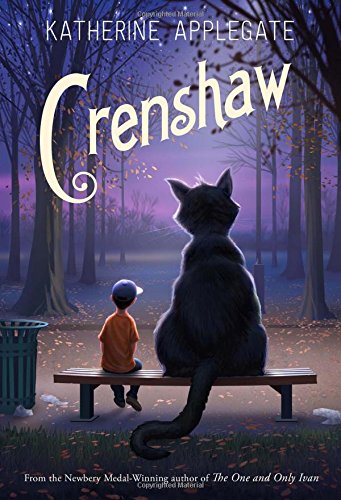 Crenshaw by Katherine Applegate (ages 8 – 12)
After having lost their home and living in their van for 3 months, the family is now about to lose their apartment. It isn’t until his imaginary friend Crenshaw shows up and pushes Jackson to speak the truth to his parents that Jackson learns that he’s not facing these challenges alone. 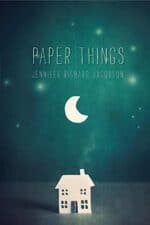 Paper Things by Jennifer Richard Jacobson (ages 8 – 12)
Gage and his little sister, Ari, are moving from one friend’s couch to another, trying to save up enough money for their own apartment. Ari wants to stay with her brother, go to school, do homework, and have enough to eat. But will they make it on their own? Bittersweet and heart-wrenching.

Trash by Andy Mulligan (ages 8 – 12)
Survival means picking through piles of trash. Until Raphael finds something making him determined to fix the corruption and injustice in their city. 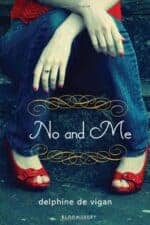 No and Me by Delphine de Vigan (ages 12+)
Lou meets No in Paris while researching homeless teens and No moves in with Lou’s family. Their friendship provides an insightful look into family, homelessness, and friendship.

Sorta Like a Rock Star by Matthew Quick (ages 12+)
Amber and her alcoholic mom live in the yellow school bus that her mom drives. Usually Amber is a rock star of hope but after a fatal tragedy, Amber loses hope and faith. 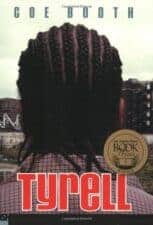 Tyrell by Coe Booth (ages 12+)
He’s living at a homeless shelter and feeling worthless. Certainly, he’s not worthy enough for his girlfriend or staying on the straight and narrow.

Are there any other children’s books about poverty that you recommend for this list? 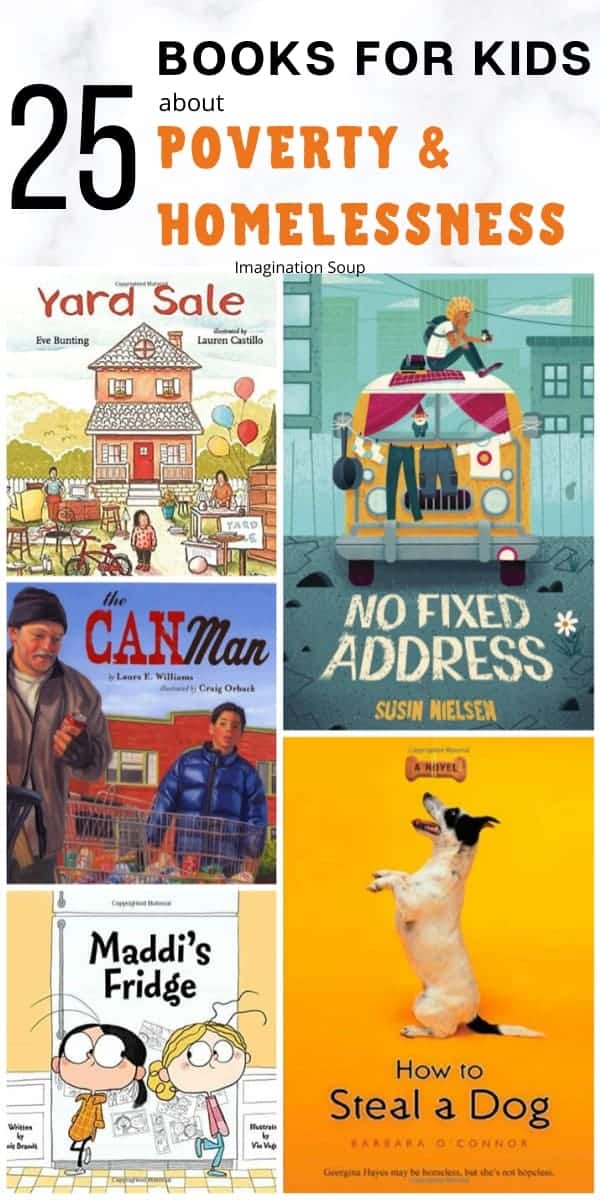 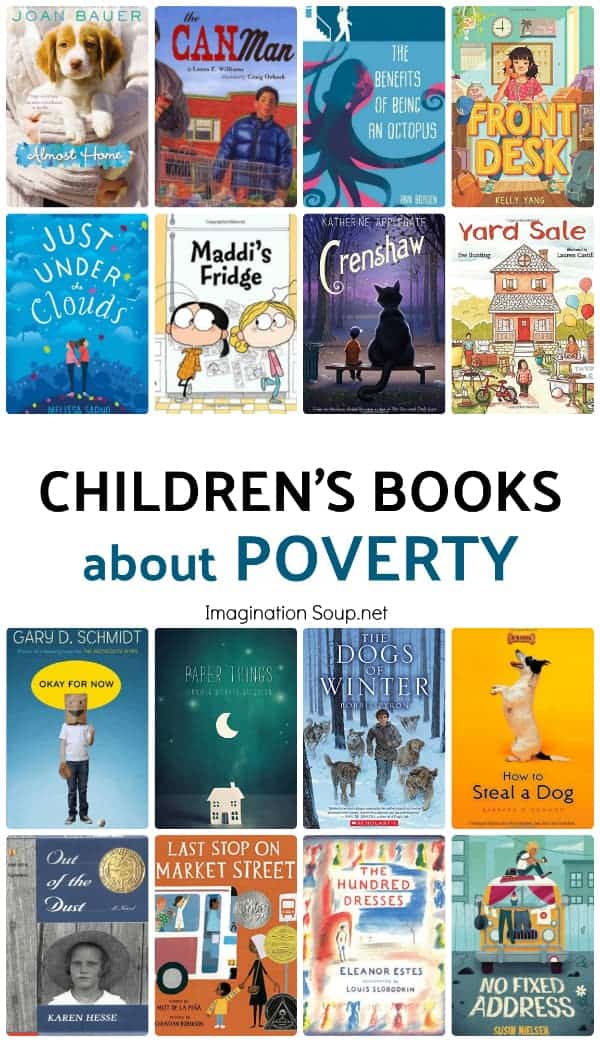