Do you talk about race and diversity?

I have mixed feelings about the app, “Who Am I?”.  Is it a way to encourage racism and labeling or a chance to begin teaching our children about identity and respect?

I decided to get more information from the app’s creator, Michael D. Baran, PhD, a cultural anthropologist at Harvard University.

Do you talk about race and diversity? 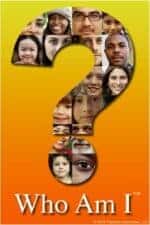 Baran: The “Who Am I? Race Awareness Game” app is a seemingly simple “guess who” type game using real pictures representing a diversity of people. The adult sees a screen with 12 or 24 pictures, and they pick one, without the child seeing which one. The child then takes control – asking questions about the people and eliminating choices by touching the pictures on the screen. They may ask, “Is it a boy?” or “Does the person have dark skin?” As parents quickly see, when real people are used for this game, there is no clear-cut way to ask if someone is “black” or “white” since skin colors come in a spectrum of colors. So, for the parents, we provide practical tips they can read that give short little suggestions for talking about race and diversity to children during this game and beyond. Then at the end of the game, after a guess has been made, the adult and child get to see how the person racially self-identifies and they can read a quote from that person. 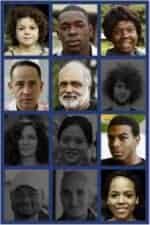 I.S.:What do you hope happens for families by playing the Who Am I app?

Baran: There are three main goals for families playing this app. First, I hope that parents will start to become more comfortable talking about race and diversity. Research shows that (especially white) parents are extremely uncomfortable talking about these subjects. Because of that, their children end up learning about race from other places, where it is more likely they pick up on stereotypical ways of thinking that are harmful in the long run. The tips that the app provides give parents a starting point for this. Second, I envision this game building a dialogue between parents and children about the critical issues surrounding identity. Children are curious about these issues from as young as three-years-old, but they also notice that it is a taboo subject that they can’t bring up with adults. Having adults openly talk about these issues with their children will show kids that they can talk to adults when confusing or unjust issues arise. And third, we hope that by having children learn about the ways that other people think about race and identities, they will become more curious and empathetic. This is critical if we want our society to move beyond the current status quo where inaction rather than over racism leads to continuing inequalities and injustices. 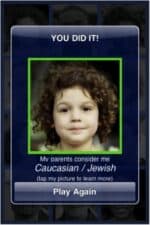 I.S.: This app has parents and kids openly talking about a person’s ethnic background. Isn’t this kind of labeling something we shouldn’t be encouraging?

Baran: What we shouldn’t be encouraging is looking at someone and making assumptions about them because of the way they look. This app does something very different. It encourages parents and kids to listen to how people identify themselves and to better understand why those categories are important for their identity. We cannot pretend that we live in a world where race and ethnicity are not critical ways that people think of themselves. But we can be more open to letting people define themselves and respecting their histories and cultural practices.

I.S.: What if a child does this game by themselves, do you think that they will miss the point?

Baran: This is inherently a two-player game, so it does not work to play alone. Certainly two older kids can play without an adult, and I have seen my own two kids (ages 6 and 7) playing together. Of course two kids will not get everything out of the game that an adult and a child would get. However there are subtle ways that the game will still be helpful. Just having to look carefully at the spectrums of difference relating to skin colors and hair textures and facial shapes is enough to show children that there are no clear-cut racial categories – that these are not “natural” categories, but rather social conventions that inaccurately capture the wide diversity of human physical features. This intuitive understanding that can be really powerful for children to learn on their own in this game context. 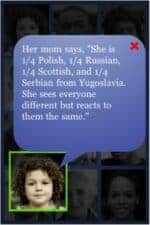 I.S.: What age range is this appropriate for?

Baran: This game is optimally designed for children age 3 to 10, but can also be fun for children even older than that. And because it has many unexpected benefits for parents as well, it’s really a game for all ages! In fact, I have had adults tell me that they were checking it out, playing without children, and they ended up having fascinating conversations stimulated by the game.

I.S.: This game reminds me of Guess Who? because it incorporates deductive reasoning. Do you anticipate other benefits of playing this game besides the discussion around race?

Baran: Yes, just like the board game Guess Who, this game works on deductive reasoning skills. That is certainly a benefit. But the innovative, original benefits are in influencing the way that children construct the knowledge structures of social identities that will underlie much of their thinking about these issues for the rest of their lives. And the benefits are not limited to race. This game encourages discussion of many categories of identity that intersect with race, such as ethnicity, nationality, language, gender, religion, and culture.

I.S.:What are some other ideas you have for parents of children under ten to continue the dialogue about race?

Baran: The main idea – that parents should talk more openly and actively with kids about race – can be extended to all facets of life. For example, parents should watch movies and TV shows with their kids sometimes. During these times, they should foster a habit of active viewing, stopping the action sometimes to point out interesting or problematic things. Look for a longer article I’ve written on this subject for the November 2010 issue of Parent and Child magazine. 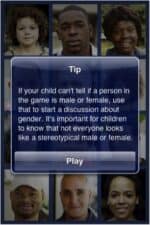 In addition to media, parents can foster the spirit of curiosity and respect by going to different types of cultural festivals with their kids, learning more about countries and peoples in the news, etc. Parents will be surprised to see that when they open the door to these discussions, children will be even more curious and ask more questions about what they see in the social world around them.

I.S.: Anything else you want to add?

Baran: Race is a sensitive subject, for a good reason. But the only way we are going to progress as a nation is if we break out of routine ways of thinking about race. This game, as well as my other app “Guess My Race,” are designed to do just that by integrating art, technology, and game play with learning about complex and confusing issues. Anthropologists, psychologists, sociologists, and historians have produced fascinating research on the issues of race and ethnicity, but they have traditionally done a poor job of communicating those ideas to a wider audience. It’s time to change that, and this game hopefully represents the kind of innovative thinking scholars can do to take their theoretical findings and use them for practical change.

Bio: Michael D. Baran, PhD is a cultural anthropologist teaching at Harvard University.  As Director of Cambridge Diversity Consulting, he also helps businesses and schools consider how to better teach about diversity issues in a fun, educational way.

Melissa’s Note: Okay, readers, what do you think?

My  Son Isn’t  Sick; He’s Different and So Are You

The Best Dinosaur Books for Kids