22 History and Geography Apps for Kids

AJ’s been playing The Oregon Trail on the iPad so I figured it’s time for a round-up of history and geography apps. We haven’t tried them all but I’ll asterisk the ones we’ve tried and tell you what we thought.

History and Geography Apps for Kids 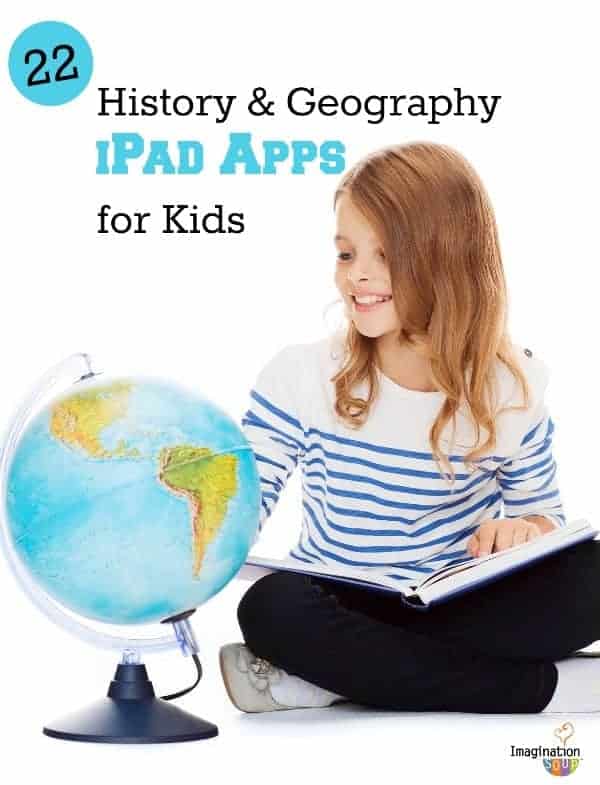 Stack the States
Learn state capitals, shapes, geographic locations and more, you can actually touch, move and drop the animated states anywhere on the screen. Carefully build a stack of states that reaches the checkered line to win each level.
* Very fun and better than Stack the Countries.

Barefoot World Atlas
An interactive 3D globe for iPad that invites children to explore the regions and countries of the world, discovering hundreds of fascinating features and immersing themselves in the rich wonders of our planet.
* Amazing illustrations and interesting content.

U.S. Geography by Discovery Education
Play the games, watch the videos, take the challenges, compete against your friends and with others worldwide, become an expert in U.S. Geography.

United States Puzzle
United States puzzle map game will help you to learn the map’s shape and name of every state. In main game, touch state map you can see the full name

Learn the States
Take the ultimate road trip throughout the 50 United States while engaging in brilliant, animated activities to test your knowledge of state shapes and statistics.

Oregon Trail
Assume the role of a wagon leader in a side-view journey where your strategic decisions must ensure the safety of your party along the treacherous Oregon Trail.
* The huge bummer about this app is that to really experience the full game, you’re required to pay more money. We haven’t. So far, AJ still doesn’t mind losing and enjoys playing it.

Ansel and Claire American Bowl
This is both a history and geography quiz made fun as a game of bowling. Great app.

Ansel and Claire Paul Revere’s Ride
Ansel and Claire apps make learning fun! We love them. Learn about the American Revolutionary War as you travel with Paul Revere. *a fun way to review and learn this part of history! This is a great app.

This Day in History World Book (free)
An interactive calendar with significant historical events that took place on the current day or any selected day.

Virtual History Roma
A fantastic voyage to Ancient Rome, the capital of the largest empire in the ancient world, which has been reconstructed in virtual form and which you can explore in a “full-immersion” panoramic experience.

Writing the Stories I Looked for as an Asian American Reader