If you’re like me, you will want to read these middle-grade nonfiction books and then recommend them to the young readers you know.

Rocket to the Moon: Big Ideas That Changed the World by Don Brown
Instead of reading a narrative nonfiction book, get your fact-filled history about the first moon landing in an exciting, well-written, black-and-white graphic novel. Reading this book will help you understand our country’s competitiveness with Russia, the many attempts to launch rockets, and the eventual success of sending astronauts into space. I’m happy to see this new “Big Ideas” graphic novel series with a home-run first book. 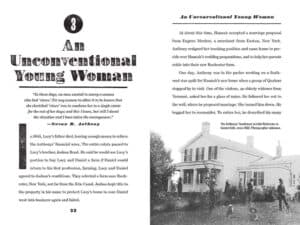 The Making of America: Susan B. Anthony by Teri Kanefield
I LOVE this book — because it really made me appreciate the rights that I take for granted. Not to mention, it made me admire the perseverance and dedication of Susan B. Anthony who worked tirelessly to advocate for women’s rights and the rights of African Americans. Anthony was raised as a Quaker and highly educated which was rare for girls at the time. She even went to seminary for a short time until her family’s financial situation changed her direction. She taught children for awhile then focused her work on opening people’s eyes to two groups of people who needed equal rights: black people and women. Because imagine being a person with no rights who could be exploited and could do nothing about it!? It was also really interesting to read how these two groups worked together advocating for their rights until they disagreed about who should get rights first. Anthony was right in her prediction when she said, “We shall someday [have our amendment] — everybody will think it was always so, just exactly as many young people think that all the privileges, all the freedom, all the enjoyments which woman now possesses always were here. They have no idea of how every single inch of ground that she stands upon today has been gained by the hard work of some little handful of women of the past.” We do take her work for granted. Women can own property, vote, divorce abusers, have custody of their children, and are citizens because of the efforts of Susan B. Anthony and others. I hope this book becomes required reading for middle schoolers — both boys and girls. It’s also beneficial for kids to know how much one person can do to make a difference in the world 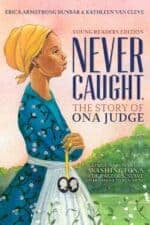 Never Caught, The Story of Ona Judge: Young Readers Edition by Erica Armstrong Dunbar and Kathleen Van Cleve
This is not just an important story based on the true life of an escaped slave of George Washington’s, it’s also a cautionary tale about idealizing people you don’t know. Because people, as it turns out, are deeply flawed… George Washington included. It is a VERY well-written narrative nonfiction book but, to be honest, I felt sick reading about the world into which Ona was born and raised…and that George Washington owned human beings. The authors set the scene and context of the world into which Ona is born. At age 10, Ona becomes Martha Washington’s personal slave. After 13 years of this thankless work with no pay, no days off, no freedom to have a feeling,…many of those years in Philadelphia, Ona learns that Martha plans to send Ona as a “gift” to Martha’s unkind granddaughter. Ona escapes north with the help of other freed slaves living in the city. Washington is so mad he wants to break his own law —the fugitive slave act— by capturing her without a trial and returning her to his wife. But that doesn’t happen and even though Ona lives in poverty with many losses, she lives free.

An Invisible Thread: A Young Readers Edition by Laura Schroff and Alex Tresniowski
I want to hug this book because people are amazing. Its message of kindness, trust, and friendship renews my faith in humanity in a BIG way. It’s a must-read, must-own, must-discuss true story. Laura first meets Maurice when he’s 11-years-old and begging on the street corner. First, she walks away. Then, she returns and says she’d like to buy him a meal at McDonald’s but has one condition– that she gets to eat with him. He is always hungry so he finds Laura again and she takes him to dinner again. We learn that there is never any food at his apartment, a lot of people living there including uncles and sisters, and a mother whose alcoholism means she’s not a reliable caretaker. Laura makes a commitment to Maurice and they eat dinner together every Monday. For YEARS. Laura also packs him lunches for school and buys him outfits because he only had owned one dirty pair of sweatpants and a sweatshirt. (Which was yet another reason not to go to school.) What I like so much is how Laura treats Marice with respect and friendship — never, ever pity. She makes their time together educational, too — cooking from a recipe, sharing a Christmas experience for the first time, and things like that. Marice is an adult now with his own family and is still close friends with Laura. WOW! 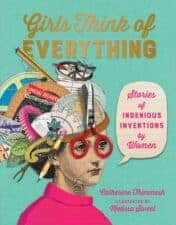 Girls Think of Everything Stories of Ingenious Inventions by Women by Catherine Thimmesh, illustrated by Melissa Sweet
I really loved this expanded and revised edition because Melissa Sweet’s design and illustrations make the book so special. The author writes the biographies like a fictional narrative story with action and suspense but it’s all true. These biographies are about women who solved problems by inventing the solution. What great models for entrepreneurs, inventors, and having a growth mindset.

Heroes of Flight Who Changed the World (Graphic Greats) illustrated by Jade Sarson, consultant editor Dan Green
Heroes of Space Who Changed the World (Graphic Greats) illustrated by Charli Vince, consultant editor Emily Sohn
Heroes of Science Who Changed the World (Graphic Greats) by Dave Shepard, illustrated by Emily Sohn
Heroes of Discovery: Who Changed the World (Graphic Greats) illustrated by Pete Katz and Sarah Skeate, consultant editor Dan Green
In general, these four new graphic novel books from Quarto Press are very white, male European/American-centric. (The space book does have two Russian and one Japanese — all three are men though.) I see the occasional female but the choices of biographies are lacking in representation which is in this day and age is bizarre — we need to do better than this. Does the world need more biographies about Tesla and the Wright brothers!? Not in my opinion. That being said, these graphic biographies give readers an alternative format (graphic novels) of the history and important information about inventors and scientists who made contributions to the world. Perhaps these would be useful for kids who prefer a graphic novel format for whatever reason and need to do research on a famous person. I hope any future books in the series include famous people from around the world and more women. 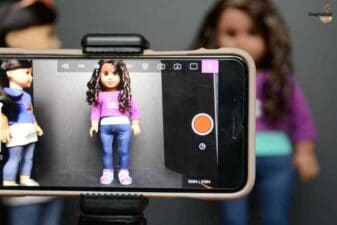 Out of This World Superhero Books for Kids 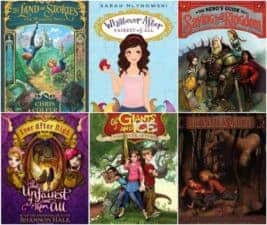