If your kids like to read graphic novels, they’ll want to check out this selection of spring 2017 titles.
Of course, if you want even book ideas more, visit my best graphic novels for kids page.

Check Out These Spring 2017 Graphic Novels 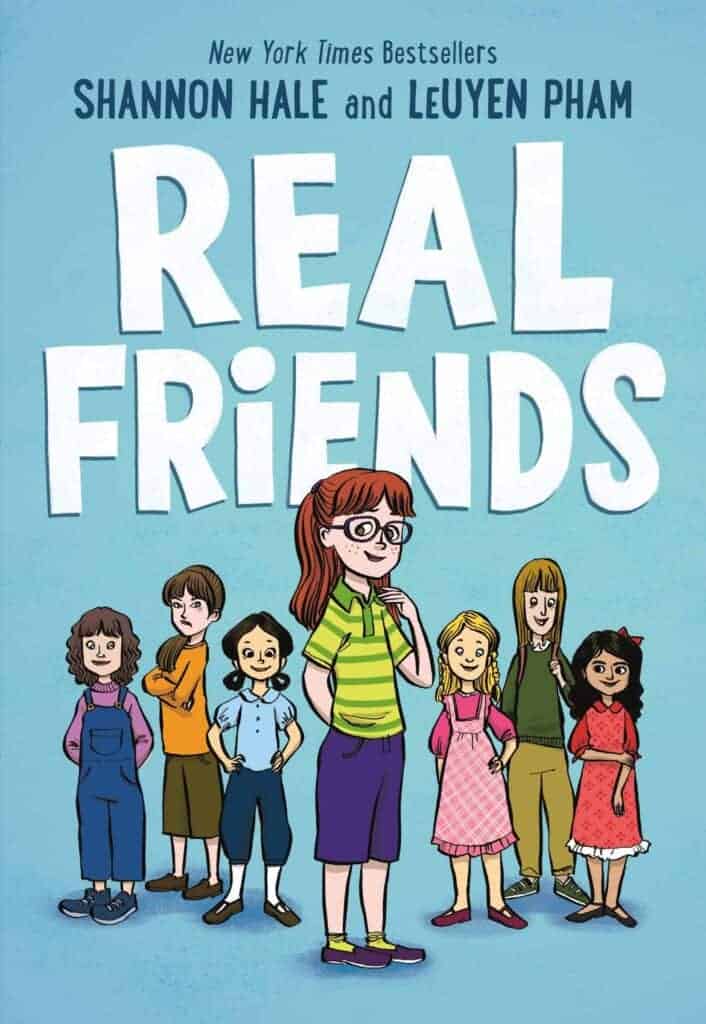 Real Friends by Shannon Hale (ages 8 – 12)
Kids will relate to the ups and downs of Shannon’s friendship in elementary and middle school in this true-to-life graphic novel with incredible artwork. We see Shannon struggle with friends, the popular girls, and even her own behavior. As she grows, we also see her discover her passion — using her big imagination to make up stories! (And since I’m a huge fan, I’m so glad she did!) 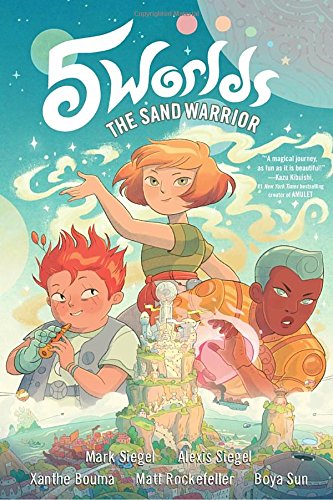 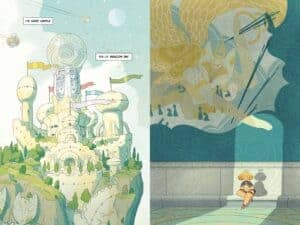 5 Worlds: The Sand Warrior by Mark Siegel, Alexis Siegel, Xanthe Bouma, Matt Rockefeller, and Boya Sun (ages 8 – 12)
Gorgeous artwork sets the tone for an otherworldly story. The five world’s are falling into chaos. When one world attacks another, Oona Lee, a girl who is a sand dancer, rescues two boys and the three determine to light the unlit Beacons and save the worlds. But, they face a dark force that comes with a devastating betrayal. See the artwork from 5 Worlds on their Tumblr page here. (I mentioned this on Instagram but this book enticed my daughter with a chronic illness who hasn’t felt well enough to read in months to read!!) 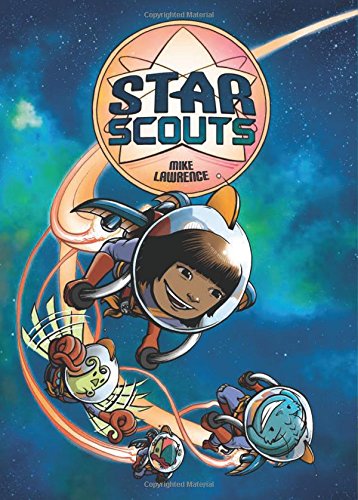 Star Scouts by Mike Lawrence (ages 8 – 12)
Not fitting in and finding your place in the world never was so out of this world! Avani hates her new school and the girls in her Flower Scouts troop who talk about makeup and boys. When she’s accidentally abducted by a friendly alien named Mabel, Avani joins Mabel’s Star Scout troop– a more crazy and adventurous group than her human troop, just like she wants. It’s always important to find your tribe of friends, even if they’re aliens. This is a fantastic romp through space with stunning illustrations. (And also endorsed by my 12-year old daughter!) 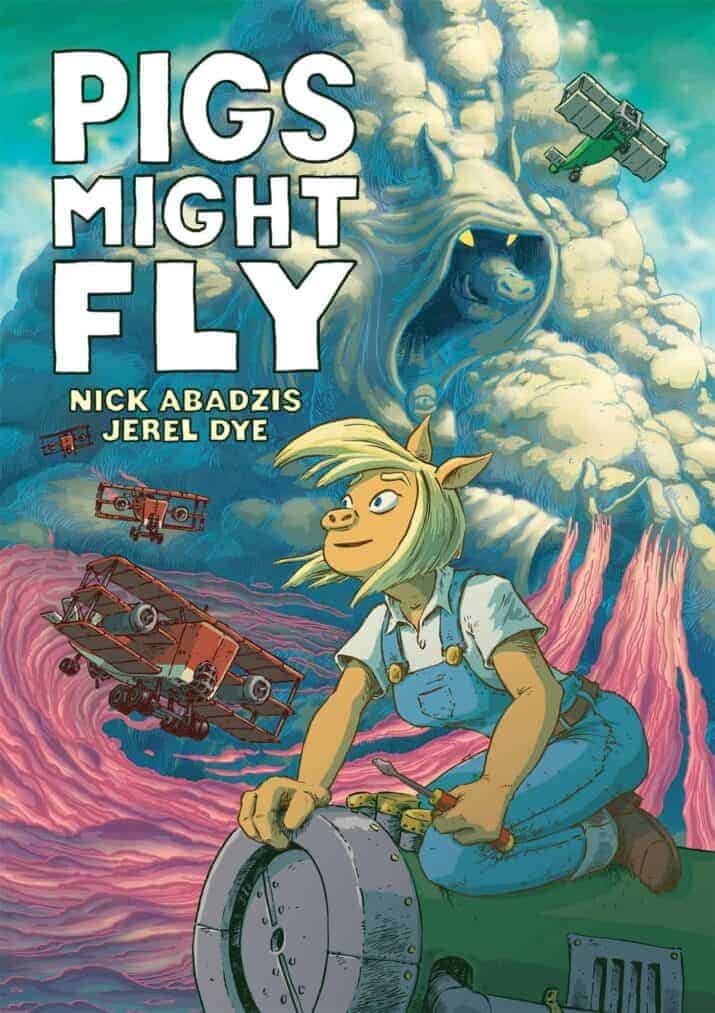 Pigs Might Fly by Nick Abadzis and Zerel Dye (ages 8 – 12)
Lily secretly builds a working flying machine, against her father’s knowledge. And it comes in handy, too, when the Warthogs attack Pigdom Plains. She flies in pursuit of the Warthogs where she discovers her father’s former apprentice out for revenge and seeking power. She also discovers new allies and realizes she if can stop the battle, the two peoples can build bridges of friendship. It’s an entertaining, unique story with a fantastic heroine and an important message. 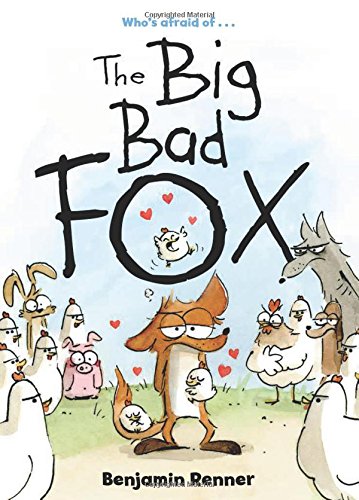 Big Bad Fox by Benjamin Renner (ages 8 – 12)
The fox isn’t adept at catching chickens — until the wolf gives him an idea. Steal a chicken’s eggs. Which does work! Only now the chickens think the fox is their mama. And he’s starting to grow too fond of them to consider them food. I found this story warm-hearted and hilarious, especially as a parent whose own little chickens are both unexpected and amazing. Will kids crack up as much as me? I hope so! 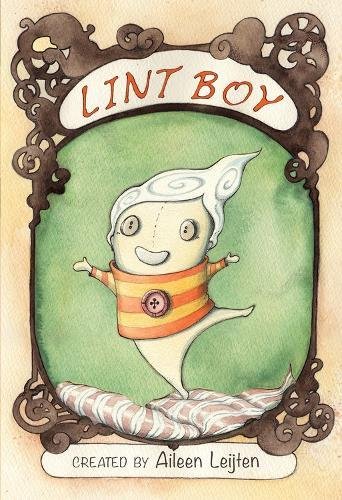 Lint Boy by Aileen Leijten
We’ve all wondered about dryer link, right? (Or, is that just me?) This is a fairy tale type of story about two dryer lint brothers, one who is stolen away by a wicked lady and the other (Lint Boy) who tries to rescue him. The wicked lady hates dolls like the lint brothers and traps them all in cages. Once she captures both brothers, she intends to disassemble the dolls and remake them into monsters. The dolls, led by Lint Boy, escape their cages and, with the help of lost socks, drive the old lady out of the house. My favorite part about this story is the almost sepia-toned artwork with beautiful, intricate borders. 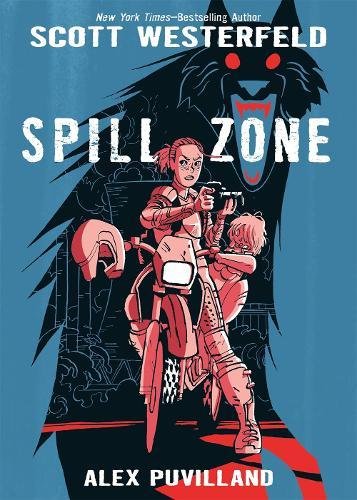 Spill Zone by Scott Westerfeld, illustrated by Alex Puvilland (YA 13+)
Great artistry and suspense! The Spill was an event we can only guess about but seems radioactive with monsters and floating bodies. Now, afterwards, two sisters live alone. The oldest, Addison, makes money by photographing inside the spill zone, a glowing area of the city where her parents and many others died. Addison decides to put herself in more danger (getting off her motorcycle) when a rich benefactor makes Addison a lucrative but dangerous offer for different photographs. The plot thickens when a mysterious man with Spill-based powers arrives in the country — and then the story abruptly ends on a cliffhanger. I really wish we had just a bit more of the story to get a better sense of what’s going on before the book ends. For now, I’m just anxiously waiting for next book.