Graphic Novels Teachers Should Take Seriously (& Use in the Classroom)

A reader asked me to recommend graphic novels teachers should take seriously and use in the classroom. Graphic novels aren’t fluff, they’re quite valuable for a variety of reasons. They can be content-rich like the titles below, they appeal to children visually, they help kids infer and draw conclusions, and kids love reading them. Read all my reasons for reading comics and graphic novels as well how comics can actually build reading skills.

I’m sharing favorite graphic novels that elementary and middle school teachers and homeschoolers can use to teach specific content or skills. See what you think. Would you use these books in your classroom?

Graphic Novels Teachers Should Take Seriously (& Use in the Classroom) 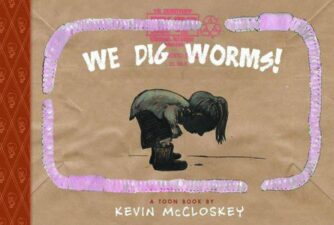 We Dig Worms! by Kevin McCloskey (ages 6 – 8)
SCIENCE: WORMS
I love, love, love this early reader book! It’s a Toon Book Early Reader so you know from the get-go that it’s going to be cartoon images, but you won’t know how the author makes worms seem so fascinating. He does this with eye-popping illustrations and one sentence of text per page that explain something about the worm — sometimes he has kids asking questions which the worm answers. He painted on recycled grocery bags which makes for a gorgeous, earthy feeling throughout. I just can’t say enough good things about this short little book. 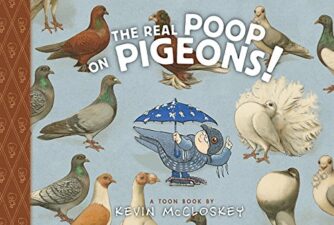 The Real Poop on Pigeons! by Kevin McCloskey (ages 6 – 8)
SCIENCE: PIGEONS
When this engaging early reader book shows a man saying how he doesn’t like pigeons, kids dressed up like pigeons tell him how much more there is to know — besides that they poop all over. We learn how fasts pigeons can fly (faster than a car!), how they carried the first airmail, that they are in the same family as doves, and the many wild varieties of pigeons made by breeders,  . . . The fun facts are actually fun — Picasso named his daughter after pigeons and the Dodo bird is a pigeon. Who knew!? Readers will be as convinced as the man in this story that pigeons are pretty wonderful but the end. Not like squirrels. Now those are pests. 🙂 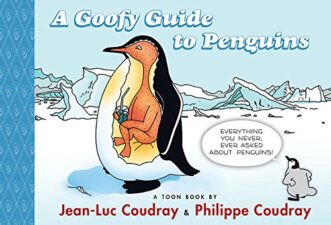 A Goofy Guide to Penguins by Jean-Luc Coudray & Philippe Coudray (ages 6 – 8)
SCIENCE: PENGUINS
A mix of groan-worthy penguin jokes and cool penguin facts, this is a delightful nonfiction graphic novel for beginning readers. The illustrations often answer the questions posed by the narrator penguin and are almost always silly. 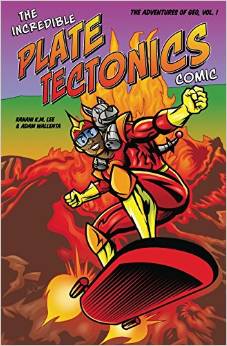 The Incredible Plate Tectonics Comic by Kanani K.M. Lee & Adam Wallenta (ages 9 – 12)
EARTH SCIENCE
I highly recommend this well-written and educational comic book. George, a normal skate boarder kid, is also Geo, a superhero who can transport back in time to learn about geology. In this story, he’s back to Pangea where he learns about plate tectonics first hand! The story goes back and forth between George and Geo seamlessly. Fantastic! 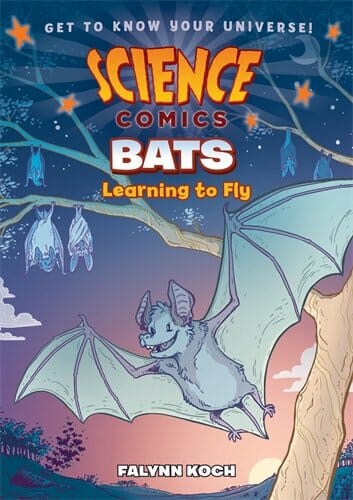 Science Comics: Bats Learning to Fly by Falynn Koch (age 8 – 12)
SCIENCE: BATS
Factual information is embedded within this story about a lost little bat who observes a tour group in the desert learning about bats from a tour guide. When the little bat gets hurt, he’s taken to a wild animal hospital where he meets other kinds of bats. At the hospital, the bats lively conversations help the little brown bat learn more about bats — what they eat, how they fly, different species, echolocation, and where they live. SO well done! 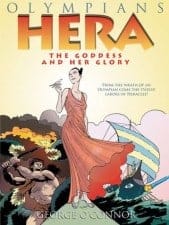 Hera: The Goddess and her Glory by George O’Conner (age 9 – 12)
GREEK MYTHOLOGY
Both my kids love O’Conner’s graphic novels because they immerse kids in the traditional Greek myths. O’Connor brings them alive with his illustrations and adventurous plotting. If you’re want to read Greek mythology, this is a fun way to do it. Check out his other books including Athena and Zeus: King of the Gods but be aware that these stick to the actual myths –and the Greek gods weren’t models of purity and morality. 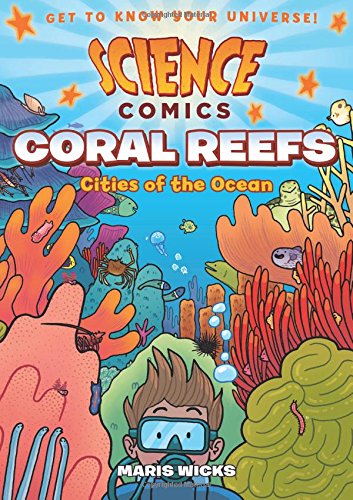 Science Comics Coral Reefs Cities of the Ocean by Maris Wicks (ages 8 – 12)
SCIENCE: OCEAN
An adorable yellow fish narrates this informative book about his habitat, coral reefs. It’s all facts though so it’s not the kind of book that most kids (or adults) will want to sit down and read in one sitting. Read it in chunks and you’ll soon be an expert on coral reefs. 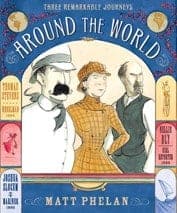 Around the World by Matt Phelan (ages 8 – 12)
BIOGRAPHIES
Around the World is a graphic nonfiction novel so it reads easily while you’re learning information  — is three biographies. Each of the three historical individuals traveled around the world post-Verne. Thomas Stevens bicycled around the world with an early prototype of the bicycle, the kind with one large wheel and one small. (Lots of falling.) Famous for being a daring female reporter, Nellie Bly tried traveled to beat Jules Verne’s record. In the third biography, Joshua Slocum sailed around the world in his old sail boat. A graphic novel is a fantastic way to read about history – this book really captured me. 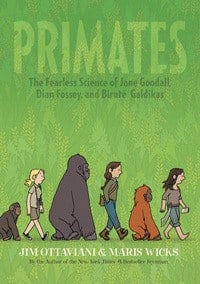 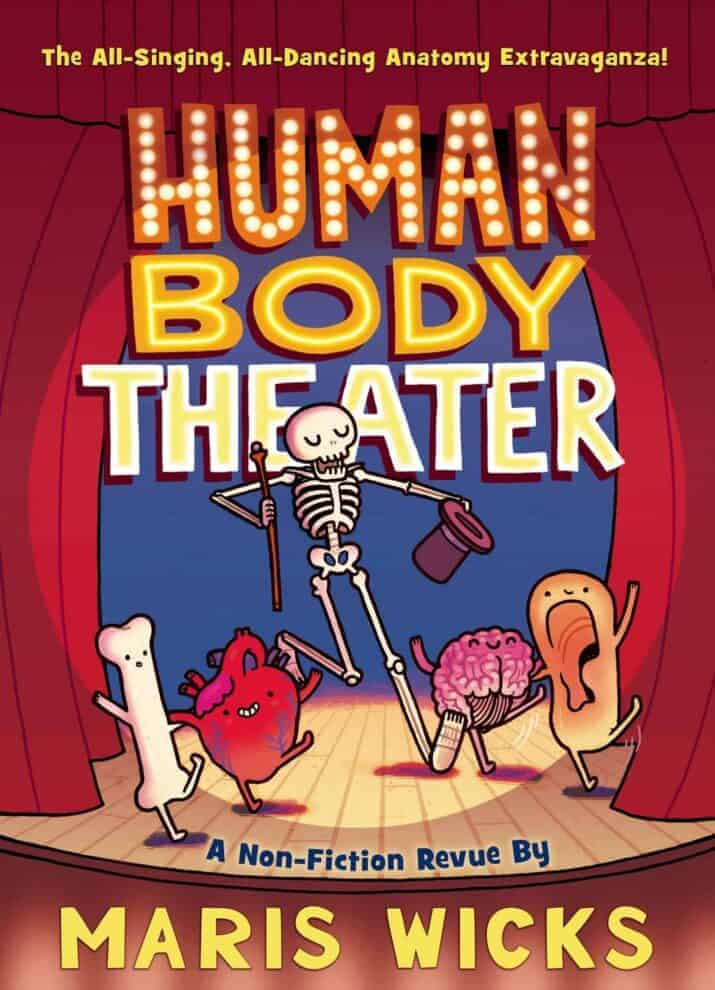 Human Body Theater: A Nonfiction Revue by Maris Wicks (ages 10 – 14)
SCIENCE: BODY
This nonfiction graphic novel ROCKS! It should be required reading for students studying the human body because the information presented this way is so memorable and understandable. I love Skeleton’s narration and the awesomely cute illustrations of every body system from the smallest cell parts to the biggest organs. 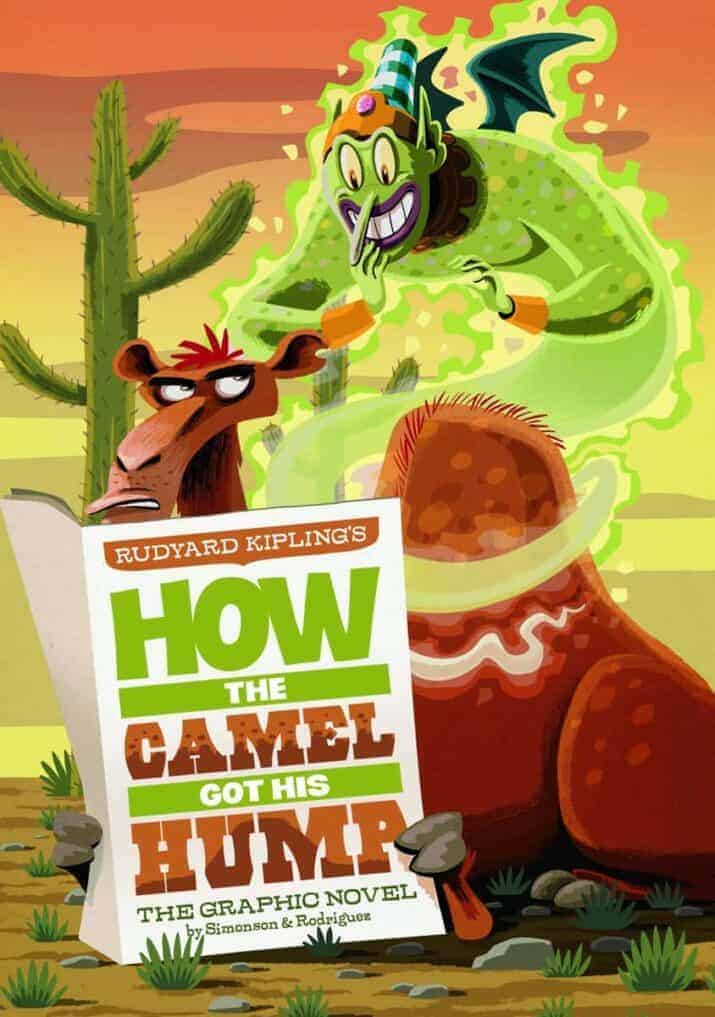 Rudyard Kipling’s How the Camel Got His Hump adapted by Louise Simonsson, by Rudyard Kipling, illustrated by Pedro Rodriguez (ages 8 – 11)
FABLES
I had no idea the REAL story behind the camel’s hump. How about you? Read this fantastic story to learn the truth. It’s about a lazy camel who always said “HUMPH,” and a magical genie (djinn) who teaches the camel a lesson. 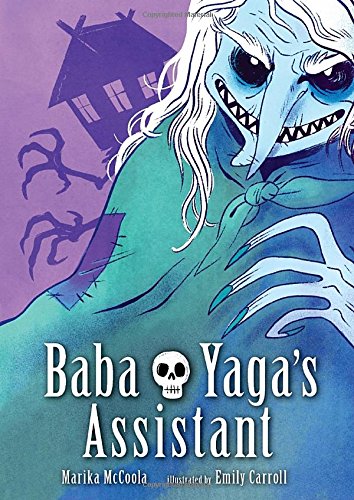 Baba Yaga’s Assistant by Marika McCoola, illustrated by Emily Carroll (ages 10+)
RUSSIAN MYTHOLOGOY
Courageous and adventurous Masha knows Baba Yaga from her grandmother’s stories. After her grandmother dies, and her father remarries, Masha decides to become Baba Yaga’s assistant. To pass Baba Yaga’s tests, Masha uses her wits and the stories from her grandmother. She thinks she will fail when she rescues three children from Baba Yaga’s cage but she passes. Excellent storytelling and illustrations kept me totally enthralled in this not-your-average-fairy tale story. I’d recommend this book for an elementary or middle school unit on mythology. 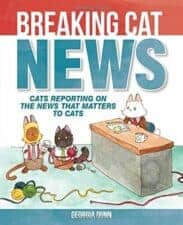 Breaking Cat News: Cats Reporting on the News that Matters to Cats by Georgia Dunn (ages 9+)
WRITING WITH VOICE, POINT OF VIEW
These are hilarious, tongue-in-cheek cartoons of cats reporting the very latest news from their oh, so news-worthy lives. As you can imagine, they report breaking news about empty food bowls, the best sun spots, and the vacuum cleaner’s return as well as life’s many mysteries such as why is there glass in the way of the birds. Good stuff, right?! Very funny. Teachers and homeschoolers, use this to model writing with voice. 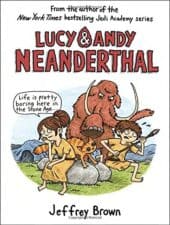 Lucy & Andy Neanderthal by Jeffrey Brown (ages 8 – 12)
HISTORY
Little funny stories about the life of a Neanderthal family are intermixed with factual information about the actual history — hunting practices, size of large cats, that sort of thing — in this graphic novel from the author of the Jedi Academy series. 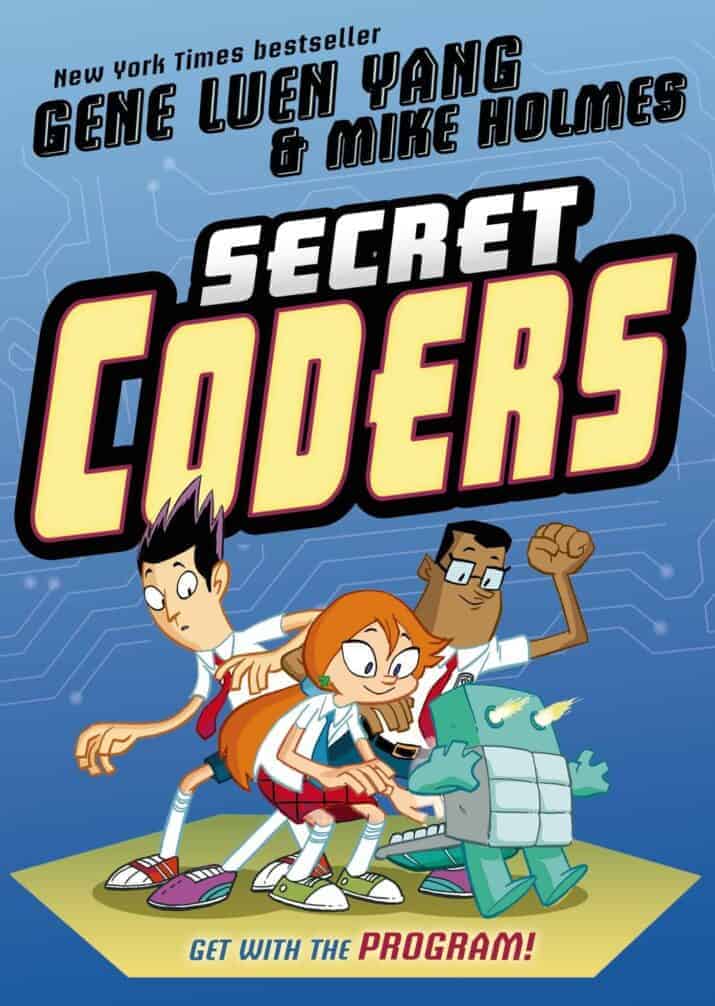 Secret Coders: Get with the Program by Gene Luen Yang and Mike Holmes (ages 8 – 12)
STEM: CODING
What’s happening at Hopper’s new school? She and her friends discover something very amazing about the birds — they’re robotic and can be controlled by numbers. Which leads the kids to go up against the scheming, evil janitor.  Readers learn some basics of how to use the programming language Logo with sequence, iteration, and selection, and must apply their knowledge to help the characters. I love the interactivity, the diverse main characters, and the progressive way the authors teach the logical thinking of programming. Use in the classroom to teach programming basics. 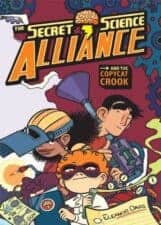 The Secret Science Alliance and the Copycat Crook

by Eleanor Davis (ages 8 – 12)
STEM
A group unlikely science-geek friends solve a mystery; this is a fantastic (STEM-themed) story that is decidedly pro-science. 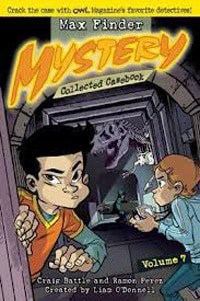 by Craig Battle and Ramon Perez, created by Liam O’Donnell (ages 8 – 12)
MYSTERY, DEDUCTIVE REASONING
If you’re teaching the mystery genre in elementary, you’re in for some fun with this graphic novel. Each of the cases, told in comic form, develop the story and give you clues. Readers use the clues to figure out the answers. When you turn the page, the clues and answer are explained. How great for critical thinking, right!? 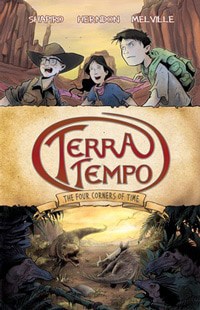 by David Shapiro, illustrated by Christopher Herndon, color by Erica Melville (ages 8 – 12)
GEOGRAPHY, HISTORY
Three friends use a time map to travel waaaay back to the four corners area of Colorado, Utah, New Mexico and Arizona to the Cretaceous age of dinosaurs but their troubles are more complex than just the gigantic beasts. Unfortunately, they are not the only humans trying to survive. LOVE  it!

Snow White: A Graphic Novel by Matt Phelan (ages 10+)
FAIRY TALE, HISTORY
I adore this reimagined graphic novel about Snow White set in New York City in the 1920s. Snow White’s dad is a Wall Street king, her stepmother is a Zigfield Follies star, and her seven small protectors are street kids. It’s interesting how Phelan uses this historical setting to retell a familiar fairy tale. The black and white illustrations set the tone for this dark story with a happy ending. 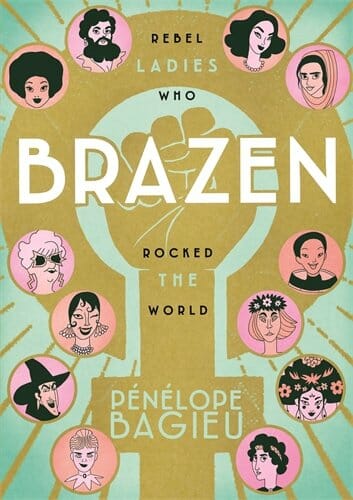 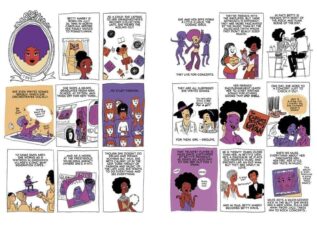 Brazen: Rebel Ladies Who Rocked the World by Pénélope Bagieu (ages 10+)
BIOGRAPHIES
There’s been a plethora of children’s books about inspirational women in the last few years. But what makes Brazen stand out among the crowd is that it’s written in comics and in stories rather than expository text with one illustration. Kids love stories. Kids love graphic novels. Put those together and you’ve got one must-read book! Oh, and I’m fascinated by the colors used to illustrate these comics — they’re unusual and very visually appealing. Some of these stories will be familiar (Temple Grandin) but most of them will be new to you (Clementine Delait, Nzinga, or Sonita Alizadeh.)

The Best Graphic Novels for Kids 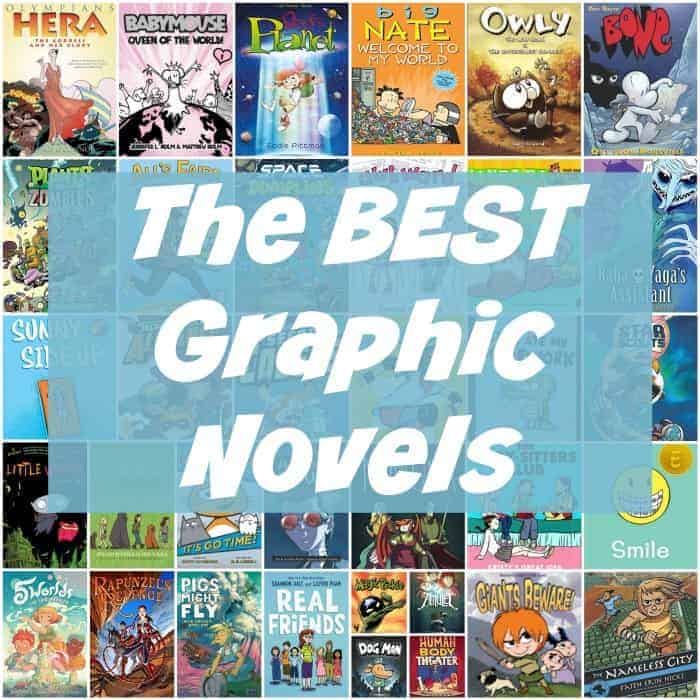 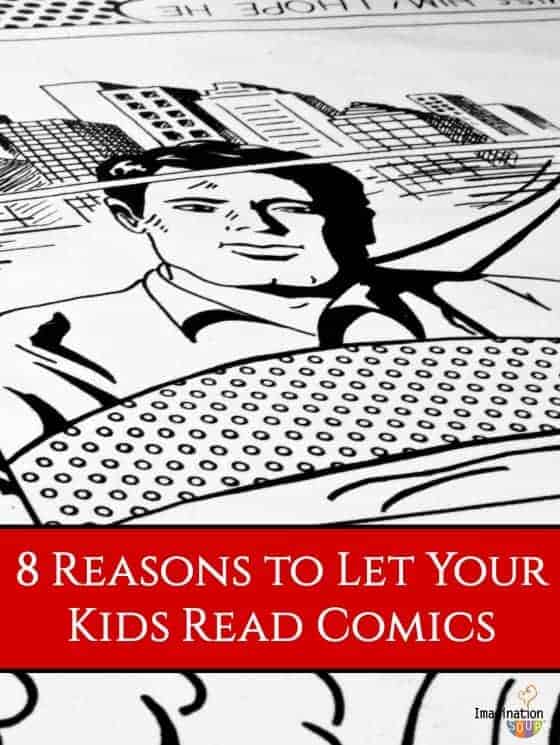 The Best Basketball Books for Kids of All Ages

Strengths Based Parenting From Gallup