You already know that picture books are imporant for all ages of children, right? And that even if your child can read chapter books, picture books offer so much in terms of engaging stories, reading something in one sitting, learning vocabulary, appreciating art, improving listening skills, as well as encouraing thinking and discussion.

So grab a good picture book and enjoy it with your kids. The 2014 picture books I’ve reviewed here are totally hilarious and good for all ages. 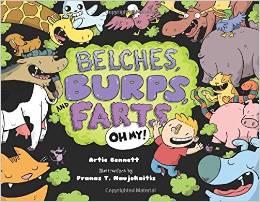 Belches, Burps, Farts, Oh My! by Artie Bennett
Do you know that fish fart to communicate? Or that you can’t burp lying on your back? Artie Bennett hits it out of the park again with a fascinating look at the grossest information kids love to know. (And do!) Plus, this is a rhyming books that works! (My pet peeve when it doesn’t.) It actually rhymes and makes sense. So, I give two enthusiastic belches for this terrific new book from the author of The Butt Book. My kids love this book (and so do I.) I wonder what belching facts your kids will love the most? 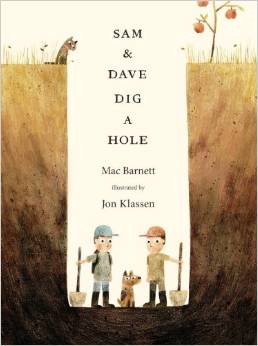 Sam and Dave Dig a Hole by Mac Barnett, illustrated by Jon Klassen
If you’ve been reading my blog for awhile, you know that I’m a huge fan of Mac Barnett. Guess Again! and Battle Bunny are two of my all time favorite funny picture books. (My kids, too.) The hilarity of Sam and Dave Dig a Hole is in the genius pairing of Barnett and Klassen because the humor isn’t in the story but in the illustrations. Kids get this right away – they go straight for the pictures and think it’s totally funny. So Sam and Dave dig their hole and dig and dig. But they find nothing. But their dog, he’s sniffed out the world’s biggest diamond. But Sam and Dave are not as smart as their dog are they. No. You gotta just shake your head. Dogs know what’s up. Kids? Not so much. 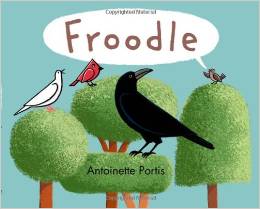 Froodle by Antoinette Portis
Got to love Little Brown Bird. She’s sick of saying “peep” all year long. So she tries something new: “Froodle sproodle!” Well, she insists quite an uproar with the other neighborhood birds. When the silliness spreads, soon all the birds are trying out new sounds. “Oobly snoobly” and  “Dooblik” and ‘Wuppy” are just some of the new sounds the birds sing. Wait — what in the world are the cat and dog saying now? Delightful. 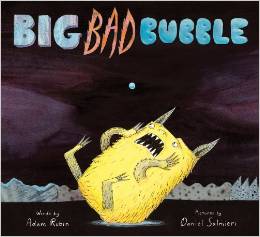 Big Bad Bubble by Adam Rubin, illustrated by Daniel Salmieri
This hilarious picture book will keep your kids laughing. We learn that bubbles, when popped, reappear in La La Land where monsters live. And monsters are terrified of bubbles. Totally freaked out. 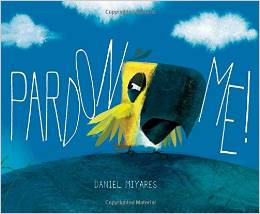 Pardon Me! by Daniel Miyares
A mostly wordless beautifully illustrated funny picture book that shows animals squeezing together (Pardon Me) onto a dry surface in the middle of the pond. Only perhaps that dry surface isn’t what you think it is. This book made me smile even though it wasn’t a happen ending per say. 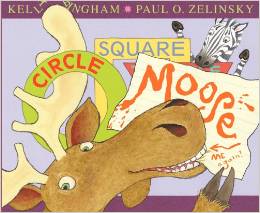 Circle, Square, Moose by Kelly Bingham, illustrated by Paul O. Zelinsky
Moose is up to his usual antics and this time it’s in a shape book. Zebra, the narrator, can’t get Moose to get out of the book!! But they will always be good friends no matter what. HILARIOUS. (Added to my BIG LIST OF FUNNY PICTURE BOOKS FOR KIDS.) 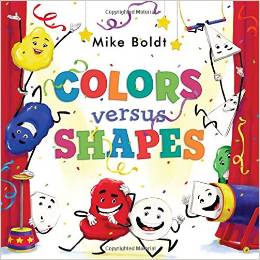 Colors versus Shapes by Mike Boldt
The colors show the shapes how talented they are by mixing yellow and blue to make green. The shapes show the colors how two triangles make a square. They argue until . . . an octagon and the color red collide. Whoa! Maybe they’re better together. Silly fun about the power of cooperation! 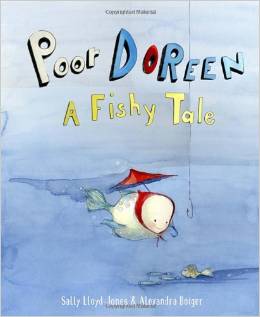 Poor Doreen A Fishy Tale by Sally Lloyd-Jones & Alexandra Boiger
You’ll groan in agony watching clueless Doreen mistake danger for fun and adventure. First, it’s the hook that’s not really a delicious dragonfly, then it’s the yanking fishing pole that makes her think she can fly. Her so-called adventures continue all the way to her second cousin twice removed’s home. What an incredibly funny fishy tale! 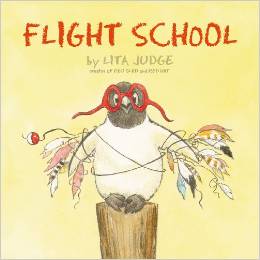 Flight School by Lita Judge
Little Penguin has the soul of an eagle. Only his body isn’t built for flying. Little Penguin’s friends at Flight School try to help him fly. Then flamingo has an idea that works — and penguin experiences flying. He’s so thrilled he brings a friend to flight school. A bird that has a soul of a swallow. Ostrich. 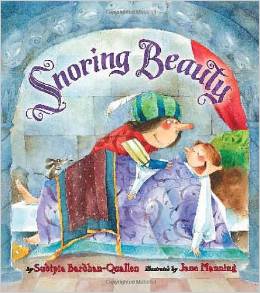 Snoring Beauty by Sudipta Bardhan-Quallen, illustrated by Jane Manning
It’s the day before Mouse’s wedding and he’s desperate to do something about Sleeping Beauty’s loud loud snoring. But when Prince Max comes to wake Sleeping Beauty, he is dismayed with the awful snoring. Well, Mouse knows it’s up to him to kiss the snoring Beauty. And it works! Everyone lives happily ever after. 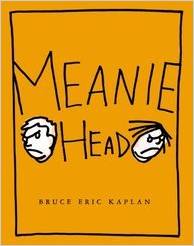 Meanie Head by Bruce Eric Kaplan
This is a quirky, wild story about a pair of siblings w whose fights end up causing so much destruction that they blow up the world. And they are so sad, they vow to never blow up the world again. (Told you it was quirky.) 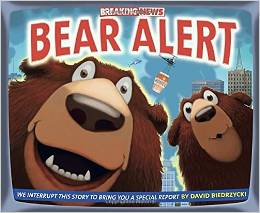 Bear Alert by David Biedrzycki
A news bulletin ticker runs at the bottom of the cartoon-like illustrations. Bears are in town. They cause the townspeople to panic. Until the bears unwittingly stop three burglars and save the day. Silly fun.

How to Successfully Use Mentor Texts to Teach Writing