Flash Cards or Finger Paints: Should Academics or Play Be the Goal of Preschool?

by Amy Webb, parent, educator, and blogger at The Thoughtful Parent.

If you are the parent of a preschool-aged child, you have probably put quite a bit of thought into what type (if any) of preschool to enroll your child. If you’re like me, you had no idea how complicated a decision this could be until you started delving into the topic.

Play Based vs. Academic Preschool

One of the first things I discovered when learning about preschools is that there seems to be an emerging distinction between “play-based” and “academic” programs. On the face of it, many parents might have a tendency to gravitate towards the “academic” preschool model. Isn’t this the best way to prepare my child for the school environment he will face in the future? Isn’t a high-stakes academic environment what he/she will experience once they enter formal schooling? And herein lies the crux of this issue (in my mind). We, as parents, may feel that academic rigor is the definition of “quality” in K-12 education and so it must be the same for preschools. If we look at the research in early childhood education, however, we find this is not necessarily the case.

A quick review of the academic research on this topic reveals that this recent emphasis on “academically rigorous” preschools may, in fact, be undermining youngsters’ ability to learn and be creative. Several recent studies have compared young children’s learning when provided either (1) direct instruction about a toy from a teacher, or (2) time to explore a toy on their own with little adult instruction. The results were quite clear: preschoolers who were “taught” how to use a toy by a teacher, did use the toy as instructed; but that’s all they did. They did not try to find any other features of the toy that the teacher did not explain to them and they did not try to use the toy in new ways. By contrast, the preschoolers who were given no direct instruction on the toy, they found new features of the toy and new ways of playing with the toy that the direct instruction group never noticed. So it seems that preschoolers do learn from direct instruction, but they are not as creative or flexible in their learning as when they are just left alone to learn by playing.

This research points to a key aspect of child development that may not be readily apparent: young children do not learn the same way adults learn. As adults, when we learn a new task, most often we are given direct instruction from someone else or perhaps we read instructions from a manual. Young children, on the other hand, do not learn most effectively this way. Their form of learning is what psychologist Alison Gopnik calls “guided discovery.” This involves the child exploring an object or task in their own way while watching an adult or older child perform the task. The key difference, it seems, is that the child is not directly instructed on how to use an object or perform a task; they simply figure it out through their own exploration (i.e., play).

Of course, as children get older there is a need for direct instruction. Skills like reading and writing would be difficult, if not impossible to learn through a “guided discovery” type of learning. However, trying to provide rigorous academic direct instruction at the preschool age is essentially putting the cart before the horse. Preschoolers are still in the discovery stage; they are not yet ready for routinized learning.

In fact, this type of academic drilling may undermine their interest in learning all together.  The tricky part of this equation, however, is that kids in “academic” preschools may in fact learn their ABC’s sooner and be able to recite memorized information back to adults on cue. This is appealing to us adults. I admit, the thought of seeing my toddler name numbers, letters, and even phonic sounds seems exciting. What research is beginning to show us, however, is that this immediate “payoff” in the form of routinized learning may come at the expense of a real interest and love of learning. A study by researchers at the University of North Florida showed just this. They followed 160 children who experienced three different types of preschool settings: child-initiated (e.g., play-based), academically directed, or a combination of the two. These children were followed and their academic performance tracked until fourth grade. The results showed very few differences in the children’s school performance in early elementary school. By the time the children reached fourth grade, however, the children who attended the academic-focused preschool showed a gradual decline in academic performance (i.e., grades). Of course, this is only one study, but research of this type implies that children pushed into academics too soon may miss out on a more integrative, curiosity-driven approach to learning that they will need later in life.

In many ways this research reiterates what we’ve know about preschool for awhile. The real benefit of preschool is in learning life skills like social skills, self-control, and persistence, not necessarily in any “academic” skills. Research from 30+ years of Headstart and similar programs have provided strong evidence for this. Kids who attended those preschool programs (most of whom are economically disadvantaged) did better than their peers in school and in life, but not because these programs helped increase their IQ. Researchers found it was the social skills they learned in preschool that put them ahead of their peers on many aspects of later achievement. One of the primary goals of preschool is to help students develop self-regulation and play-based preschool promotes this goal in a better, more child-friendly way. Research has continued to show that self-regulation is a better predictor of a child’s later academic success (and life success) than IQ tests or academic tests.

Sure, preschool may also help kids learn their ABCs and colors, but the interaction with peers and teachers is what really seems to matter. Well-known British pediatrician D.W. Winnicott put it this way, “It is in playing, and only in playing, that the individual child or adult is able to be creative and to use the whole personality, and it is only in being creative that the individual discovers the self.”

Bio: Amy Webb is stay-at-home mom to a 2 year old son and author of the blog The Thoughtful Parent. While completing her PhD in Human Development and Family Sciences she realized how little of the academic research about child development and parenting actually reaches the average parent. With The Thoughtful Parent she “translates” the latest child development research from academic lingo to a parent-friendly format. Amy also contributes monthly to the parenting blog Notes on Parenting. 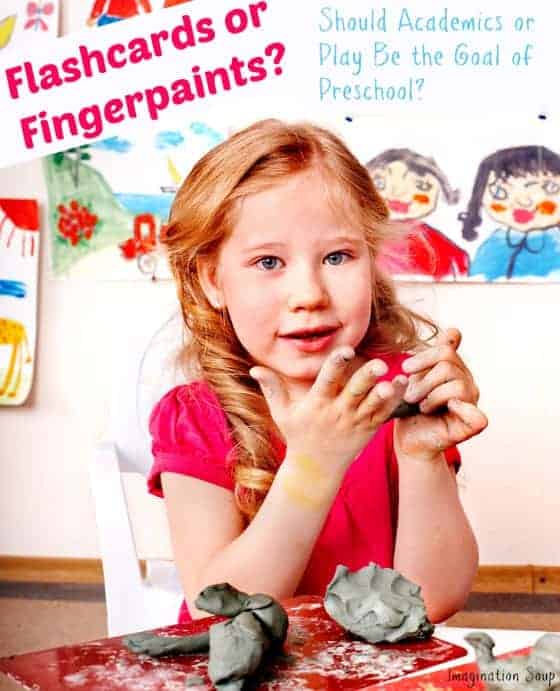