Grab one of these new graphic novels and give them to your students and kids to read. You’ll find a LOT of great choices here that are insightful, funny, and magical. 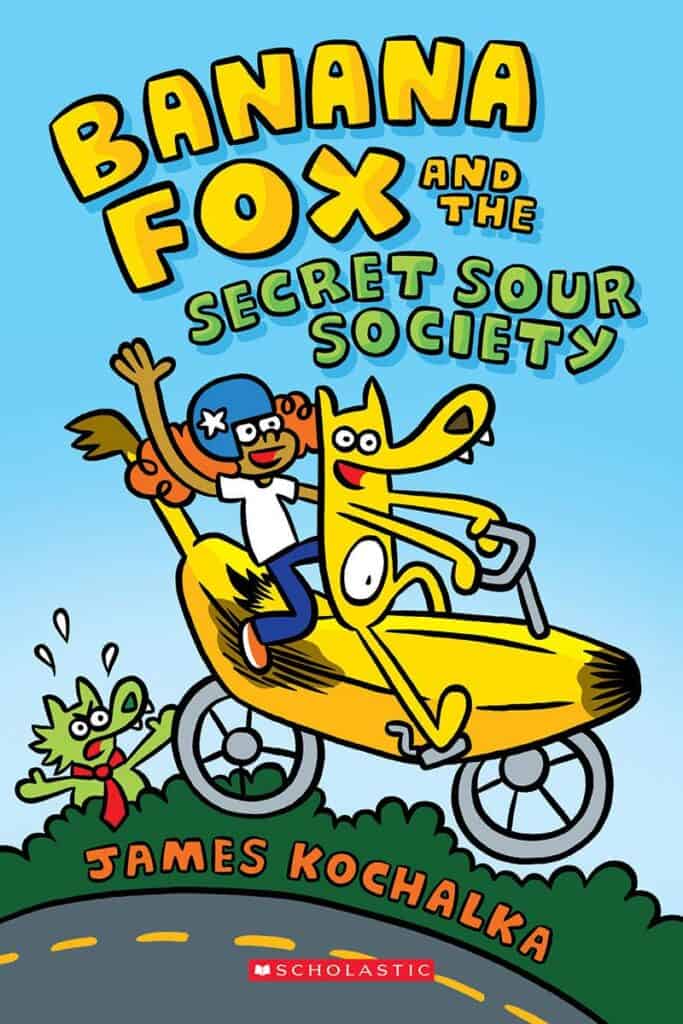 Banana Fox and the Secret Sour Society by James Kochalka (ages 7 – 10)
HUMOR
If you’re about 7-years-old and like very weird and wild stories that ONLY make sense to kids, I must introduce you to Banana Fox. The book is filled with totally ridiculous humor (not potty humor) that hits the right spots for so many kids. Banana Fox is quite a character whose goofy antics to stop the Secret Sour Society will keep you laughing the entire way through this book. 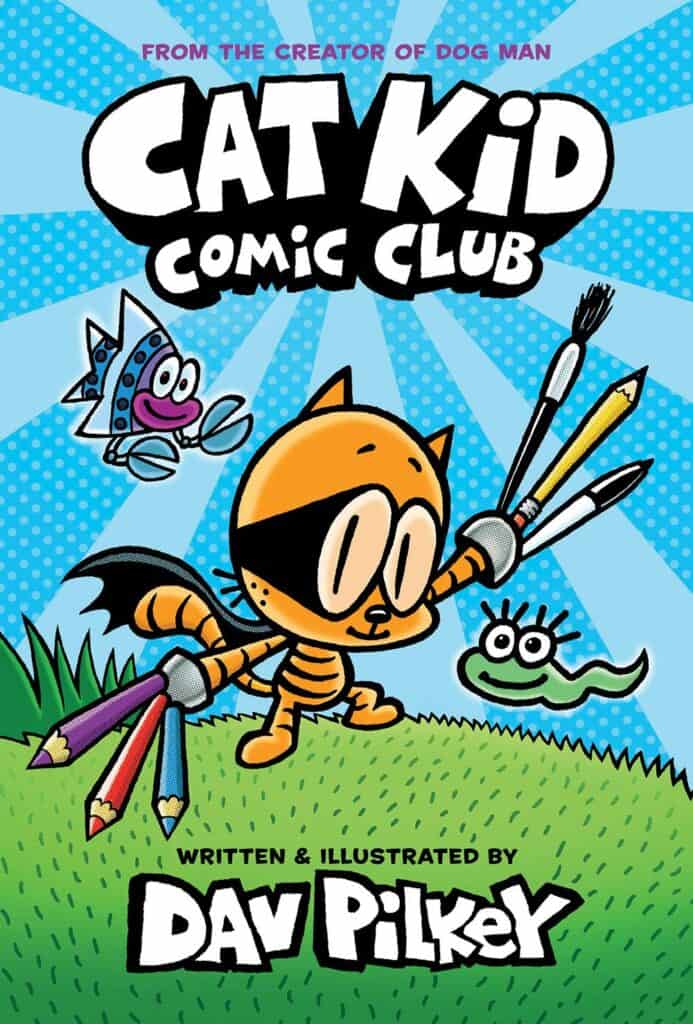 Cat Kid Comic Club by Dav Pilkey (ages 7 – 10)
HUMOR / GROWTH MINDSET
My writing teacher heart adores this book about encouraging kids to write their own comics! Plus, it’s totally hilarious. Cat Kid teaches a class for the tadpoles about making your own comic books…which doesn’t go well until the tadpoles get excited about failure and get started writing and drawing. If you like a lot of silliness (including potty humor) with great messages about writing, creativity, and persistence, read this book next. 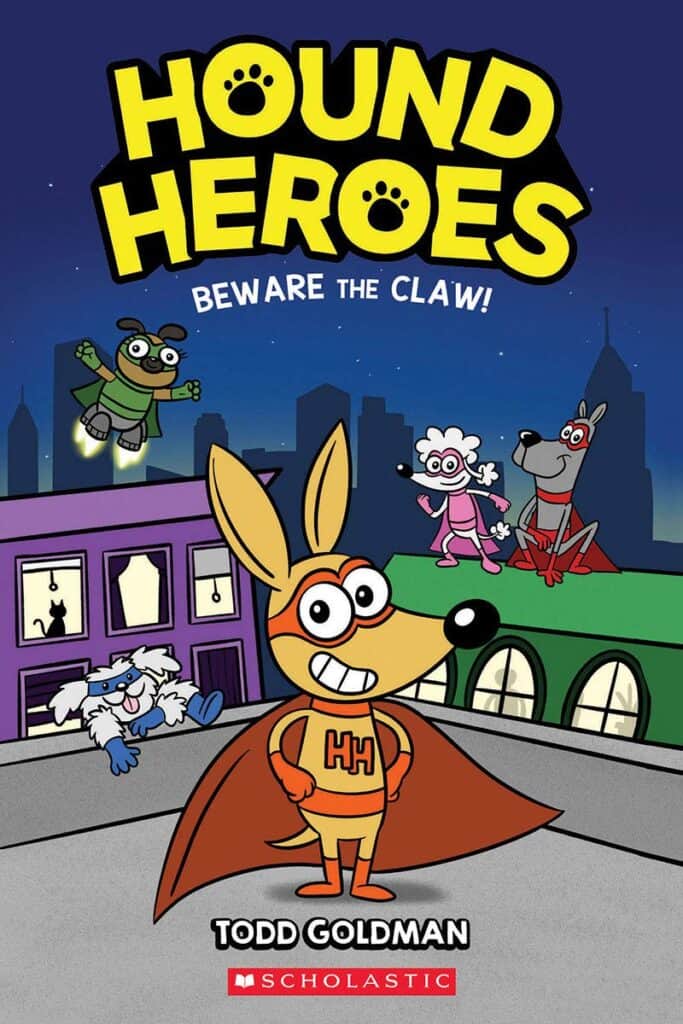 Hound Heroes: Beware the Claw by Todd H. Doodler, illustrated by Todd Goldman (ages 7 – 10)
HUMOR
Get ready for a new SILLY graphic novel for your beginning readers. When a spaceship crash lands, it gives a group of dog friends superpowers and superhero outfits. Each dog in the group has a unique personality but none of the dogs take their powers seriously at first because they’re too busy wreaking havoc and goofing around. Until…the evil kitties TAKE OVER THE CITY!! Can the Hound Heroes save the day? (Of course, they can!) 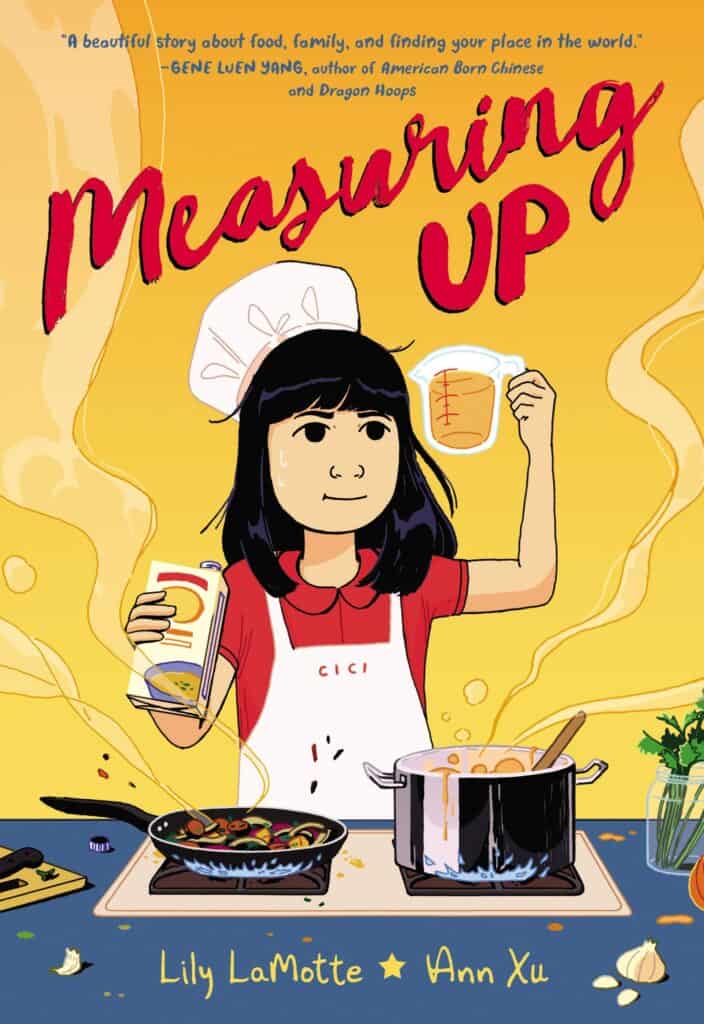 Measuring Up by Lily LaMotte, illustrated by Ann Xu (ages 8 – 12)
REALISTIC / #OWNVOICES
A beautiful story of food, a close-knit, multigenerational family, finding your place in a new culture and country, and staying proud of your heritage…Cici moves to the U.S. from Tawain and wants her A’má to come, too. She hopes to win the grand prize in a cooking contest and use the money to buy her A’má a plane ticket. Cici wants to cook American food like her cooking contest partner…She learns from Julia Child but in the end, Cici returns to her Tawainese roots to win the contest. 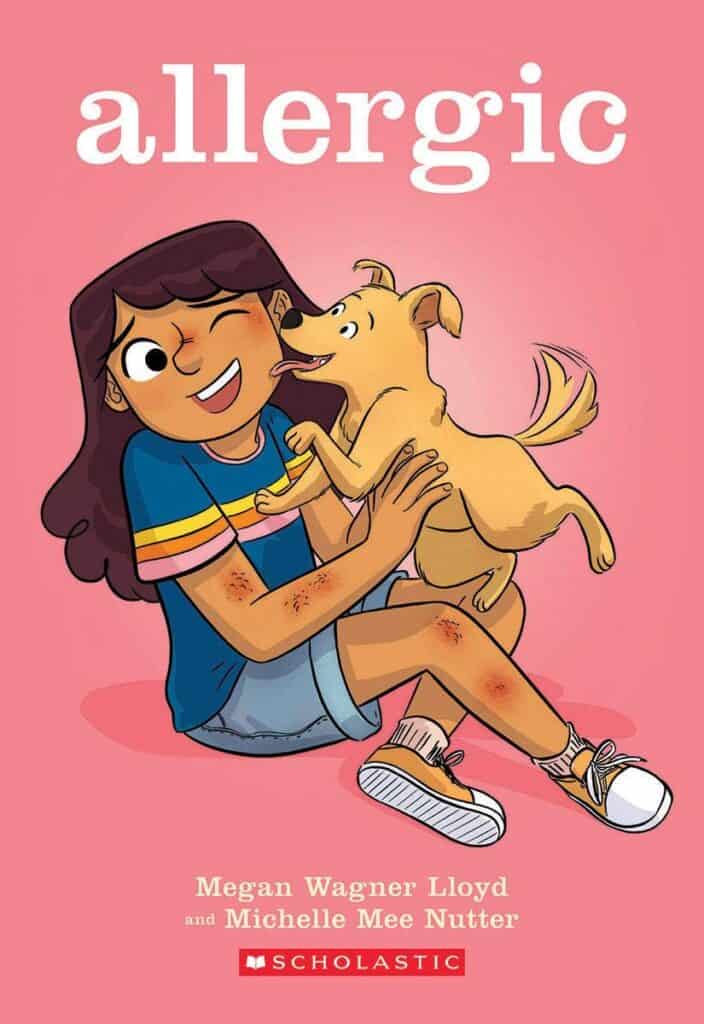 Allergic by Megan Wagner Lloyd and Michelle Mee Nutter (ages 8 – 12)
REALISTIC
A well-done middle-grade graphic novel about a child with allergies! Maggie is devastated that she’s allergic to dogs. What’s more, her new fifth-grade class must get rid of their class pet because of Maggie’s allergies –which makes everyone mad at Maggie. But, she befriends a new girl next door who becomes a treasured friend in her life…until that friend gets a puppy. Maggie interprets this to mean that her new friend doesn’t like her anymore. Eventually, the two friends work out a solution that won’t be a problem for Maggie’s allergies. Throughout the story, the author shows the process of allergy testing and going in for regular allergy shots which will be relatable to many kids, just like mine. The story ends with Maggie helping with her new baby sister and finding joy and satisfaction in that. 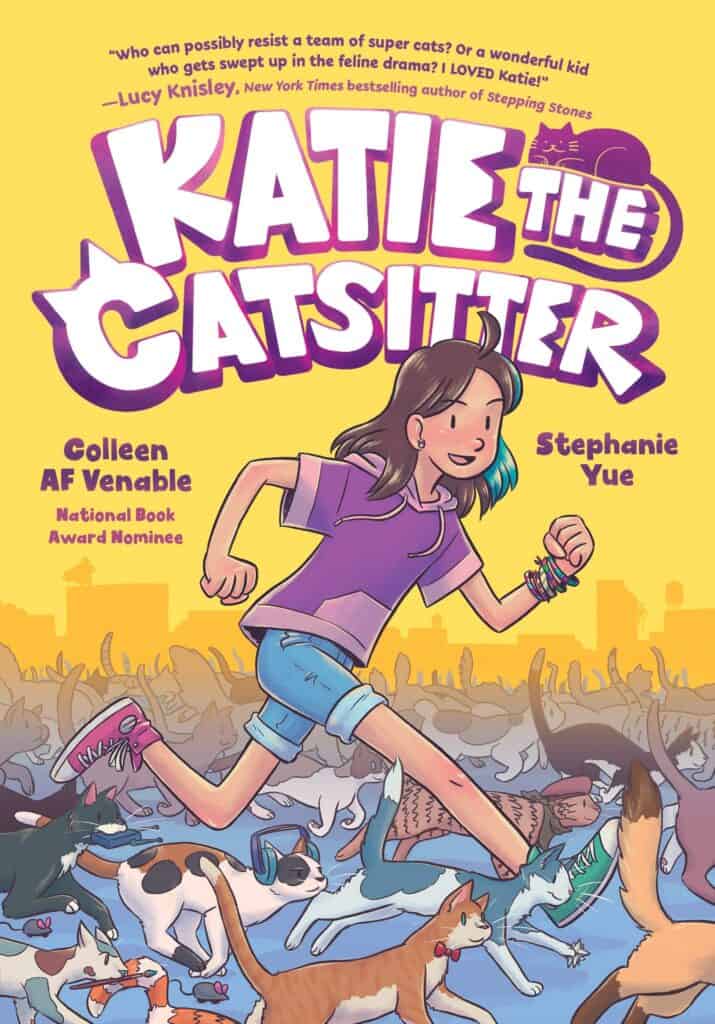 Katie the Catsitter by Colleen AF Venable, illustrated by Stephanie Yue (ages 8 – 12)
SUPERHERO
If you like mystery, adventure, and CATS, you won’t want to miss this entertaining graphic novel! Katie desperately wants to join her friends at their summer camp so to earn money, she gets a job for her neighbor Madeline catsitting 217 cats. But, something is VERY weird because these are super-smart cats with destructive behaviors and powerful abilities, not to mention that Katie finds evidence that her neighbor might be the supervillain, Moustress. Then, when the Moustress gets captured, Katie decides she and the cats must take action and save their friend. 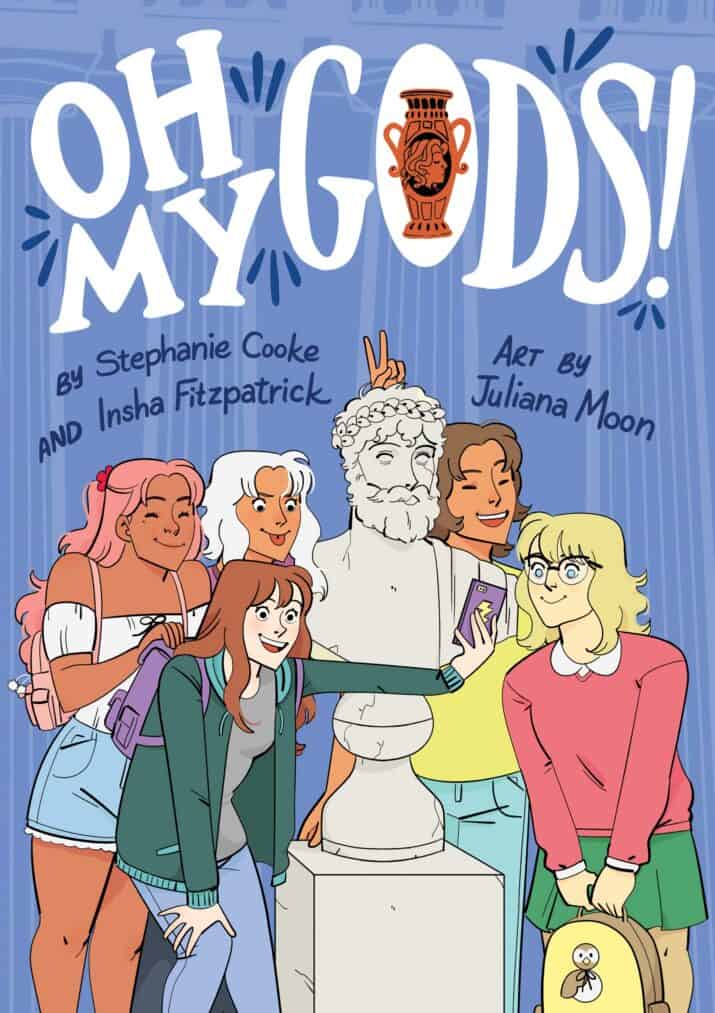 Oh My Gods! by Stephanie Cooke and Insha Fitzpatrick, illustrated by Juliana Moon (ages 8 – 12)
GREEK MYTHS
I’m not a fan of the title but the story is enjoyable and engaging, not snarky or cliquey like the title implies. Karen moves in with her dad, Zed, on Mount Olympus. The kids at her new school are very different — she wonders if they’re into LARP but they’re not, she learns that they’re actually gods and goddesses! When her friend Apollo gets turned to stone, Karen and her new friends have to clear Karen’s name and save Apollo. They meet a lonely girl named Medusa who is responsible for the stone statues. Will they be able to fix things for both Apollo and Medusa? 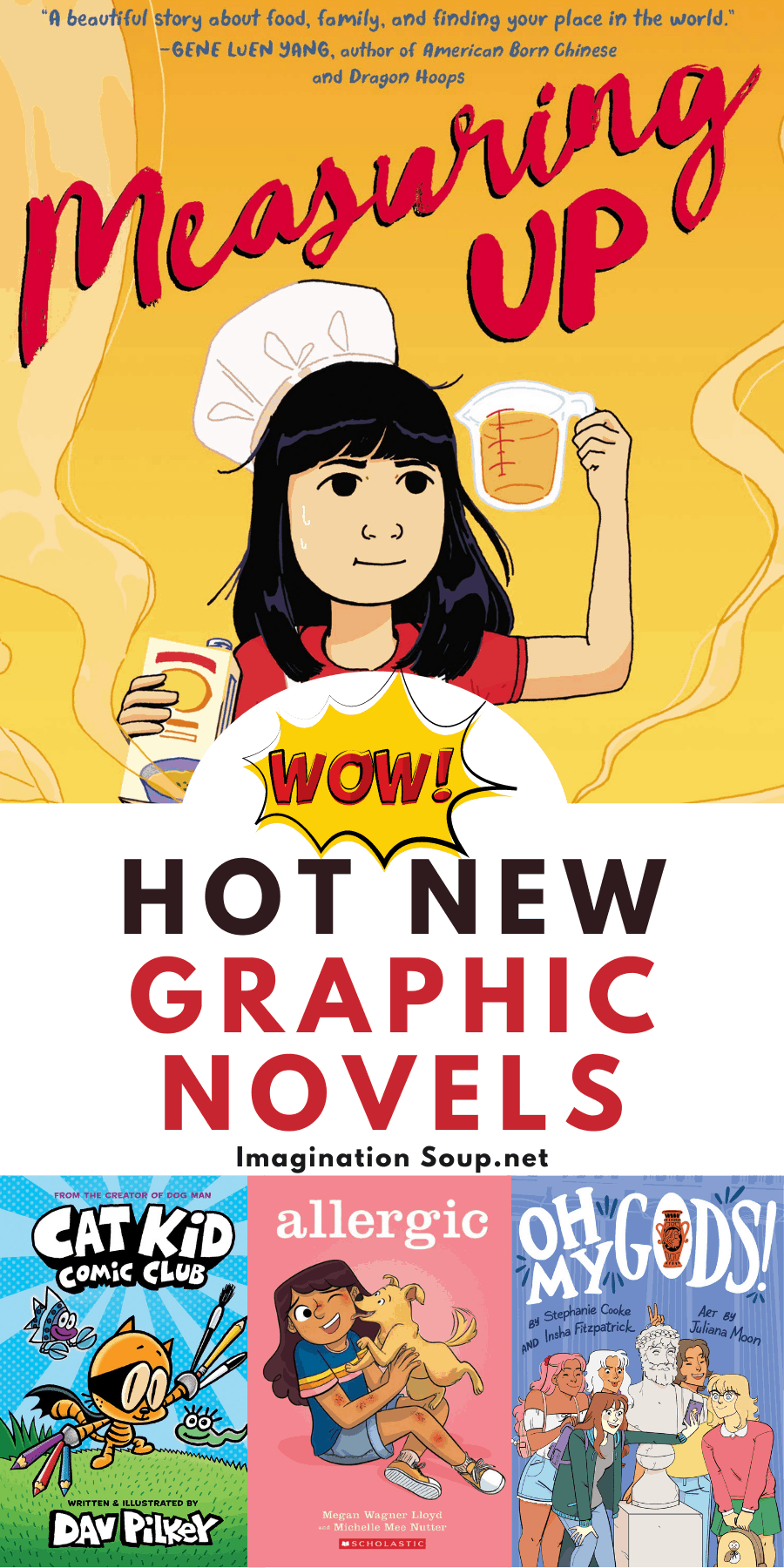 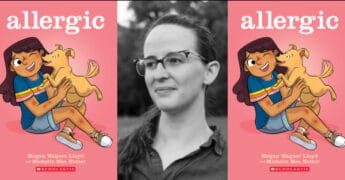 What My Allergies Taught Me About Resiliency

14 Bookmarks That Kids Can Make Themselves (for Gifts or Fun)