Guess what we’re doing this summer? Nothing much. We went to the pool for the first time last week but other than a few trips to the library, we’re doing nothing.

The book, Creating Innovators, confirmed that my kids need time. They need time for play and discovery.

Back to the book, . . . I also learned this valuable parenting knowledge to share with you from the book, Creating Innovators . . .

What stands out to you?

Do you have time for boredom? . . . for play and discovery? 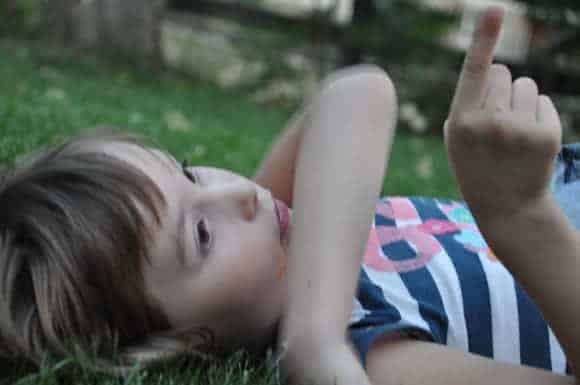 from Creating Innovators: The Making of Young People Who Will Change the World by Tony Wagner:

Video of Neal on Parenting Her Young Innovator from Creating Innovators on Vimeo.

For her son Tucker, who is now six, she has only two rules, Annmarie explained, safety and character: Tucker can experiment and explore to his heart’s content, so long as he is careful (comparatively) and caring — meaning that he is a good person. Everything else is up for grabs — sometimes literally. “So when he was little, he understood that if he pulled the Christmas tree down, someone may get hurt,” Annmarie explained. “But when he wanted to take all the ornaments off the tree, line them up, and put them back the way he wanted, I let him. He was experimenting with his version of what a Christmas tree should look like. The same goes for dessert. He only gets it once a day, but if he wants it at breakfast, that’s fine. We have to suspend judgments about how things are supposed to be if we’re going to develop the capacities of children to be innovators as adults.”

Malcolm Campbell, a professor of biology who is director of the James G. Martin Genomics Program at Davidson College and father of two teenagers, said something similar. “I’ve learned how important it is to indulge your kids’ interests. If they want to wear polka dots and stripes together, that’s fine. If they want to paint with food, that’s fine, too — so long as they help with the cleanup afterwards.”

Semyon Dukach — a serial entrepreneur, angel investor, and chairman of Global Cycle Solutions, Jodie Wu’s company — talked about negotiating the boundaries between basic rules and letting his five children between the ages of three and seventeen “rebel.” “As a parent, what is most important is to respect your children and to listen, but not to be too free. There have to be limits, boundaries, structure. But too much of this — of teaching them to be obedient — can kill the creative impulse. The challenge is to balance respect for authority with constructive engagement and constructive rebellion — teaching your kids to be strong, but giving them the walls to push against. You can’t separate innovation from disobedience. But you can’t be an innovator and rob banks.”

Tony Wagner, author of Creating Innovators: The Making of Young People Who Will Change the World, is the first innovation education fellow at the Technology and Entrepreneurship Center at Harvard and the founder and former co-director of the Change Leadership Group at the Harvard Graduate School of Education. Wagner consults widely to public and independent schools and foundations around the country and has served as senior advisor to the Bill & Melinda Gates Foundation. A former high school teacher, K-8 principal, and university professor in teacher education, Wagner is a highly sought-after speaker and the author of four books, including The Global Achievement Gap. Please visit http://www.tonywagner.com and follow the author on Facebook and Twitter. Visit http://www.creatinginnovators.com, and follow on Facebook and Twitter.

Robert A. Compton (video collaboration) has produced eight feature-length documentary films on global education and innovation, including Two Million Minutes, Win in China, and The Finland Phenomenon. Prior to filmmaking, Compton had a successful twenty-five-year career as a venture capital investor and high-tech entrepreneur. For more information please visit http://2mminutes.com

Has this changed your thinking about your summer plans? What do you think now?