Lemons by Melissa Savage just went on sale this month. I’ve joined the blog tour to give you a glimpse at this warm-hearted coming of age chapter book. 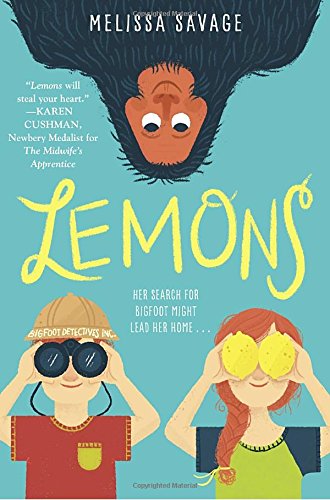 Lemons by Melissa Savage
Lemonade’s mama always told her to make lemonade out of lemons but it’s pretty darn hard when you’re mom has died and you’re stuck living in a small town with a grandfather you don’t know.

The town is unique –Willow Creek, California, the Bigfoot Capital of the World. Lemonade befriends a neighbor kid who is always hanging around. He’s a Bigfoot-obsessed boy named Tobin who owns his own Bigfoot Detectives agency.

The two friends spend the summer hunting Bigfoot, convincing Lemonade there just might be something to the stories after all.

When they find evidence of the beast, they confirm their findings with a scientist, and get featured on the news.

But they find more than Bigfoot. The duo discover where Tobin’s missing soldier father has gone. And Lemonade discovers that she’s coming to terms with her mother’s death more and getting used to living in her new home.

Lemons was written by Melissa Savage, a child and family therapist. She loves cryptozoology and the mystery of Bigfoot as well as issue-driven books.